Mrboots2u wrote:Instagram seems to be the portal for all scientific posts nowadays ...
Looking at that post , no reference are made to extraction yields, yet anecdotally they talk of the SSP extracting more.
Of course these things are always pretty subjective, but I find these insta bait posts a little loose in premise .
Talk of bitter in brews, we don't know if the stock and the v60 EY were vastly different or not. Perhaps that coffee used just isn't suitable for a higher EY threshold. For me there isn't enough detail to make head nor tails of the preference expressed.
Was it blind taste testing, among how many people?
It's fine fine to state preference as Joachim does, because in the end, that's all you can really say. I like .prefer this over this but that post also mixes some reference to objective data ( extracts more ) without telling us what it is. They are both aligned? To what tolerance? If you are going to say aligned then why not define if they are the same ?

I was just pointing out that a lot of things touted around as being all important (i.e. "maximum grind uniformity" or "higher EY is always better") don't seem to translate into cup and a lot of times these facts seem to contradict each other, for example SSP suggesting "lower unifomity" burrs for brewing.
Top

bettysnephew wrote:Really like the looks of the custom bean hopper. Is anyone making these now?

I got mine made here in China, if you want to use one of the taobao agents you can try there. Otherwise, I think Frank from Titus grinding has wonderful bean hoppers for sale but they might be on the pricy side.
Top

takethingsapart wrote:First post updated with info about the burr carrier from Titus which improves the alignment even more.

One thing that I think is really beneficial, though it's more work, is to do your sanding after having a carrier such as yours that you know is accurate and true.

I did a thorough chamber sanding after getting my Titus carrier (multiple 320 grit, then multiple 600, 1000, and finished with 1500). Running the alignment measuring tool around the stationary mount surface, I have less than 10 micron of play all around the grinder. Actually i'm not sure there's even 10 micron of play, I didn't see the needle move at all. Stellar results and closer than when I had initially done it with the stock carrier.
Top

franklin270h wrote:I have less than 1 micron of play all around the grinder.

You're correct. I forgot that the tool was in .01mm increments. Fixing above
Top

I'll sand it over the weekend! Thanks for the tip
Top

I was just pointing out that a lot of things touted around as being all important (i.e. "maximum grind uniformity" or "higher EY is always better") don't seem to translate into cup and a lot of times these facts seem to contradict each other, for example SSP suggesting "lower unifomity" burrs for brewing.

I think this is a good point to make and discuss. To most extents I do feel uniformity or unimodality are positives, for most every method of coffee brewing, but I think the issue is more that there are tradeoffs in order to get that uniformity.

My best stab at it, after looking into burr design more and more wanting to make some sense of it: In the case of SSP's High vs Low uniformity, it's a subtle difference really rather than massive. The design actually makes the "Lows" more similar to what would be a machined version of Mahlkonig coffee burrs. It's basically the high uniformity burr with a larger outfall depth. On that last finishing stage, the triangular shaped flat section that's milled down, and the channel they're crushing into? The low uniformity ones are deeper.(image taken from espressotool website) 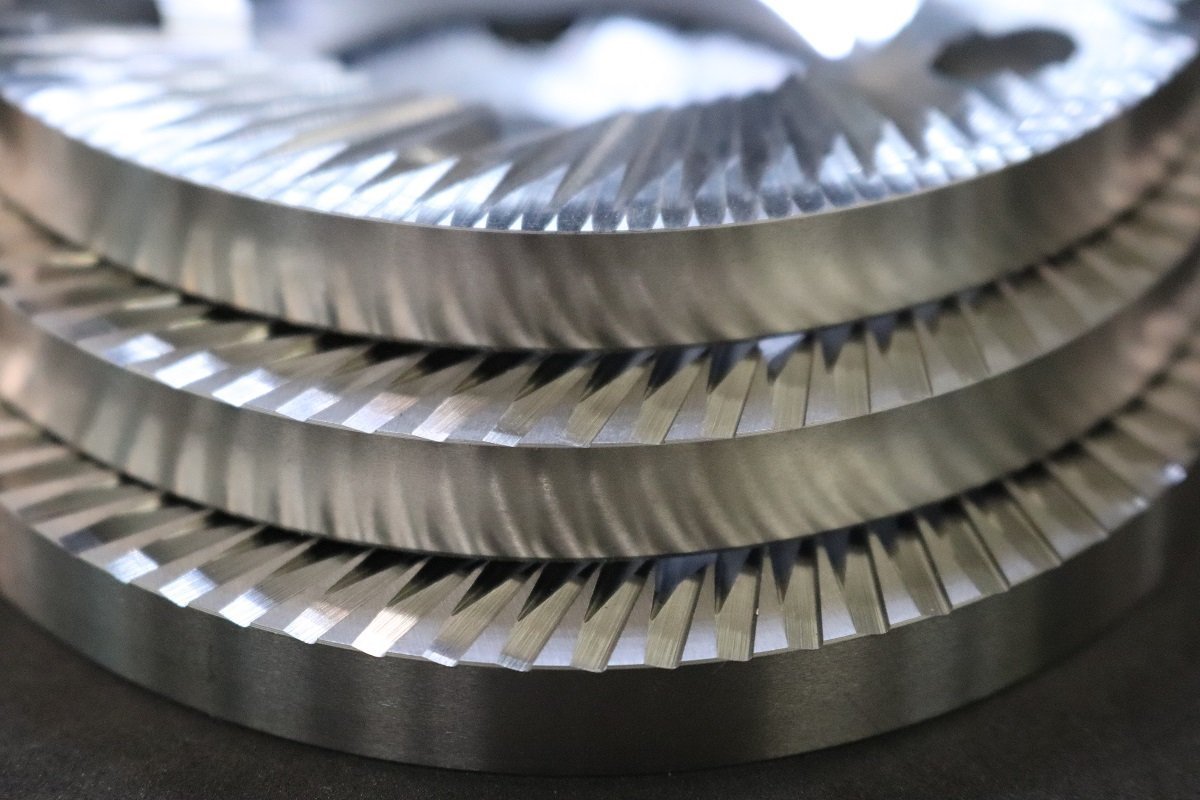 The High Uniformity are in the middle and the Low Uniformity on the bottom of those burrs stacked on top of each other. Both are a similar design, the last section crushes coffee into a channel to escape from just like the stock Mahlkonig burrs do. With the deeper groove in that last tertiary stage of the burrs, it allows for a slightly broader spread of fine/coarse particles to escape as far as a ratio goes. It's not at all bimodal or a huge particle spread like an espresso burr or conical would be. Nothing at all that dramatic.

What it's designed to do at least, similar to MK's coffee burrs, is allow a broader tolerance for particles to pass through, so relative to a turkish or espresso style there are fewer crushing actions need to happen overall before particles get slung out of the edges of the burr. That generally means coffee gets ground faster, less heat, potentially fewer fines, less load on the motor. High uniformity ones comparatively create a very tight, compressed finishing section that even when set to a coarse dial setting still is meant to brute force a tight particle spread by giving basically no room for a particle larger than "x" to even slip through before getting crushed down to a smaller size. That's why those burrs hardly ever spit out a boulder. But it also creates the potential for more heat and more fines produced.

As far as if the lows are extremely good? A friend with both high and low uniformity and 100% prefers the lows for filter use. In case of Mahlkonig burrs the old style coffee burrs, which have the deepest outfall and smallest flat finishing section, seem pretty universally preferred for filter over all other MK EK options and most SSP options. There's certainly something to it, but I can't say whether it's sediment and fines in the cup perhaps, which would maybe increase perceived astringency when trying to push EYs higher? Or it could be heat during grinding, flow rate or slower brew times or even solubility and particle shape. There's certainly a reason but I can't say which one it is definitively. On the more extreme other end, things like conicals generally have a broader particle distribution and most people find big unimodal flats to produce much better filter coffee (and espresso is trending that way too), so a super wide or even bimodal particle spread certainly isn't the answer either for filter coffee by any means.
Top

And then there's the "low fines" version, I don't know where that fits in the picture. SSP themselves recommend "low uniformity" for brewing and "low fines" for cupping, but not strictly brewing?

I had the ultra low fines version, for a while then traded them to a friend that wanted to try them. I found them a little odd and kind of wonder why they even exist, to be completely honest. I'd call the low uniformity the best SSP option for filter/cupping from all i've seen. I wasn't getting great filter results from the ultra lows. They do have super shallow teeth and actually can pretty easily go just as fine as high uniformity burrs, as far as espresso or near-turkish goes.

And yes, IDK if the extraction characteristics would be called the same, but you can make up for some of the difference simply by grinding coarse since coarse particles are inherently less uniform. It's not quite the same as a burr with a broader spread, but it works pretty well. The differences aren't huge between them anyway
Top

Thanks for the updates on this! I purchased a used EK last year and I've been struggling to align it. you've convinced me to give the "sandpaper" method a shot next.

I also purchased "Gorrilla Gear" burrs "Gorilla Gear Black Burrs - 2,500 - 3,000 HV"
as I could just afford them and thought it might solve my problem. It did not.

I've spent over 8 hours adding over 15 slivers of aluminum foil to the burrs and I'm now happy to try the sandpaper method.

I am curious about the TITUS burr carrier as I wonder if mine might be my current problem, but.. we'll see.
Top
← Back •
By accessing this site, you agree to the site's terms of service. If you need help with the site, please contact us.