bakafish wrote:May I ask why you put the PEAK burrs into the KF804? Is the PEAK not suitable for pour over?

On the contrary, the PEAK burrs make amazing pour overs, in addition to pulling amazing espresso shots! Using a kalita wave, there was a lot of sweetness, flavor clarity, and a noticeably viscous, juicy mouthfeel that wasn't as present when I used the Ditting machined burrs. I don't entirely recall the EK having that kind of mouthfeel, but I could just be misremembering...

I don't have the $$$ to buy a new Ditting Lab Sweet grinder right now but from pictures, the PEAK burrs appear identical to the lab sweet burrs, so I thought I'd do a test to see what those burrs could do for pour-over, cold brew, and Kyoto drip. Nancy from Ditting USA says she has Lab sweet burrs on order so I plan on buying a set when they are available.
Top

Sorry for my poor English. I meant why didn't you use PEAK for pour over directly but installed its burrs on KF804?
Top

Hey no worries, now I understand your question. I change coffees often and haven't had good experience single dosing with the K30 or PEAK. Those grinders seem to perform better with a full hopper. The Ditting design works much better for single dosing.
Top

I just add a photo of the bottom burr in the opening. The flat triangle areas are smaller.
Top

The new Lab Sweet burr sounds interesting but I wonder how much improvement over the old cast burr. The machining seeems to be very close.

The Peak burr is out of question since they priced it more than the EK43 burr. 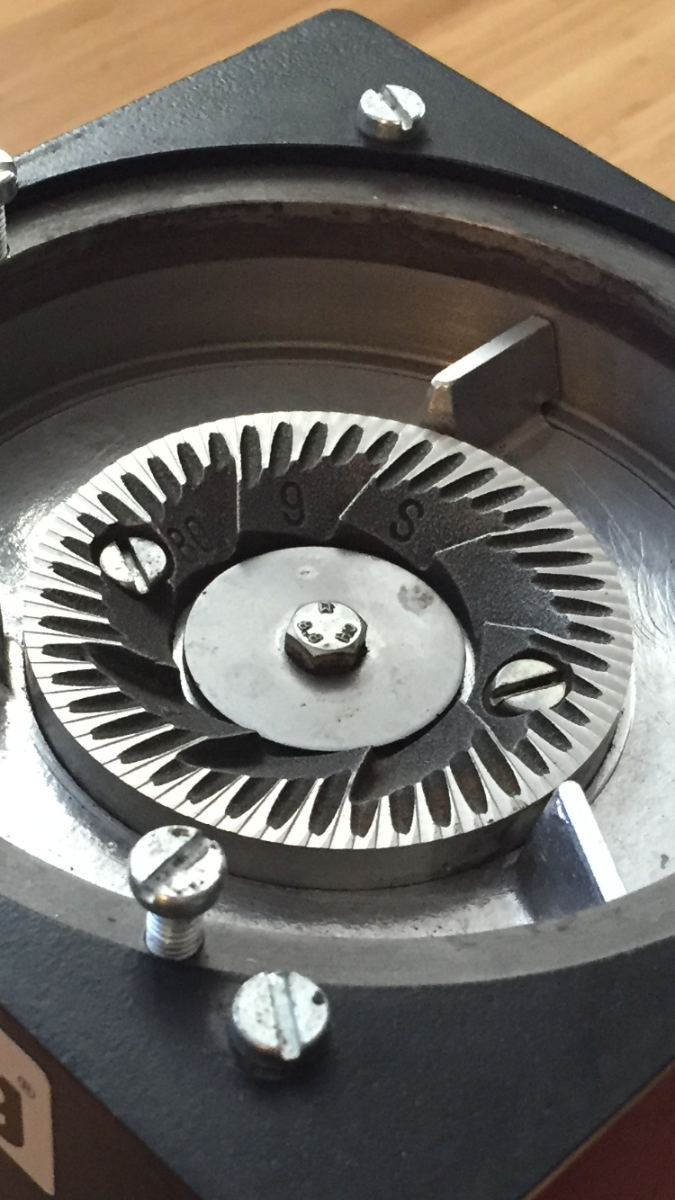 I have none of these grinders or burrs, but reading it makes me wonder why a cast burr would be any different than a machined burr, given that at the end the cutting surfaces themselves must be machined or produced on the same equipment, no?
Top

When the Peak was being developed one of the people involved was discussing the chosen burrs and said something like they had tried lots of different profiles for ground steel burrs when someone pulled out a very old cast burr for a discontinued grinder and it gave the best results so they used those old cast burrs. At least that's what I remember.

The new Lab Sweet burr sounds interesting but I wonder how much improvement over the old cast burr. The machining seeems to be very close.

The Peak burr is out of question since they priced it more than the EK43 burr.

I never had a chance to try the old Ditting cast burr but I can say that the new PEAK style cast burr which looks extremely similar to the Lab Sweet, is phenomenal. The PEAK burrs produce amazing espresso, and so far amazing filter coffee. I made an Oji/Kyoto drip of the Onyx Cold Brew blend using the Peak burrs which tasted unbelievably sweet, juicy, soft, and complex. 10:1 ratio, same grind size as I use for a Kalita. I'm talking rich dates, cocoa, hints of citrus, and pecans. I took a sip and sat there just staring at the cup wondering what the hell I was drinking. I had made a batch of the same coffee with the same recipe using the Ditting machined burrs, and while those flavor notes were present and the coffee tasted good, it was sharper and didn't seem as rich or excite me in nearly the same way.

I realize that tasting notes and flavor descriptors can be tricky and are subject to bias, but I have to convey the joy and excitement I had in drinking the coffee made with the PEAK burrs. I might be crazy but I think I'm in love.
Top

How is retention of the Peak?
Top
← Back •
By accessing this site, you agree to the site's terms of service. If you need help with the site, please contact us.