What exactly is JohnB's mod? Is there a link to it?

Somewhere I saw a post that said JohnB sent someone a modified chute, but haven't seen any details on it. I've also seen a picture of a K10 chute with the narrow plastic strip above the opening cut back, probably with a dremel tool. This looks like a fairly easy mod that might be useful for being able to see further into the chute to sweep it out. But near as I can tell it wouldn't reduce retention.

There is nothing complicated about the chute mods I did but they do improve access & help with grounds retention. Cutting away the upper edge (strip) gives much better access & removing the entire raised "step" molded inside the chute allows the grounds to flow through quicker & they don't pack in as densely. With the stock chute the grounds drop from the metal portion of the chute into the wide part of the plastic extension, immediately hit the step & start backing up. You end up with more grounds in the chute & the burr chamber.
It's not a great photo but this shows the modified plastic chute which is now smooth from the metal portion to the outer edge. I also added a piece of sticky back velcro to the under side of the metal chute to close the gap between the two chute sections as grounds could easily fall down into the motor area. 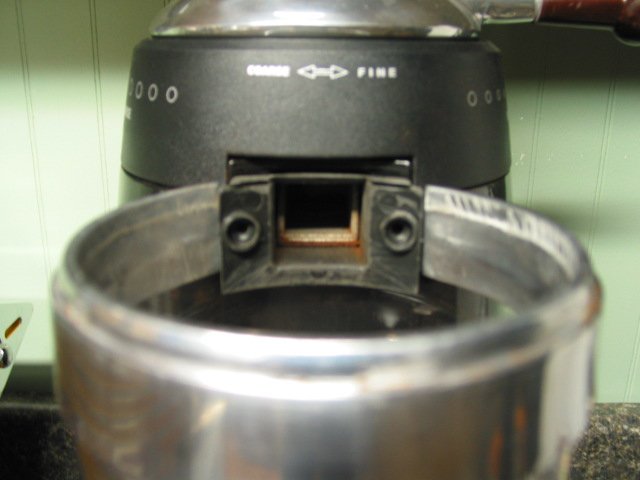 I modded mine just like john's. Easy to do and a necessary improvement.
Top

Brian, fyi, the Major doserless is terrible at grinds distribution, so unless you plan on using the weiss method, I would go with the k10 or a standard Major with the doser.

jammin wrote:I modded mine just like jon's. Easy to do and a necessary improvement.

Javacat wrote:Brian, fyi, the Major doserless is terrible at grinds distribution, so unless you plan on using the weiss method, I would go with the k10 or a standard Major with the doser.

Is this from personal experience with the Major-E? Cheers, Chris
Top

You are only modifying an easily removed plastic section. These cost $11 U.S. (part# K00008N.) so I bought a couple to play with & have the original chute in a drawer. I can't imagine this being an issue but if you needed to return the grinder for service you could reinstall the original piece in about 2 minutes. I did mention my plans to Josh @ Compak USA when I was looking for the part number & he didn't say anything that would indicate the mod might be a warranty problem.
LMWDP 267
Top

I did remove it on all 4 sides using several different hand files. I removed all file marks using 180/320/600Grt wet sandpaper.
LMWDP 267
Top

Thanks for the mod info. Where did you get your spare chutes?
Top
← Back •
By accessing this site, you agree to the site's terms of service. If you need help with the site, please contact us.