Grinders are one of the keys to exceptional espresso. Discuss them here.
← Back to Grinders • 35 posts •

Same thing here in the states, chap stick. I believe most of these are composed of a wax, like beeswax, or another waxy substance. I never thought about trying bees wax. I have a big lump in the garage if I can find it. I use to use it to wax bow strings (bow and arrow). A very, very tiny amount may work good. I do not believe it attracts dust and grit like a petroleum or petroleum like lubricant does. It is more like a dry film lubricant than wet lube.
Dave Stephens
Top

cannonfodder wrote:I do not believe it attracts dust and grit like a petroleum or petroleum like lubricant does. It is more like a dry film lubricant than wet lube.

Once you find the lump of beeswax in the garage, and get all the dust and goo that's stuck to it off the lump, let us know if you feel the same way. Maybe it's just the desert dust around here, but it's just as fond of the wax as it is of the petroleum based lubes. Could be the temperature, as well. Wax is more often a semi-liquid here in Tucson!

Espresso Sniper
One Shot, One Kill

I read this thread a year ago and I thought "boy with my luck I'd cross thread something trying to get it back together" If that happened I'd have to go and buy a Robur or something as a replacement...

FWIW, my grinder is about a year old and is a Mini-E (type A). I've used Grindz twice a month faithfully (grinding usage = 4-6 lbs. a month).

I re-read this post a few days ago and saw Karl's success and thought why not give it a go myself? So with HB instructions in hand...

As others have said, this turned out to be such an easy task you'll wonder why you ever balked at tearing the grinder down for cleaning before. If this is a 10 minute job, that's only because 9 of those 10 minutes are spent cleaning the burr carriers. Dis-assembly and assembly turned out to be a piece-of-cake.

Even though I've used Grindz as stated above, I still had a bunch of stale old coffee packed into the "corners" of the upper and lower carriers; particularly around, along and below the ejector vanes and in the screw recesses.

A stiff nylon bristle brush and my shop vac made quick work of this. (Anyone use a soft metal brush, such as one with brass bristles for cleaning the burrs?)

First time I've had it apart in about a year of ownership and Mazzer had gobs of white grease on the threads and smeared around on the inner collar. Hmmm, Cannonfodder was right about too much goop! This was cleaned up. I didn't re-lube anything.

The thing that intimidated me the most was the thought of trying to get it all re-threaded again while under spring pressure, as I would have to apply downward pressure in the throat while trying to screw everything back together etc. You know, strip the threads and have to buy the aforementioned Robur... At least for me, it turned out to be a non-issue. On my grinder there is enough "slack" in the threading so that I could get the threads started easily without much downward pressure (if any at all) before it then started to tension the springs.

I tried this several times just to be sure it wasn't a fluke and each time it was the same. As Dan said, spin the collar CW (loosening) until you feel the threads drop firmly into place and then reverse direction (CCW) to tighten it up. There is a fairly obvious "click" when the threads drop and engage.

I also spun the collar around to different points to try and get the threading to start at a different position than the collar removal mark that HB suggested but I couldn't find any other spot where the threads would engage. There seemed to be only one point where threading would start (which then always took me back to the original zero point for the burrs- Wow!). So I'll probably skip this collar mark step next time.

Lastly, I made a mental note where the hopper lock screw hole was in the upper carrier throat (even though I've long since removed the screw to facilitate a quick hopper off for cleaning) so I would mount the equidistant upper burr carrier studs in their original position (if this matters).

The only other thing I would throw out is that I've had to take the push button DL "lid" of my type A apart on a couple of occasions as the vibration from the grinder seems to eventually rattle loose the little hex nuts that hold the inner circuit board in place. They then rattle around inside the lid when I grind.

Two Phillips screws out and apart it comes. Even though a rubber O-ring seats the lid halves, it was surprising to me at first how much espresso dust wiggled in there as well-

Cleaning the Mini turned out to be such a simple job that I'll probably skip Grindz in the future and manually clean my grinder every few weeks instead.

Now for the best part- the shots I pulled after this thorough cleaning were some of the best I've had in a while!

Thanks for this thread guys!
Top

Wow! That was easy, and there was an immediate difference in the taste of my shots! Thanks so much for that post. I had just ordered some Urnex Grindz right before I read this post. I guess I'll keep the Grindz on hand for occasional maintenance, but this was so easy, I imagine I'll just do this once a quarter, and do the Grindz during the other two moths. So easy to do...!
Top

I live in Hong Kong and purchased my Mazzer Mini more than a year ago overseas. When it arrived, I tried it once but the grind seemed to be very coarse and it was not possible to get a finer grind. I thought that I needed to carry out initial adjustments before using, to I disassembled the burr carrier. Ever since then I have not been able to get it back together and working properly.

Following the instructions on this page I can get the upper burr carrier and collar in position and rotate the collar counter-clockwise but there is a great deal of resistance about 1/3-1/2 way down the collar. I am not sure if it is meant to go all the way down, and I did not want to cross-thread the collar by forcing it. When can get the collar more than 1/2 way down and try and use the grinder it will grind a couple of beans and then stop, making a clicking sound but the burr will not move. When I clean it out it starts working again.

I would have just taken it in to be professionally adjusted but I don't think there is an agent in Hong Kong.

Any hints or suggestions would be greatly appreciated.
Top

javahk wrote:Following the instructions on this page I can get the upper burr carrier and collar in position and rotate the collar counter-clockwise but there is a great deal of resistance about 1/3-1/2 way down the collar. I am not sure if it is meant to go all the way down, and I did not want to cross-thread the collar by forcing it.

It sounds like either the threads are clogged with dirt, or you're cross threading. As a test, try threading the collar without the top burr carrier in place. Since the threads are not under tension from the three springs below, the collar should offer little resistance. To avoid cross threading, slowly rotate the collar clockwise while holding it perfectly level until you feel it drop into the first thread, then rotate counter-clockwise. 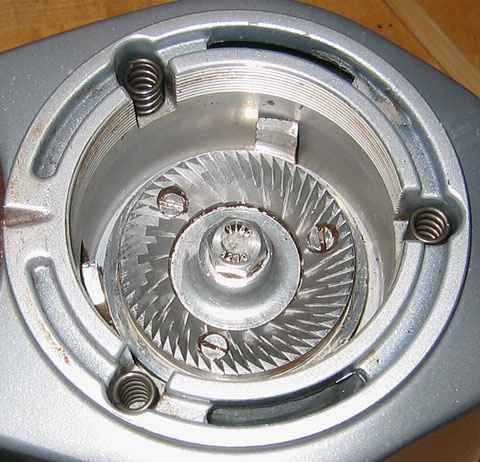 Thanks for the tip. I did try without the top burr carrier in place without any luck. There is quite a bit of resistance at about 3-4 turns. I'll try again later to see if it has something to do with my lack of technique, but I don't think so. I hope I don't have an expensive Italian paperweight on my hands...
Top

I decided to give cleaning the Mazzer Mini E type A a try after 6 months and reading this thread. I'm trying to turn CCW after I see it drop but am only able to turn it about 3 full turns. I should have looked more closely before I took it apart but should you be able to see any threads when looking from the side? It gets tight when there are about 3 threads visible from the side. I hope I didn't mess it up. Thanks.

dsm363 wrote:I should have looked more closely before I took it apart but should you be able to see any threads when looking from the side?

Remember it's reverse threaded, i.e., clockwise = loosen. I just checked and the burrs touch when there's barely a thread showing when looking from the side. A little more than a thread is showing when I turn the collar to the "start here" sticker. It sounds like you are fine, if it was cross threaded, the collar would have bound immediately. Back off the setting, turn on the motor, then slowly make the adjustment finer; do you hear the burrs "chirping" as they touch? If so, the "start here" sticker should be approximately 1/4 turn away.
Dan Kehn
Top

It's weird, even when I take the springs out and place the upper burr in, there's still a large gap between upper and lower burrs (~1/3"). For some reason, the burrs don't come close to touching. I can screw the ring all the way down with the top burr out but not with it in place (so the threads seem fine). I don't think I'm missing any parts. Any ideas? Thanks. I'd love to get this thing back together and not have to ship it out.

edit:
OK, I think it may be ok. When I turn it on and adjust just a touch, I hear the burrs touch. I think it may have been clogging up before because I was just dumping beans in then trying to grind. Are you supposed to turn the grinder on then add the beans from the hopper?

The problem seems to be that when I turn the grinder on, no grinds come out and the motor shuts itself off after 10 sec with grinds getting compacted around the sides of the bottom burr. I'll have to see if the internal chute is clogged. Thanks.
Top
← Back • 35 posts •
Sponsored by La Marzocco · Home