Can running a grinder without beans damage it?

my wife and I are having a debate. we use a MACAP M4 grinder. we removed the hopper and only put in the amount of beans that we're going to grind for a shot.

my wife is careful to shut off the grinder as soon as the last bean is ground. I am not so careful and let it run for a few seconds while I'm sweeping out the last few grams of ground coffee from the output shoot with a small brush.

my wife thinks that i'm damaging the grinder by running it without beans. she thinks that the motor is not designed to run without a load and that there is a chance that the burrs will be damaged.

i, on the other hand, don't think it matters. i don't think the motor cares whether it runs without a load for a few seconds and without beans, as long as i'm not grinding at the finest setting, will not come in contact with each other and therefore can not damage each other.

anyone have an opinion?
Top

I hesitate to enter into a domestic dispute, but I'm with you: It doesn't matter. Letting the motor run for an extended period (empty or not) will overheat it, but a few seconds doesn't hurt anything. Technically, moving the adjustment finer until the burrs briefly touch while the motor is running doesn't risk damaging them either since they have parallel flat faces with cutting edges sloping downward towards the center; this maneuver is a common way of finding the so-called "zero point." 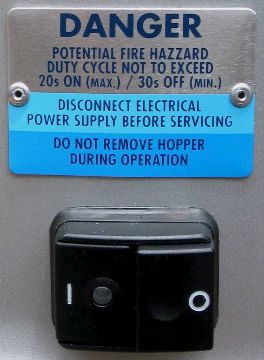 Commercial grinders have overheating protection. I got very lucky -- I left the mini motor running and when I got back several hours later, the grinder was off and too hot to touch. I thought I had a major repair or at least disassembly job and thermal link replacement on my plate. Instead, once the thing had cooled off, it ran quite normally -- the thermal protection is a thermostat that resets automatically when the unit is switched off. Very thoughtful of Mazzer, very lucky for me. The Macap will be protected; but I don't know if it's as cadillac-automatic as the mazzer's, or whether they'll make you jump through a hoop or two to make sure you never forget to turn it off again.
Top
← Back
By accessing this site, you agree to the site's terms of service. If you need help with the site, please contact us.