Happy new year to everybody in here,

Before getting a new burr set by a cheaper supplier, it is worth thinking about buying the original one by Mazzer and paying more than twice the price of the Italmill burrs.
The difference in quality is shown in the price (this time at least).
Both are 83mm 3 phase.
Left Mazzer right Italmill 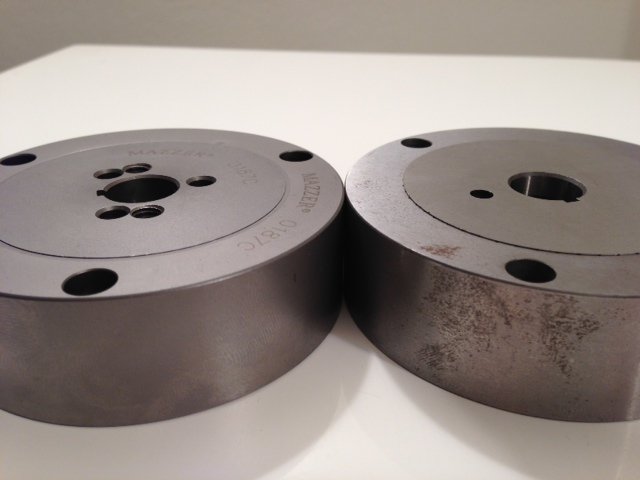 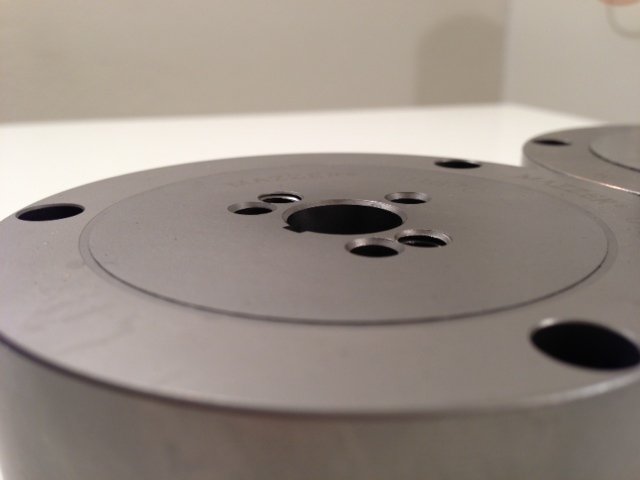 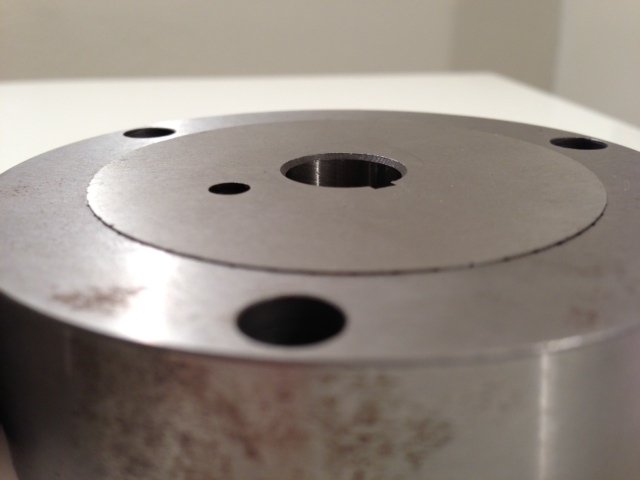 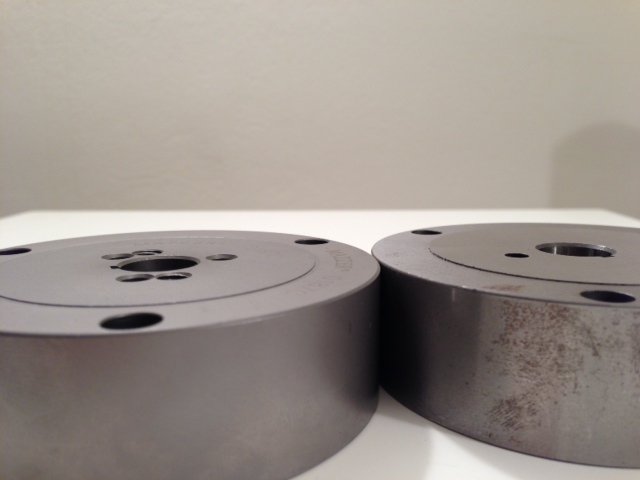 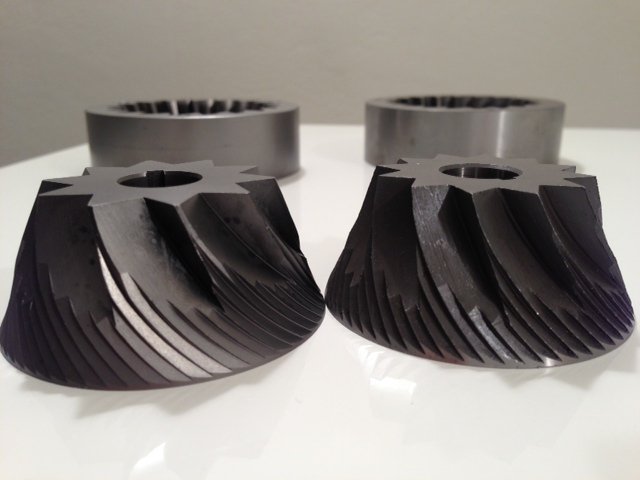 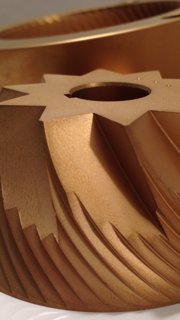 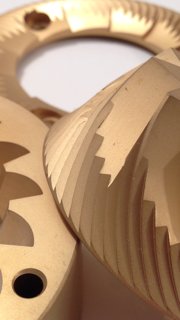 There is a roughly 33% diffenece in the grind path length. The Italmill burr has 12 facets, and the burrs do not quite twist all the way between facets, so their length is maybe 1/15th of a turn. The Mazzer burrs have 10 factes and the burrs twist a full division, so roughly 1/10th turn.

My instinct is that longer grind paths, rahter than burr diameter is what leads to greater grind quality. For instance, the little Vario has a tiny 50mm flat burr, but because the burrs are so strongly angled, the grind path length is similar to a Jolly. The grind quality is also more like the Jolly's than the Mini's

Based on this, I would avoid the Italmill burr unless it passes a stringent taste test.
Jim Schulman
Top

I don't think that would be a correct estimation. The scissoring action of the ridges on the burrs force the bean to break and move straight downwards. The path travelled by the bean is not a function of ridge angle or twist, just the length of the straight-down path. 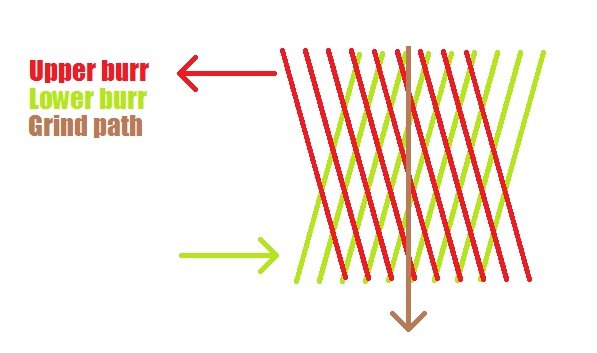 I also might add that while the Baratza Vario has apparently great performance for the burr diameter, so does the Mahlkoenig K30, and those burrs are not angled. It would appear that Mahlkoenig knows stuff about burrs that Italmill and Mazzer do not. It also appears that the added R&D expense and added manufacturing precision do not offer any real benefit over just using bigger burrs.
LMWDP #232
"Though I Fly Through the Valley of Death I Shall Fear No Evil For I am at 80,000 Feet and Climbing."
Top

You are right about the scissoring, but there is a mistake in the analysis of grind speed ....

The burrs do indeed scissor, and the travel direction is completely radial. But now consider the scissoring point, where the burrs cross. The rate at which this point travels outwards depends on the angle of the burr. If the burr is perfectly vertical, the point would travel at infinite velocity and the grinder would require infinite power (or simply lock up in the real world). At any other angle, the disk ihas to rotate a certain angle for the crossover point to travel from center to diameter. The more angled the burr, the more the disk has to rotate, and the more slowly the coffee travels.

However, I was wrong when I talked about the length of the grind path; I should have said grind speed. Sorry to get so geeky
Jim Schulman
Top

I think many of us agree that one of the most important utensils for the preparation of espresso is the
coffee grinder.
Many baristas account the grinder to be even more important than the espresso machine, because ,errors which are caused during grinding cannot be compensated with machines employing the most sophisticated technology.
Therefore, the grinder and the grinding process should be given the maximum attention during the preparation of espresso and so do the burrs.


Bluecold wrote: It would appear that Mahlkoenig knows stuff about burrs that Italmill and Mazzer do not. It also appears that the added R&D expense and added manufacturing precision do not offer any real benefit over just using bigger burrs.

The quality of MK burrs are another world. I have to admit that I am not a big fan of Mahlkönig but they produce their own burrs under a high quality management on eroding and milling machines.

I cannot say if their R&D expense is much higher than Mazzer's at least MK is much more transparent with showing their results and they have to if they want to keep their progressive sponsor monopoly.

Important for the fine degree of grinding setting for espresso is the correct
distribution of particle sizes, i.e. the different sizes of the ground coffee bean
particles, also known in the trade as "particle size distribution". For the
preparation of espresso it is important that the ground coffee is not
homogeneous, but rather contains different particle sizes. An ideal
distribution contains a certain number of the smallest dust-sized, medium,
and coarser particles. From this distribution an average value is calculated,
the so-called median, which is important for the extraction. Particularly
relevant are the smallest dust particles, also known as "ultra-fines", which lie
in the size range of 20 μm. As rule of thumb the following can be noted: the
more pressure required for the preparation, the more ultra fines the ground
stock should contain. These fine particles settle between the larger particles,
close gaps and thus consolidate the coffee "cake" through which the water is
pressed. Ideally, the median sizes for espresso range between 200-240 μm.
It is only within this size range that the grains can lie together optimally with
later tamping (pressing together). Compaction of the ground coffee in the
portafilter through even tamping and the smoothing of the surface are
particularly important for the infusion process.

My instinct is that longer grind paths, rather than burr diameter is what leads to greater grind quality.

It has long interested me that we don't seem to know (or at least I have not read) what exactly it is that makes a great-quality grind. JimS is our HB expert, and he is still relying on instinct. I think I've read that one of the key factors of the Titans is their consistency and ease and repeatability of adjustment. But what is it about the grind quality that makes espresso taste good, and how do these burrs do such a good job of it?

Since conical burrs have been around for a long time, haven't the manufacturers done some assessments of how their design influences the grind quality? You mention MK making quality burrs - don't they have a specific grind result in mind when the design the burrs? What are their criteria? Shape of grinds, grind size distributions, etc? I did a quick search on google scholar - seems plenty of people are patenting burr grinders, but I did not find any reports of grind quality assessemnt.
LMWDP #049
Hand-ground, hand-pulled: "hands down.."
Top

Friggin' hell that is a massive difference. I've had no idea that the Mazzer burr set is so much better. I guess I will have to cough up some monies and get a genuine 71mm burr set.

Thanks for the photos Frank!

From an appearance standpoint, you're right, Tom.

But, unless one holds the actual manufacturing drawings in one hand and the specimen burr sets in the other, it (that conclusion) would not pass muster. You would also need more specialized QC checking equipment than is available to the normal person, not to mention the tracible origin of the products being tested.

Italmill has supplied burr sets to Mazzer in the past - at least Roeland has said or implied that in posts to James Hoffman's blog several years ago and I obviously defer to Roeland on that one.

It would appear that Mahlkoenig knows stuff about burrs that Italmill and Mazzer do not.

I would say that any one of these three knows stuff about burrs that the other two would pay dearly for and we, the end users, are reaping the benefits of these inquisitive minds.
Skål,

It would appear that Mahlkoenig knows stuff about burrs that Italmill and Mazzer do not.


I would say that any one of these three knows stuff about burrs that the other two would pay dearly for and we, the end users, are reaping the benefits of these inquisitive minds.

I am not, to date, fortunate enough to be a user of any of these burr sets. But I would certainly like to hear more about the specifics (i.e. grind quality parameters) that these inquisitive minds are pursuing in their R&D efforts.
LMWDP #049
Hand-ground, hand-pulled: "hands down.."
Top
← Back •
By accessing this site, you agree to the site's terms of service.