If you email Baratza support they should quote you the parts for $50 plus shipping.

That is a good question though, I am not sure, do the new Varios come with a metal grind chamber already? That would be great if they do
Top

I am in Canada so Baratza won't change my grind chamber to a metal one in their shop (due to customs fees etc), but they do sell the parts for it if I want to try doing it at home.

I am planning to put in metal burrs and do the alignment on my new Vario..

How involved is it to switch the grind chamber while I am at it? I am debating whether it is worth the additonal cost and effort, if I will get fairly good alignment with the stock plastic grinding chamber anyways.

It depends on your level of mechanical aptitude, but swapping the grind chamber is more or less trivial once the grind assembly has been removed from the top casing.

I will have some updated guidance on performing the alignment based on some recent learnings that I will share soon. Basically, you don't have to (and nor should you) remove the grind assembly from the top casing to get excellent results, and get them more quickly.

The TLDR version is to just remove the top casing and necessary wires to separate the grinding portion of the grinder from the base and then set that whole assembly upside down and work from there. You can access the four screws that secure the grind chamber to the motor plate without removing anything from the top casing. This allows you to move the levers and have the spring detents hold them in place while you loosen and tighten the grind chamber screws. The detents act like an extra set of hands and make the alignment easier to perform and remove potential variables from the process. I brought the burrs into contact to the point where I could grasp the drive pulley and spin with moderate effort due to friction between the burrs with the levers and then used the calibration screw to maintain that amount of contact after loosening the grind chamber screws and while gently securing them during the alignment.

I spent a fair amount of time recently with the alignment process and was greatly annoyed that it would seem great at first and then I'd have a poor ink pattern after assembly. I still can't explain why, but leaving everything assembled and using the method above took care of the problem and I think it is big enough improvement in the process that I felt compelled to share and recommend the approach going forward.

Hi Jake,
Thanks for the updated instructions. I followed your last video and instructions and with a few hiccups got to decent results. I'm tempted to try again with this revised method. Are you thinking of doing another video? I found following along with the video was really helpful. Thanks again for your efforts!
Jim
Top

Yes, if you could post pictures or a video outlining the steps, that would be wonderful! I am a computer engineer, decently mechanically inclined, but not one of those super-handy types. There is a reason I went into computers instead of the mechanical specialization lol

So just a quick update, I have the older (first gen?) Vario (similar to pcrussel50). It threw out a ton of fines before this mod.

I purchased the upper threaded burr carrier and metal chamber from Baratza (had to email them).

Had a heck of time trying to get an even wear pattern despite jake_g's superb instructions.

I found a tip buried in another thread that helped me immensely. Loosen both the motor screws, adjust both these in red and blue all the way up so that the LBC touches the upper with little lever pressure needed. The screw in the red circle was pushed all the way up, and the screw in blue was adjusted all the way in.

With these screw adjustments, I was able to easily apply enough pressure to the lever arms while tightening up the chamber screws so that the wear was extremely even. I tightened the motor screws last.

This made a huge difference to my pour overs as we were getting many fines with the vario before adjustment (despite having the metal burrs).


I'd say this is a might do mod. Thanks again Jake and pcrussel for OP.! 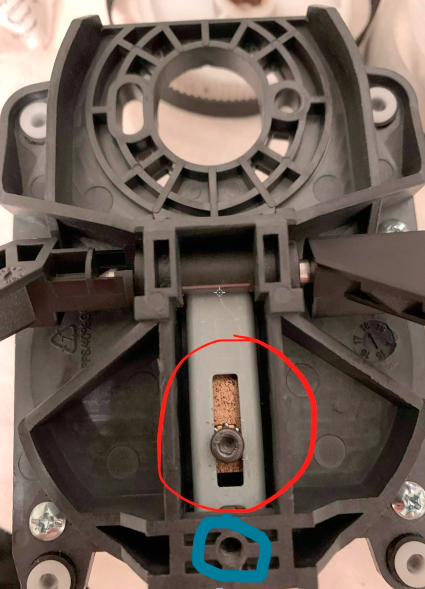