The Alicorn: Achieving Precision Alignment with the Baratza Forté/Vario - Page 12

Thanks guys! You guys are heroes, I dont even know what I did fully because I do not have the knowledge, skills or equipment to verify the output or compare it to the best in the market like Monolith or EK43, but I can see that my grinds are fluffier, more uniform, I mean its a new machine now.

I have some stuff to report back and some questions. Putting this puppy back together was a pain in the a$$...For some reason everytime I tried, the coarse adjustment lever would lock out the burrs at level 3 instead of going all the way to 1. I couldnt figure this out, I had to fiddle with the fine adjustment screw and that Hex screw on the brass plate/cantilever thing (loosen it and move it around a bit) until I could move both adjustment levers up and down freely, I had to keep checking that motion throughout each step of putting it back together, and finally it could work at 3am and I passed out exhausted. What a great DIY project, this is the way to pass quarantine guys haha.

Then I calibrated to 2Q to the best of my abilities this morning - its always scary for me, I imagine ceramic burr to burr contact and shudder at the thought. Here is the question: pre-Alicorn,when I was calibrated (...ish), a light coffee would be dialed in at 2E. Now, post Alicorn, calibrated (...ish) at 2Q, I mean the grinder is choking my Gaggia at ANYTHING "2". I had to go down to 3O to get a 2:1 30 sec extraction on a light roast.

Is this expected? Insights welcome. I am also talking to baratza about this and can report back but I suspect you guys now rival those guys haha.

Second question Are these the parts to get, in my vario, for world class espresso grinding to upgrade it? Metal Forte burr chamber and screw-down upper burr carrier. What about lower burr carrier?
Top

sheedapistawl wrote:
Then I calibrated to 2Q to the best of my abilities this morning - its always scary for me, I imagine ceramic burr to burr contact and shudder at the thought. Here is the question: pre-Alicorn,when I was calibrated (...ish), a light coffee would be dialed in at 2E. Now, post Alicorn, calibrated (...ish) at 2Q, I mean the grinder is choking my Gaggia at ANYTHING "2". I had to go down to 3O to get a 2:1 30 sec extraction on a light roast.

Is this expected? Insights welcome. I am also talking to baratza about this and can report back but I suspect you guys now rival those guys haha.

I'm not the person to answer your second question, but this is normal. Your overall grind distribution is much finer because you're no longer getting the big pieces escaping the wide side of your burr set. If you looked at a graph of your grind distribution before and after, you'd now have a much higher peak at your selected grind size. You still have fines and boulders, but likely fewer of both. This is a clear sign of an improved alignment.
Top

So I saw the post on reddit about this, so dusted off my vario to try it. First attempt was fiddly, and didn't see any decent results. I was too lazy to strip it down as far as disconnecting the adjustment levers from the faceplate, but I don't think it matters much and you just lose sensitivity or "feel" of the burrs touching due to the detents.

I tried a few more times with a variety of adjusting the calibration screw, this and that, then realized the lower burr carrier floats when it's still connected to the body of the grinder. Conveniently, I had a spacer that fit in the grind chamber so the lower burr carrier was "loaded" and the weight of everything above it (when flipped upside down) was applied and keeping weight on it so it was no longer floating.

I get the analogy of the disc brakes on a bike, but here, things don't add up. In the bike brakes setup, you have two "floating" elements and you're trying to center them; the pistons engage equally when the brake lever is pressed, so it should roughly center them. In this case, the lower burr is constrained on its axis by the main shaft. Given minimal play, there's nothing to align here. Now you take the upper burr carrier and it's fixed, literally, it doesn't move. So given your upper burr is planar in the upper carrier and the carrier is planar to the lower burr carrier, again, nothing that this method is aligning.

I'm not arguing with the results, I just don't see where the alignment occurs.

Please show me the way, if there is one. Maybe I'll reproduce it all in a 3d model for discussion purposes?

Anyway, after taking it apart about a dozen times, I think I'm a certified Vario Inspection Personnel (VIP), I stripped it to the level in the video, did exactly as described, multiple times, with no change in result. That's when I stripped it down to the bare bones lower burr and carrier with chamber and upper burr and carrier. By locking the upper burr in place, then applying axial pressure while rotating with my fingers, the marker test repeatedly showed no improvement. I tried rotating the burrs to see if it was a burr issue, nope, same location would be clean regardless how burrs were rotated. Tried rotating the upper carrier, nothing either. That means the upper carrier burr mating surface is not coplanar or the mating surface of the upper carrier to the grind chamber is not coplanar. I shimmed the upper burr till the results were good.

This thread did motivate me to align the burrs on my vario and I must say, although I took an approach that I wouldn't want to repeat, I must say, the results in the cup are outstanding in comparison to before the alignment.

Furthermore, after reassembly when I went to dial in, first shot was 18g in, 36 out, 27s. Pour was beauty and tasted great. I was rewarded by the coffee gods for my effort and they at least didn't make dialing in a pain.

Thanks for the posts.

edit:
See images for components and their connections that I'm referring to.
The thread is talking about aligning part 7 to 24, but the burr alignment is affected by 1, 3, 3, 4, 5, and 7. How 7 is connected to 24 doesn't align anything meaningful, in my opinion. 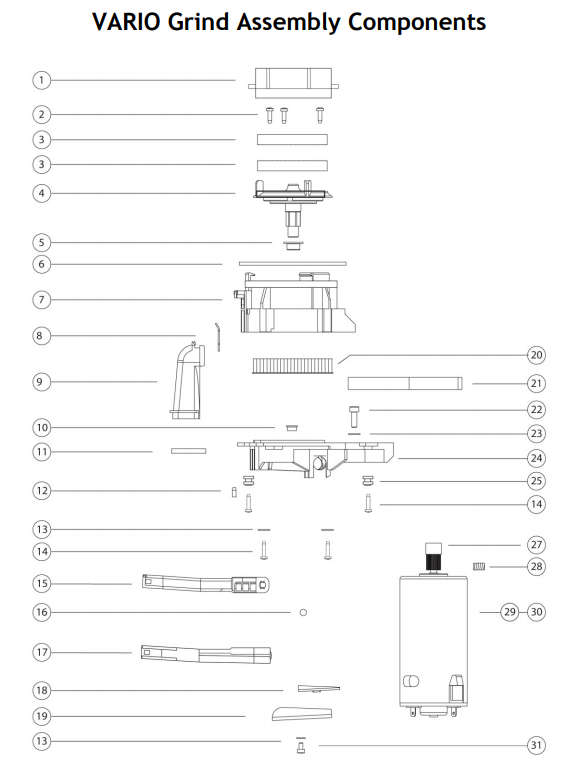 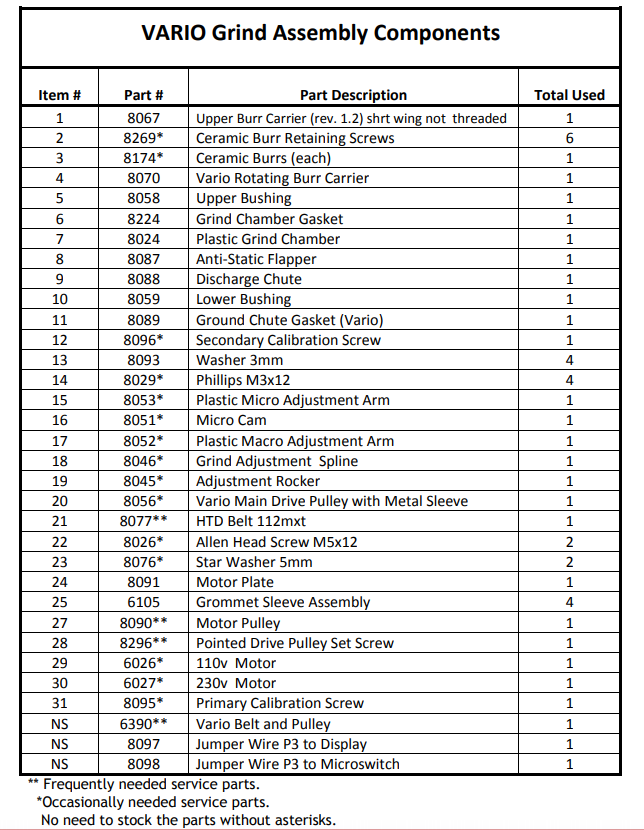 Sorry this didn't work out for you. Please refer to this post that explains some of the physics behind the alignment method:

If this didn't work for you, your grind chamber may be bolt bound and unable to shift far enough to achieve alignment without shimming. I have not seen this condition first hand, but I can see how tolerance stacking among the varying parts could yield this result.

Nice work with the shims. There is nothing inherently wrong with shimming, just nice when you can get good results without needing to, as burr changes and deep cleaning become trivial.

Ah, that makes sense. Thanks Jake!

My apologies for not doing my research!

Agreed, I didn't want to shim if there was a less invasive method.

Thanks for your reply and reference!
Top

I found this video of Jake performing the alignment: The problem for me is that I don't know why you're doing something. For example at 1:40 you're sliding the levers up and down a bit, feeling something, and than adjusting a screw. Same thing at 2:40. I don't know what you're trying to feel, what it should feel like, and what exactly you're fixing

Also, I tried the alignment (without good results) and I was pressing down on the levers, while you seem the press the entire black plastic "thingie". Might be the language barrier making it hard to understand the specifics.
Top

At 1:40, I moved the levers to their fully fine position and I could not feel the burrs touch. What I'm going for is to loosen the levers all the way and then bring the course lever as fine as it will go and then feel resistance as I bring the fine lever tight. What happened at 1:40 is that the fine lever didn't really give me a feeling of burr contact as I brought it to the fine position. So I tightened the calibration screw to bring the contact point to a coarser setting so that I could feel the burrs come into contact before the levers were tightened beyond their useful range.

At 2:40 I am simply ensuring that the levers still bring the burrs into contact about mid-stroke. I am holding the levers down (grinder is upside down, so down brings the burrs together) while I tighten the grind chamber screws back.

Then I set the final belt tension and I'm done.

But at 2:20, it seems you're pushing down on the plastic while starting to tighten the screws. Is that because the levers are already in a good position? Don't you need to keep applying pressure while tightening?
Top

Yeah, I tighten in little increments.

Tighten a little, make sure everything it still tight, tighten again, etc...
Top
← Back •
By accessing this site, you agree to the site's terms of service. If you need help with the site, please contact us.