Beginner and pro baristas share tips and tricks for making espresso.
← Back to Tips

I know this sounds like a simple question but I've been second guessing myself on what the crema should look like for a properly extracted shot. I've been using a measured shot glass with a 30 and 60mm line to note my volume and pour time because I've been having a lot of problems with the silvia.

I've changed the shower head screw, tightened up the rocky doserless, and thanks to Jim have been recording temperature data, so my shots are actually drinkable now!

So the point of the post is, besides taste, looking at the crema, what denotes good extraction?

The Sweet Maria's page is an excellent reference point. The picture of their ideal crema looks a bit light to me, though. I like the picture on this page better: 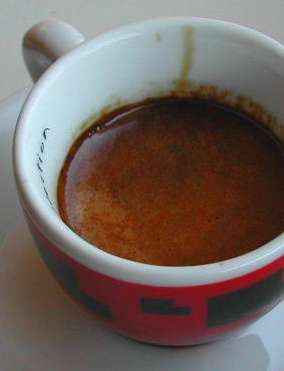 The crema has a nice reddish-brown color with some tiger flecking on the surface. Yum.
Lock and load!
Top

wow, that's a good pic! Maybe I have to grind finer then! lol

So if I'm getting much lighter crema but still with dark flecks, could that be due to, too many solids getting through my basket even though I can go for better extraction? I'm pretty much been getting what sweet marias pictures as ideal. Seems a little watery sometimes compared to the shots i've had out in cafes.

Sorry no pic, my cell phone won't show any kind of detail.
Top

Just pulled another quick shot. Ground a little finer, slightly less dose (curved finger when leveling), and slightly higher boiler temp at 115ish Celsius. Slightly on the low volume side with a little over 1 ounce and about 32 seconds but .....

Best tasting shot yet! Much thicker, even darker crema, no visible peppering of solids like was getting before!

Thanks sooooo much for the pic!
Top

Happy to help. I'm glad you were able to get such satisfying instant results.

The color of the crema will vary by coffee. Some blends will produce a lighter color and less viscous crema than others. Coffees with Yemen then to produce a darker brick red crema, robusta blends will produce a lighter crema but lots of volume. Trying to judge a shot by sight has very limited returns although there are a few visual tell tell signs. Dark black ring around the outside accompanied with a burnt smell, brew temp was too high. A light polka-dot in the middle can be a sign that the shot was pulled too long. The only time I really use the crema as an indicator is with a coffee that I am familiar with. If it consistently produces a particular look in the crema then a shot changes drastically I have a pretty good idea something is not right although I still taste the shot. Then I try again, if I get the same result and the flavor is off, I go about diagnosing what I am doing wrong.
Dave Stephens
Top

Ah ok I gotcha. I'll keep that in mind. I guess I was looking for confirmation on those tell tale signs because I have recently limited some other variables and barely have any experience with taste. To be honest, this is the first time I was able to reasonably control some variables and have my shots even be in the correct ballpark! lol
Top

The WBC (Barista championship) standard is for cinnamon to reddish brown crema with tiger flecking. The Italian definition gives predominant cinnamon with reddish brown tinges and no tiger flecking, which it regards as a sign of too high a brewing temperature (you need to be at 93C to 95C or 200F to 203F to get tiger flecking).

More important than color is crema persistence -- take a spoon and pull it through the crema, it should be thick enough to heal itself; if it isn't, you have coffee freshness or extraction problems.
Jim Schulman
Top

I have had a few coffees, usually a SO, that tastes perfectly good but the bean just does not produce a heavy viscous crema. There is always that odd ball blend or bean but most produce a heavy crema with varying color based on the content of the blend. In addition to Jims suggestion of the crema being able to heal itself you could add a small demi spoon of sugar or a pack of sugar on top of the crema. It should actually float atop the crema for a few seconds before finally collapsing through.
Dave Stephens
Top
← Back
By accessing this site, you agree to the site's terms of service. If you need help with the site, please contact us .