A haven dedicated to manual espresso machine aficionados.
← Back to Levers • 329 posts •

I recently found a black Peppina through Craigslist Philadelphia. She arrived on my doorstep this morning. It was kismet: the former owner ("I haven't used the machine in 20 years") was having dinner last night with a guy who happens to live right around the corner from us; my neighbor, whom I'd never met before, hand-delivered the machine. This, in a metro area with a few million people! Peppina and I are fated to go places together.

Peppina is much heftier in real life than in her publicity photos. I was expecting a little tulip of a machine but she's one huge dodo. I keep asking my teenage son to take some pictures of my recently acquired white '92 Olympia Cremina (delicious espresso with Black Cat, and Caffe Fresco's Daterra and Papua New Guinea roasts; some Ambrosia arrived yesterday and will be degassing until Sunday). But my son reminds me that he has a life. But I am sure he'll be willing to snap a few shots of this rare bird, if only to have a good laugh with his buddies at my expense. I'll put the shiny white Olympia and the very dusty black Peppina side-by-side.

Anyway, I have been reading about La Peppina on the web over the past few weeks. Jim Schulman remarked on alt.coffee in June 2004:


The La Peppina has superb temperature stability because it is too primitive to be unstable; what a concept! The only source of instability is the lightweight group, which probably accounts for the 1.5C within-shot variation.

I have seen some interesting pictures of Peppina techno retrofits. So, I am a couple of years behind the curve. But I am wondering what a very compact espresso machine based on Peppina's simplicity might look like... if we were to add the requirement that it be able to steam milk competently. The machine must appeal both to the espresso enthusiast for the accuracy and repeatability of its temperature and brew-pressure, and to the spouse who is willing to indulge the coffee obsession provided it yields a cappuccino or latte. My anecdotal market research tells me this is a common scenario.

What if one took a horizontal box like the Olympia Club and added center-left a Peppina-style pour-over boiling pot but made of brass and one half the size of Peppina's, and broader to reduce its height, and added, center-right, a small pressurized boiler dedicated to steam. PID for maintaining brew water temp. Deluxe model would have thermometer on the face of the chassis for brew water temp and a manometer on the right for the steam pressure. Spring-lever would be mounted front center. Heavier brew group with a heavy brass 49mm portafilter to hold temperature. Trying to keep the machine as compact as possible, that's why a 49mm rather than 58mm PF. The prototype could be manual fill but production model has the convenience of a water reservoir on the left wall of the chassis and a tiny, very quiet pump solely for moving fresh water from the reservoir into the brew water boiling pot and into the dedicated steam boiler. The pump would not have to create brewing pressure. How do you prevent the fill pump from overfilling the unpressurized boiling pot?
Timo
Top

The Peppina has a steaming attachment which works for the 1100 watt models, but is too anemic for the 700 watt ones. I don't use mine.

I think the machine is pretty perfect as a very portable straight shot maker; for a portable cappa maker, I think the europiccolo with millenium group might be the ticket. I recently scored one on ebay for a good price; but it's still in the clutches of the USPS parcel service, so it looks like it'll be after Charlotte before I can take it through its paces.
Top

Congratulations on an excellent score - I dearly loved the cups that our Peppinas have delivered over the years, there really is no other machine quite like the Peppina.

However, please allow me to insert a sobering note of caution - never forget that as you prepare your morning drink, you are going mano-a-mano with a full litre of boiling water which is perched on top of a spindly, easily overbalanced machine.

Make certain that your Peppina is on a solid, level counter, and always keep one hand on the back of its base while pulling the lever to counteract its tendency to right-rotate and suddenly invert. Note: after the first time (Yeee-ouch!) you will have no further desire to steady the machine from the top.

Trust me, there are few Life Experiences quite as 'invigorating' as having that much boiling water thrown all over you.

Mercifully, it was a cold morning, so I had on a wool shirt over my PJ's and escaped with some nasty scalds and no 2nd degree burns - but the vivid, and rather horrid, image of watching the shelf collapse as my Peppina hurled itself towards me still lingers.

Duly noted, Dr Jim. Thanks for the warning. I think this danger, more than its dodo appearance, is the reason why Peppina went extinct.
Timo
Top

The dispersion screen is in great need of a soaking but there's very little room between the drip tray and the screen, hardly room enough to get sufficient torque to budge the three frozen screws that hold the screen in place. Is there a tool that consists of a short screw driver head affixed to a little tommy bar?

another_jim wrote:The Peppina has a steaming attachment which works for the 1100 watt models, but is too anemic for the 700 watt ones. I don't use mine..

Mine is the 700watt model. My intention was to bring it in to the office, to drink an espresso after lunch to see me through the afternoon. Now that I know the machine's size and have a vicarious feel for the scalding hazard, I'm going to have to clamp it or bolt it to the windowsill in my office.

I really like both your white and your black knight, and I always enjoy Dr. Jim's posts. His recount of the Peppina shuffle rivals his interesting Fellini posts (btw, there is a list of espresso-related video at:

I was comparing the group on the Cremina to that of the Ponte Vecchio: 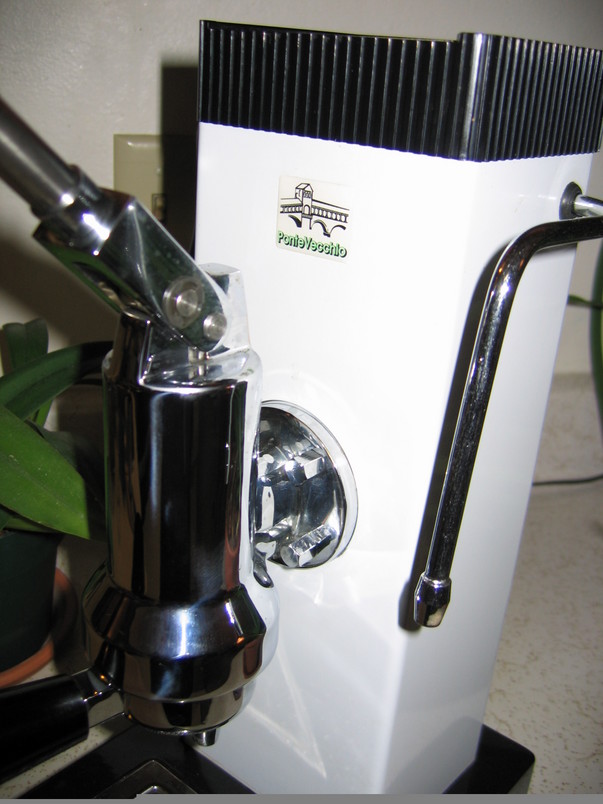 I wonder if I could bolt a Cremina group on the PV boiler?

With regards to tools. Can you not use a screwdriver bit in a socket wrench?
Steve Robinson

Thanks, peacecup. I will take a look at the espresso site first thing tomorrow morning.


peacecup wrote: I wonder if I could bolt a Cremina group on the PV bioler?
PC

The group bolts on the Cremina look to be 27mm on center apart. You'd better get corroboration on that, however, from someone who has actually taken it apart. I did a quick measuring with some cheap calipers.

srobinson wrote:With regards to tools. Can you not use a screwdriver bit in a socket wrench?

I tried with a socket wrench and slotted screwdriver bit and ultimately succeeded. But the screws are made of a very soft material, and didn't want to budge. With the socket adapter, the socket, and the screwdriver bit, things were pretty wobbly and I couldn't get a good feel for whether the bit was seated in the slot of the screw head. I thought maybe a little tommy-bar-screwdriver-bit gizmo, if it existed, would give me more tactile feedback. However, I pressed the bit into the screw head as tightly as I could before ratcheting and hoped for the best. The screws did budge and only a little bit of metal on one of them was lost.

The gunk between the shower screen and the piston is really something to behold. It's almost archeology.