Need help with equipment usage or want to share your latest discovery?
← Back to Espresso Machines • 18 posts •

I received my new PF pressure gauge today and checked the pressure on my (new-style) Silvia - looks like about 10 bar. I'd like to adjust the OPV down, but before I start screwing around with the internals, I'd like to hear from somone who's done it already.

I took off the top cover to take a look inside, and I'm guessing that my procedure will be the following:

1. Unplug machine.
2. Take picture of wires I'm about to disconnect so I don't have to rely on memory.
3. Disconnect wires that are in the way.
4. Loosen jam nut (closest to body of valve).
5. Loosen outside nut to lower pressure.
6. Tighten jam nut.
7. Re-connect wires.
8. Plug-in machine and test pressure.
9. Repeat as necessary.

Does that about cover it? About how much do I turn the outside nut on the valve for a corresponding drop in pressure?
Top

That about covers it. Here are some good pictures of the OPV here: http://www.pidkits.com/opv.html

As to the adjustment needed, unsure about that... I have the old OPV design.

Also, you may find that your PF gauge is going to bounce a bit... you'll need to guess an average, or use a snubber or capillary tube.... I just guessed

As Jeff said, your proposed method is as good as it gets and I think lots of folks would appreciate it if you "report back" with the exact size & type of wrench you used to make the adjustment. Be forewarned that Silvia's wrench sizing tends towards the bizarre.

When you measure the pressure with a PF gage, all of the pump flow is passing through the OPV and heading back to the tank. If you measured the pressure (you obviously can't with a PF gage) while pulling a "standard double-shot", you would see that the pressure is reduced by anywhere from 0.5 to 1.0 bar with Silvia depending upon where your OPV is set in the first place. Trust me - it is complicated and not easily explained. More than likely your PF gage is vibrating rapidly between, say, 9.8 & 10.2 and the midpoint looks like 10.0. This would give you a true brew pressure of around 9.5 and keep in mind that as the OPV spring gets "broken-in", that pressure will drop - an inherent characteristic of springs that get some exercise.

An interesting additional observation would be how the espresso tastes with the current OPV setting and how it tastes after the adjustment and whether or not you found it necessary to make any grinder adjustments (probably very, very slight if any).

Well, I mucked around inside Silvia today... while I was there, I revisited the OPV setting.

I have a 2003 model Silvia, which has a different OPV than the new 2006 model. I had previously tried the modification for the original OPV installed in Silvia as seen here: http://mysite.wanadoo-members.co.uk/m4t ... reMod.html

Basically, you use copper washers as shims to decrease the spring tension on the OPV / expansion valve, hoping you can get it to crack open closer to the desired 8-10 bars (old stock was reported at 12-16 bar). Newer Silvias have an adjustable OPV (as noted above in this thread) and seem to ship at a more reasonable 9-11 bar, per reports.

I bought this portafilter pressure gauge adapter kit from 1st-line some time ago. I'm not sure if it is just the nature of the vibe pump, this gauge, the Silvia OPV or some combination thereof, but using this thing to tell you the brew pressure (or OPV setting) can be frustrating. The gauge rapidly swings about 4 bar up and down on my Silvia, so fast that it's just a blur (yes, I know of snubbers and capillary tubes, but don't have one laying around). When I did the OPV mod about 7 months ago, I thought the addition of a copper washer may have resulted in too low of a setting for the OPV (based on averaging the swing of the gauge needle). I decided to reverse the mod, and went back to factory, which I was guessing was close to 10 bar at the time (an 8-12 bar swing on the gauge).

Today, I sanded a spare copper washer a bit thinner (to increase the spring tension slightly after adding to the existing washer), and tried this mod again. When I got it back together and tested it, I get a gauge reading (blur) of 5-9 bar. The reading doesn't appear to change significantly (if it could be noticed with all that noise) whether I tightly lock in the PF, or if I leave the steam valve cracked open to simulate the flow of a shot by allowing some water to leave the boiler. In either case, I had water returning from the OPV, so I know it was cracking open. I decided to give this setup a go and buttoned things back up.

Well, I am a happy camper

. No, I don't know what my pressure truly is

, but man it seems a lot better now. I get a longer dwell time (takes a bit longer before the first beads appear on the bottomless portafilter). I have had a much easier go of it with the bottomless as well (pin hole channeling was much less prevalent looking at the spent puck). I'm thinking the only thing to be concerned with is the top of that gauge swing (the point at which the OPV cracks open) or ~9 bar in my case today. If that's the case, I may have been closer to 12 bar before today's changes.


erics wrote:An interesting additional observation would be how the espresso tastes with the current OPV setting and how it tastes after the adjustment and whether or not you found it necessary to make any grinder adjustments (probably very, very slight if any).

After the OPV "adjustment", I get a shorter shot (less volume) at the same grind setting as previous. It also seems less overextracted (less fines, black ring in the crema/cup). I ended up coarsening up the grind, but I also ended up changing blends (ran out) after about 2 shots.

I also had a bit of a chuckle this evening, when I saw this thread regarding the Rancilio Epoca (an $1800 machine), and saw this picture: 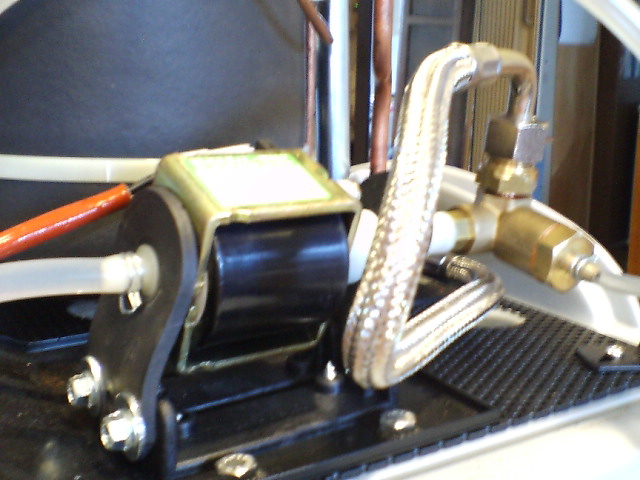 It's the EXACT same OPV as in the original Silvia, in all it's non-adjustable glory!
Jeff Sawdy
Top

I have the older non-adjustable OPV. Can I completely swap it out with the new style OPV? I can get one for around $45, then it is easier to tweak. Or is it better just to get the $1 washer?
Top

Going down to your local hardware with part in hand and buying a few copper washers is certainly cheapest.

)
Quarters are tight (especially with an adjustable end wrench) use caution and make sure that you are not about to muck up the power switch and/or connections.
You need to grab the body of the OPV with Channellock pliers, and work against the torque of the wrench, it was pretty tight
The copper washer seems horribly oversized, it would seem to me that a smaller diameter one would have been better
My Silvia is PID controlled, so I set the temp down to disable, so that if I needed to redo things, it would not be blazing hot.
Jeff Sawdy
Top

I just wanted to check that things were all working as I thought. Today, I was a bit more methodical about measuring the brew pressure and I saw less swing of the gauge.

Specifically, I ensured that I eliminated air in the PF and gauge by filling the PF slowly with some brew water and swishing it around. Once the PF was full, I locked it in tightly (no basket) and ran the brew water with the steam valve just cracked open until water came out the steam wand. With a timer running, I tried to get 30-50ml in 30 seconds or so coming out the steam wand. (If you try this, don't get caught up in it and let the vibe pump run forever

Today, my pressure gauge only swung from 7-9 bar, so I know I am in the ballpark.

Incidentally, I am still happy with the "in the cup" experience.
Jeff Sawdy
Top

I could not find this type of washer/gasket in copper. I found it in rubber, plastic, and some sort of nylon material, but no metal. I'm assuming it is copper to handle the high heat since it is directly connected to the boiler. Do you think the nylon part would work?
Top

You can of course order the part online, but you might try an auto repair shop.... These are often used for oil plug gaskets, etc. I wouldn't try the nylon one. I don't want to send you on a wild goose chase, so you may just prefer to order the copper gasket. I ordered mine from 1st-line some time ago with several other repair parts and accessories. I am certain other online vendors have it as well.
Jeff Sawdy
Top

How many of the copper gaskets do you want?

One for $2 delivered
Two for $3 delivered

But what you really should be doing is measuring the EXISTING pressure and there are many ways in which you can do this, e.g.:

a. adapt to the 1/4"-19 BSPP threads on Silvia's steam outlet with a 1/4-18 NPT fitting and some soft copper tubing to a 0-300 psi glycerin filled gage. Brew your typical shot and read the pressure.

A good place for gauges is here: http://www.gaugestore.com/

b. buy or borrow a portafilter pressure gage - actual brew pressure is ~ 1.0 bar less than this value.

c. measure the flow in the OPV line (using a blind basket pull) by timing how long it takes to go from the 2 oz mark to the 4 oz mark on a pyrex cup (yea I know the accuracy is questionable but the differential should be pretty good) and convert to cc/min. Use the chart below to pick off your pressure. Actual brew pressure is ~ 1.0 bar less than this value.

edit: Jeff - I was typing and watching other things as you were posting
Top
← Back • 18 posts •
Sponsored by La Marzocco · Home