For preinfusion, the manual group has a cylinder and piston, the automatic group has an air cavity.

If you buy a semi-commercial E61 box, chances are you will get none of this. As far as I know, the only really fine-tuned thermosyphon groups are the NS Aurelia, the E61 Legend, and the Kees E61 machines. I've used all three, and they do as well as double boilers in terms of thermal stability from full idle to full busy. But pulling this off really well remains something of a black art.
Jim Schulman
Top

Heh, if its not one thing, its always another.. So much trouble just for coffee...
Top

another_jim wrote:Old fashioned groups, with lots of air in them, like lever groups and E61s, do not need a gicleur, since the time it takes for the air spaces to fill with water provides a gentle ramp up in pressure.

While I can differentiate between "need" and "have," the original patent for the E-61 shows a manually adjustable Gicleur, and current versions have one as well.
Espresso! My Espresso! - http://www.EspressoMyEspresso.com
LMWDP #644
Top

another_jim wrote:This was combined with an adjustable restrictor in the thermosyphon loop to keep the group head at proper temperature levels...

For those who are curious, below is a photo of the thermosyphon restrictor Jim's talking about from an Faema Legend: 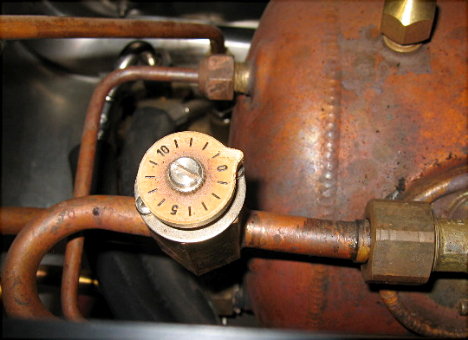 Those interested in a more detailed explanation of the (brew path) gicleur, see Is there a purpose for the E61 middle brew lever position?
Dan Kehn
Top

Heh, if its not one thing, its always another.. So much trouble just for coffee...

To clarify..the OP's question was referring to the brew path and the effect of the gicleur on brew pressure readings ..
..so any reference to thermo syphon loop restrictors is interesting , but irrelevant to the question.
I believe all E61 groups have a gicleur in the brew path.
Top

Yes, E61 groups have a gicleur in the brew path, but it is not there to control the initial brew pressure. Instead it controls the initial balance of HX water (via the regular brew path) and tempering water (via the thermosyphon return (which also has a jet).
Jim Schulman
Top

What the heck is a gicleur-jet for?!?

Most especially with an E-61 machine fitted with a rotary pump and, to a lesser extent with those equipped with a vibration pump, it (the 0.70 mm gicleur) slows the filling of the preinfusion chamber and other minor cavities in the manual E-61 groupheads. The gicleur fitted within the "mushroom" of the E-61 has no effect whatsoever on the flow balance between the upper and lower tubes - it can't.

It's usefullness on an E-61 group fitted with a vibration pump is somewhat minimal and I would think its more of a production standardization feature than anything else. Some rotary pump machines, the Quickmill Vetrano (as a for sure example) have gicleurs fitted to the pump discharge (0.80 mm) in an attempt to tame behavior.

Some current E-61 machines (all Rocket production, all Vibiemme Hx models, perhaps likely ECM Germany) are fitted with a thermosyphon restrictor in the upper tube having dimensions of ~3.0 mm. This restrictor, most definitely, has an effect on the thermosyphon flow (decreasing) and has a small effect on the balance of flow between the two tubes connected to the grouphead during brew conditions. The reason the effect is small is because the flow velocities are themselves very, very low but the desired effect is still there. It would be a tough calculation because other factors can be more determinant.
Skål,

I played with the gicleur size on my Elektra with multiple jet sizes. It does improve the forgiveness factor for a rotary pump machine but you can pull perfectly good shots from a machine without one provided your technique is spot on.

As to the question about the gauge capillary placement, keep in mind that most gauges are not rated for high heat especially the cheap gauges on most espresso machines. So the pressure capillary is between the pump and HX as a matter of convenience and you don't need a gauge rated for high heat.
Dave Stephens
Top

I agree with Eric: you would be doing lots of things in your house a big favor to put a whole-house pressure regulator at the water inlet. Typically in the US you see that set to 80 psi, which is about 5.5 bar. In most places, it's part of the building code.

Best,
David
Top
← Back •
By accessing this site, you agree to the site's terms of service. If you need help with the site, please contact us.