The vacuum breaker in GS/3s manufactured before serial number 1170 vented directly into the interior of the machine. Here's a photo from gs3cafe.com of the vacuum breaker (labeled Q) in one of the early production units: 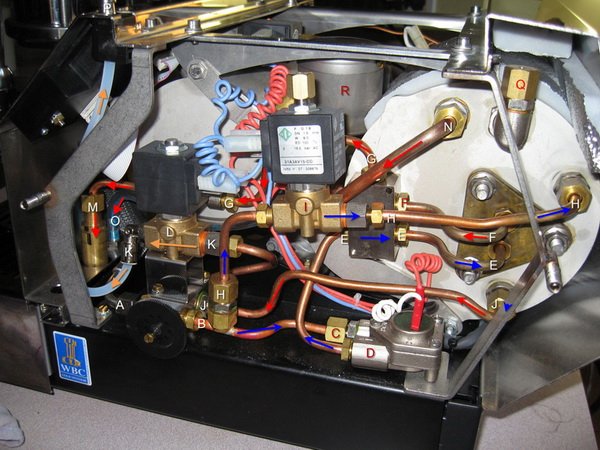 Note the strip of insulation above the valve. When the valve vents, a small amount of water and steam spurts out of the top. While the discharge is relatively small, in the early production units it tended to loosen the glue holding the strip of insulation above the valve, which sometimes would detach from the top cover and fall on the valve stem, pushing it down into an open or partially open position. With the valve stuck open, copious amounts of steam could be released inside the GS/3, which could condense into water, which in turn could flow along the internal wires into the brain box and destroy the logic board.

La Marzocco fixed the problem by sliding a thick silicone sleeve over the valve, protecting the valve stem, and by removing the insulation directly above the valve. A vacuum breaker with the silicone sleeve is shown in this photo from coffeegeek.com: 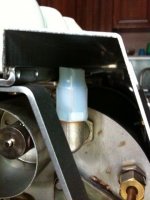 If you look closely, you can see the valve stem in the up, or closed position.

This fix took care of the insulation problem, but after about six months GS/3 owners started reporting another problem with the vacuum breaker: mineral deposits.

Most owners set the GS/3's internal timer to turn the machine off after the daily coffee-making sessions and turn it on in the morning. This cycling exercises the vacuum breaker on a daily basis. Inevitably, some of the water expelled by the valve during the venting process falls back on the valve seat, and if the machine is turned off for any significant period thereafter, the water can evaporate and leave mineral deposits. Over time, enough deposits can accumulate inside the valve to block it from fully closing.

My first attempt at solving this problem was to purchase a vacuum breaker with a hose barb, available from Chris Coffee. The hose barb allows a drain to tube to be run from the vacuum breaker to the drain box or outside the machine to a sink or container. The problem is that you need about 2" of clearance above the valve to accommodate the bend in the drain tube: 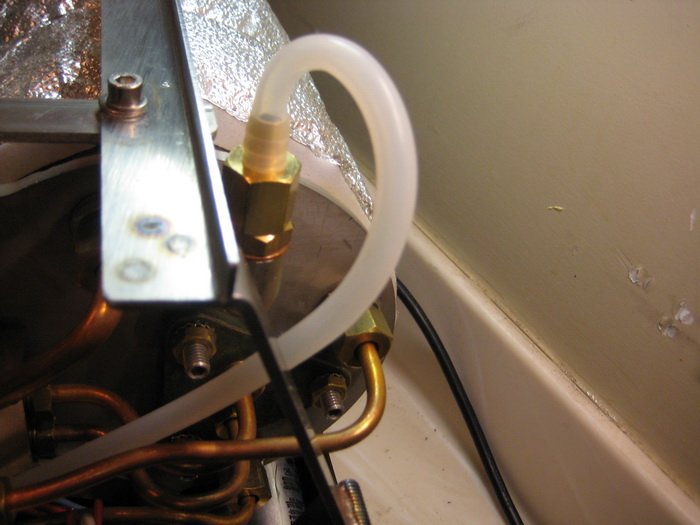 Unfortunately, there isn't enough clearance under the top cover of the GS/3, so the drain tube gets compressed. When I installed the new breaker, I also found that there wasn't a good way to get the drain tube into the drain box without compressing the tube. While the tube wasn't fully closed off at the bend or the drain box, and the breaker did vent, it seemed to me that this wasn't a good permanent solution.

But good news recently arrived from La Marzocco. Starting with serial number 1170, the GS/3 has a new vacuum breaker that drains into the drain box. My understanding is that the valve and seat are Teflon-coated to retard formation of mineral deposits (I haven't confirmed this.) Here's a page from the parts catalog showing the new parts: 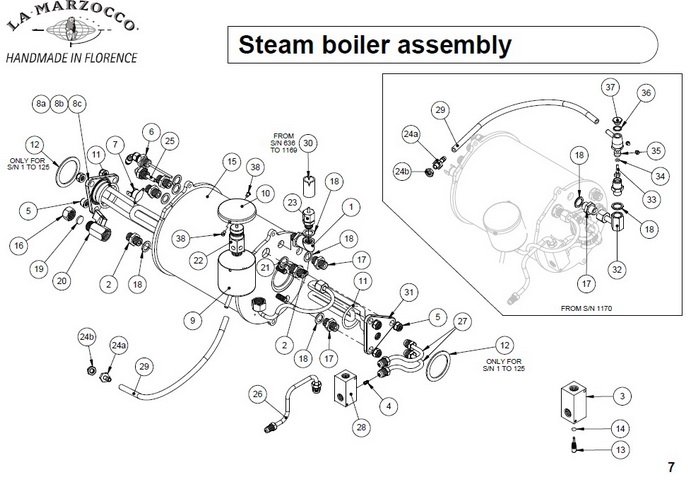 As you can see, the vacuum breaker has a 90-degree barb that allows a drain tube to be attached without a sharp bend. The other end of the drain tube attaches to a barbed fitting installed in the frame above the drain box, identical to the barb for the steam boiler OPV drain tube.

GS/3 owners with machines older than serial number 1170 can purchase a new vacuum breaker kit through their dealer.

Installation of the new valve is straightforward. The machine should be turned off, unplugged and allowed to cool completely. Since the vacuum breaker is located well above the water level in the steam boiler, it's not necessary to drain the steam boiler. But you might want to do it anyway because it's easy. 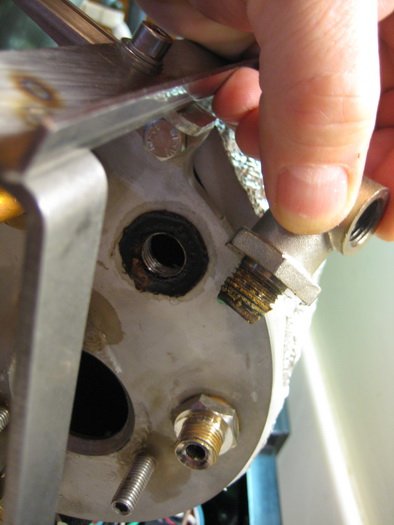 (Um, ignore the fact that the heat exchanger and various tubes have been removed from the steam boiler. I'll explain that in a future post.)

As you can see, there's a fiber gasket under the elbow fitting. This needs to be removed, too. My gasket was baked onto the surface of the boiler and had to be carefully removed with a utility knife. As a precaution, I stuffed a paper towel into the hole to prevent pieces of the gasket from falling into the steam boiler: 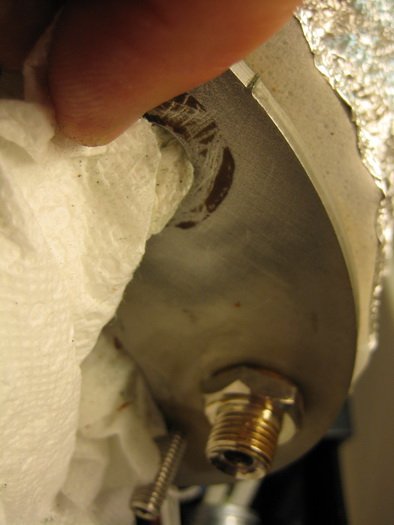 After a bit of scrubbing with a Scotch Brite pad and some very coarse kitchen steel wool (the copper-colored stuff), I was able to remove the last remnants of the fiber gasket: 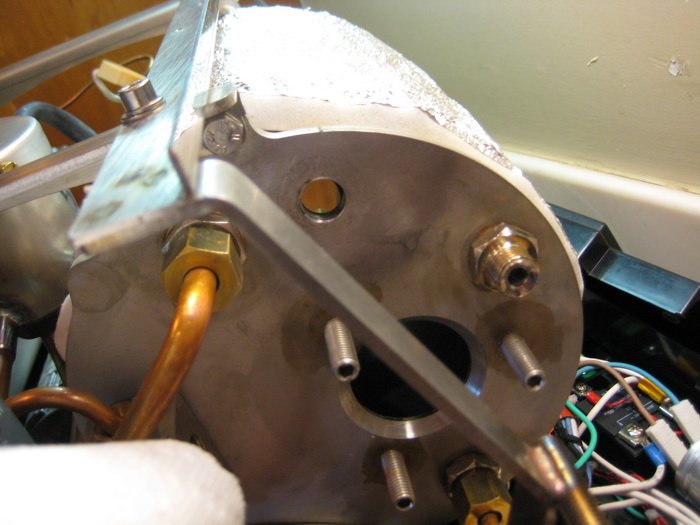 Installing the new elbow and vacuum breaker seemed like it would be pretty straightforward, but it took a little thinking to pull it off. The most obvious problem is that you can't just attach the elbow to the steam boiler and screw in the vacuum breaker. The 90 degree hose barb on the breaker hits the nearby horizontal section of the frame. So the vacuum breaker and elbow have to be assembled together before being installed as a unit: 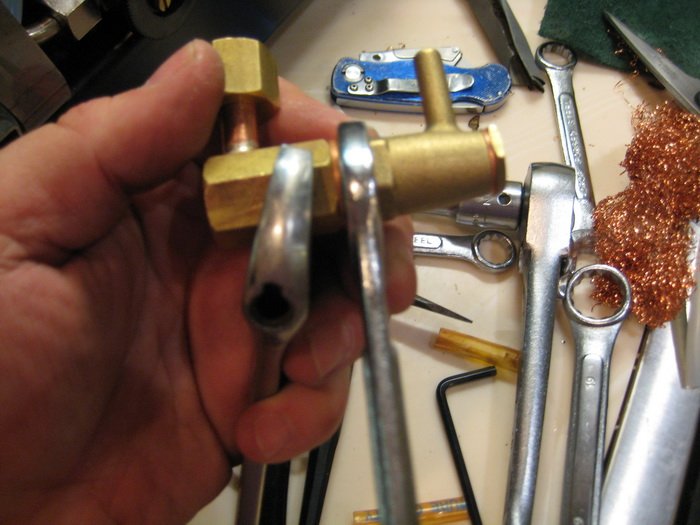 The next (and less obvious) problem I encountered was that the vertical frame piece prevented the elbow and breaker assembly from aligning properly with the reducing adapter on the steam boiler: 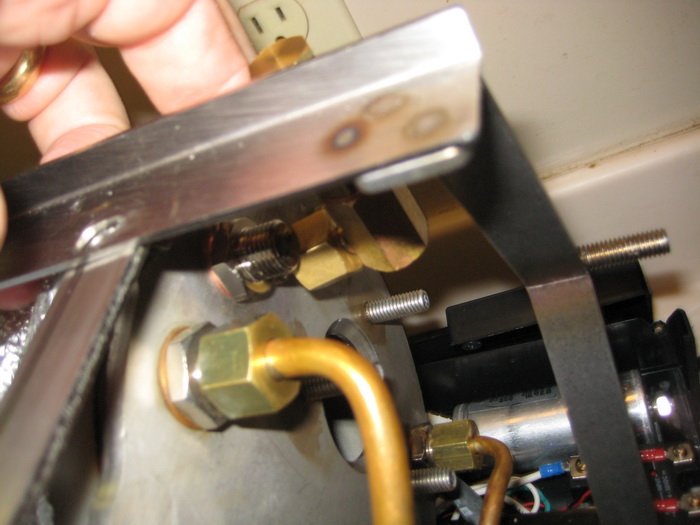 Actually, this photo doesn't show the problem. It's not the horizontal portion of the frame that interferes with aligning the elbow and adapter. It's the vertical strut. You can't see that in this photo because the assembly is turned away from the camera. As you'll see in subsequent photos, the new vacuum breaker assembly extends quite far to the right, enough so as to be prevented by the vertical strut from aligning with the adapter threads.

The solution was actually pretty simple: loosen the two screws that attach the rear frame piece to the cross pieces that run to the front of the machine, and bend the rear portion of the frame, including the vertical strut, slightly out of the way. It didn't need to be moved very far, less than 1/8 inch. This photo shows the assembly in place. 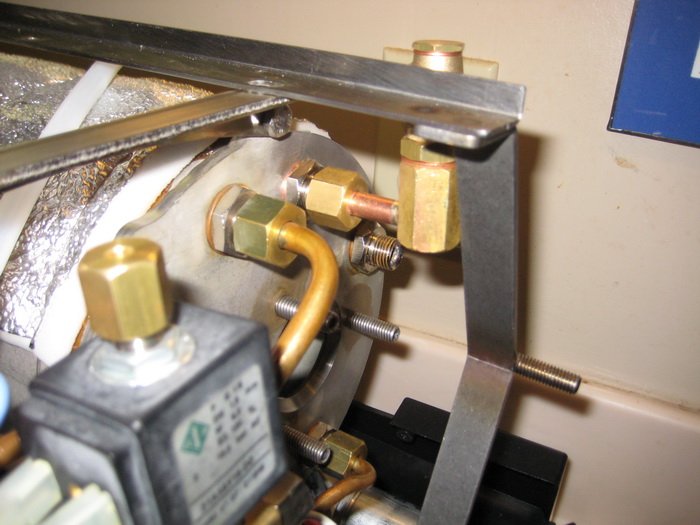 (In this and subsequent photos you can see where one of the screws was removed from the frame.)

Once the elbow was fully screwed into the adapter, the entire assembly cleared both the horizontal and vertical portions of the frame.

I've since learned that when I got my new-style vacuum breaker, the new elbow fitting shown in the diagram wasn't available and a custom-made fitting was provided. From what I was told, there's an important difference: the fitting on the stock elbow can be screwed on without moving the frame. So, if you get a kit with the stock elbow, YMMV.

The next task was to run the drain tube to the drain box. I wasn't intimidated by the idea of drilling a hole in the frame above the drain box for the barbed fitting, but I was told that it would be simpler use a T-fitting to attach the tube to the drain tube coming off the steam boiler OPV. That tube already has a fitting in the frame above the drain box. This seemed like the way to go, so my kit included a plastic T-fitting. The folks at Chris Coffee were kind enough to substitute a stainless T-fitting that they felt would be more suitable. This is one of their stock items, available here.

To avoid the hot copper tubes on the right side of the steam boiler, I ran the drain tube over the insulation on top of the boiler, as implied by the diagram in the parts catalog: 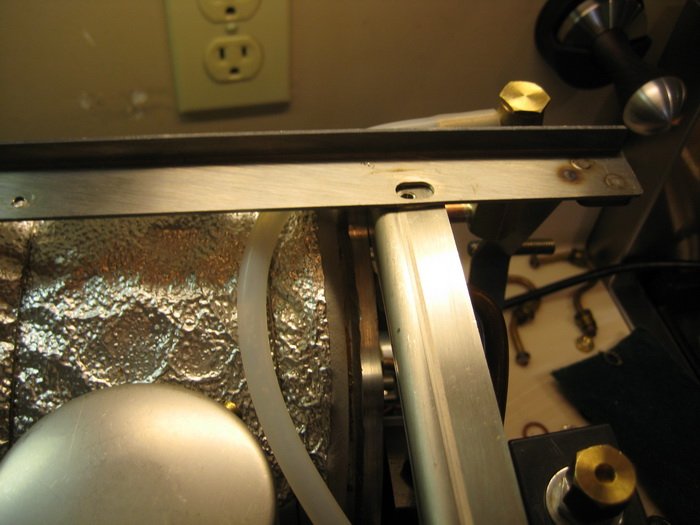 Initially, I thought I could attach the T-fitting close to the drain from the steam boiler OPV: 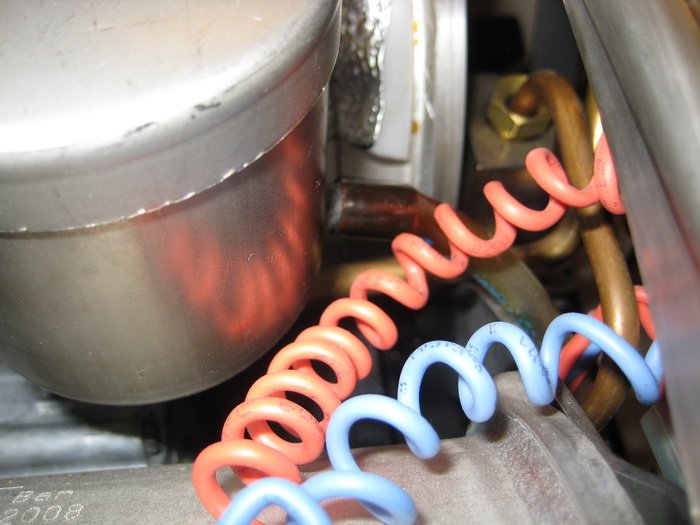 I pulled the tube off the OPV, cut off the dark discolored portion, and cut a short section to attach to the T-fitting: 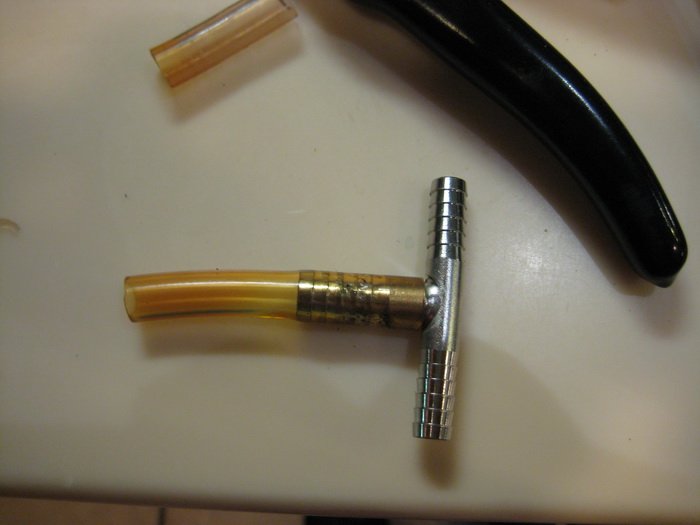 But there just wasn't enough room between the OPV nipple and the solenoid on the right side of the machine for me to slip the T-fitting into the space and attach it to the OPV. It was very hard to work in that space and, try as I might, I wasn't able to get the plastic tubing back over the OPV nipple. 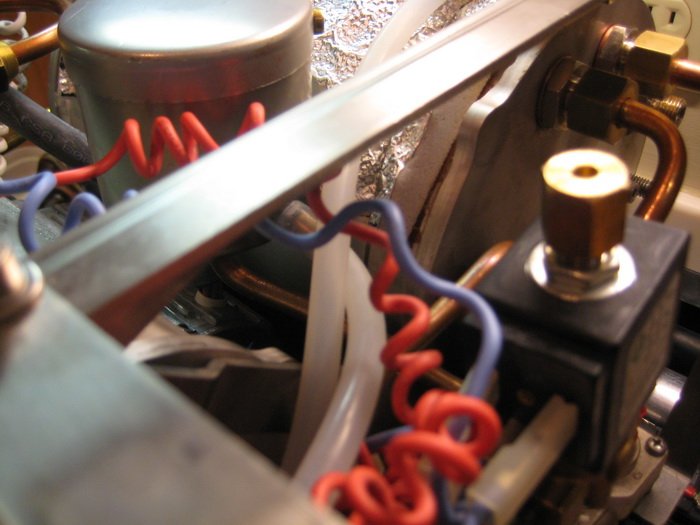 To make the final steps easier, I removed the top front panel of the machine by unscrewing the two mounting screws and gently pulling the panel aside without unplugging the display and button cables. This gave me access to the front of the machine and the OPV hose barb in the frame above the drain box. Here you can see how I routed the two tubes and connected them with the T-fitting: 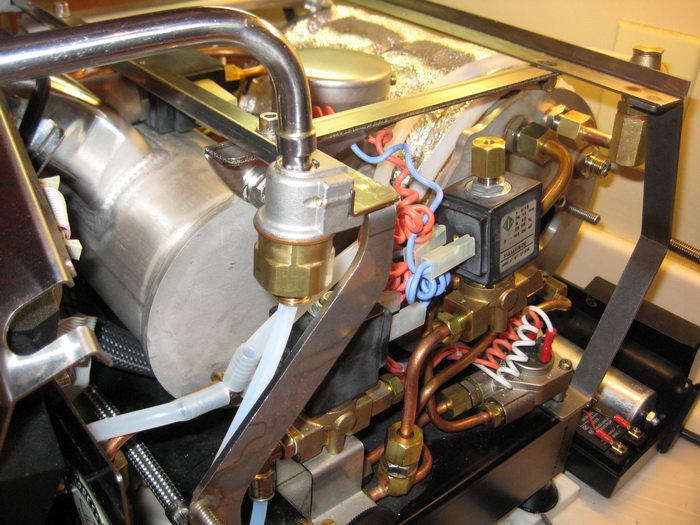 The short tube from the T-fitting goes to the OPV hose barb in the frame above the drain box.

And that's all there was to it!

With the machine reassembled, I fired it up and waited for the vacuum breaker to do its job. Soon a small amount of steam vented into the drain box, then the valve closed. A few drops of water got routed by the T-fitting into the OPV tube, but not enough to cause concern.

I've gone back to cycling my machine on and off on a daily basis. It's a toss-up as to whether the thermal stress of doing this is worse for the machine than letting it run all the time. I've never been completely comfortable with letting the machine run all night anyway. But mainly I want to find out how long the new vacuum breaker can go without servicing. At least if mineral deposits cause it to get stuck open, it will vent harmlessly into the drain box!

In summary, I highly recommend the new-style vacuum breaker to all GS/3 owners with serial numbers earlier than 1170. It's not terribly difficult to install and it's well worth the effort.
Top

I've installed the new vacuum breaker. Was not too bad. I ended up taking off the back frame, which was very easy. I have the T on order from Chris Coffee so I can finish the installation. For now I have the right side panel off and put the end to the silicone tube into a cup.
Top

About a week ago, after my GS/3 had turned on and warmed up, I heard a bit of sputtering and gurgling coming from the drain box. Lifted the drip tray and, sure enough, a small amount of water and steam were coming out of the exit port for the OPV and new vacuum breaker.

I removed the right side-panel and squeezed the silicone tube coming from the vacuum breaker. The sputtering stopped. This verified that the new breaker was stuck very slightly open.

I gently rapped the side of the breaker with a pair of pliers and the gurgling stopped. Evidently, I dislodged whatever was blocking the valve from closing. So far, no more gurgling.

Hopefully it was a but of random gunk and not premature scale buildup. I'll post if it happens again. The good news is that the water and steam vented harmlessly into the drain box, not into the interior of the GS/3, where it could have caused mischief in the brain box.
Top
← Back
By accessing this site, you agree to the site's terms of service. If you need help with the site, please contact us.