TLDR:
The level detect circuit in 3D5 controllers utilize an oscillator. When the probes detect water, they interrupt the signal from the oscillator. If the oscillator circuit becomes damaged, neither the boiler nor tank level detection circuits will function. Often times, the problem with the circuit is simple, and can be repaired.

For the Nerds:
The morning of August 7th started off like any other morning. My alarm annoyingly roused me at 0400 in the morning I stumbled out into the living room, bleary eyed and more than half still asleep. I approached my trusty GS/3, which obediently wakes up an hour before I do each morning, so that when I stumble up to it, I may soon be rewarded with the first glimpses of awakening.

Not so on August 7th.

No pleasant blue hue from the backlit push buttons and display. Merely the time, and the word "Off" were displayed. "Odd", I say to myself. I press the power button and I'm greeted by "Refill Tank" on the display. Now, mind you, I had pulled a delicious shot of Bon Mua Vietnam Typica 12 hours earlier, and I'm pretty fastidious regarding my routine after a session. This routine almost always ends with me topping up the reservoir, so I'm a bit concerned at this point. Pull the drip tray, slide the reservoir out. Pretty much full. Hmmm... I slide it back in.

Last ditch effort is to set the "Tank Present" parameter to "No".

I power the machine on and the pump kicks on to top up the boiler. It stays on. Far too long. I power her down. I'm suspecting that I will find some sort of watery mess when I pull the sides off the machine, but it's clean and dry. I proceed to drain the steam boiler (which of course does make a watery mess) and slide out the electronics cassette to access the logic board. Sure enough, there is water under it. I had a reason for not drilling holes in the cassette when I had the machine in pieces, but I can't remember it and in hindsight, it was a terrible reason, no matter what it was.

I pull the logic board out and find green corrosion in the corner near the 8 pin connector for the flowmeter(s) and level probes. I dip an old toothbrush first in vinegar to dissolve the corrosion and then in rubbing alcohol to force the water out and quicken the drying process, which is finished off with some time under my wife's hair dryer at low temp and speed. I feel pretty confident in the results. I clean and dry the cassette, pop the board back in, slide the cassette back under the machine. Power on, pump starts running. I power back off, remembering that the boiler is empty and I have "Tank Present" set to "No". Switch this to "Yes" to hasten my findings and I'm greeted with "Refill Tank".

Here's what a close inspection of my logic board revealed: 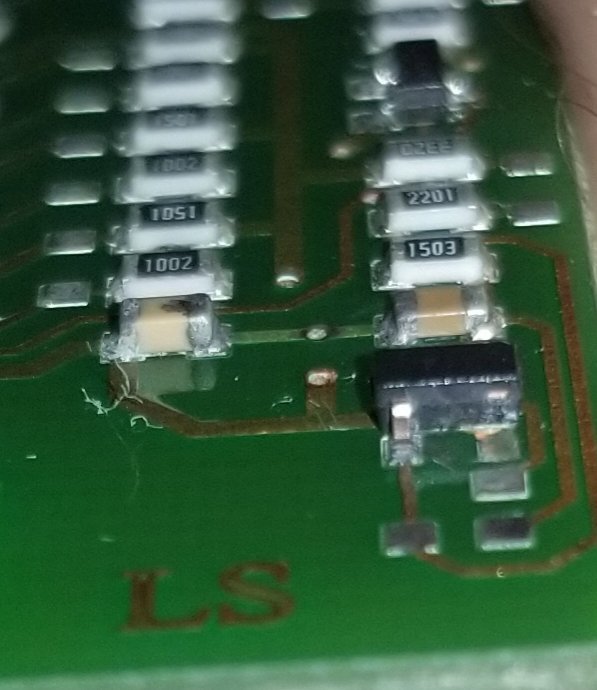 Looking closely at the minuscule SMD component that is missing a leg, I can read "A14G": 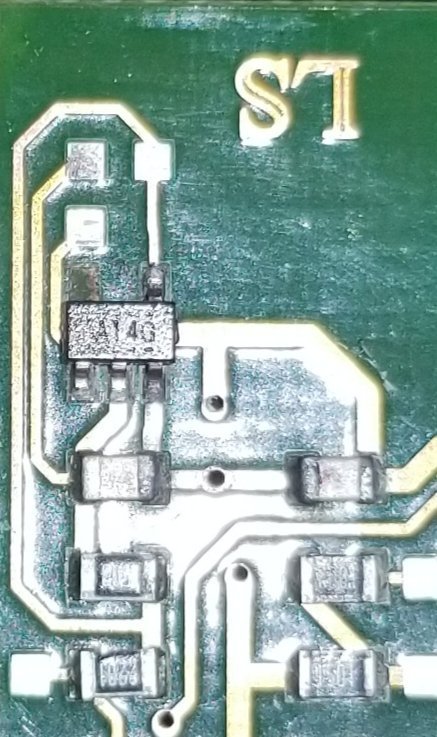 I search for "A14G datasheet" and learn that it is an inverter gate, and when I start looking into what these are used for, I learn of the Schmitt Trigger Oscillator. Basically, you apply a constant 5 volt supply to one of these A14G chips (through the pin that is conveniently missing on mine) and with a resistor and capacitor placed appropriately the output is a nice square wave that oscillates between 0 and 5 volts.

I took this image:

And turned it into this schematic: 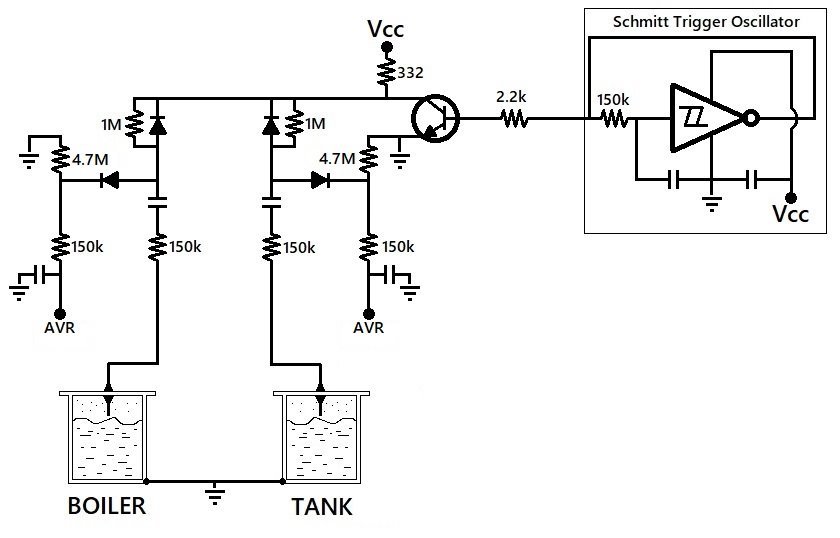 The pins that go to the tank and boiler level probes are the 4th and 5th in the string of 8 that run across the circuit board in the picture above the schematic. The Schmitt Trigger Oscillator matches perfectly with the comments from user jpboyt in the prior thread La Marzocco GS/3 - fried logic board?.

In this same thread, Pat suggests that

jpboyt wrote:someone with more spare time than I could/should trace the wiring from the probe wire to the micro-controller. Once all the components in the circuit are identified then we should be able to "follow the electrons" to see how this circuit works. One would also need to evaluate the form, voltage, and current of the signal wire going to the probe.

What I find interesting and I am hoping this discussion will reveal, is how the level probes get a signal to the CPU when they pass through a capacitor. I don't know the capacitance of any of the caps in this circuit, so without a scope, the frequency of the square wave and the effect of any filter caps on the circuit remains unknown. It appears, however, that the level probes effectively bring the capacitors that they run through "online" when they are grounded, which would tend to filter out higher frequencies (frequency of the Schmitt Trigger Oscillator?) And send a more constant voltage to the CPU. It's worth noting that there are also permanent filter caps in the circuit, though again, their capacitance (and their influence on the signal to the CPU) remains unknown.

One thing that I think this circuit shows is that the level detect circuit is far from a simple case of "probe grounds out on water and brings signal low". This circuit also explains why a single failure point (anywhere in the oscillator) will lead to both level probes failing. I welcome any circuit analysis from the experts to help explain the rest of this!

As making SMD repairs is beyond the scope of my abilities, I sent it off to Pat for repair, so hopefully this post will serve as a resource to others who have "dead" logic boards and are fearing costly replacements from LM. I still have to find the source of the contamination for my board, and I hope the above homework helps a few other folks who find themselves in a similar situation.

So my guess for the circuit (and why both Giemme and Gicar do these autofill boxes) is that they don't want the water to split (electrolysis). That would begin to happen at ~1.2Volts.

In theory you can do low voltage DC but then leakage sets in. The capacitor at the input to the AVR seems like an accumulator. It converts pulses to DC.

As the Schmitt trigger generator pulses the circuit, the pulses are either shorted to ground (the capacitor in line is probably a high value ceramic, hence a short for AC) - and is probably there to isolate DC that might float on the water probe. Or the pulses end up charging the AVR input pin.

That would be my guess. Nice work or reversing the circuit. And finding the SMD code for the Schmitt! SMD codes are hard core stuff. And they are not hard to fix with the right tools.
Scraping away (slowly) at the tyranny of biases and dogma.
Top

I am missing something - what discharges the capacitor when the water is high? While it won't charge, the reverse biased diode will prevent the cap from discharging.
Scraping away (slowly) at the tyranny of biases and dogma.
Top

Will it not discharge through the 1M resistor? When the Schmitt is high, the transistor sinks the whole trace above the diodes and 1M resistors to ground. I would think that would discharge the cap, no? *Edit* The diodes in parallel with the 1M resistors are forward biased, so Assaf is clearly referring to the permanent filter caps, which I mention below. */Edit*

Or are you referring to the filter cap on the way to the AVR? In that case, I see that I made an error in my schematic. The 475M is a pull down resistor before the reverse-biased diode. I'll fix that on Monday and update.

You are correct regarding SMD repairs. I lack the tools to make this easy and Pat has the whole testing rig (along with GOBS of experience) to verify repairs with minimal risk of releasing the magic smoke from other components.

Maybe it is 4.7M ohm? Or even 470k?
Scraping away (slowly) at the tyranny of biases and dogma.
Top

I'm still blurry on the difference in the signal to the AVR between tank full and tank not full...
Top

When the water level is high - the pulses are shorted to ground through the water and the AVR capacitor discharges through the 4.7M resistor.

When the water is low, the pulses charge the AVR capacitor.

I was a bit wrong on the series cap going to the probe. I think it is there to prevent any DC from appearing on the probe and corroding it.
Scraping away (slowly) at the tyranny of biases and dogma.
Top

Is this simply a matter of capacitor selection?
Top

No. The sensor cap sees AC. So for AC it is virtually a short (assuming its capacitance is large - which is my guess - otherwise it acts as an impedance which they would gain little from).

The AVR cap is after a diode. So it sees DC. It charges to some value determined by water resistance, and circuit resistor values.

AVR sees a DC voltage that changes when the water touches the probe. Hence the sensitivity parameter (low ion water would have a higher voltage when full).
Scraping away (slowly) at the tyranny of biases and dogma.
Top

So I see. I forget that pulsed DC with limited return path (4.7M resistor) does not equal AC. This means that the circuit must be tied to an analog input on the AVR. Very interesting. It makes one have a bit of appreciation for the design work on these controllers. Even if they got mounted in the worst possible location

Thanks for the analysis.

- Jake
Top
← Back •
By accessing this site, you agree to the site's terms of service. If you need help with the site, please contact us.