So I see. I forget that pulsed DC with limited return path (4.7M resistor) does not equal AC. This means that the circuit must be tied to an analog input on the AVR. Very interesting. It makes one have a bit of appreciation for the design work on these controllers.

Especially if there is a capacitor after it - that makes it a sort of poor man's integrator.


Even if they got mounted in the worst possible location

The location isn't the problem. It is the configuration.
1. Had they mounted the board upside down to the top of the box - No problem. Water would wick the wires and drip into the bottom of the case. The Switch is in the way so it can't be done now.
2. Had they used standoffs (I use 1-2 plastic grommets) - water capillary between the board and case would have been prevented... currently it is so close water is sucked in and can't evaporated due to capillary action (which reduces the surface area).
3. Conformal coating - had they conformally coated the board that would prevent most problems - both corrosion and shorts. I did this on mine using Plastic 70 (I think Dick used MG which should be better albeit both are Acrylic).
4. Drilling holes - that is what I was told they do today. At least it helps with evaporation - but it is very difficult to do in a density that would avoid the problems of capillary suction, etc.

The location itself is very good as it keeps the board cool. Installing it above or behind the boilers would have been awful.

My pet peeve is that they didn't mount it upside down in the box. 0 risks to board, 0 cost.
Scraping away (slowly) at the tyranny of biases and dogma.
Top

(there is a thread on levers now - which have quite a few rants about serviceability of pump machines - one who had two pumps fail, etc.
The GS/3 logic board is one such fail...

For whatever reason, espresso machine designs are usually very sloppy.

BTW - Not that sloppy Italian engineering skips levers - there is one thread in which 18A heaters for a lever were serviced by a 15A IEC cord - that made for nicely warped melted plastics - designed for European 220v which halved the current. If location of electronics is fun - try the Bosco - the Gicar is located in a box inside the drain tray! But there is definitely less that could go wrong!

I've learnt that it is imperative that whenever there is an issue with an espresso machine - fix it immediately - never ever procrastinate)
Scraping away (slowly) at the tyranny of biases and dogma.
Top

AssafL wrote:
BTW - Not that sloppy Italian engineering skips levers - there is one thread in which 18A heaters for a lever were serviced by a 15A IEC cord - that made for nicely warped melted plastics - designed for European 220v which halved the current. If location of electronics is fun - try the Bosco - the Gicar is located in a box inside the drain tray! But there is definitely less that could go wrong!

Seems to be a much better set up then LM could come up with.

Bosco puts the controller in a metal box which is located under the left side of the removable drip tray which overlaps the front surround on all sides. The tray drain is in the center & water never comes near the controller enclosure.
LMWDP 267
Top

I have zero evidence of a leak. Very frustrating.

My plan is to reinstall the board and run the GS/3 naked until I can identify something. I did this on initial startup and found a couple fittings that needed to be seated again and I left it naked for the better part of a month. I think I'll need to get lucky with a mirror once it's up to temp again to find the culprit.

I agree on all your points regarding the way they mounted the board. It seems that they could have decoupled the 3D5 from the rest of the electronics and perhaps mounted it under the touchpad with a little reworking of the expansion valve, but that would have been a much hotter location...

I've got holes drilled in the lower half now and I'll place the controller on some standoffs. But you can't get away with much more than a millimeter or two, near as I can tell. I'll grab some conformal coating, as well. No need to relive this, even if it was an enlightening process.

The only Bosco I played around with was a 2 group. I can't recall if the water hit the box (obviously it is sealed well enough - just a precarious position - one I think is still better than putting it next to the Sirai; there are many photos here where many a Gicar/Giemme box literally fall apart due to the heat).

The GS3 issue isn't placement. It is lack of care engineering the box. The position is great. Away from the heat. They had it 90% done.

BTW - it is unfair to Bosco to compare the two. An auto fill replacement box is cheap. A 3d5 is 3-6 times more expensive. LM really should have been more careful (note nobody laments the location of the SSR - if they fail it is a few 10s of dollars).
Scraping away (slowly) at the tyranny of biases and dogma.
Top

Jake_G wrote:I... But you can't get away with much more than a millimeter or two, near as I can tell.

Sounds about right. The location of the Power Switch interferes with raising it higher. That said, water is rather thin so capillary action should be reduced as it competes with gravity.

Remember to mask the connectors and blocks before con formally coating the board. I also cleaned it with iPA and dried it in a 50-70C oven before applying the coating.
Scraping away (slowly) at the tyranny of biases and dogma.
Top

Is there even a reason to coat the top of the board (and hence have the need to mask connectors)? It seems that unless the box is literally flooded, coating the bottom of the board, where there are no connectors to mask would be entirely sufficient to keep things safe. Am I missing something?
Top

No. You are not missing anything. But why risk it anyway? Masking the connectors is easy to do (I used Scotch painter's blue masking tape).

Edit: In other words - won't it feel stupid if it does short on the top side to be proven wrong? Remember the water wicks with the cables so puddling on top isn't far fetched.
Scraping away (slowly) at the tyranny of biases and dogma.
Top

Curse you and your sensible logic!

I've updated the schematic to reflect positioning of the AVR diode, and the 4.7M pull down resistors.

Big thanks for your help in understanding this circuit. I really appreciate it.

I got a progress photo after the failed chip was removed: 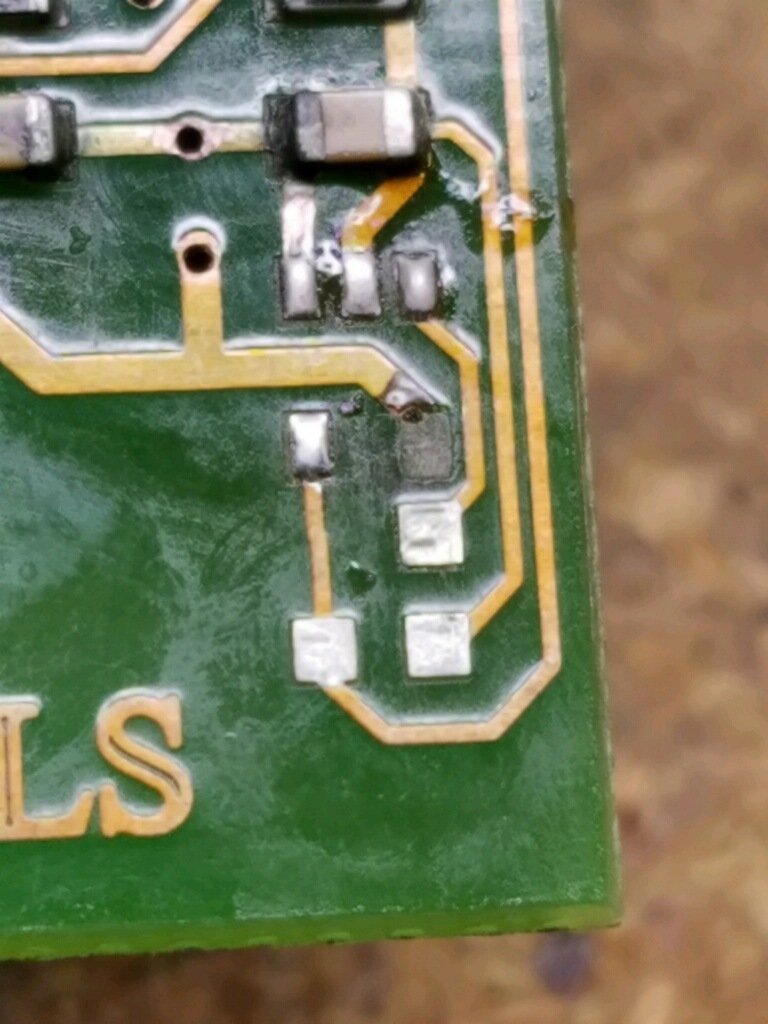 I have a feeling this failure was a long time coming. It is possible that the water beneath the board was in fact from my sloppy efforts to drain the boiler (I used the supplied drain hose, held over the 3/8" BSPP Male threads on the ball valve) and the corrosion and eroded leg and pad were just working themselves to an oblivion ever sense I fired it back up. Though it does seem likely that persistent moisture accelerated the corrosion and ultimate failure. Sadly, none of my photos from when I first tore the machine down include a good view of this cluster of components.

I'm awaiting the repaired board to apply a conformal coating (likely MG, but we'll see what's available) and get everything back together to check for leaks.

- Jake
Top
← Back •
By accessing this site, you agree to the site's terms of service. If you need help with the site, please contact us.