HB wrote:A convincing experiment to determine the effects of vibration would be a rotary pump versus an air pressure-driven water chamber. I recall someone saying the new Techno had such a beast, but I didn't check it out at the SCAA conference.

Yeah, I was the one who posted it. It is not a standard feature of the new Techno. A small company from Taiwan The Formosa Coffee Company used a Techno to illustrate the effect of an air pump. They were looking for distributors for their air pump and concept. The crema coming out of that Techno was Versalab crema. The blend they used had no Robusta in it. I attributed it to the air pump, as a default hypothesis since the only other variance on that machine was PID. As I pointed out on a previous thread, that experiment leads me to believe that pump pressure technology is worth exploring. It appears that the flat (as opposed to vibrating) pressure of an air pump may make a difference. Another idea would be a pressure profile programmed into the pump by the Barista. 1 bar during pre-infusion, slow ramp up thereafter, a hump, a descending profile etc. It is only hypothetical at this stage but worth exploring.
Abe Carmeli
Top

This is one area where machines are potentially lacking. I mean, temp stability is great, but what is the next phase?

The problem with LMs remain with the procon and the so-called 'ramp-up'. Then there is the dispersion screen design. The water line terminates at a screw with three holes in it - where the water flows out, a mere few mms above the screen. The potential* problem with this is an unnatural extraction. The shop I worked at used a Rancilio Z11 hydraulic machine: that is, a larger piston pushed down on the smaller brew water chamber. The beauty of the brew water chamber is the volume would rush in from the 18 liter boiler, into that space, essentially creating what should be a relatively stable (ie: not line fed) mass of water. Of course, the Zed isn't a perfect machine, and requires a lot of work, but it pulled a really nice shot, that, IMHO, was technically superior to the offerings of the local shops running synesso or LM.
Top

The conventional wisdom has always been that vibrations aid crema formation, for instance, that vibe pumps create more crema than rotary ones. It's something I didn't notice when comparing the vibe and rotary Jjuniors side by side. It could be an effect of the slower ramp up of vibe pumps when the gicleur is large (like in LMs). The Juniors have tiny gicleurs and long dwell times, so that may have been a factor.

I think there is something to the idea that no vibration at all produces superior taste. It would be nice to side by side the tricked out Reneka against a conventional rotary one.
Top

another_jim wrote:I think there is something to the idea that no vibration at all produces superior taste. It would be nice to side by side the tricked out Reneka against a conventional rotary one.

Another advantage of their air pump design is that it draws water out of the Brew Boiler during a shot, unlike all other pumps that push water into the brew boiler. It adds to temp stability. At idle time, it refills the boiler. I'm going to shoot an Email to that guy and see if they have a model we can test in the U.S.
Abe Carmeli
Top

Good point, Abe. Then you could also use a smaller boiler for prosumer units since incoming water temperatures aren't an issue. Now that I think about, shouldn't an air driven pump behave a lot like a commercial spring lever machine w.r.t. pressure? 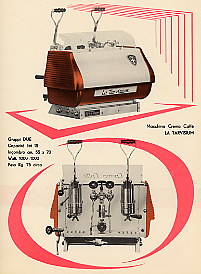 And the tricked out modern rendition (which earns my vote as most lust-worthy espresso machine on the planet): 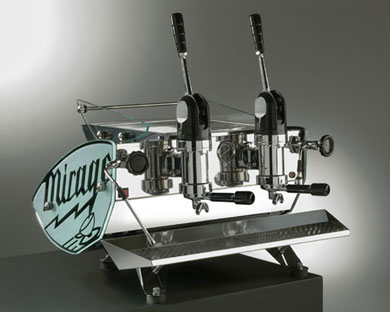 The BGA booth was supposed to have a lever machine from Kees at the SCAA conference, but it got held up in shipping. That was a big disappointment. I wonder why commercial lever machines haven't made a comeback? Maybe worries over occupational overuse... ?
Dan Kehn
Top

I was very disappointed that there was no lever at the show. If the internals performance was comparable to a mirage, I would have seriously considered one for opening my own shop.

I'm not sure I understand perfectly how the air pressure systems work...

But, if they are a chamber that contains water and pressurized air together, then the pressure is used to push the water out the bottom thru the coffee...

Then a significant factor in taste, crema generation, etc. would be that the brew water would have a *much* higher dissolved air content than your typical boiler setup, which tends to remove dissolved gasses.

9 BAR of air over water and you're gonna get some pretty good "nitrogenation" (among others), then during extraction, that would tend to come out. I'm not an expert on coffee extraction, but I'd bet my left.... uh..leg, that there would be a significant effect on flavor and feel between the two methods....

My first thought when reading this thread was the http://www.illy.com/Illy_En/Company/History.htm illetta .
I remember reading this in Illy's first book on Espresso 12 years ago.
This method uses compressed air. I asked myself then why this method never became popular.

lino wrote:Then a significant factor in taste, crema generation, etc. would be that the brew water would have a *much* higher dissolved air content than your typical boiler setup, which tends to remove dissolved gasses.

9 BAR of air over water and you're gonna get some pretty good "nitrogenation" (among others), then during extraction, that would tend to come out. I'm not an expert on coffee extraction, but I'd bet my left.... uh..leg, that there would be a significant effect on flavor and feel between the two methods...


The solubility of air in water is only about 1/10th as much at 200F compared to the solubility at room temp. So your...uh...leg may or not be safe.

Have you had kids yet?

In winemaking nitrogen does not dissolve in wine. CO2 and O2 do. CO2 is not a problem but O2 is, because of oxidation. I would think that the ratio of air to water is so small that it would not impact flavour. Any further opinions are welcome.

Cheers,
Arthur
Top
← Back •
By accessing this site, you agree to the site's terms of service. If you need help with the site, please contact us .