So if I am reading HB's posting correctly, all I need to add a permanent brew pressure gauge to my millennium is a couple of fittings and this gauge from the gaugestore.com? The spec on that gauge is for a max of 140f, wouldn't it get dosed with the same 203f water that hits my E61?

If I decide to do this I will post some photos. The hardest part looks to be putting the hole in the face of the machine. I would take it to my local fabricator and have them laser cut the hole so it is exact. I also thought about insulating the boiler.

This one also includes the snubber to reduce the pulse.
Dave Stephens
Top

I tee'd the tubing coming from the pump, so the water isn't heated at that point. The drawback of this placement is that the gauge is subjected to more intense pulsing, so needle flutter is more likely. Manufacturers install it further downstream and use a coil of thin copper tubing to avoid flutter even with a dry gauge. The thin tubing also dissipates heat which would otherwise be transmitted to the gauge. See the tee below from the Andreja Premium: 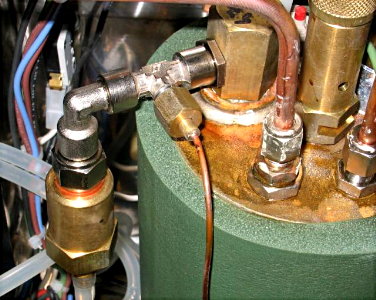 If you're considering a permanently mounted gauge and it will be close to the boiler, all copper tubing similar to this would be best. The splicing of the pump outlet tubing works well for an externally mounted gauge or a temporary setup.
Dan Kehn
Top

I see now, I thought you were putting the splice between the HX and the brew group. I have to give it some thought but I may give it a go. After all, it is just plumbing, it's not rocket science. They wife may have my head, the new Mazzer was a surprise to her. I just ran new water line and installed a filter in line just for the machine my float valve from Chris arrives Friday to complete the process.

This is starting to turn into one of those consuming passions. I have to ask myself 'will this make any difference in my quality'. Then I think, who cares, it looks cool.
Dave Stephens
Top

cannonfodder wrote:This is starting to turn into one of those consuming passions. I have to ask myself 'will this make any difference in my quality'. Then I think, who cares, it looks cool.

Oh, buddy, don't I know all about that! I spent an extra $250 on La Valentina Levetta over, say, an Andreja Pro... I tell myself it's for the great components, and that's probably true, but in the end, there's definitely a "who cares, it looks cool" to it. I could probably get just about the same from either machine, and reliability is still an odds game either way...
Top

Dan remarked that some people have added bleed valves to the PF gauge setups to simulate the pressure while coffee is being brewed. But ideally, it doesn't matter, does it, whether some pressure is released through the PF during brewing and some through the OPV or whether all is released through the OPV (as with a blind filter). I found a difference between max pressure during brewing and with a blind filter, presumably due to non-linear spring action in the OPV, but it wasn't more than half a bar. So I don't see the value of a bleed valve.

for those that want to tune their OPV using parts commonly found at most hardware or tool stores for around $20: buy a small p.s.i. gauge, 3/8 male pipe thread, and the scale must be capable of at least reading 130 psi which is equivalent to 9 bar. Preferably 130 should be the middle range of the scale as that is where gauges have the best calibration. Buy 3/8 female to 3/8 female pipe connector either barrel, 45 or 90 degree(brass) and teflon tape. Remove the spout from your portafilter. Screw on the barrel connector using tape. Connect gauge to barrel connector using tape as well. Install portafilter minus basket to machine and hit brew button. Check for leaks, tighten if necessary and read gauge. The needle will bounce but you are shooting for reading of the middle range. Discussed here as well.
Top

do anyone know if there's an how-to on how to add a pressure gauge to Rancilio Silvia? Would really like to know the pressure of the shots I'm pulling... and, is there a way to add the ability to adjust the pressure on the Silvia?
Top

CG and alt.coffee have a huge Rancilio Silvia fan base. Sometimes searching them isn't easy without a very good idea of what you're looking for. I found some nice matches with the rather obscure keywords "+Silvia +SwageLok". HB's own Resources page links to related topics, notably the famous Silvia Pressure Modification.
Dan Kehn
Top

But the problem is what parts do I need to get this done? (and links to where I could get them)
Does the pressure gauge come with a hose which I just have to connect to a T-fitting between the brewer and the boiler? And where do I find the parts needed for the pressure control (like the one from the post "pressure gauge on miss silvia?"
Top

pinpoint wrote:But the problem is what parts do I need to get this done?

It's difficult to give precise weblinks beyond what I've already noted earlier in this thread since you're in Sweden and few online vendors based in the US will ship overseas. I advise you to follow the previous discussions, which include specific parts from places like www.gaugestore.com:It shouldn't be difficult to source them locally. Our neighborhood hardware store has the gauges, but I had to order the snubber online. BTW, don't be put off by the titles, these threads do address your question if you're willing to read past the extraneous information.

PS: I see that you cross-posted your question on CoffeeGeek (link) with pretty much the same responses. In general, I discourage cross-posting across sites since there is some overlap in membership; if you must, please consider including a pointer back to your other posts to avoid redundant responses.
Dan Kehn
Top
← Back •
By accessing this site, you agree to the site's terms of service. If you need help with the site, please contact us .