Temperature of steam versus water in a boiler

Nominally, the water and steam are in a sealed vessel are at equilibrium, so at the same temperature and pressure. In reality, the surface of the boiler is cooling, and the heater is intermittently heating. Therefore, there are thermal gradients, and "weather," i.e convection currents, inside the boiler. However, this is true of both the steam and the water.

Your real concern is to make sure the control system is happy by picking a spot that both reflects the average temperature in the boiler and which responds relatively rapidly to the changes in the heater and the boiler refill.
Jim Schulman
Top

If you want to put the probe in the steam use a smaller diameter probe.
See Omega TC Time Constants
Ian's Coffee Stuff
http://www.ieLogical.com/coffee
Top

My intuition was always that the temperature probe should be submerged in the steam boiler to control it with the fastest response and least overshoot: liquid water probably transfers heat better than steam, right? So that's how I put my thermocouple in my Elektra PID project, submerged. It certainly worked. However, I recently got a GS3 and was intrigued to find that the thermocouple seems to be in the steam portion of the boiler: 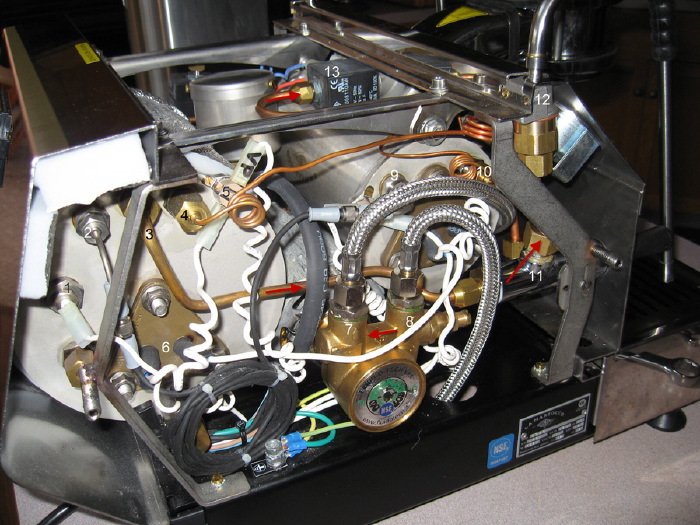 The part labeled 2 above is the steam boiler thermocouple (Source: GS3Cafe thread).

Apparently chasr was also surprised, as in the original post he mixed up the thermocouple and level probe (which is #1).

I guess it's possible that the probe is bent down, but I doubt it. I can only assume my intuition is wrong, as the GS3 doesn't have any trouble with overshoot when recovering from steaming/autofill. As jim says, the point is to choose steam boiler temperatures that's adequately (but not overly) sensitive to autofill/heating bursts, and I'm not even sure that's such a big deal on the steam boiler (probably is much more significant on the brew boiler). If It were me doing a PID retrofit, I'd be looking more for an empty fitting to attach the probe a lot more than musing about the best possible place for there to be one.
Nicholas Lundgaard
Top

Hi All,
Here is the reason the GS3 probe is in the vapor and not the water. There is a direct relationship to temperature and pressure at steady state , pv=nrt. This is why it is possible to control pressure by temperature. Sorry to explain things you probably already know. At steady state there is water and saturated vapor in the boiler.

Now there is a trade off. The vapor has less conductivity than the water so the probe takes longer to react. This time difference turns out to be less than the difference between vapor and water to change in temperature. To account for this you can use a PID equipped controller. This way it can react to the small changes in temperature better than a non- PID equipped controller.
Top

so would you recommend sticking the thermocouple above the water in a brew boiler as well?
Top

The brew boiler is a different case. Since the brew boiler is hydraulically locked, or saturated, or completely filled with water (just covering my bases on language), you do not have this option. So in this case the probe must always be in contact with the water.


How about an HX machine then?
Top

It works exactly the same way (as controlling a steam boiler), but there is a pipe through the boiler that is filled with water (the heat exchanger). This water is under line pressure (or pump pressure), which is MUCH higher than the pressure of the steam boiler, usually. At that pressure, the high temperature is below the boiling point in the environment, so the water remains liquid. if it didn't, a heat exchanger wouldn't work because the steam would prevent the thermosyphon loop from flowing.

In any case, the behavior of the thermosyphon is basically irrelevant to the control of a heat exchanger boiler, because it's operationally identical to a steam boiler. Brew temperature management is carried out by flushing, which introduces cold water into the heat exchanger and causes it to be mixed till brew temperature is reached at the head. Controlling that elegantly and repeatably is a design challenge, but of a totally different type than deciding where to put the thermocouple in the boiler.
Nicholas Lundgaard
Top

Just a few more comments. A traditional HX machine could really be called a dual boiler machine with one heating element. It is just like explained above. A boiler inside a boiler. The inside boiler (brew boiler) is completely filled with water. Now inside the brew boiler the temp of the water can rise to the temperature of the steam boiler. Cause that is what is heating the water inside of it. The water does not boil because it is under pressure and at steady state pv=nrt applies. As the water heats inside of the brew boiler it has no where to go when it expands. To account for this there is an expansion valve, sometimes referred to over pressure valve (OPV). This allows some water to escape to let some of the water out so the boiler does not explode.

Now you might ask why do they do this. It is because water for brewing should be around 200 degrees F. If you heated the steam boiler to 200 degrees F the pressure would be pretty low. Not enough to push the water through the coffee in 25 seconds. If a pump is used then the system must be incompressible so the force exerted by the pump acts on the top of the coffee. Since water is incompressible the brew boiler has to be completely filled so that there is no compressible fluid in the system (i.e. air or vapor).

Sorry to explain things you probably already know but sometime my brain only works one way. Instead of changing myself i have learned to just live with it. Hoping it does not piss too many people off.


Bill
Top
← Back
By accessing this site, you agree to the site's terms of service. If you need help with the site, please contact us.