My machine is a month old and I have been noticing that my brew boiler temp on startup is around 14 degrees Celsius lower than the ambient temperature. Machine is using the reservoir, and the steam boiler temp matches ambient temp. Brew temp seems higher than the set temp, but I'm still quite new to espresso so I'm not the best judge.

With temp set at 94C, medium roast beans, and 18g dose, I have to restrict flow to 6 bar or less with a shot time of 18-20 seconds to get something that doesn't taste overextracted.

I have checked the pid settings against the settings on Clive's site and the only one that doesn't match is the E1 setting. They recommend 27, mine is set at 14 and has a maximum possible value of 25 so I'm guessing this is due to my machine being set to Celsius.

Any ideas of what might be going wrong?
Top

Hi Ben, and welcome to HB.

Profitec's default Celsius E1 offset for the Pro 700 is indeed 14. The default Fahrenheit offset is 26-27. See the "Recommended Settings" table on page two of this pdf:
/downloads/ ... elsius.pdf

But the correct E1 offset for your particular machine could be higher or lower than the default. This discussion might be helpful:
Adjusting PID offset temperature to avoid flash boiling
Top

As Wes (threesips) points out, nothing wrong with your machine... Remember that the displayed temperature is the actual minus the offset. So take your ambient temperature (when the machine is just turned on) and subtract the offset of 14 and that's what it will display.

I'm not sure what you mean by the brew water temp is 14 below the ambient. By ambient, do you mean the displayed temp on the PID for the brew boiler? .. so if it shows 94, are you seeing brew water at 80? . Sorry.. maybe stupid here.. I've always used 'ambient' to mean the room temp. Sounds like your brew PID shows 94 but you are measuring brew water lower than that?

Any chance the "Overextracted" is really under-extracted? Caused by brew water too cool?

The only way to really test that your brew water is what you expect is to borrow a SCACE, or something equivalent, to see if the offset is accurate. The offset is intended to take into account the thermal drop from the brew boiler, through the E61, to the PortaFilter. It assumes the machine is properly warmed up (E61 groups take up to 45 minutes to warm up, regardless of what the Profitec manual says). If you put in a cold portafilter, it can also drag down your E61 temp and cool your brew water more than the offset.

So if you are pulling a shot after 10-15 minutes of turning machine on, you likely will get cool brew water.. same if you put a cold PF in the group. Just guessing.. and maybe you have already considered all this.
Top

Bluenoser wrote: So if you are pulling a shot after 10-15 minutes of turning machine on, you likely will get cool brew water...

I would venture that it's more of a certainty than "likely".

On my Expobar DB, the PID read 197ºF after 25 minutes from a cold start, but the group was nowhere near hot enough to pull a shot: 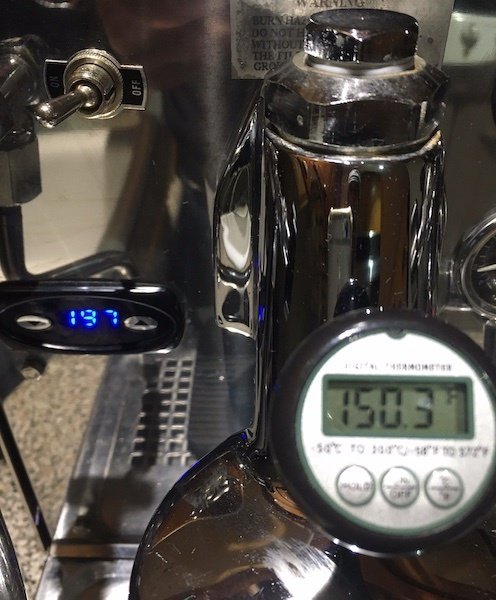 Hi all, thanks for the replies. You have all helped me realise what was wrong.

My better shots were when the machine only had a 10 minute warmup, so that would mean actual brew temp is probably too high. So I dropped the E1 offset from 14 to 11 (keeping t1 at 94) which improved my shots but they still weren't right. I have now dropped the offset to 9 which is in the ballpark for where I think it should be, based on shot quality in the general espresso recommendation of 18g dose, 36g out, 20-30 seconds, 7-9 bar. I feel like I should be able to dial it in from here, so i'm happy about that.

Are these machines temperamental? If my machine is a true -5 offset from standard now, could it become +5 offset in the future for no good reason? Or will a lower offset be a characteristic of my machine?

Now to vent my frustrations...

If there is such a large variation between machines, shouldn't Profitec calibrate each machine at the factory? Or at least warn you about it in the manual? I spent weeks blaming myself thinking my puck prep was causing channeling, but now I think the problem might have been high temp / flash boiling. Now I have to spend hundreds of dollars extra if I want to get a good idea of my actual brew temperature but I think I will hold off and see how it goes from here.

BTW, @bluenoser, I meant that when I turned the machine on, brew temp on the PID was 14 degrees lower than room temp, which I was thinking might be a problem. Threesips and Josh's responses explain why it isn't a problem.
Top

I understand what you meant now..

I also have a beef with Profitec.. they have very little info in their manuals and much of it is just plain wrong. (I have a Profitec Pro 500). All E61s require about 40 minutes to heat, unless they superheat the brew boiler during warmup to shorten the E61 heat up. Profitec don't do this, as far as I know. Their site also doesn't contain any technical info that will help you understand the nuances of running an E61 group and how it affects the ultimate brew water temp. Thus forums like this are really important. I would say the vendor is more responsible for calibrating each machine. Some threads in HB have noted a Pro700s coming with zero offset; (maybe after a repair) . If the vendor calibrates, then a local customer is getting something set for their altitude and likely their seasonal ambient temp and will be close to the actual brew water temp.

Now I feel a SCACE is one of the best ways to determine where your *real* brew water temp is. However, it is a $600 piece of gear. I borrowed one for my machine. Maybe you can find someone with one, or if your vendor is local, they might let you borrow. You only need it for a few hours. (Assume they've set the flow properly for you). Many ultimately build a crude one for themselves.. I did this somewhat, but never had confidence mine was accurate until I borrowed the SCACE.

If you get it calibrated, then you'll be able to follow roasters extraction recipes a little more precisely. Or if you move from one machine to another, the numbers will be the same. (Make sure your machine is on for at least 45 min before calibrating)

I personally think manufacturers should find some way to put a temp sensor near the water exit (near the screen).. There are umpteen posts about users with E61 groups who have extraction issues that end up being caused by improper brew water temperature; usually caused from a) too short a warm up. B) inserting cold PF. C) bad offset. D) improper flushing (HX)
Top

DaveB wrote:I would venture that it's more of a certainty than "likely".

On my Expobar DB, the PID read 197ºF after 25 minutes from a cold start, but the group was nowhere near hot enough to pull a shot:

Yeah, Profitec manual states to warm up for 15 minutes then pull shot.. I was first 2 months trying to figure out if I liked the taste of espresso after all.

. Then I discovered HB forums.
Top

LCHF wrote: Now I have to spend hundreds of dollars extra if I want to get a good idea of my actual brew temperature...

No doubt a SCACE will give you an accurate temp reading, and if one is available to you, that's great. But I and others have found that if you follow the steps in another_jim's post on calibrating offset temperature, you can come very close without any additional equipment or expense.

I also had your concern that over time the reset offset would drift. So a couple of weeks ago I checked to see if that had happened. I increased the T1 brew temp to 99 degrees Celsius, waited 30 minutes, and could just hear the beginning of flash boiling when I lifted the brew lever. I then increased the brew temp by one degree to 100C and again waited 30 minutes. This time when I lifted the lever there was vigorous flash boiling. That makes me believe that the offset I settled on when I re-calibrated the machine several weeks ago was correct and has remained stable. I'll probably repeat this test every now and then just to see, but I no longer worry there's something wrong with my machine.

From your description it appears that you've tried a few different offset values in an effort to find a good one. If you haven't already, I would encourage you to take the time to follow Jim's guide and zero in on the best number for your particular machine. It made a huge difference in the quality of my shots.
Top
← Back •
By accessing this site, you agree to the site's terms of service. If you need help with the site, please contact us.