I've never used a tamper mat, not sure if I need one. With our SL70 I always have had 5 spare filter baskets, I fill, level and tamp directly in the baskets then put them in the PF as I need them (this speeds drinks along). Since the baskets are flat bottomed I've never seen the need for a tamper mat. However, as we are moving to a Vetrano, I won't be using multiple filter baskets as I assume knocking out a dry puck and refilling is about as fast as having prefilled filters baskets ready to go (I hope).

Just wondering what the consensus is, useful or useless?
Fr. John
Top

Very useful if you tamp on a wood counter top. I have a small and thin rubber puck I put on a tea towel I have folded into quarters. It keeps the bottom of the naked basket, or the double spouts from cutting or denting my work surface.

Other than that, I don't think there would be any improvement in the quality of the tamp.
Dave Stephens
Top

Well, I tamp on good ol' formica. I'm pretty sure that the formica is going to take a beating if I continually tamp on the double spouts. I suppose I don't have much choice but to use a mat.
Fr. John
Top

I tamp on a table top. The pad makes a major difference.
Top

Are you saying you do use a pad?
Fr. John
Top

Fr. John wrote:I'm pretty sure that the formica is going to take a beating if I continually tamp on the double spouts.

Not if you go bottomless. I don't like the spouts to touch anything including the countertop, even though it's tolerated in barista competition if followed by a wipe. So instead I'll lay a towel over the edge and tamp with the portafilter pressed against it. The LM spout is great for this usage:


HB wrote:From research notes from the Buyer's Guide to the Elektra A3... 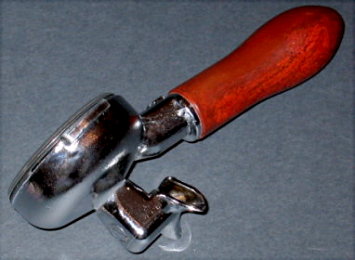 Notice that I changed the portafilter spout to the squared-off La Marzocco open-style spout. The narrow distance between the spout ends allows it to easily catch the two streams in a single cup, plus as an the added bonus, the spout acts as a nice "ledge" for tamping on the countertop's edge. This avoids the possibility of picking up grinds and who-knows-what by tamping with the spouts directly on the countertop.

I have a rubber mat and it shows the dents of a lot of tamping before I switched to bottomless and countertop edge tamping.
Dan Kehn
Top

I use a bottomless PF and I still like to use a mat. I guess the biggest reason I like a mat is the quieting effect. No sound on the counter from the PF or tamper. (I also set my tamper on it between shots). I use a gasket on my knockbox for the same reason- it really makes a big difference in cutting down the rapping. All right, all right, maybe I'm just a little grouchy to all that banging noise first thing in the morning before a couple of double ristretto's...

I have some indentations in the mat from the PF, so I'd think it does protect the counter top and the milled bottomless PF edge to a degree. Downside is, the mat is one more thing to clean up.

BTW, I got mine from the good guys at EPNW. Here: http://www.espressoparts.com/product/6030
Top

I continue to use my mat after going bottomless; it's nice to confine the stray coffee grounds to one area and if you tamp on a mat most of them will end up on the mat. It also has a nice feel. While not necessary, the price is right so just buy one and if you don't like it, invent another use for it.
What, me worry?

I use a mat. I am tamping on a Formica surface as well. I believe that prolonged tamping directly on the Formica will unquestionably damage the counter and probably the Porta-Filter as well. The tips of the Porta-Filter leave indentations in the mat that stay. The forces on the small tips of the Porta-Filter are quiet strong. Most of the excess grounds ends up on the mat making clean up easier. I wash the mat after every use so it is easier to keep clean and sanitary. Of course, I don't really know if the mat is of a food safe material-it is the small mat from EspressoParts.
Bob Craige

Um, look at that counter top.

You can see why I care less what goes under my bottomless portafilter when I tamp.

Oh - this is an old pic, my Mafac sits where Rocky used to.

Ann
Top
← Back •
By accessing this site, you agree to the site's terms of service. If you need help with the site, please contact us .