Note: this topic is based on my visit to the Slayer factory yesterday, which you can read about here.

At my visit to Slayer yesterday, I was lucky enough to get an up-close look at the near-complete first single group Slayer. I got to see for myself many of the things I've been wondering about. What a treat. You can see my full photo set on Flickr. The remainder of this post is a summary of the new information I've gleaned from talking to the guys at Slayer and examining the parts, etc. in the machine firsthand.

Instead of using a cross beam (which would have been extremely overkill in this form factor), Slayer opted for what appears to be 1/2" slabs of aluminum. These are strikingly thick and impressive in person. 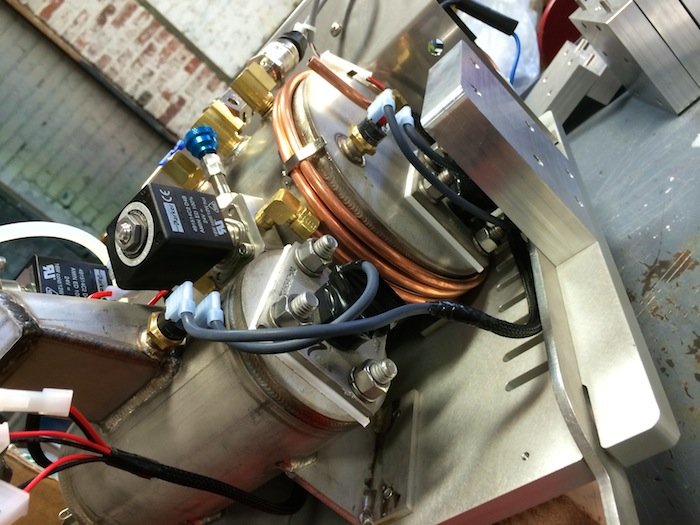 Note: the tech, Devon, made it clear that the electrical tape you see here was only temporary for testing, and would be replaced with heat-shrink tubing in the final assembly.

The new Slayer has dedicated boiler drain valves plumbed right into a drain manifold. Thoroughly draining this machine will take seconds: No hooking up the drain valve to a hose, no draining through the OPV or having to recalibrate it after every drain. 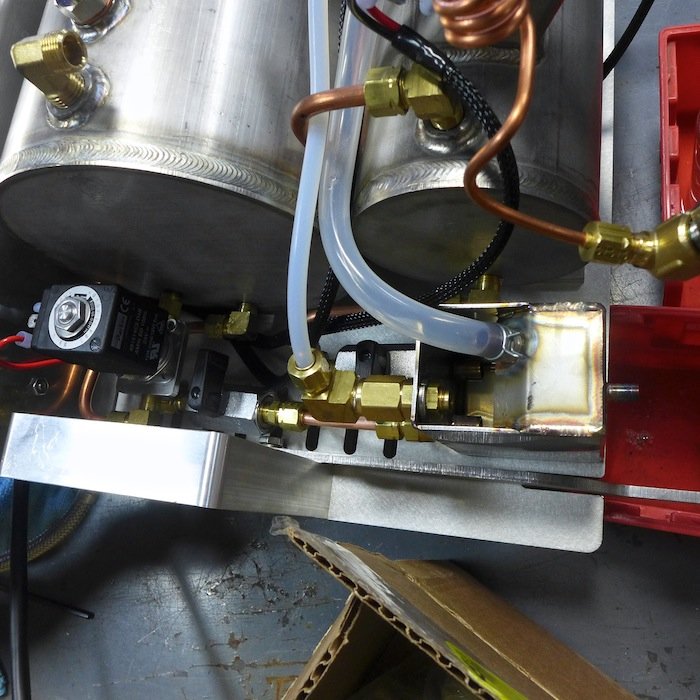 This drain box connects the boiler drains, OPV, and 3-way valve exhaust. It will connect to the drain tray.

Some of the earliest prototypes I saw appeared to show the brain board of the machine on the bottom, which seemed like an iffy call. I'm pleased to see that Slayer has put the brains of the machine about as far from harm's way as they could reasonably be. 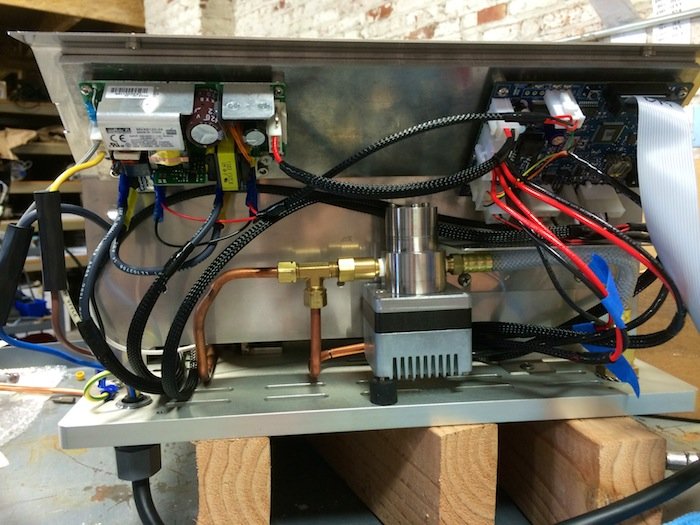 Above, you can see the 24VDC power supply on the left and the brain board on the right. The pump inlet is a braided hose (intended to minimize vibration noise), and the pump is mounted on a pair of rubber isolation mounts. Devon ran this pump against a blind filter, and it was remarkably quiet—much quieter than my own gear pump at home. Slayer says they worked very hard on the problem of noise with this pump, including getting a custom gear size, and it seems to have paid off well.

Note also on the right, the brain box is shielded from the pump by a stainless steel sheet. Devon informed me that there's another one on the left to shield the power supply, but it isn't installed yet. 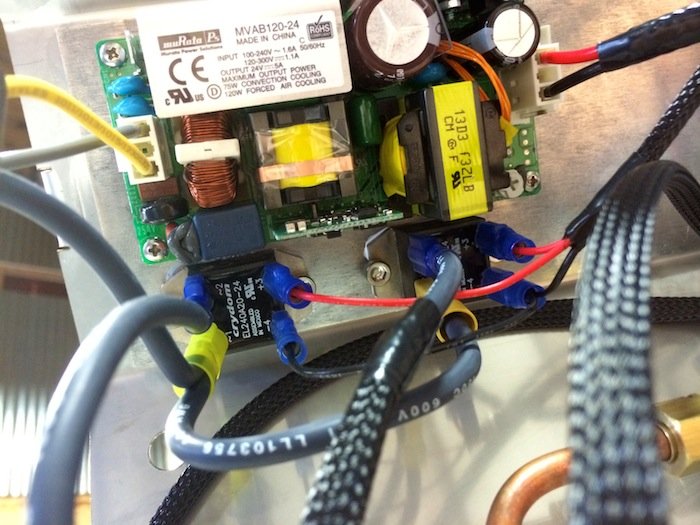 Note the miniature 15A Crydom SSRs. Nice choice for a component that usually wastes a lot of space. 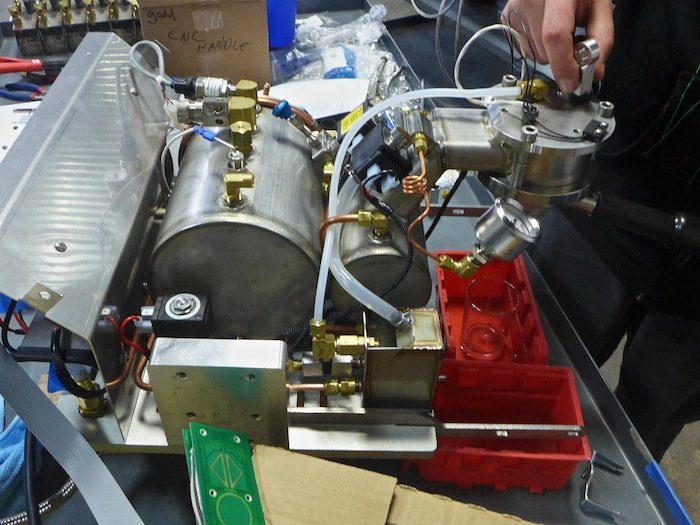 Here we are checking out the pump by sticking a magnet on the sensors for the group actuator.

I finally got a chance at the show and in the studio to get a sense of how you program the Slayer 1-group, which I've hardly seen anything about wherever I've read. So it was pretty cool to finally get to check it out. 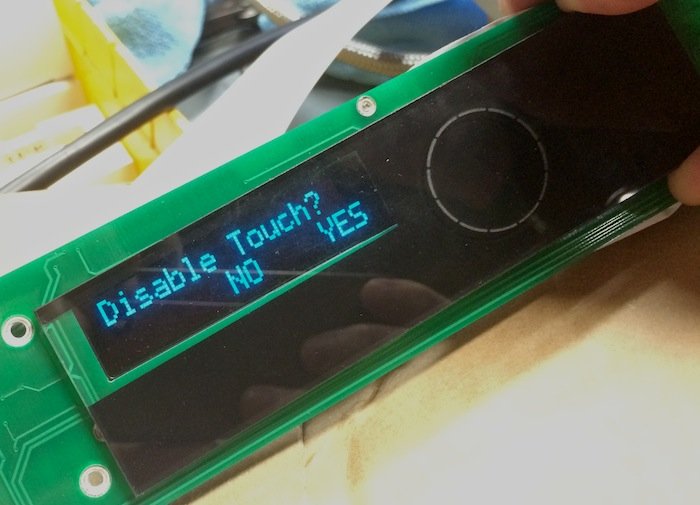 Activating a special mode to disable the screen for a few seconds to clean it.

The touch screen has 3 main touch areas:
In practice, it feels a little like operating an ipod with a shorter screen. It's clearly going to take some getting used to, but after that it seems to be pretty easy. Devon was flying through the menu with ease. It was very cool to watch.

Finally, I just want to itemize a few programming features that the machine has that don't seem to be documented online yet.
That's it for now. If I find anything else out before I receive my machine, I will post updates in this thread.
Nicholas Lundgaard
Top

I notice the copper wrapped around the steam boiler. Is that from the brew path? If you turn off the steam boiler, will you lose pre-heating/temp stability for the brew boiler maybe?
Darmok and Jalad at Tanagra
Top

Yes, the brew boiler preheat is accomplished via heat exchange through that wrapped copper tube. If you leave the steam boiler off, you will not get any preheating of the water entering the brew boiler. So it's probably not the best idea if you're planning on making a lot of shots in a hurry, but likely fine otherwise.
Nicholas Lundgaard
Top

Thanks for posting the pictures.

The pump seems very interesting and seems to be setup very much like the video below, complete with the needle valve. It's pretty quiet but definitely has a unique sound. I'm guessing the end number of the model (in the Slayer's case, 209) is the size of the gears? And this one from the same guy showing the max flow rate.
Merle
Top

is there any chance you could end your questions with punctuation that indicates a question; this is not an SMS session; it's frustrating to have to waste the extra time to read your lazily formulated sentences


michael wrote:very cool; do the pre brew times and the brew times show up on the swipe screen

Prebrew and brew times are displayed separately on the screen during and after shot extraction.

Yes, the prebrew flow rate is set by that needle valve with the blue adjustment knob. Brew pressure is set by programming in the speed of the pump. To do this you enter programming mode and select the brew pressure setting for adjustment. You are presented with a number that appears to be % of max speed or something like that. While in programming mode, you can extract a shot and adjust the pump speed by pressing the up/down buttons till you get the pressure that you want as the shot is flowing. You can also do it against a blind filter, although that would be less accurate.

The handle on the group is a three position switch.
These are 3 discreet positions on the handle, and there is no space in between them.


michael wrote:do you know when delivery of the single group model is scheduled to start

No, I just know that mine is scheduled to be shipped the first week of June. That sounds a little optimistic, but I hope to get it by the end of June at least. I'd bet the first one will ship out sometime this month.
Nicholas Lundgaard
Top

So there is no line pressure prebrew/pre infusion? All P/I is pump controlled?
LMWDP 267
Top

I did the videos! Mine is 4mm gears, same pump used by Strada (but different motor).

As far as I know, the 9mm gears should have higher flow but max pressure around 9 bar. I believe it reaches higher pressure, as this 204 model can reach way higher than 12 bar, but the recommended maximum pressure is 12. Maybe they (FOT and Slayer) could find a size between the 4 and 9 model to improve noise and reach the pressure needed.

Finally I'm using it at a setup (modding a BZ09 as a espresso only machine, already using it at work). Most of the time we use pre-infusion (around 2-4 bar), go to higher pressure, and then back to low pressure if the flow is too high. Hard to think about other profiles, but as I have the potentiometer and Arduino at hands, I can choose the low and high pressure on the fly etc. Therefore the profile style of Slayer makes sense in the practical world.

John, it seems the pump is always full speed, so the low pressure is given by the needle valve.

uscfroadie wrote:The pump seems very interesting and seems to be setup very much like the video below, complete with the needle valve. It's pretty quiet but definitely has a unique sound. I'm guessing the end number of the model (in the Slayer's case, 209) is the size of the gears?

I thought they said they were using 13mm gears (I have reached out to them to confirm), and that it is custom pump setup from Fluid-o-Tech. The gear size was one of the things (as well as mounting and inlet hose) that they worked directly with Fluid-o-Tech to resolve.

The pump in the video looks nearly identical to my own gear pump, and it's not particularly quiet to me. These gear pumps generally emit noise in proportion to how much back pressure there is. That is, pumping against a blind filter (e.g., for backflushing) is always the loudest thing these pumps do. That is where they tend to start sounding like dentist drills. When the motor is running slow and/or there is no flow restriction, the pump is often whisper-quiet.


Carneiro wrote:As far as I know, the 9mm gears should have higher flow but max pressure around 9 bar. I believe it reaches higher pressure, as this 204 model can reach way higher than 12 bar, but the recommended maximum pressure is 12. Maybe they (FOT and Slayer) could find a size between the 4 and 9 model to improve noise and reach the pressure needed.

Like I said, I think they ended up using 13mm gears, but it does look like there is a discrepancy with the model number. I saw the pump run at max speed against the OPV (which was gushing), and the pressure was around 12 bars easily. I'll ask Eric Svendsen to comment on this. Even though the graphs of each pump only display a small pressure range, I am not sure that means that they can't produce pressures outside the range shown in the curves on the product literature.


Carneiro wrote:John, it seems the pump is always full speed, so the low pressure is given by the needle valve.

You're exactly right. The needle valve determines the infusion rate and also the peak pressure that can be reached. If you have a very slow flow rate, often the group will never reach 9 bars, even though the pressure behind the needle valve may be above 9 bars.
Nicholas Lundgaard
Top
← Back •
By accessing this site, you agree to the site's terms of service.