This experiment seems to be giving me more consistent pucks and great looking and tasting espresso...
Rancilio Silvia, Mazzer Mini

Vanboom Preinfusion Technique (VPT)
1. grind, tamp, etc.
2. place a pitcher under the steam wand
3. set the steam valve slightly snug (allowing some water to flow at a very slow rate out of the steam wand)
4. lock in portafilter
5. press the brew switch: listen to the sound the water is making through the machine
6. tighten the steam valve a second or two after you hear the puck fill (yes, you can HEAR it)
7. finish extraction

My thought here is that by leaving the steam valve slightly open some pressure can build in the puck, but the path through the steam wand acts as a relief keeping the pressure in the grouphead low for a few seconds until you tighten the valve and pull the shot. NOTE: I am not opening the steam valve, just cracking it slightly to provide some pressure relief. Does anyone have a schematic of the Silvia plumbing/routing?

That's the only thing that counts. Another informative thread on Silvia preinfusion is here: http://www.coffeegeek.com/forums/espres ... ods/373954
Here is a pic of Silvia's hydraulics: 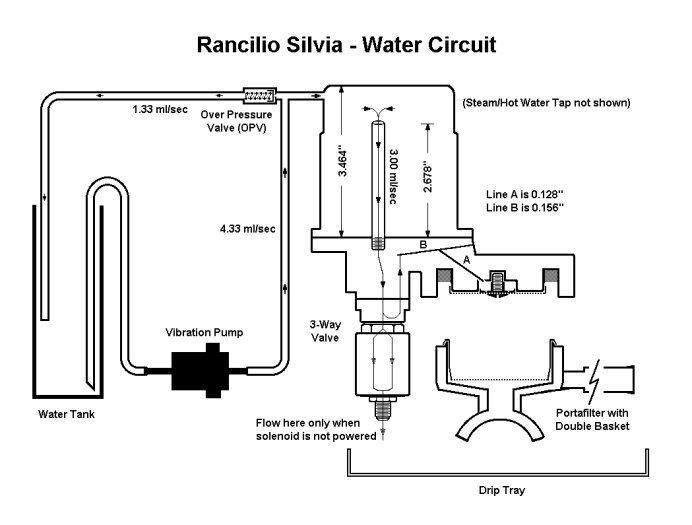 Thanks for the post Eric - the path to the steam wand is not shown, but I believe it comes out of the top of the boiler. The pump builds pressure in the boiler which can be relieved by opening the steam valve. So it is feasible that a reduced pressure flow into the puck at the beginning of extraction would result in "preinfusion".

Volume and consistent dispersion probably matters during the preinfusion process - I think I will run a preinfusion test and see what the puck looks like before extraction.
Don
Top

The exact location/method of Silvia's steam line tap has changed a little since introduction about 10 yrs ago but yes, the steam line is at the top of the boiler.

All manual E-61 machines have a preinfusion chamber POSSIBLY as an effort to duplicate the preinfusion of a spring lever machine. E-61 preinfusion takes place at around 4.2 bar. Certainly there exists many posts on the benefits (or not) of soaking the puck prior to the observation of flow. Ken Fox and Jim Shulman did some exhaustive testing but I don't recall the conclusion. Note that LM even received a patent on their idea - http://www.google.com/patents?id=OT0cAA ... o#PPA13,M1 .
Skål,

The revival of this topic now has me doing some side by side comparisons.

No VPT: More body in the cup and more "grit" on the tongue. Maybe this means that more solids were extracted? Shot time was about 2 seconds shorter than with VPT.

With VPT: Cleaner and clearer tasting, the gritty mouthfeel is gone. Crema has a cleaner, brighter flavor when skimmed and tasted on its own. Shot time was about 2 seconds longer than with VPT.

Obviously I am leaving out a lot of details and this "experiment" is not very systematic. I basically took the same roast, grind, tamp, etc. and pulled 2 double shots and tasted them while making these notes.

Silvia owners, try the VPT and post your results please. It is a manual process and might take some practice, but heck that's life with Silvia!

OT from VPT but this PI mod does work, pls excuse the babelfish you just have to wade through it
http://babelfish.yahoo.com/translate_ur ... l=Translat
Top

Life with VPT on Silvia...
I recently made an OPV adjustment to reduce the brew pressure on the Silvia. I have been getting outstanding results using the VPT for a 3-5s pre-infusion.

Remember the rule of thirds? The first 1/3 of the shot volume is usually darker and more bitter than the middle 1/3. This preinfusion technique controls the extraction by allowing the puck to absorb some liquid, and "brew" a little bit slower initially than without the VPT. The result - less bitterness in the first 1/3!

With some practice, you can nail the VPT by sight with a bottomless portafilter. Control the pressure relief with the steam wand valve until you see the liquid appear at the bottom of the portafilter, then keep the pressure off for 3-5 seconds, then close the steam valve and begin the extraction.

Silvia owners - have you tried this? Please post your results!
Top
← Back
By accessing this site, you agree to the site's terms of service. If you need help with the site, please contact us.