How about some pictures of the internals? I'm very curious how things look and the routing of all the tubing. Also, I'm curious whether the water is preheated before entering the brew boiler.
Curtis
LMWDP #551
Top

Clive Coffee's first look review of the QM67 is up...

seking wrote:I want to amend my previous review after spending more time with the machine.

2. Steaming is not great on this machine. The holes are too big. The 4 hole replacement tip is likely better (its on its way so can't say for sure) because of the smaller diameter of the holes. I think it will use less steam with smaller holes so might get more steam out of it? But those holes are too big to make good microfoam especially with small quantities. My wife confirmed my findings, and she is a microfoam master! I've read similar comments too.
3. Steam boiler is too small. What is the point of a double boiler if you can't brew coffee and steam at the same time? They don't recommend it in manual and in fact they strongly recommend steaming milk first. I know why now after observing. This is a 15 amp machine (will be my last) and as such, can only heat one element at a time. It gives priority to the brewing boiler. Large element heats fast, but still it will heat the brewing boiler first even if you are done with it and want to steam. SO, you need to steam milk first, which is the opposite of what I like to do to avoid separation. Bad design in my book.
Overall, a bit underwhelmed with the machine. I expected more. I'm going to bring it to the guy I bought it from to see if he can make some adjustments or something. My guess is he can't, but I'll keep you posted.

I warned about this months ago when this machine was slated to debut. At that time (before it was called a QM67), it only had a 1,000 watt heating element. Having had a PID'd Alexia I knew this machine would be no different than it in the steaming department, even with the upgraded heating element and the name change to the QM67, becuase it has the same size boiler and heating element (~.75l/1400 watt). For beautiful microfoam you need the super small two hole tip that comes standard on the burn-me wand (think it is the same one as the Isomac mentioned). You'll need an adapter to fit it to a no-burn wand, but it slows down the flow so that you do not outrun the boiler, keeping your steam nice and dry. Otherwise your boiler pressure drops and you end up with big bubbles and wet milk. Face it, you need the small tip and 45 seconds to steam about 6 ounces of milk.

This is a very small DB machine, so you can't reasonaby expect it to perform like its bigger counterparts.

If you are scared it won't work out for you, order it from Chris Coffee. If you don't like it or want to kick it up a notch, return it for a full refund minus the cost of shipping both ways. Yes, you'll lose money, but you won't be stuck with a machine that you don't want. You are probably only looking at $150, which is much less than you'd lose if you decided to sell it to get something else. Heck, return it for a machine he carries that better fits your needs - Duetto, Vivaldi, Rocket, Cimbali Junior, etc. Just a thought...
Merle
Top

The QM67 after we made some changes to the wattage of the heaters, prior to shipping ANY of them, has been nothing short of Very well accepted. When the machine was designed it was to fill a nitch. That nitch was a Dual Boiler machine for under $2,000.00 with an E61 group. When a customer calls me an wants to discuss what machine is best for them, the very first thing I ask is what percentage of the drinks they make are straight espresso verses milk based. I ONLY recommend dual boiler machines to people that make more than 50% straight espresso. It was NEVER engineered to be a machine that could steam milk and pull shots at the same time. It was not designed to ever be a plumbed in machine either. It was also never designed to be a high volume machine. For high volume machines I recommend a plumbed in Duetto II and a 20 amp circuit. When used as it was designed to be used it functions perfectly. As for steaming milk first then pulling a shot, I personally think that is the only way to do it WITH semi commercial machines. I pour my milk into my pitcher, grind my coffee and tamp it, then steam my milk, then pull my shot, while my shot is extracting I have time for any bubbles in the milk to come to the top. I can then tap the pitcher and swirl the milk to give me that nice shinny surface and texture I want. As SOON as the coffee is done I then pour my perfectly worked milk into it. I find that if I do it in the reverse the creme will dissipate on the espresso which makes it more difficult to produce nice latte art. On commercial machines I do both at the same time. Each to his own, however IF one insists to pull their shot first then I would NOT recommend the QM67 it was engineered to function that way. As far as steam tips are concerned we several and in most cases it is not the arrows it's the Indian behind the arrow. I will however agree that some tips have a shorter learning curve than others.

Chris, Are there any changes planned on the next batch of QM's ?

-I recommend placing the porta filter spouts in front of the handle or have them point straight down as the cup opening is hard to see in the current handle set up.
-Eliminating the front panel porta filter flex.
-Brace the OPV copper tube so the OPV does not come out of the socket during shipping.
-Make the double box styrofoam corner padding softer so when it takes a slight hit i does not crack/crumble and cannot be used again for warranty repair shipping etc.

The portafilter spout is adjustable, you can turn it yourself. I put a rag around the spout so as not to scratch it then tighten it up in a vise and use the handle as leverage to turn it which ever way you want. The answer to your question however is no I have no plans to make any changes to the QM67.
Chris Nachtrieb
Pres. Chris' Coffee Service, Inc.
Top

I also agree that the spout direction on the included portafilter not being very easy to use as it faces away from the handle limiting the view of the spouts when brewing, as well as making tamping more difficult if you're like me and used to hanging the spouts off the edge.

Since the spouts are screwed on, theoretically it just needs to be spun around on a vise like Chris describes, however on mine it was not that easy and I needed some extra help from a butane torch to loosen the loctite that held my spouts on.

Here's some pics for everyone's reference... 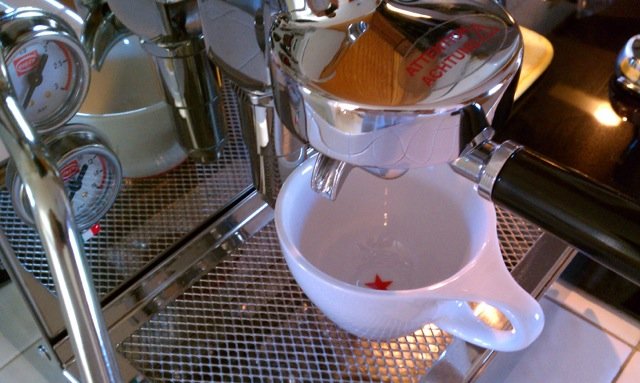 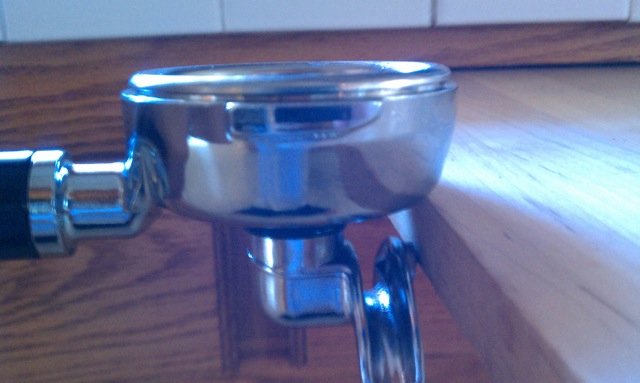 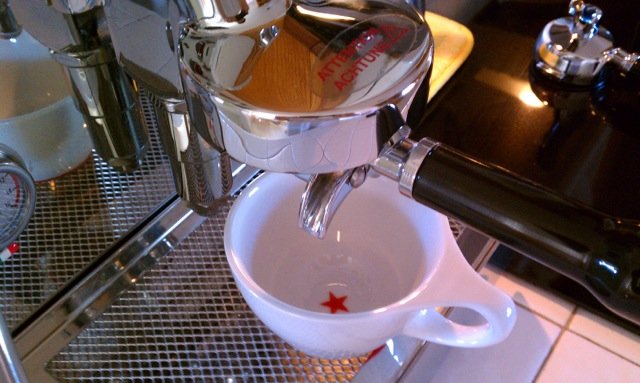 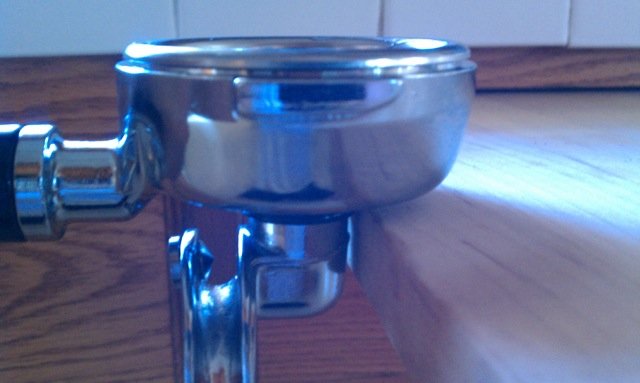 Another problem I had was that the spouts were not tight when I clocked it 180 degrees so I added a #12 rubber o-ring with some food grade lube over the portafilter outlet to take up the slight gap and keep the spouts from moving on their own. 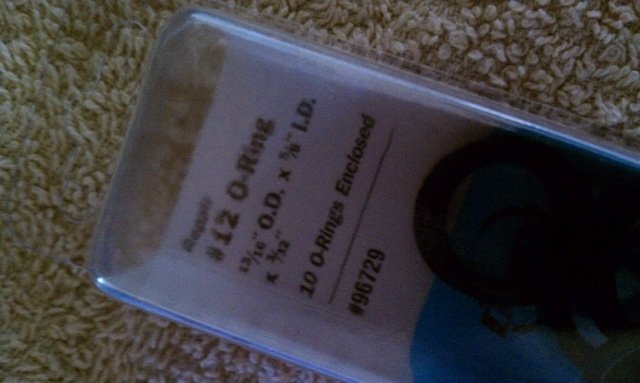 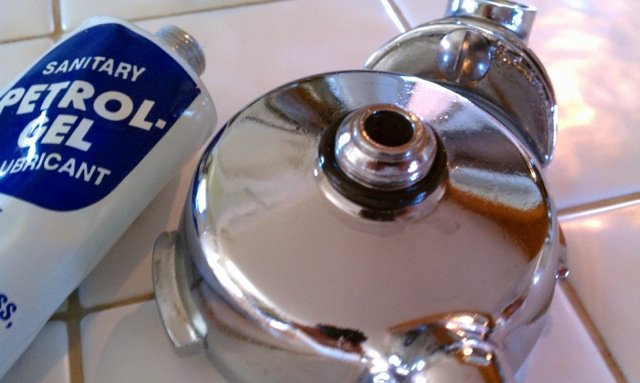 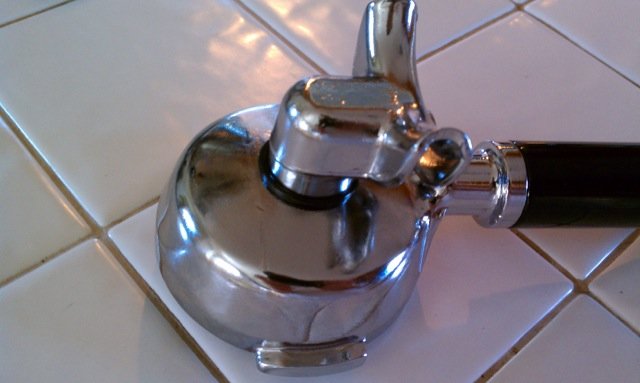 Either way it was a simple fix to adjust everything to my own preferences, and not something that would deter me from purchasing the QM67 if I had to do it again.

For those concerned with the steaming capability of the QM67, I can offer my one month owner's perspective.

Steaming has not been a problem for me at all. I can make micro-foam from 5-10oz of milk in 15-30 seconds without dropping out of the green zone on the steam pressure gauge with the stock two hole tip. The 4 hole tip works similarly for me, it just hits the limit of the steam boiler sooner due to the larger total tip opening area. If I had a preference, I would say I am more consistent with the stock 2 hole tip at this time, but I'm confident I could adjust my technique to work with the 4 hole tip if necessary. There is definitely an adjustment required for the user if upgrading from a single hole tip equipped machine, but I would say if you have trouble keeping up with the quick steaming, you would likely have the same problem using any other higher end machine due to not being accustomed to the additional steaming power. 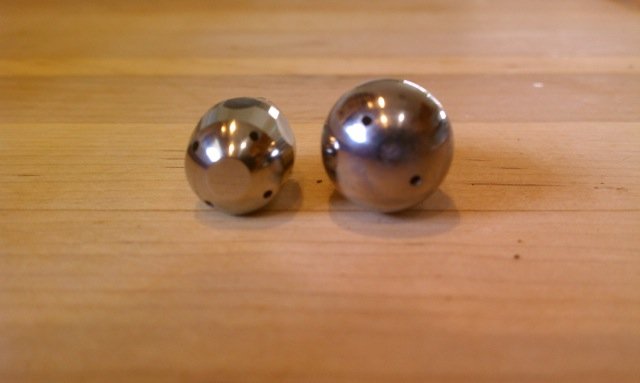 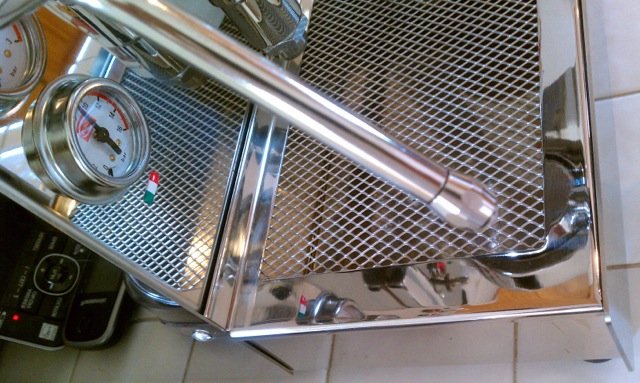 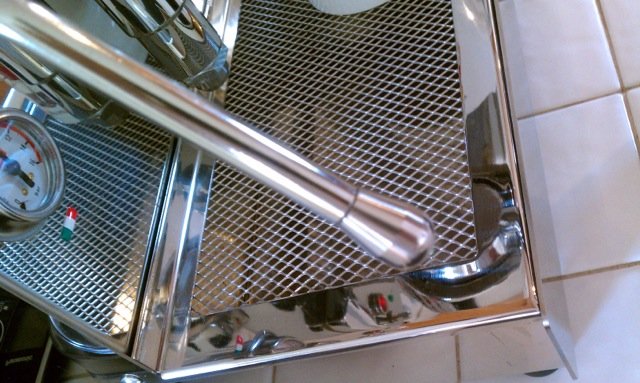 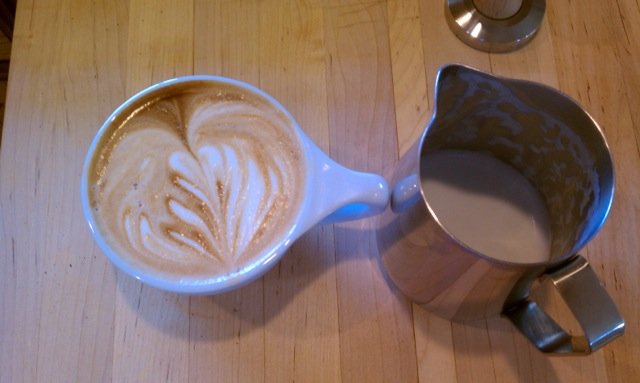 From your pictures of the latest tips it appears both have been changed relative to the ones I had pictured earlier in this thread from my (aging) Andreja and the 4 hole replacement I bought a few years ago. The new 2 hole stock tip has much smaller holes than the old one and should work better. Now I would like to try one

Sorry for creating any confusion...

I will try to remove my prior post w/ the picture of the older tips as it does not apply here.

Very pleased. Significant improvement in shot consistency over my PID'd Silvia, no sink shots yet. I am using the same Vario grinder and rotation of beans (currently Red Bird). I was never much of a milk drink person but my wife has now taken an interest and I am seeing good results steaming milk. I got some additional tips to play with also, haven't tried them yet.

I was really torn between the QM67 and Brewtus. Ultimately I was more comfortable with Quick Mill's build quality and CCS as the vendor. The larger Brewtus steam boiler was appealing but I haven't hit any limitations in my normal routine with the QM67 steam boiler. I do fit in the user profile Chris mentioned earlier, making more straight shots than milk drinks. I'm sure the Brewtus does a does a good job, the QM67 just spoke more to me. I did do some post delivery tweaking but it was minor things. The CCS service folks have been very helpful over email, excellent service.
Top
← Back •
By accessing this site, you agree to the site's terms of service. If you need help with the site, please contact us.