Profitec Pro 700 too hot at group

I am setting up a new DB (Profitec 700) and noticed that the temp at the group head seems much hotter than is reflected on the PID.

While the lever is up the water is coming out in a way very similar to my T1 after it has been sitting idle for while. It shows the telltale signs of flash boiling. The odd thing is even after extensive flushing the sputtering does not stop unlike on the T1. There are large bubbles and irregular streams of water leaving the bottom of the group screen. Adjusting temp settings on the PID do not seem to matter for brew or steam boilers.

I have noticed that on initial heat up the water flow coming from the screen is normal so I suspect that the PID offset maybe off resulting in much hotter water than it should be.

When I received the Pro 700 for review, I used a thermofilter to plot its brew temperature consistency. I noticed the temperatures were occasionally erratic, so I checked the PID settings. The "d" value was way, way off. Below are the recommended settings: 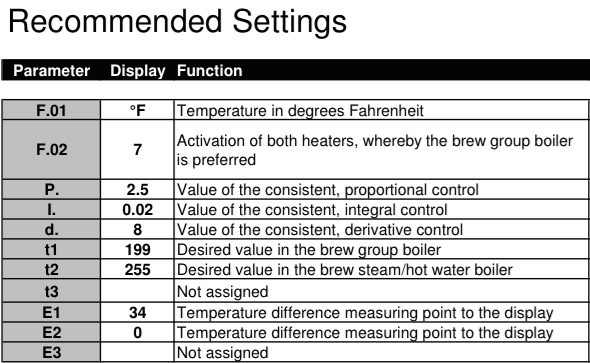 BTW, I found it easier to set the PID to Celsius rather than wonder whether the internal PID settings would follow Fahrenheit or Celsius. Once I reprogrammed it to the recommended settings, the brew temperature performance was excellent (I plan to post them in the research review thread soon). I've uploaded the parts diagram and PID settings instructions for your reference.

This is great information thank you so much. I could tell something was a bit off. Overall so far I have say, its a really nice machine.

Update: Turns out my settings for D and E1 were both way off. Anyone else getting the machine might want to double check the settings and make sure they match to the recommended settings as a starting point.

As Dan pointed out make sure you set the PID is set to Celsius when using these settings. I think there may be some internal conversion if you switch from C to F for the PID settings but I am not 100% certain.

I just read your post on adjusting the PID on the Profitec Pro 700 - very cool that it can be adjusted and not just factory set. I'm seriously looking at buying a Profitec Pro 700 and noticed in the programing information that you supplied that it looks like function F.02 can be set to 5 - "both heaters on =>high wattage" or 7 - "both on, but brew group preferred => saves energy". The Profitec site states that the unit will run on 120 V/ 230 V / 240 V options, but I'm not sure if the NA version only runs on 120 V or the unit will take what ever power it is given. Given that both boilers together will draw 1200w +1400w = 2800w (23.3 amps at 120 V), does the unit run better at 230 V or 240 V - 15-Amp (hence setting 5). I've wired a dedicated outlet for my espresso bar with 12 Ga wire, so it could be for 15A or 20A and it could be 120 V or 240 V, whatever I hook up at the panel. I often entrain crowds at the cottage and in those cases would like to brew and steam at the same time to reduce the time it takes to make lattes and cappuccinos. Can this unit be set up for 240 V and thus heat both boilers at the same time? I understand it will run on 120 V 15 Amp (setting 7) to allow simultaneous brewing and steaming, but it will alternate the power supply between the 2 boilers.

RPerrins wrote:I often entrain crowds at the cottage and in those cases would like to brew and steam at the same time to reduce the time it takes to make lattes and cappuccinos.

If you really need commercial speed, get a commercial unit (e.g., La Marzocco GS/3, La Cimbali Junior, La Spaziale Vivaldi). With a commercial espresso machine, you can start brewing and finish steaming before the extraction ends. Semi-commercial espresso machines like the Pro 700 need around 30 seconds for steaming and around 30 seconds for the group to restabilize, so the minimum drink-to-drink time is around 1 minute. Converting it to 220V won't change the group recovery time because it's gated by the thermosyphon/cooling time of the grouphead.

For what it's worth, I used the Pro 700 at an event serving 20-30 people without problem as reported in Profitec Pro 700 Review. On the other hand, if you have a lot of latte lovers, the Pro 700 will be too slow.
Dan Kehn
Top

Can this unit be set up for 240 V and thus heat both boilers at the same time?

Not without CONSIDERABLE expense, i.e. control board, steam boiler fill solenoid, rotary pump, AND heating elements for both boilers.

And, while I certainly take into consideration Dan's comment re the C vice F settings, at least one other owner has reported "happiness" with the F settings.
Skål,

If there is an increase in overall performance using the 240v power, now that I've looked at the parts list a little closer, I could just get a European 240v, 50hz model and use a Variable Frequency Drive to provide it with the appropriate power. Adding a VFD at the power panel would certainly be cheap and easy. The real question would be; can I easily buy a European model? I may need to think about a special purpose plug and outlet as well.

RPerrins wrote:If there is an increase in overall performance using the 240v power...

As I said before, I don't believe 220V power will increase throughput, because the E61 group needs at least 30 seconds between extractions to restabilize. That lag is a function of the group's thermal dynamics, not the brew boiler temperature recovery time. Moreover, most home baristas cannot prepare drinks faster than 1/minute, so the required restabilization time is a moot point.

If you do decide on a 220V model, keep in mind that it will be nearly unsaleable in the US.
Dan Kehn
Top
← Back •
By accessing this site, you agree to the site's terms of service. If you need help with the site, please contact us.