Some of you know the history of this machine from following my original thread: The Mysterious Profitec Pro 300. For those who are new to this machine here's the quick facts: 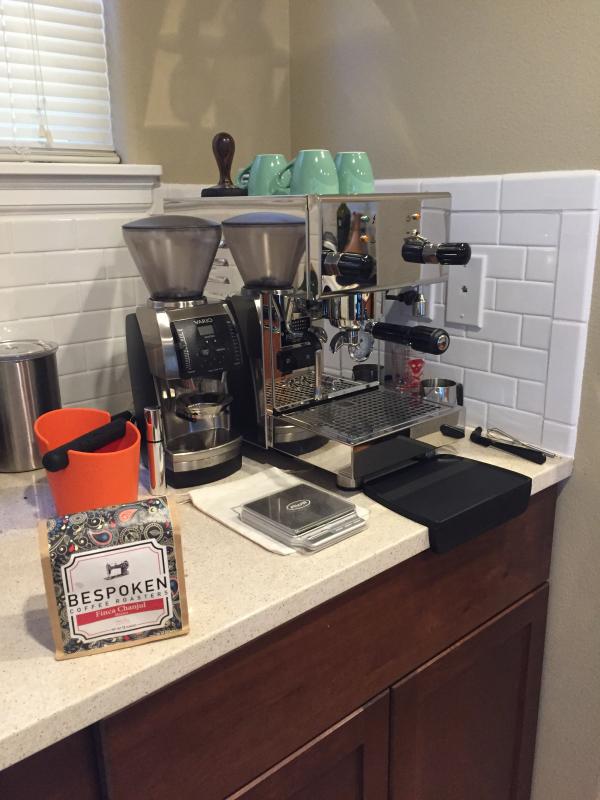 So this is a relatively unique little machine. I was originally pretty sold on the BDB, but I was concerned about longevity, and I wanted something that would hold its value. Here are few points of comparison:
So there's a bit of a give and take, you lose some features, you gain a couple, and you get a machine built by a company with a very high reputation for quality. Those are the differences, there is a much longer list of similarities. I should also mention the Lelit Diana, it's probably an even more similar machine to the Pro 300 than the BDB is, but it wasn't really on my radar, and IMO it's the weakest (and the cheapest) of the three. 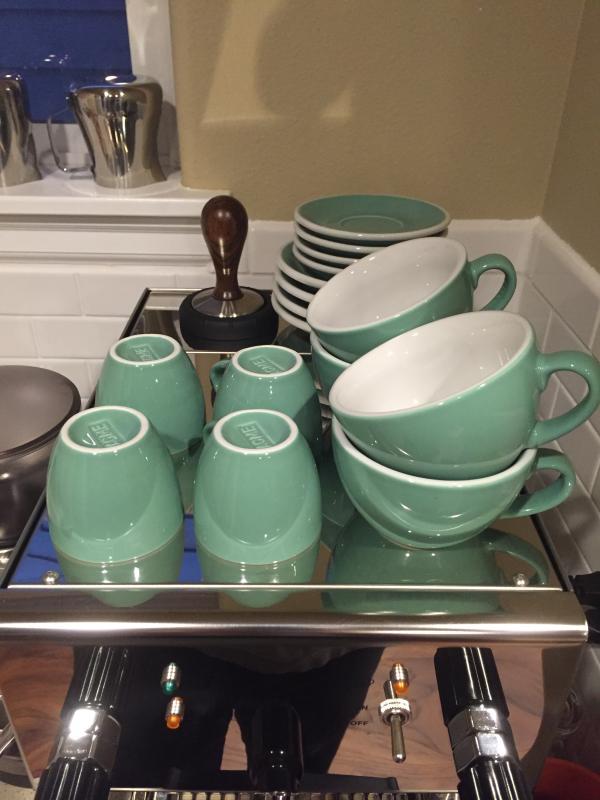 I bought the machine from Clive Coffee as on open box model. As one of Profitec's only two US distributors, they were sent the Pro 300 to test and decide if they wanted to sell - currently they only sell the Pro 700 and their grinder, the T64. So this was that test machine. It's likely that when Clive and WLL finally do start selling the machine, it will be a little different from mine. Mine is still a production machine however, since the Pro 300 has been on the market for almost 2 years in other parts of the world. I have been told by Clive that they will be selling the machine in the near future.

So let me walk you through excerpts of my routine, I think this will highlight a lot of the pros and cons of the machine. There are three switches on the front of the machine, one turns on the machine and starts to heat the brew boiler, next to it is the switch to heat the steam boiler, and up top is the switch to activate the pump. So although I rarely make milk drinks let's say that today my wife wants a London Fog or a Capp.

I turn on the brew boiler, the PID display turns on displaying the software version briefly before switching to the temperature in the brew boiler, there is a little dot flashing on the screen indicating that it is heating. I now quickly activate the pump for 1 second, if I don't do this, then when the water temp gets up to about 75F the machine will make 5-10 pops before quieting down and being fine (presumably a pressure difference somewhere that activating the pump equalizes). Next I switch on the steam boiler, the pressurestat is set to about 2.5bar 1.3bar. The brew boiler reaches temperature in about 2 or 3 mins (I'm serious). The steam boiler reaches pressure in about the same amount of time, however in reality, the condensation in the wand is fooling the machine. Opening the valve will purge the condensation and cause the pressure gauge to drop down to 0 - the heating element will turn back on, and the steam boiler will actually be at temp/pressure in another few minutes. If you purge it a min or two sooner the element will never turn off and it will heat up a little quicker. So five minutes in and the water is up to temp. If you still have the stock 4 hole steam tip, you better be an expert, otherwise I suggest picking up a two hole from Chris Coffee, which makes things a little more manageable. Anyway, the portafilter is heating quickly and will be hot less than 10 mins from start. If you do your part (good coffee, quality grind, even distribution, level tamp, etc.), then you'll be creating excellent espresso in no time. However when everything is right and your shot blonds right at 27 seconds, you'll be surprised to see you're PID displaying a temp ranging from 215-235F. It seems the element turns on while the pump is activated. I don't know how common a feature that is, but truly back to back shots aren't really possible with the Pro 300 - it gets too hot. Either flush some water (it doesn't take much, it's a very small boiler), or insert a cold portafilter which will equalize things pretty quickly.

Other random things and quirks: 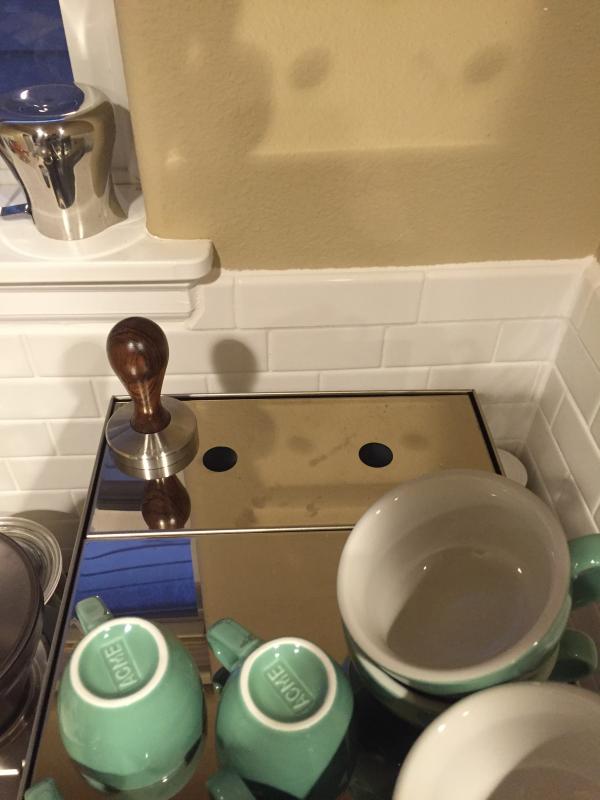 So let's finish this up. Do I regret buying this machine - no absolutely not. Do I occasionally think the BDB might have been the better choice - rarely, and the feeling doesn't last long. The BDB has a lot of things going for it, but I spent a lot of time in Clive trying to make a better shot with the Breville - trying to convince myself that I was giving up in the cup quality in the name of durability and resale value, but I couldn't. At the end of the day at best they were the same, and most of the time the Profitec was better. Of course I'm not a professional and every bean is different, but that was enough to convince me. I didn't need preinfusion. I don't need autostart when it heats up so dang quickly. I wanted a no burn wand. I wanted a well-built machine. I wanted something beautiful. I bought the Pro 300, and I have no doubt that it will serve me well in the foreseeable future.

I'm happy to answer any questions you might have. I plan on shooting a quick video of my routine just so you can see it heat up super fast.

Here is a link to the product page: http://www.profitec-espresso.com/en/pro ... o-300.html
Top

Thanks for the info!

FYI, it sounds like your anti-vac valve is stuck. Your steam boiler shouldn't behave like that - dropping to 0 bar upon purging - upon startup - unless the anti-vac valve is stuck closed and false pressure builds up as a result. (As an aside, some manufacturers' machines are shipped with the anti-vac valve blocked closed with a plastic piece to control residual water during shipping. That piece should have been removed by the retailer, but sometimes is missed.)

Also, the pressurestat setting of 2.5 bar is quite high. 1.0-1.3 bar is the Profitec spec, and typical.
What I'm interested in is my worst espresso being fantastic - James Hoffmann
Top

baldheadracing wrote:FYI, it sounds like your anti-vac valve is stuck. Your steam boiler shouldn't behave like that (needing a purge) upon startup - unless the anti-vac valve is stuck closed and false pressure builds up as a result. (As an aside, some manufacturers' machines are shipped with the anti-vac valve blocked closed with a plastic piece to control residual water during shipping. That piece should have been removed by the retailer, but sometimes is missed.)

Yeah, that sounds like the issue, thanks for the heads up. I'll do some more research, then get it opened up this week and see if I can figure it out.
Top

I corrected myself - you'll still need to purge the condensation - a fair bit of condensation is pretty normal for 'no-burn' wands compared to regular wands. I noticed that you changed your tip - just FYI, when I changed my tip, the new tip didn't have the little rubber o-ring that is on the inside of the tip. (There is also a different o-ring to seal the tip against the tube.) The inner o-ring wraps around the white teflon tube and thus keeps steam from getting in between the white teflon tube and the (usually) chrome-plated brass tube. No inner o-ring just meant much more purging of condensation.
What I'm interested in is my worst espresso being fantastic - James Hoffmann
Top

So the new one did not come with an o-ring, but I was able to slip it off and use the one I already had. As far as I can tell there is no inner o-ring, the white tube appears to be fitted onto something way up in the wand, but on the tip end it's loose.

Also I had the steam pressure wrong. It is right at around 1.3, maybe a little less. Not sure why I typed 3, just misremembered.
Top

Alex, it's great to hear an update on your experience with the Pro 300 and even better to know that buyer's remorse won't be setting in. Thanks for sharing!
Top

Great writeup and thanks for posting your impressions. Looks really nice machine.
I've had my eyes on it for a while and awaiting for the final US version to be available.
How is the steaming and microfoam with the 2-hole tip?

Edit added question-
Can the high brew temp you observed be somewhat tamed with the PID settings? 235 F sounds like the onset of steaming.

Also any concerns with the switches being low close to the drip area? I guess with a spouted portafilter any spills would be minimal.
I am really debating between this and the Quick Mill QM67 (and Vetrano 2B).
Top

Hey there, and welcome to HB!

Steaming with the 2 hole tip is great. I'm quite the newbie still but I poured my wife a beautiful rosetta this morning. I have the help of a Espro Toroid pitcher, I'm not sure how much that is helping, but it seems almost easy. 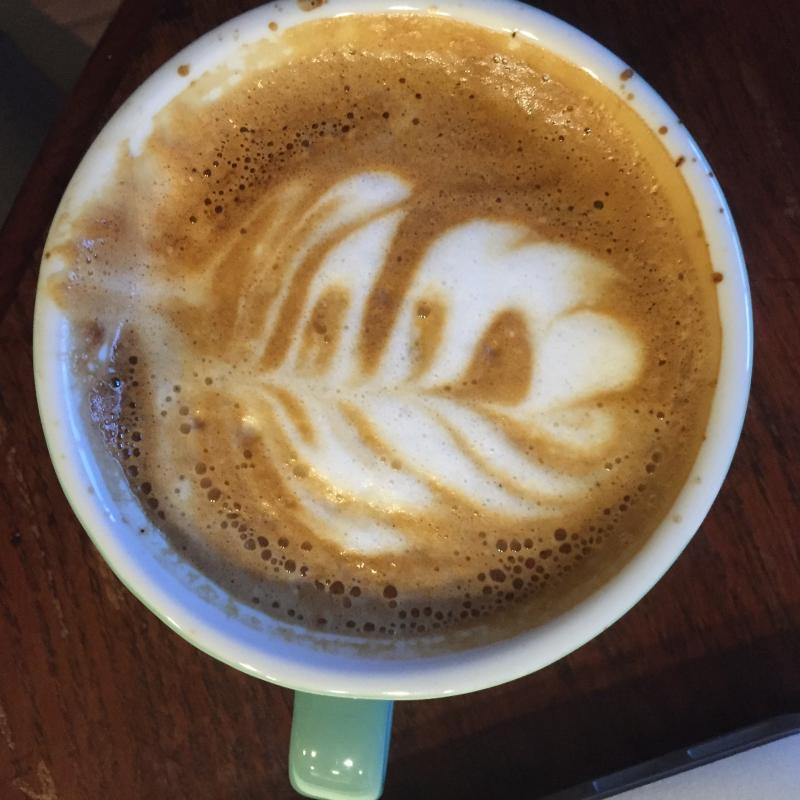 She had already taken a sip, but it's at least descent!

I don't think the PID settings will change the temp much. My PID is set at 203F right now, but by the end of the shot - after the shot timer goes away - it's usually at least at 215. I was told by Clive that this was normal and just part of the design, and my shots have been quite good. If my grind is too coarse then it doesn't happen, it only happens when everything is right, and I can get it back down to 203 in 20 seconds if I wanted to.

No concerns with the switches and I've been using a bottomless exclusively for a while now. Occasionally they get splashed, but they're really beefy. You get a very tactile click when actuating one of them. I was worried about the switches at first, but now I really quite like them. Of course with the spouted portafilter they're will be no chance of splashing.

The QM67 definitely has a reputation as one of the best E61 machines out there, but I would rather have a machine that is IMO just as capable, a little different, significantly cheaper (save more for the grinder!). I'm sure you'll be happy either way. If you end up wanting one, contact Clive (or WLL if you prefer) and see if they can order it for you, they need to know that the demand is out there!

Happy to answer anything else you can think of.
Top

Alex, can you time how long it takes to steam 4 ounces and 8 ounces of milk using the 2 hole tip? What amount of milk were you steaming when you wrote in your first post that the milk was getting to temp in 6-8 seconds?
Top

To answer your second question, I was probably steaming 4-5oz in less than 10 seconds with the 4 hole tip. I never really timed it, it might have been as low as 5 seconds. And that was until it was at temp, I could never get the right texture with the 4 hole. Also that was at about 1.4-1.5 bar in the pressurestat, it's since been lowered a bit.

I'll update you next time I steam some milk. I've never steamed 8oz on it before, I would guess it takes about 12-15 seconds to steam 4-6oz with the lowered pressure and the two hole tip.
Top
← Back •
By accessing this site, you agree to the site's terms of service. If you need help with the site, please contact us.