In the Elektra A3 conclusion I wrote:


Plainly stated, dialing in the temperature and extraction was too darn easy. In retrospect, I realize that I carried an unstated assumption into the evaluation: Fast pressurization means poor preinfusion (wrong!). This bias originates in my experience with vibration pump E61-type machines, which pressurize much slower than a rotary pump's blink-of-an-eye 2-3 seconds.

At the time I didn't elaborate on my assumption that "fast pressurization means poor preinfusion", but thanks to Sean Lennon, I'm able to present some interesting data for your consideration. First a little background...

Yesterday morning the doorbell rang. When I opened the door, there was a large black pelican case with triple seals sitting on my porch, looking decidely serious. It was nice and sunny. I thought, "Hmm-m, what is this?" Sean had e-mailed me the day before telling me to expect a package. He didn't tell me what to expect. Whoa, an espresso machine Mr. Wizard tester kit! I'll leave the specific hardware description to Sean, the important thing is that with this gear, you can create combined pressure and temperature profiles with data points captured easily at 20 per second. That adds another dimension to an analysis, plus the capture rate is a lot better than my own setup plugging along at one data point per second.

Lino stopped by this afternoon to help me answer one question that puzzled me for months: The Elektra A3 appears to ramp up in pressure in seconds, so why isn't it "unforgiving"? Was there something different about its pressure increase? Was there an interval that should be rightly called preinfusion, however brief it might be? We took a stock thermofilter and tee'd in a transducer (translates pressure into an electrical signal). Now we could record the ramp up in pressure. Of course, it's not the same as a real coffee puck since dry coffee would act as a cushion, but it does give us a means of roughly comparing the machines' initial pressure characteristics.

Guess which one is the A3:

Keep in mind that these measurements are taken with a portafilter that's already full, so the ramp up is more rapid than normal (each vertical gridline is one second, each horizontal gridline is 10 PSI). Nonetheless, the A3's profile in the middle stands out as starkly different from the other two - the pressure rockets up in barely one second, which is consistent with the rapid onset of its extraction in actual use.


Physical factors in the grouphead (headspace above and below the dispersion screen, water spray pattern, etc).
-AndyS
VST refractometer/filter basket beta tester, no financial interest in the company
Top

HB wrote:Nonetheless, the A3's profile in the middle stands out as starkly different from the other two - the pressure rockets up in barely one second, which is consistent with the rapid onset of its extraction in actual use.

Were the other 2 machines vibe pumps or rotary? I'm wondering if the differences you're talking about are pump-specific, or something particular to the A3 and the other machines.

They are both vibration pump machines.
Dan Kehn
Top

That is what I thought. I know that with my Bricoletta (rotary pump) I see much faster initial beads than with vibe pump machines - 2 to 3 seconds instead of 5 to 6. Certainly, other factors play a role, but I think the pump is the largest one.
Top

My guess is that first chart is the Brewtus and the third is the Valentina.
Jim Piccinich
www.1st-line.com
1st-line Equipment, LLC
Top

The results for the A3 seem counter-intuitive to me. I would have assumed that the sudden ramp up in pressure would create the dreaded 'water hammer' effect.

When I tested the A3 it was obvious how forgiving it was. My dosing and distribution were a bit less than consistent, yet the results were very good. Similar technique on my Livia 90 with a bottomless portafilter would have warranted the operator wearing safety goggles and a rubber apron at a minimum!

Is the pre-infusion more a factor of the flow rate of the pumps? As I recall the vibe pump starts at maximum flow rate which decreases as the back pressure builds.

1st-line wrote:My guess is that first chart is the Brewtus and the third is the Valentina.

Ding! Ding! Ding! We have a winner! Apparently Jim is paying attention to my current inventory of espresso machines. The giveaway is the third chart showing La Valentina. It doesn't have an expansion chamber and you can see that the pressure increase is slightly steeper as a consequence. By the way, below is a snapshot of the setup for those who may be wondering: 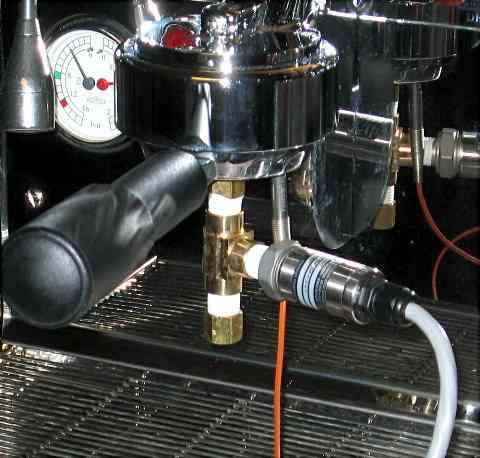 The portafilter has a Scace Thermofilter Temperature Device and the transducer I mentioned earlier. Temperature and pressure are recorded on a laptop. As neat as this rig may be, it's lightweight compared to Sean's own setup. Check out the Brewtus Epilogue page to see seven different variables plotted on the same chart. Needless to say, I asked him to simplify it for my use.

Bob Barraza wrote:Is the pre-infusion more a factor of the flow rate of the pumps? As I recall the vibe pump starts at maximum flow rate which decreases as the back pressure builds.

Your question really goes to why I started this thread: Understanding the forgiveness factor is more complicated than I thought. The pressure ramp up certainly plays a role, as does the grouphead design. In the past I thought the importance of the former outweighed the latter. Now my thinking is that it is in fact reversed, that is, the pressure profile plays second fiddle to factors like Andy pointed out: headspace above and below the dispersion screen, water spray pattern, etc.

As a practical matter, vibration pumps are "slow" to move water compared to a rotary pump, even at no resistance and even slower once there is resistance. Rotary pumps have much much higher flow rates independent of the resistance that you see almost instantaneous pressurization.
Dan Kehn
Top

Just FYI. I've got the necessary quick release parts on the way. If you bring it on Friday, we can "spice it up".


Sean,
What's the temp compensation range of that transducer?

It is not a high dollar unit but I have used this sensor on parallel systems with both mechanical and other transducers and it has never flinched at 110C. If you are seeing issues with the readings, it may have been dropped or spiked in a prior life.


Cheers
sean
Top
← Back •
By accessing this site, you agree to the site's terms of service. If you need help with the site, please contact us.