Need help with equipment usage or want to share your latest discovery?
← Back to Espresso Machines • 46 posts •

Why is the rapid ramp up of pressure problematic (potentially) for the Elektra yet not so with the Marzocco? The GS with PI won't channel if used properly, but the Marzocco is inefficiently jetted and is one of the most sensitive machines to espresso pack density and quantity I have ever encountered. I am tempted to credit the infatuation with tamp style and process with the inherent unforgiving design of the LM head. The jet on my GS is a crimped copper tube--not very exact.

mteahan wrote:Why is the rapid ramp up of pressure problematic (potentially) for the Elektra yet not so with the Marzocco?

That was my original point: I assumed that rapid ramp up of pressure would be problematic based on my experience with E61s. The experiment documented in this thread says to me that quantifying the forgiveness factor isn't as simple as plotting a pressure profile.

I have some limited experience with La Marzocco commercial equipment thanks to Counter Culture Coffee opening their espresso lab to the public every Friday. They twiddled with the gicleur diameter on their machine and I noticed an improvement in the forgiveness factor (though not everyone agrees on this point, as noted in The problem is on the handle side of the portafilter). I think the extended dwell time introduced by a smaller gicluer and Andy's suggested contributors ("Physical factors in the grouphead (headspace above and below the dispersion screen, water spray pattern, etc).") are more important than the pressure profile.
Dan Kehn
Top

Sponsored by Made by Knock - café quality, everywhere

The pressure profile must take into account the jet (gicleur). While this affects the ramp up pressure in the head, it is more a flow issue. Once the backpressure develops in the portafilter, the jet has little effect on applied pressure. Only a PI system can maintain a lower initial PI pressure as the puck begins to saturate with water.

My experience has been that mechanical PI systems are more forgiving, and decreasing the jet size will encourage a PI effect on a Marzocco. Marzoccos have usually been prone to flood the portafilter very quickly, which is the probable cause of inconsistencies with the Marzocco system. Decreasing the size of the jet helps, but since it was never designed to thermo-compensate, fiddling with the jet should be in conjunction with a temperature evaluation over the brewing cycle to make sure nothing changes. If the jet is sufficiently downstream, it won't, but I don't recall where the jet would be on a Marzocco.

What we think we know about brewing espresso is based upon a series of assumptions that go back so far, no one can recall the origins. Much of the work here and with many of the home users is testing the foundations of those assumptions, which is refreshing. Ken's work with his Cimbali Jr. is very cool; and not just because it re-enforces the theories I have held for quite a while.

If we can begin to test without these pre-conceived notions of what is necessary to evaluate a machine, that would be really interesting.

mteahan wrote:If we can begin to test without these pre-conceived notions of what is necessary to evaluate a machine, that would be really interesting.

To what preconceived notions do you refer? Can you be specific?
-AndyS
VST refractometer/filter basket beta tester, no financial interest in the company
Top

mteahan wrote:If the jet is sufficiently downstream, it won't, but I don't recall where the jet would be on a Marzocco.

on the inlet fitting at the neck, although the banjo bolt can be bored and tapped for one, too.
Top

Anyone ever used this one Marzocco group? 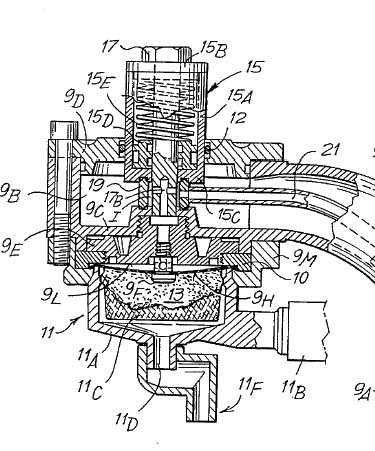 I'm no expert, but that looks a little like a preinfusion chamber...

Maybe it was going to be their answer to the E61 pre infusion style. I wonder if it ever made it off the drawing board
Top

That also sure looks like the hard way to load the PF handle...

It says patented in 1997. I wonder if the PI chamber had an effect on temp stability.
Top
← Back • 46 posts •
Sponsored by Baratza