Plumb In Espresso Machine (How To)?

Can you split the water connection to the fridge and use it for an espresso machine?
Top

Sure, that's what I did. Chris' Coffee sells a Max adaptor for this purpose, though any decent plumbing department should have an equivalent. Converting a pourover espresso machine to direct connect (plumb in) provides the related details.
Dan Kehn
Top

Yes. I did it with my Andrea Premium and now my Duetto. It works just fine. The water line comes into the fridge from the basement and is split off to the espresso machine.
Top

There are two issues here, in fact.

First, one has to deal with the mains water input to the machine. You can certainly use Chris's Max Adapter, and in fact I used one for several years with no problems whatsoever. More recently, I remodeled my kitchen and had the opportunity to redo things completely, with the advantage of having a plumber attend to my needs and desires over several hours (a rare privilege, for which I paid $75/hour). I now have two complete espresso setups, both plumbed in, and we did exactly the same with both of them.

Instead of using a Max adapter, we plumbed each in independently, each with its own water source and each with a shutoff valve specifically for the espresso machine takeoff. I guess we could quibble about how you can pay $3 for a plastic John Guest shutoff valve, which is unlikely to cause problems, but I feel safer having a real stainless steel shutoff directly from the mains that I can turn off, leaving no "uncontrolled" outlet anywhere under the sink. This is the exact same sort of shutoff that people expect to have under the sink for their hot and cold water taps, that I now have for my espresso machine mains water takeoff. I'm sure it cost me a hundred dollars more to have this, but for peace of mind's sake, it is (to me) money well spent.

As above, I had a Max adaptor on my cold water takeoff for several years and never had a problem, and if you have one I'm sure that you are unlikely to experience a problem, either. I now have a flexible stainless steel pipe coming off the shutoff valve, which terminates in a John Guest adapter, which I have plumbed in directly to my espresso machines. This gives me ultimate control of the water input and were I to change machines I would not need to have the plumber come back to assist me. What I want is the ability to turn off the water supply at the source to the espresso machine, in case of problems (or because I am going on vacation) which does not also turn off the water to the sink itself.

Drip tray drainage is a topic that people don't tend to discuss here, but getting good drainage out of your machine is not easy and backups are common, threatening the expensive electronics in your espresso machine. The plumber whose time I had at the end of my kitchen remodel set up a drainage system that works perfectly. It is ventilated and has its own "trap" so that there is no risk of sewer gases coming up through it as long as the trap is filled with water (requires that you run a quart or two through the drip tray every month or two; not hard to do if you are actually using your machine).

Espresso machine plumb ins are something that make the whole home espresso experience more enjoyable, by eliminating a major source of annoyance in dealing with this sort of equipment. If you are renting and want to minimize expenses for a temporary installation, by all means buy a Max adaptor and hook things up by yourself, even if this means putting the tube from the drip tray drainage directly into the sink (something I did for months several years ago). If on the other hand you are in your own home and not planning to move anytime soon, my advice would be to find a competent plumber and invest a hundred or two hundred dollars to get things done right from the start. There are skills that you don't have that any competent plumber does have, and it is "penny wise and pound foolish" to try to economize too much on an installation you are likely to use for a very long time.

Finally, invest in a $10 water alarm from Home Depot or Lowes. If you are in the mood to splurge, buy two of them and position one under the sink and the other next to the espresso machine itself. You will probably never get anything out of this "investment," however if you do it could save you thousands in water damage to your home.

I was contacted by a forum participant who requested pictures of my plumb in setup, which I am now posting below.

Here is the takeoff of the water supply under the sink; it looks like any other takeoff, such as what goes to the cold and hot water taps of the sink above, and like those takeoffs, it has its own dedicated shut off valve: 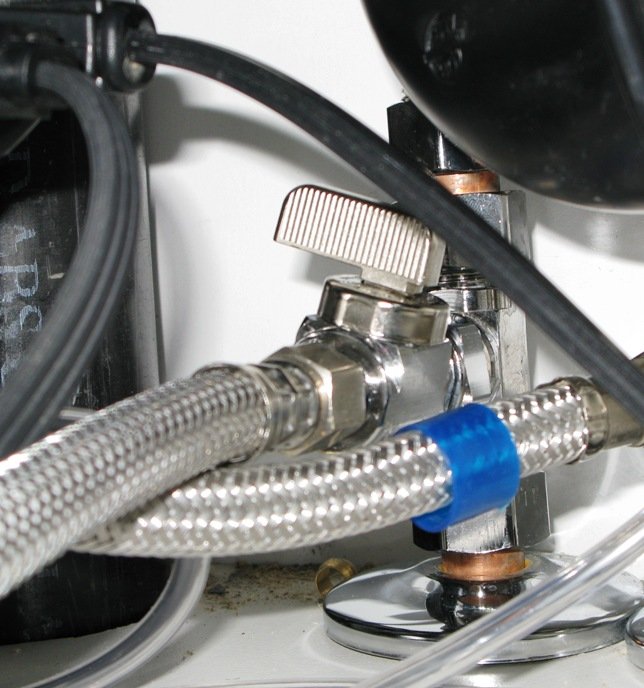 The flexible stainless steel water line terminates in a John Guest fitting which I installed myself: 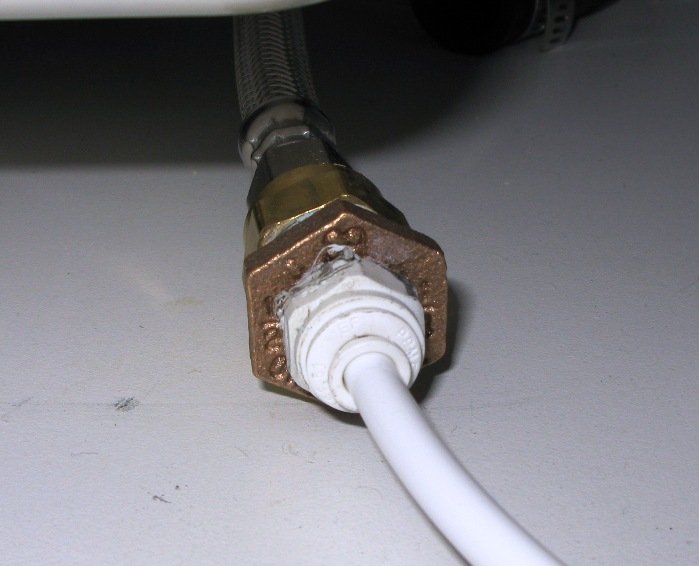 The fittings needed to go from the flexible stainless steel water line to the John Guest female fitting were tricky. Originally I went to a hardware store and what they gave me was incompatible and leaked. The plumber considered it a "no brainer" and knew exactly what he needed to get (which I don't recall anymore, but your plumber if competent should know what to get).

Here is the undersink drainage setup. It is basically just another independent drain placed before the main drain and with its own, open, trap. We tried other arrangements that did not drain well, and previously I had one of those "T" inputs added to the drainage going to the disposer, which also drained poorly most of the time. The plumber who installed this trap called his boss, a plumber with many decades of experience, who suggested this setup. I believe that this setup might not meet code in some areas, but it would be very easy to cap it off later if you sold the house or if you stopped using it for any reason: 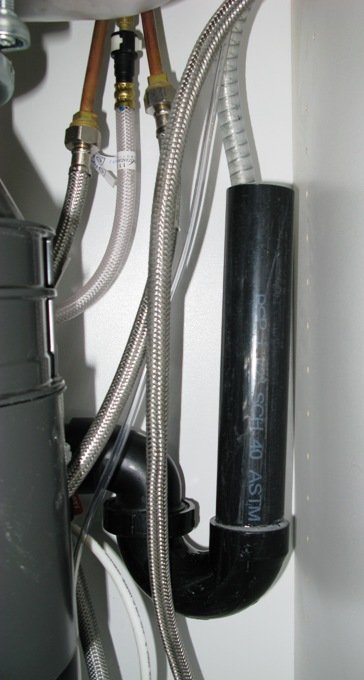 Wow, Thank you very much for the long reply! Having plumbing under yet another cabinet and drilling through the granite are not real options for me. For me it is easier to empty the drip tray rather than refill water because it's easier to get to. For a moment I was thinking about taking some 3/4 PVC and just draining it to the outside of the house but this is just a BAD idea.
Top

out of curiosity will these systems work with flojet or do they need to have higher water pressure?

jim
Top
← Back
By accessing this site, you agree to the site's terms of service. If you need help with the site, please contact us.