As mentioned in this thread, I am enjoying getting an Olympia Maximatic up and running. It will be our office espresso machine. The Livia 90 is out on loan. Beware: lousy dumbphone pic: 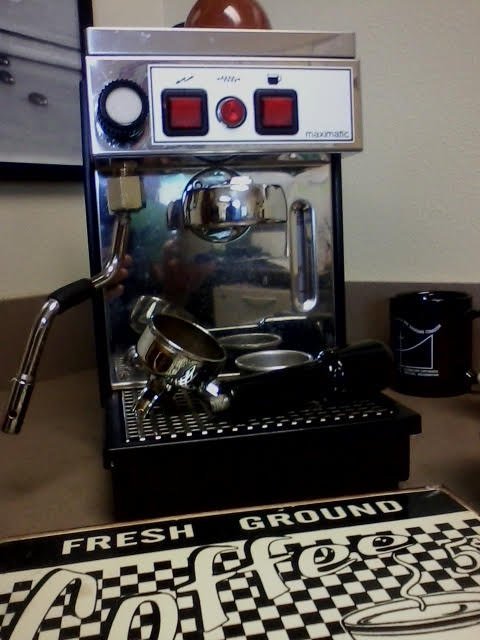 The OEM steam wand has been replaced with adapter and this buggly thing.

And after pulling three shots and having a basket stick up in the group, I see that what I thought was an Olympia portafilter with a 3rd party handle, is probably a pavoni portafilter. The brass component is female thread and the handle is male threaded. I hope the portafilter was modded not the group, because I want to replace it with the Olympia version.


The espresso is delicious, but advice is to scrutinize closely listings of Olympia machines.
LMWDP #198
Top

Note that Olympia baskets don't necessarily mean perfect fit. I have an original Olympia 2-cup basket as well as a newer one purchased from Cerini, which is in theory an official Olympia basket for old and new machines. I'm using them on a newly acquired 1985 Maximatic. My new Olympia basket also sticks in the group fairly easily (more so when empty than full), and makes it a little more fiddly when inserting the portafilter into the group. They don't seem to roll the lip over quite as much on the new baskets as the old ones, so it sticks out a bit more.
Top
← Back
By accessing this site, you agree to the site's terms of service. If you need help with the site, please contact us.