OK so this is really just a way of telling somebody, anybody, that I have a "new" toy - gotta spread the excitement right?!

I present the Olympia Caffarex NT 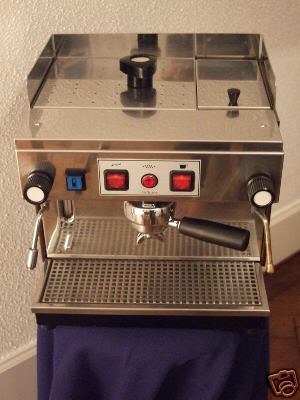 It has taken nearly 2 months to get the thing here and ironically I haven't now got a lot of time to play with it, at least for the next week or so: that said, initial impressions are really good.

For those unfamiliar with the Caffarex it is basically an upsized (old style) Maximatic / Livietta - so, an HX machine with what appears to be the same brew water tank capacity but a significantly larger boiler than it's little brother, and with a couple of additional facilities: a (powerful) hot water tap and the mysterious blue button on the left, which it transpires refills the boiler tank from the reservoir without the need for turning the machine off and waiting for it all to cool down. This last is a really nice little feature which seems to make the machine more suitable for occasional/light commercial use. Not having hands on knowledge of other boiler+tank machines, is this a common feature?

My model is early 90's and has seen what I guess would be light commercial/sunday club use - chrome is worn off the steam arm and there's a little flaky paint inside from what I think is sloppy refilling rather than a leak as it seems to be water tight. Pump is not noisy per se - probably the same as the Maximatic but the box is bigger so the sound is slightly different. Build quality is on a par with the Maximatic - almost but not quite as solid as the Cremina simply because there's more metal and a lid or two to consider. Drip tray is all but identical to the Club so capacious enough for some but not for others.

I can confirm that the portafilters are compatible/exchangable with other Olympias so, until I can get a long play with it I'd say it shares the same shot "stats" as those. Dimensions are close to that of the Club which gives it a footprint similar to current hot lever topic, the Ponte Vecchio Lusso.

StanP has this machine so perhaps he'd like to share some better established opinion of the machine in use.
Stan? Anybody else out there with a caffarex?

Knock wrote:snip.... the mysterious blue button on the left, which it transpires refills the boiler tank from the reservoir without the need for turning the machine off and waiting for it all to cool down. This last is a really nice little feature which seems to make the machine more suitable for occasional/light commercial use. Not having hands on knowledge of other boiler+tank machines, is this a common feature?.

Nice looking box BTW. Interesting that the portafilter cranks so far to the right. Is that normal?
Jeff Sawdy
Top

Thanks for the info - yep I can watch the site glass as it fills, a strangely compelling novelty that I hope wears off soonish for the appearance of sanity. I like the fact that it's a manually operated fill as it would seem there's less to go wrong over time - automatic sensors etc.

The portafilter cranks round about the same distance as that of the cremina, club and maximatic, depending on which generation of portafilter I'm using. Most things from Olympia seem to have a design reasoning behind them (total forward projection of the machine maybe), but it may be as much to do with a hangover from the companies domestic machine development from levers to including pump machines - the portfilter handle on the levers pretty much needs to go to one side to allow free passage for the lever arm. So many of the parts on different Olympias are interchangable that it may be a cost saving/stock efficiency exercise - for example even the Superclub seems to have the same grouphead as this and the maximatic, though it's difficult to tell if its exactly the same size.

I do like Olympia's utilitarian looks but sometimes I'm tempted by the flash and vivacity of the E61 styles. Maybe next time...

Thanks Richard - sad to say that this is one reason I probably can't afford one of your beautiful naked pf's this time round but it is another reason to get one so keep the faith!

A happy Halloween to the you and your Cafferex-- Nice indeed- I am glad you jumped on it! We look forward to more under the hood when you get time.. Booooooo!

I have a somewhat homelier (and older) Caffarex that I haven't yet brought back to life. It heats up fine, but the sight glass may need replacing, and there's definitely some asbestos flake from the boiler. I'm considering how much effort (and money) I want to put into the machine, so I look forward to hearing your impressions as you get some time to play with it. You certainly don't see very many of these on the market (maybe they're all over at Rudy's waiting for gaskets).
Top

Hi Greg - thanks and whhooohooooo to you too: just been out trick or treating (with my little-uns!) for the first time in my life so I hope you're scared.

Mach - the asbestos doesn't sound so good but there are posts here about getting it off so maybe that's an option. Sightglasses and gaskets - check out the Olympia website and see if it is the same as the Maximatic, if so then chat to Bob Craige over on the lever forum. As the Olympias share so many parts you may find Greg's trick with Pavoni gaskets works. DON'T GIVE UP!

Come on guys: get those old Zabars specials out of the loft.

Mach- I would just give up and mail your Caffarex to: MOGOGEAR

Kidding- I would be happy too point you towards any thing that might help you repair the beast!

Sneaky -Take that mask off right now- and stop dissolving those chocolates into your espresso! !

The wife won't be pleased with you at all!
greg moore

the caffarex is a fine light duty machine with very good steam power. the small 12 inch cube size makes this ideal for a kitchen counter. i have replaced one of the connecting tubes with superflex silicone tubing which has worked as a reliable substitute. the attached picture shows the zabars red trim and the matching moca grinder and an inside view. 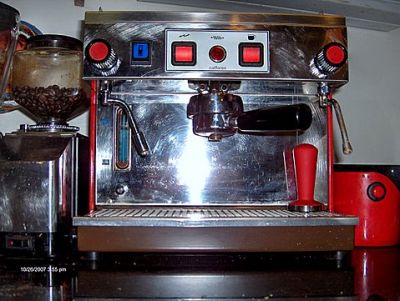 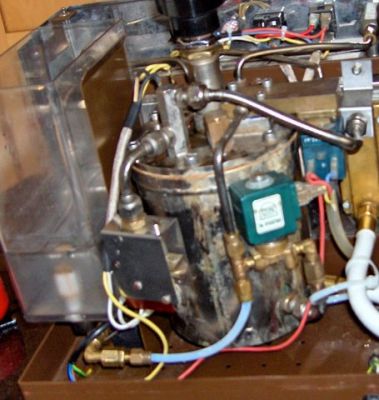 Man, after too much time rebuilding Cremina's- I feel overwhelmed when I see the insides of your Caffarex..! Olympia has a "nice old fashioned" way of routing pipes and etc. I remember from a Livietta that I had that it was hard for me to determine water circuits. Oly likes to "hard pipe " a little more than most companies it seems. So I have to admit I just got bit by the un-lever bug - again-as I try to complete my Olympia set- I jumped on a 1990 Maximatic this afternoon. I may go for the tri-fecta and magically turn my Bezzera into an Olympia Club..

I have to admit I feel vulnerable after only dealing with a power switch, Pstat and element and no back flushing or water dancing for the last two years...the potential for little things to go wrong will keep me tethered to Will at Home Espresso Repair..and a new learning curve on these little HX er's..

It will be good to get out and swap forums more often..
greg moore

Leverwright
LMWDP #067
Top
← Back •
By accessing this site, you agree to the site's terms of service. If you need help with the site, please contact us.