Leaving a Prosumer HX Espresso Machine On CAN SAVE ENERGY

EDIT : Topic changed from CAN SAVE ENERGY.
This post was based on faulty data. The test was rerun and the results are thus: 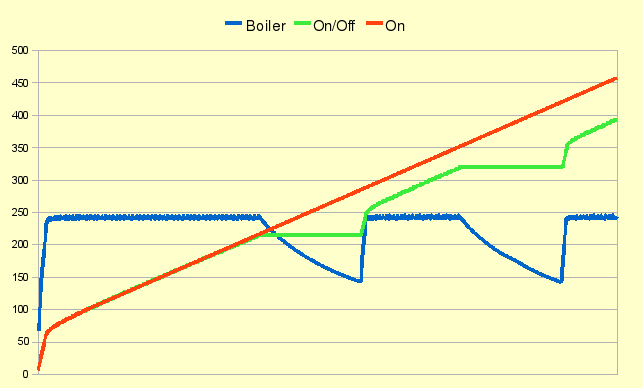 pride geoth before a fall

It's been opined by an old kid on the block that leaving a Prosumer HX Espresso Machine ON does not save energy compared to turning it off for short intervals. See Should an HX espresso machine be turned on/off


another_jim wrote:This is flat out wrong, a violation of the 1st law of thermodynamics.
...
So if leaving it on all the time uses less energy than turning it off, the box would be storing energy that came from nowhere. I know E61 machines are pretty amazing, but they don't do perpetual motion.

A heated environment requires heat in proportion to how much hotter it is than its environment on average. If it is off some of the time, it is cooler on average than if it is on all the time, therefore it needs less heat and uses less energy, startups included.

For your entertainment and elucidation, we present Home Barista's Prosumer HX Energy Analysis as applies to a Vibiemme Domobar Super HX with temperature control via pStat set at 1.1bar.
NOTE : Your mileage may vary.

EDIT : Images plotted on invalid data and removed by OP

As even a Chicago Democrat can see, by the end of the day more energy is input turning the machine off for a couple of hours than if left to idle.

Which brings up the obvious 'but the machine won't cool that much.' OK, to what level can the machine cool for a zero sum game?

The heat loss needs to be less than 1.7% or 25% of the typical loss. Just for grins, the dotted green line shows the cooling of an insulated boiler.

Originally stated was there's not much saving turning off for less than 5 hours, so here's the energy graph with a 5 hour off interval.

cafeIKE wrote:BTW, this measured data. Not pie in the sky economic theory. YMMV

Then I have to wonder about the measurements. You can't save energy while radiating heat. I'd believe the output of say a Kill-a-watt meter.

I have yet another analysis.

At least regarding energy consumption and its cost, turning my espresso machine (an LM GS/3) on and off would have a trivial impact on my annual budget. So, for the same reason that I don't shower with a friend, or don't limit myself to 2 minute showers, I don't turn my machine on and off.

I think it would be interesting to have Ian's analysis confirmed by logging actual energy consumption information, in a number of locations on a number of different machines. This would put to rest, one way or the other, this frequently recurring discussion. Regardless of the information gathered, I would doubt that very many people would find the energy savings or cost of changing their behavior, to be large enough to motivate them to change what they are already doing.

A kill-a-watt meter is a great investment, and will easily pay for it self in energy savings many times over if you spend a couple hours walking around the house plugging different appliances in and seeing how much power they draw when on, and when idle.

I was shocked to see how much power things like my computer speakers or TV consumed when left idle, so those things get plugged in to the switched plugs on the power strips now. The TiVo wasn't so bad, so it gets to stay on (as designed). We usually only have espresso in the AM, so the machine gets turned off when we're not using it. The biggest surprise was how much energy it takes to make a piece of toast, but it's still worth it.

Armed with a kill-a-watt and your electric bill it's easy to make decesions about what's worth leaving on, and switching off.
Top

mhoy wrote:Then I have to wonder about the measurements. You can't save energy while radiating heat. I'd believe the output of say a Kill-a-watt meter.

When the off interval idle cost exceeds then startup cost, it's cheaper to be off.
Ian's Coffee Stuff
http://www.ieLogical.com/coffee
Top

Several years back, I calculated that it would take about 2.5 years to recoup the 'investment' as a saving at LA DWP rates.
A little uncommon sense is cheaper.

Just a reminder—if you have cold winters, your huge espresso machine saves you a modicum of money on your home heating costs in those months. It's probably pretty minimal, but that all depends on your home's size, your heater's efficiency, etc. If you have hot summers and a crappy old air conditioner, leaving your espresso machine on all the time adds yet another source of heat for your air conditioner to counteract. This leads to increased HVAC costs in hot months. This is a potentially significant factor that you need to consider if you want to to actually understand where that "downtime" point is between saving money and spending more on your energy bill. As Ian says, YMMV, and I don't see what these graphs bring to the table that wasn't already obvious.
Nicholas Lundgaard
Top

cafeIKE wrote:Several years back, I calculated that it would take about 2.5 years to recoup the 'investment' as a saving at LA DWP rates.
A little uncommon sense is cheaper.

I actually estimated that it would take about 2 years to recoup the cost in saved electricity, but that was before I had measured how much electricity was being wasted. Looking back now it was costing me at least $1/month each to keep the TV and speakers idle when not using them, so just those two changes have paid back the investment. Plus I still have the kill-a-watt to use (if I had an HX machine it would be plugged in right now) or loan out. More importantly I tested how much electricity the AC used to keep the house cool during the summer, and found that it wasn't nearly as bad as I had estimated, so I let myself turn up the cooling a little, and I'm sure the comfort was worth the cost.
Top

Intuitively, it makes sense that it could require more energy to ramp the heat up and down by huge swings, versus keeping it constant.

Similar to how a PID Silvia is more efficient than a stock Silvia. Or how highway mileage uses less gas than start-and-stop mileage.
Ryan
Top
← Back •
By accessing this site, you agree to the site's terms of service. If you need help with the site, please contact us.