I took the plunge and bought the Ito board from "software and circuits" in EU. The kit was shipped to a EU country and I had a family member bring it to the US. I installed it on Saturday and pulled my first shots, amazing.

The installation was fairly straight forward, small adjustments to the pressure sensor installation as the adapter needed to be filed to fit.

I went ahead and used the factory profiles and played with my machine for a day. I'll post some installation pictures later along with profiles of shots I pulled. For now I'm very happy with the mod, $200 for the pressure profiling feature, not bad.
Top

Very cool! Do you have a link?

Here are some installation pictures showing the pressure sensor installation. I used the T connector in case I wanted to expand later with a physical gauge. 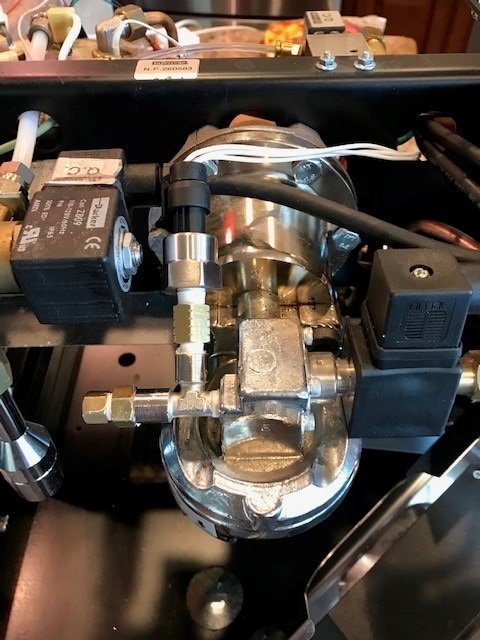 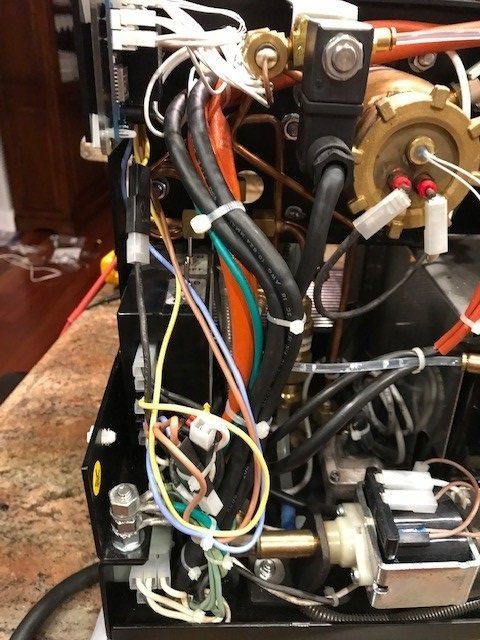 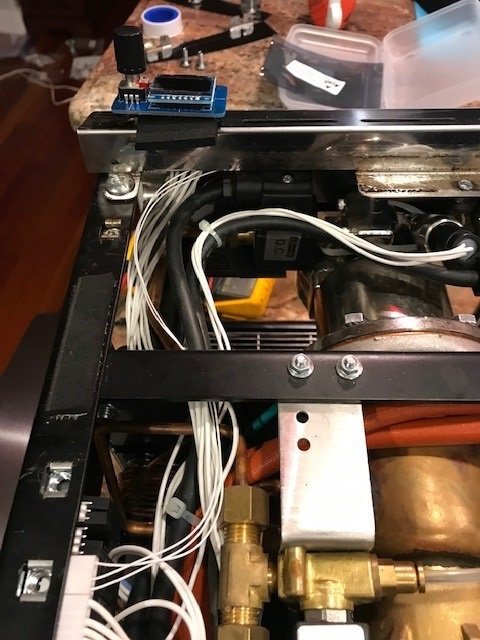 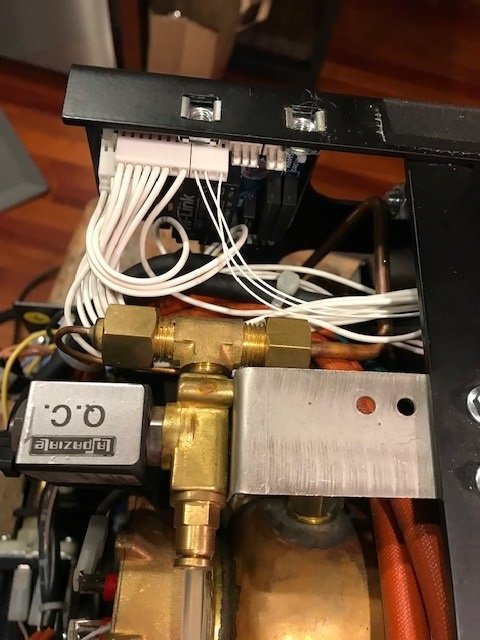 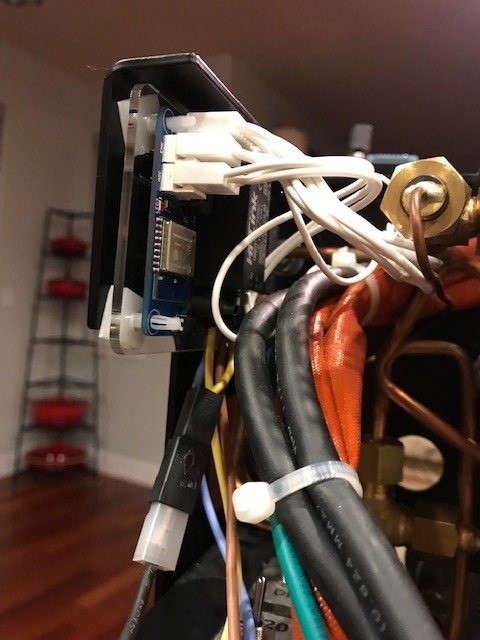 I don't have pressure profiling pictures with me know, but I will most likely post them tonight.

I'm still struggling with how to integrate the screen and rotary encoder (seen in the 3rd picture) in the physics of the machine as I don't want to cut a hole on the face of the machine. I saw on a german blog how someone else did it, but I'm not that handy in cutting sheet. I'm thinking of designing a 3D housing, but I'm clueless when it comes to that.
See link to board and info
http://www.softwareandcircuits.com/divi ... index.html
Top

I also installed the flow meter purchased from them. As promised 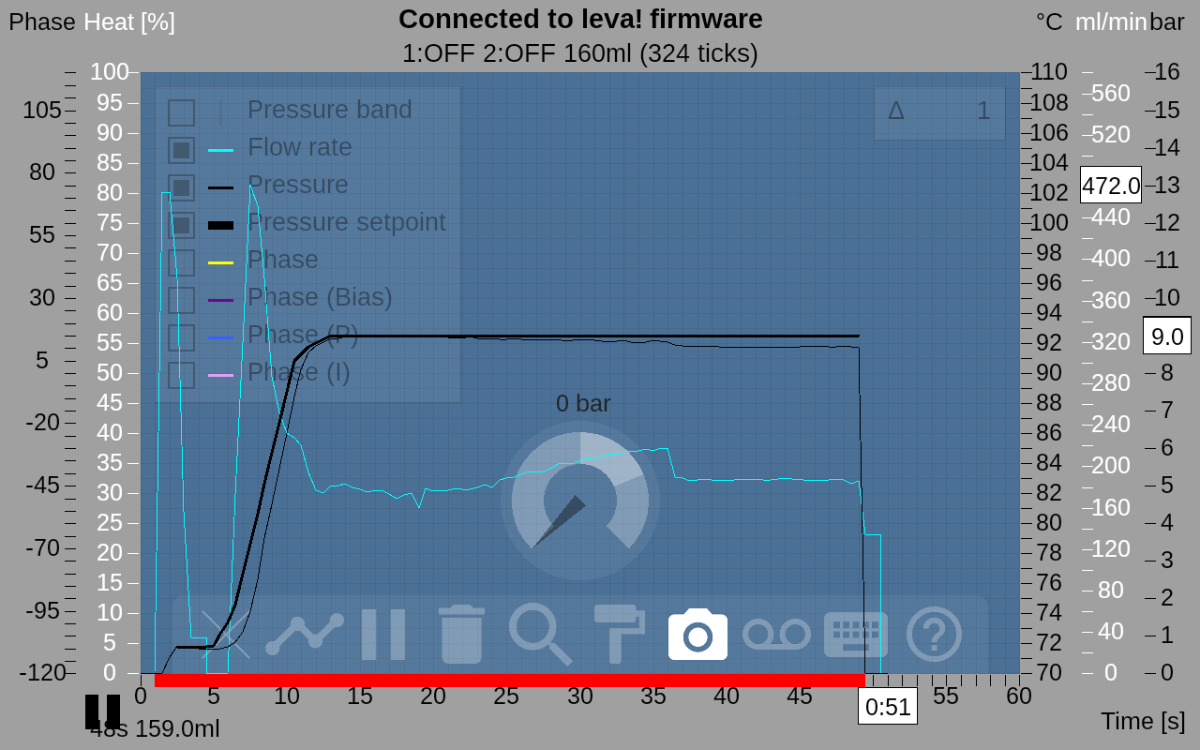 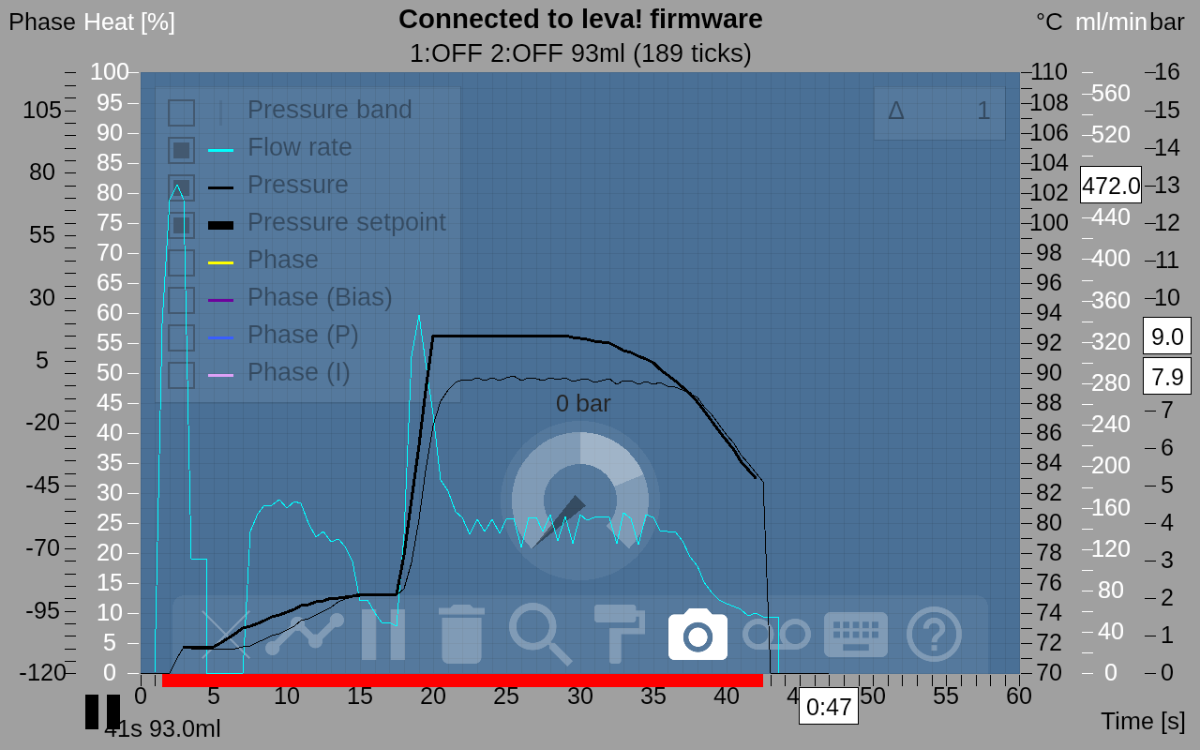 Thanks for sharing. This is very interesting.

I'm also curious to know how the controller can control pressure with the vibe pump. This is the first example of pressure profiling I've seen using a vibe pump.
Top

The flow meter was installed right before the vibe pump.


Beewee wrote:I'm also curious to know how the controller can control pressure with the vibe pump. This is the first example of pressure profiling I've seen using a vibe pump.

I'm not 100% sure. Sandc could provide some color around it. He discusses it a little in the "Alternative to PID" chat. He wasn't sure if it was working for the US 60 hz, as they only tested with 220v and 50hz, but with the Leva! 1.6 version the software works great.
Top

Pressure/flow profiling works via vibe pump since 2016 or so. You find pressure profiling in decent espresso using vibe pumps.

Are you sure you are allowed to install the pressure sensor running with hot water? I think i did read something about this in the operation manual, check it.

Did you install the pid as well? or you got the kit w/o pid function.

My kit comes in March and comes in full, all functions.
Top

I followed the instructions on the following blog, someone already installed the pressure sensor on a similar machine.
https://www.kaffee-netz.de
I bought the entire kit, but I don't use the PID function as it currently interferes with the control board.
Top

I'm looking for suggestions on wire shields as I want to clean up the wiring this weekend. Suggestions?
Top

Regular control loop with feedback: Pressure sensor measures pressure, controller adjusts pump power, nearly stepless via phase angle control circuit (pump sounds more or less normal with this type of control). How exactly it is adjusted must be configured by the user, like a PID controller for temperature must be configured by the user. Details in the leva! manual at projectcaffe.bplaced.net/beta.html

Have you already gone through the pressure profiling setup tutorial in the leva! manual? I'm asking because a screenshot in #4 shows that 7.9bar were achieved while 9bar were programmed. That is not normal. The error should be a fraction of a bar, like here: http://www.vimeo.com/301475180. Since the yellow plot of the pump power was not turned on, I can not tell if that happened because the grind was so mismatched that even full power couldn't get the pressure to 9bar (one has to grind finer after introducing preinfusion) or if the pressure profiling needs tuning. Factory defaults will not work, except by luck.

> sure you are allowed to install the pressure sensor running with hot water?

Rated for 125°C. What has to be avoided is vibrations. Installation directly at the pump would be a no-go, even if it would be much cooler.

> discusses it a little in the "Alternative to PID" chat.

That was here: Alternative for PID

> Pressure/flow profiling works via vibe pump since 2016 or so

The leva! firmware is not a new development. It is a relabeled caffe! firmware. caffè! has been around for ages. First released for faustino 1 modules, produced ca. April 2009.

> over-pressure ... valve ... sends water back ... If the flow rate is measured before the bypass valve, then it could be biased high

Ideally, an over pressure valve would be set to a pressure that won't interfere with pressure profiling but still provide the safety function. For example, it could be set to open slightly above 9 bar if the preferred maximum brew pressure is 9bar. At such a setting, it would not cause flow meter measurement errors.

But even then, a flow meter between tank and pump (measuring water) can not give meaningful values if one is interested in the flow rate of the coffee - because it will measure a lot of water that will never exit the machine as coffee:
- Water that fills tubes and air pockets (in boiler and filter)
- Water that gets soaked up by the coffee.
Such flow meters have limited use for dosing, let alone flow control. They have other uses, for example improved temperature control by instantaneous flow-driven reaction a.k.a. "feed forward control".
Top
← Back •
By accessing this site, you agree to the site's terms of service. If you need help with the site, please contact us.