Just replaced the vacuum breaker, for the second time, on an early model, SN 093_2, GS/3, (used the original style breakers; too bad I hadn't read the H-B breaker thread beforehand), but this time I might have been too late.
The hissing went on for a couple of days, then the autofill started running continuously and the steam boiler gauge needle buried itself at the high end.
After the breaker replacement, the GFI, at the wall, kept tripping, when I turned on the machine. I lifted the machine up, from the right side, and water streamed out around the hole where the power cord enters the bottom of the machine.
From what I read, in the H-B vacuum breaker thread, it sounds like I fried the logic board, and that an attempt, at a DIY logic board replacement, is a bad idea.
Will this GS/3 need to be shipped back to LM, for the logic board repair, or is there a better route to take?
LMWDP #017
Kill all my demons and my angels might die too. T. Williams
Top

HB member jpboyt has successfully repaired many "more standard" GICAR circuit boards. Contacting him via PM or here http://www.yelp.com/biz/boyt-enterprises-wilkeson might well be worthwhile.

In addition, should this not work out, there's certainly some LM dealers in San Francisco fully capable of the repair.
Skål,

I wouldn't recommend removing/replacing the logic board yourself unless you have experience working with solid-state electronics. If you do have such experience, it's not terribly difficult to get the board out of the machine and/or install a new one. Getting the brain box open is a little tricky because you have to disconnect the AC leads to the back-panel switch to get it all the way open. Before disconnecting the ribbon cables that come from the front panel, you should mark them so they can be re-plugged into the correct sockets. When reinstalling the brain box, you have to be careful not to disconnect the ribbon cables.

Sometimes you can restore the logic board by gently drying it with a hair dryer and putting it in a plastic bag with raw rice overnight. If that doesn't work, you can try flushing the board with 90% isopropyl alcohol and putting it through the same drying routine.

The continuous steam boiler autofill, which causes the gauge to hit the top of the scale until the OPV pops, is typical of the logic board failures I've seen. I think what's going on is that mineral content in the water is changing the capacitance between the solder pads where the leads from the level probe attach (the level-sensing circuit works by detecting a change in capacitance.) If you can locate that area on the board, you might be able to clean the area between the pads with a soft toothbrush and isopropyl alcohol. That said, the contaminated area might be the pads where the CPU pins are soldered.

If these treatments don't work, you're probably out of luck. AFAIK, LM won't make the complete logic board schematic available to third parties. Even if they did, there are a lot of surface-mount components on the board, and some may not be commonly-available. If the CPU is fried, you probably can't replace it with an off-the-shelf unit because there's probably a custom boot loader burned into it at the factory. And even if you can get a replacement CPU from LM (doubtful), you might have to download the most recent firmware. I have the equipment for that, but I've never tried it (and don't want to!)

The replacement logic board isn't cheap: last I heard, it's $500.

What really intrigues me about your story is the loose nuts. I had a similar catastrophic leak in my GS/3 that caused a logic board failure. I, too, thought the old-style vacuum breaker valve had been spewing steam and/or water into the machine, but it was really coming from the steam boiler seals underneath the triangular plates on both sides of the machine. This only happened when the machine cooled completely, so probably the seals were contracting and allowing water to escape. I'm certain that the leak existed from day one because I had odd symptoms when the machine was first installed, and later when firing up the machine after it had been off for several days after a vacation (continuous autofill, wierd characters on the display, etc.) But since I kept the machine on 24x7 to avoid the vacuum breaker problems, and rarely went on vacation for long periods, the leak remained hidden for years. I finally figured it out when the leak got a little more vigorous and a bunch of water found its way to the logic board.

At first I thought the leak might be due to loose nuts on the triangular plates. They moved slightly when I tried to tighten them, but that didn't stop the leaks. After discussion with LMUSA and my dealer, Chris Coffee, I replaced the steam boiler seals. It wasn't particularly difficult (I have photos that I'll post one of these days.) That fixed the leak. I inspect the inside of my machine often, and haven't seen any sign of leakage from the seals in the 2 1/2 years since I replaced them.

What I'm wondering, though, is whether the nuts on the plates were loose to begin with, and that this caused the seals to deform, and after several years of such deformation, tightening the nuts couldn't restore them to proper operation.

In addition, it's conceivable that thermal expansion/contraction could loosen the nuts over time. I think your idea of putting lock nuts against the nuts on the triangular plates is really good.
Top

Maybe give Great Infusions a call. Besides working on retail customer machines, he takes care of just about every coffee house in the greater Santa Cruz area.
Top

Peppersass wrote:If these treatments don't work, you're probably out of luck. AFAIK, LM won't make the complete logic board schematic available to third parties. Even if they did, there are a lot of surface-mount components on the board, and some may not be commonly-available.

Quite often the part that fails on many circuit boards is nothing more then a $.50 capacitor. It's the part that takes out the $200 Giemme controllers, causes the older BMW instrument clusters to go haywire & will leave your flat screen tv black. These are easily replaced & can be sourced from the on line electronic parts houses but with minimum shipping the part may run you $7-$10. Still, much better then the alternative.
LMWDP 267
Top

Dick, John: Thanks for the feedback and tips. I can be heavy handed with things like hair dryers, so I just opened-up the brain box and propped it up, upside down. A week's worth of airing out should give me a better idea of what kind of shape the electronics are in.
I've got just enough solid-state electronic experience, to give the logic board replacement a try, and screw it up. So, if things aren't working, in a few days, I plan to take the machine to Coffee Biz in S.F.
As for the boiler leaks, tightening those loose nuts, on the triangular plates and tightening the probe fitting, stopped the leaks, but replacing the seals seems like a good, long term solution.
The boiler nuts were so loose, about hand tight, that I believe they were never tightened properly. It is a mystery to me, as to why LM thought to put locking nuts on the front boiler plate, and not put them on the rear plates. I'd attribute it to a factory oversight. 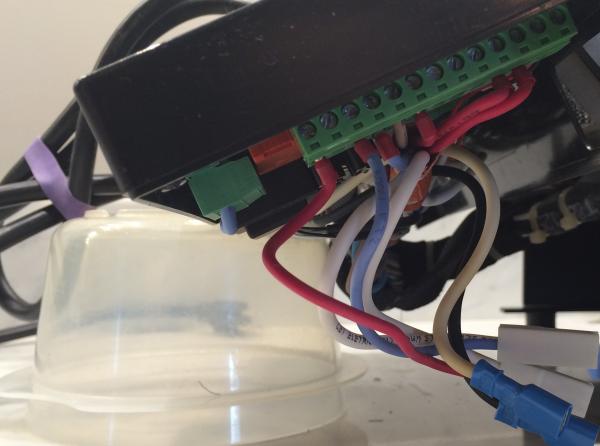 LMWDP #017
Kill all my demons and my angels might die too. T. Williams
Top

For all the above reasons (and probably more), I think it is best to leave the GS/3 on 24/7.
Marshall
Los Angeles
Top

Interesting thread. I have repaired numerous boards that have gotten water soaked. Damage ranges from charred fiberglass to conductive deposits. Funny thing about fiberglass is that once it has been burnt the resin becomes conductive. Yep, didn't believe it until I repaired a Rancilio board twice and only after cutting a slot under the pump relay between the lugs to the contacts did the continuous running pump issue go away. Removing evidence of charring now has become a first step in salvaging a board. And for those that are interested, the autofill circuit does not work on capacitance but rather a low current square wave signal. If you are curious measure the probe wire with a multimeter set on AC. The meter will give you a confused value. You might get a reading with it set on Frequency. Oscilloscope is a better tool if you own one.
When the water hits the probe it effectively grounds the signal. Common technique in logic circuits, known as "pulling a signal low." Grounding the signal removes it from the input to the micro-controller and effectively puts that input at a logic "low."
One other area of thought pertains to gasket compression. There isn't a single person that I know that leaves their car running 24/7 to prevent gasket leaks. Just about everything that has any kind of heat cycle needs to have the fasteners tightened after firing it up a time or two. Thermostat housings and radiator hoses are the two things that come to mind. The hardest items to keep sealed up have the manifold or conduit made of a material that has a greater thermal coefficient of expansion than the fastener. As heat is applied the manifold expands more than the fastener and in the process the gasket is crushed. If the gasket has the ability to be compressed and return to a thickness that maintains some tension on the fastener, all is well. If not, then manifold is now loose and leaks on fire up. Hence the need for re-torqueing the fasteners. The automotive industry has spent much money and energy to get around the need to retighten this type of joint. And I would venture that every dealer that sells a car has the service department or someone look for any problem before handing you the keys.
Just not worth wasting the energy, which ultimately is the trade off when leaving a machine on all the time.
My opinions... Worth exactly what you paid for them... Unless you happen to agree.

jpboyt wrote:And for those that are interested, the autofill circuit does not work on capacitance but rather a low current square wave signal. If you are curious measure the probe wire with a multimeter set on AC. The meter will give you a confused value. You might get a reading with it set on Frequency. Oscilloscope is a better tool if you own one.
When the water hits the probe it effectively grounds the signal. Common technique in logic circuits, known as "pulling a signal low." Grounding the signal removes it from the input to the micro-controller and effectively puts that input at a logic "low."

My comment about the probe circuit using capacitance was based on this post by Bill Crossland, designer of the GS/3. If you search on "capacitance" and "BillC", you'll find another post describing the GB/5 autofill proble circuit, which also uses capacitance.
Top

This is getting into electronics circuit design . . . of which I know zilch. However, I did find this using the search function "water level sensing via capacitance": https://www.google.com/search?sourceid= ... ........0.

I do remember (from 45 years ago) that the resistance of an AC circuit is equal to the square root of the sum of the R squared + L squared + C squared where R is in ohms, L (inductance) in henry's, and C (capacitance) in farads.
Skål,

Eric S.
http://users.rcn.com/erics/
E-mail: erics at rcn dot com
Top
← Back •
By accessing this site, you agree to the site's terms of service. If you need help with the site, please contact us.