Hi Last Friday I took delivery of a new GS3 that I have had on order since the beginning of January. So you can imagine the state of caffeination over the weekend. The quality of the coffee is superb and I'm loving the quality of the microfoam. I still need plenty of practice as it is quite powerful. They supplied a three hole tip. I'm looking forward to playing around with the temperature. Is the Scace device a good purchase for this as I'd love to see consistency of temperature and what happens after a couple of hours of machine idle. The programming appears to be quite straight forward and I like the fact that they have made the boiler temperatures easily accessible via a quick key.

Like Klaus reported on Coffeed.com back in Sept last year I am also disappointed with the build quality. The water tank has sensors at the back which are used to send the message to the machine when water is low and the tank needs refilling. If the water tank is not fitted in correctly the message to refill tank comes up and the machine shuts down. The water tank is held in place by the drip tray in front of the tank. I was very disappointed to see that it appears the integrity of the machine has been compromised in the attempt to hold the drip tray. There are two lugs on the bottom of the drip tray that are designed to sit into the holes drilled at the front of the frame of the machine. 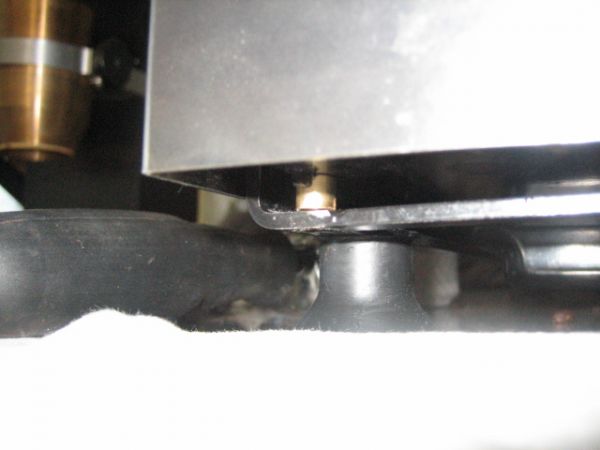 As you can see they are sitting over the holes, not in them, as the front bar that I think has been added since Teme's machine was produced has significant upward curvature and acts like a bit of a spring under the drip tray. 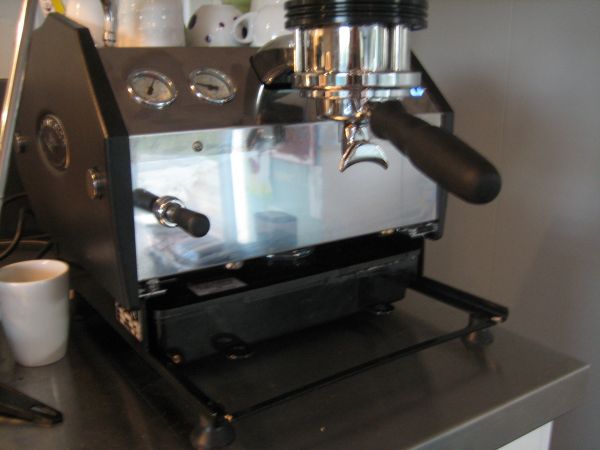 The holes for the lugs have also been expanded rather crudely in an attempt to get the lugs to fit in leaving the front bar connected by very little metal and it looks as though over time with the tray going in & out it will ultimately break leaving nothing to hold the water tank in place. 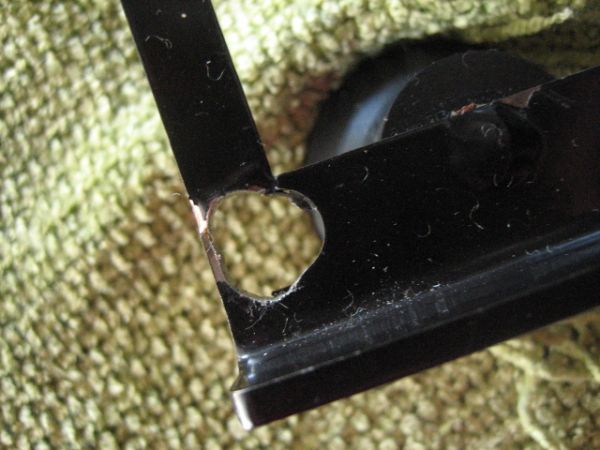 I have a technician from the Australian distributor Allpress coming on Friday to have a look -the first day that worked for both of us. I am surprised though that it was shipped in this state. Is there anyone else who has seen one of the recently released machines who would be able to say if this is specific to my machine or is it how they are all being shipped. I sent the photos to La Marzocco yesterday so hopefully I will hear something from them soon but they haven't yet responded to an email I sent last Friday. If anyone is going up to Tokyo and has a chance to look at the GS3 there I would love to see if it is the same.

Wow! Excellent acquisition! its a shame to hear about the build quality issues however..
how difficult was it to get a GS3 in Australia? Does Allpress have a stock now? I live in New zealand, and am curious about the GS3 and if they are shipped to NZ (seeing as Allpress sells them in Aussie)
"Join Me, i will teach you the dark side of the force"
Top

Hi I have no idea sorry if they have stock or if they are only to order at the moment. I have had this one on order since the beginning of the year. I'm sure Allpress NZ could give you an update.
Rosemary
Top

Wow, that is ridiculous! I could not imagine LM just routing open a frame hole and leaving it that jagged and unpainted. Raw steel under a drip tray equals rust. That small thread of steel remaining on the left will not last long along with the small welded piece in the top right, is the other side that way? When those let go (and they will let go after some use) you will have a broken frame. I am sure that was disappointing but glad the shots are good.

I am thinking I made the right choice when I opted for the Elektra A3 instead of the GS3.
Dave Stephens
Top

That is very disappointing for such an expensive and highly anticipated machine. I'd be upset if I saw that kind of build quality on a $500 machine, much less a $4,500 one. I hope LM makes it right and replaces the defective parts. It will be interesting to see whether the other GS3's have similar problems.
Lock and load!
Top

Rosemary wrote:There are two lugs on the bottom of the drip tray that are designed to sit into the holes drilled at the front of the frame of the machine.

As you can see they are sitting over the holes, not in them, as the front bar that I think has been added since Teme's machine was produced has significant upward curvature and acts like a bit of a spring under the drip tray.

You should have the lugs in the holes, otherwise the drip tray is not in place properly and you may get the "refill tank" error even if you have sufficient water in the reservoir. I visited the La Marzocco factory last week and discussed the tweaks they have made to the machine since the first production models (e.g. mine): So clearly La Marzocco is addressing any issues there have been (the steam tip, the cracking grouphead cap and the reservoir design are the only issues I have encountered and all of these have been addressed).

Pity about the holes for the drip tray lugs on your machine. Mine are not nearly as bad, but I agree that the finish on those could be better.

Regardless of the long list of improvements, for the price of this machine (or any) that sort of build quality is unacceptable. If my first machine (a $380 Silvia) had come that way I would have returned it. it looks like a middle school student took a die grinder to it for practice. I hope that they say something like it was a test model or shop machine that shouldn't have been shipped, or such. For what those machines cost (more then the used Volvo I currently drive cost me!) I would expect more, and particularly from LM. I wonder what other shortcuts they took in designing or constructing the machine? Sad indeed.
Espresso! My Espresso!
http://www.EspressoMyEspresso.com
Top

I think the US market wait list members can be thankful that they have to wait as all these things get worked out.
Jeff Sawdy
Top

Hi Many thanks for all your replies. The plot thickens as from your description Teme, my machine appears to be the latest model, I have the front bar, white buttons, the serial number (0065) is on the bottom left side etc but I have the old black tank. I queried this with Greg at Allpress (Sydney) and he said he knew nothing about any plans by La Marzocco to change the tank.

I totally agree Teme the lugs should be in the holes but due to the curvature upward of the front bar the tray is lifted out and will not stay sitting in them. The machine has turned itself off a few times due to this.

I was hoping La Marzocco may have got back to me overnight so I will try ringing again. I have sent them several photos of my machine. I sent an email last Friday to info@lamarzocco.com to enquire what should be in the box as I received no baskets with it (they have since sent me a blind, single and double) and I enquired about the black tank as it looked identical to Teme's. The tank also had multiple scratch marks on it. As I received no reply I phoned La Marzocco Tuesday and was advised to email Ettore. I wrote to Ettore on Tuesday and sent photos Wednesday. Can anyone advise who I should contact there when I phone again today?

I am very upset about all this. AUD$6700 is a lot of money. I think the machine needs to be replaced but there is a lot of silence from La Marzocco.

Rosemary wrote:I have the old black tank. I queried this with Greg at Allpress (Sydney) and he said he knew nothing about any plans by La Marzocco to change the tank.

The new reservoirs have just come in and I did not get the new version either, yet. However, according to La Marzocco all GS3 owners who have the old reservoir will get the new one through their supplier in due course. This shouldn't be long now if I understood things correctly. Perhaps you could have another chat with Greg (also with regards to the fit of the drip tray and the lug holes - also see below).


Rosemary wrote:I totally agree Teme the lugs should be in the holes but due to the curvature upward of the front bar the tray is lifted out and will not stay sitting in them. The machine has turned itself off a few times due to this.

At first I had to push the drip tray in place quite firmly - it was a very tight fit and I had to use some force (more than I thought would be necessary). After a few refills things got better and the tray started slotting into place nicely. The new reservoir should also alleviate the unnecessary turning off (I've heard others experiencing this problem although I have not - at least not to date).


Rosemary wrote:Can anyone advise who I should contact there when I phone again today?

You should note that you are unlikely to reach anyone between 12 noon and 2 pm CET. Also, the factory closes for vacation on August 3rd if I remember correctly (at least up until August 20th - again if I recall correctly). In my experience the people at LM are extremely nice, accommodating and responsive. I will send you a pm separately.

http://www.ristretto.fi/foorumi
Top
← Back •
By accessing this site, you agree to the site's terms of service.