This is my first post here and I hope to get some help understanding what's wrong with my isomac.

I'll make long story as short as I can...
My machine gave up working a couple of years ago. It was not warming up anymore. So, after long time I decided to have it fixed and I brought it in to a repair shop. They replaced the defective heating element among other things little things. They tuned it up as well and after more than two months and a a few phone calls finally, really finally, they told me the machine was ready to go.
Great! I brought it back home, powered on, all appeared to be working fine at first, but it wasn't! After about half hour the needle in the gauge slowly goes to zero. I powered the machine off. After it cooled down I powered it on again, and after a while, again the pressure gauge goes from normal to zero.
Now, I am really reluctant to bring it in again because I don't want to wait another two months or more.
Is there anyone willing to tell me why the pressure gauge goes down after it has been in on position for a while?I did a couple of shots and it worked fine, I thought.

You should have three lights on the front of the machine, two green and one red. When you first power the machine on from cold the main green power light comes on and should stay on. The other green and red lights indicate the action of the pstat and thus the heating element being on/off.

Where in New York are you located?
Skål,

Hello, thanks for the reply.

At first, when the machine is powered on the three light work as I think they should: red steady on, on the left side, and a red on the right side until starts alternating with the green light underneath. But after about half hour of operation, only the red light on the left side tays on and neither of the two light on the right side lights up.
Also, I notice that after that moment the machine stays quiet.

I can't believe that I waited two 2 1/2 months for the repair. I drove all the way to Bronx from the uperwest side.

I had your light configuration reversed as I was going by my machine which is not an Isomac. Anyway, the machine is losing power because, for whatever reason, it believes the water reservoir is at a low level. Is your water reservoir configured as per the illustrations in this link? http://www.1st-line.com/machines/home_m ... lenium.htm

If I remember correctly, Isomac's have a simple switch which reacts to the weight of the water in the reservoir. The platform which the reservoir sits on can become slightly dislodged during machine movement - like traveling in a trunk from here to there.
Skål,

Mine is a millenium first generation. It shuts off went the water tank is low.
I it possible that the heating element that he installed is not the proper one? Or are they all standard? He said it's a 1400w one.

If I turn it off, and then on in a few minutes, the lights go on again. But it won't last. In a matter of a few minutes the two light on the right side stop working and the is no activity in the machine that I can hear/see. No steam, no hot water.

1400 watts is, as far as I know, the correct wattage. This would not be the cause of your problem - see my edit above.
Skål,

I checked the tank and it fine to me.
Top

Here is how I would "check the tank" :

With the machine off and unplugged, remove the tank from the machine. Now depress the platform on which the tank sits and you should feel a smooth motion and hear a clicking of the switch which is activated/de-activated as you depress/release the platform.

With the tank empty of water, place it back in the machine. Now plug the machine in and turn it on. Only one light should come on - the main power light. Now, carefully fill the tank with water and you should hear a "click" of the switch and the machine should begin to heat up. If the heating fails again (as it has done in the past) after X minutes, you need to either return the machine to the first repair facility or find a new one. I would suggest these guys as they are a major dealer of Isomac machines: http://www.1st-line.com/
Skål,

so if the MAIN power light stays on then for sure is not the microswitch under the reservoir
you problem sound as simple as a false pressure build up
but I'm not leaning in that direction
or the relay sticking in the brainbox or the one external
sound more likely
Stefano Cremonesi
Stefano's Espresso Care
Repairs & sales from Oregon.
Top

Thanks for the reality check Stefano. You would think I could have looked at my own electrical diagram. This MAY represent your machine: 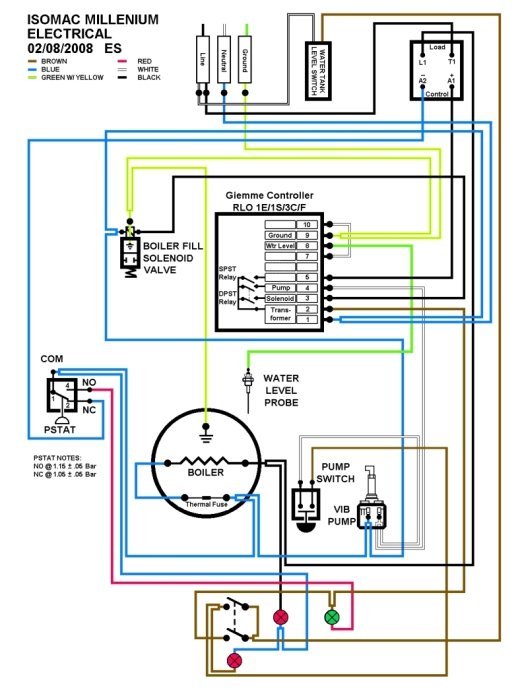 Eric S.
http://users.rcn.com/erics/
E-mail: erics at rcn dot com
Top
← Back •
By accessing this site, you agree to the site's terms of service. If you need help with the site, please contact us.