2xlp wrote:ah, i didn't know it was that low already (that you could barely swirl milk)

BTW i am thinking of doing a de-scale at least in the HX before i put in this new restrictor. its time to do one anyway. and it seems like if there is particles in there it would be best to dislodge them now.

then later when i take it apart i wont have chunk of lime floating around?

what do you guys think?

a nice snowing day should be a good one to de-scale then install this bad boy.

ok i got the correct size wrenches finally.

the fittings are very tight. i am afraid i will break something. im not sure what part of the machine i can leverage against to hold it down. i do have 2 wrenches so im not hopefully pushing against a fitting. the machine is still kind of warm it may be that making it tighter.

just tryin to be careful i have probably put 80% mojo on it so far.

also there are fittings for the steam tube and the fill probe on boiler end. i dont want to slip the wrench and break those either.

if it cools off completely and still tight any suggestions?

The wrench you should be using is what's called a tube wrench or flare nut wrench. This grips the hex so much better than a simple open end wrench.

I don't believe there is much that you can break. The fitting on the boiler should be the easiest so tackle that last. Put the wrench on the "nut" (grouphead) and hit the other end with the heel of your palm - like an impact shot. For the boiler end, you can apply a counter-torque to the top of the fitting with a simple crescent wrench.

All of these fittings you are "messing with" loosen by applying a counterclockwise torque. If all else fails, take it to the plumbing shop you spoke of earlier and they would have it loose in a heartbeat.

erics wrote:And the correct size is ?????

was thinking of maybe a poll or a raffle? hehehe.

i can tell you that it is a lot bigger than it looks and all the guesses so far.


erics wrote:The wrench you should be using is what's called a tube wrench or flare nut wrench. This grips the hex so much better than a simple open end wrench. 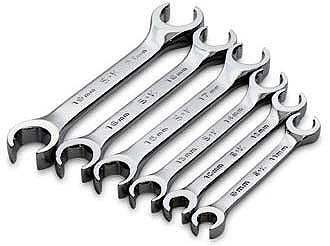 ouch $20..will my regular open end wrench not work? expobar tech said use a "spanner". i guess at least i know what size it is.


erics wrote:All of these fittings you are "messing with" loosen by applying a counterclockwise torque. If all else fails, take it to the plumbing shop you spoke of earlier and they would have it loose in a heartbeat.

Yes, your attached picture is the proper style, if not size. Perhaps a couple of drops of penetrating oil and let it sit for an hour.

here is the verdict....just an update pics to come.

the fittings sizes are.

i used the normal wrenches and went for it. no problems. a bit scary but easy.

no restrictor in there. 3/4" diameter hole.

restrictor makes it about 1/16" diameter hole.

should make a big difference.

machine is still heating... will give final temp result and pics later.

i know you are all wondering what happened.

first i want to thank everyone who helped me on this.

second i want to say that i did not change anything but add the restrictor to the top tube of the thermosyphon.


at 1.1 bar in the boiler and NO RESTRICTOR the group idle temp - 217° - 220° F
° long flushes (more than 8oz to get down to temp, if idle more than 10 minutes after initial one hour minimum warmup)
° temp seemed less stable


at 1.1 bar in the boiler WITH RESTRICTOR the group idle temp - 209° - 212° F
° shorter flush to get to temp (about 4oz, if idle more than 20 minutes after initial one hour minimum warmup)
° the temp seems more stable
° the dynamic changed a bit on when to stop the flush and how long i can/should wait before the brew, still learning.

so far after about 4 shots things seem cooler pun intended but also easier to reach lower temps. and more stable at the lower temp. its stays cooler longer before it heats up.

still have to flush the HX.

the water dance is almost gone. not much dancin anymore. but my dance stops at about 204° due to my altitude.

in the cup?
i think the more stable temps make a better tasting cup. but you all knew that, its fun to experience it first hand. before the disc install the temp would creep up during the brew now it still creeps but way slower, until that last few seconds of the brew. the shot is not only better tasting but i can taste new flavors in the cup. this is a coffee i have used 2 lbs a week of for about one year straight. it is easy for me to tell the changes in the cup because im so used to the bean after so many pounds of it. mmmm this made a tasty cup, tastier.

i think something made the shots feel better in my mouth. strange ? they seem to coat everything in my mouth with a buttery slippery silky lovely texture. like the crema is finer or something. hard to describe just that part of the experience changed for the better.

thanks for the pics and descriptions.

When was your unit manufactured? Mine has a sticker with a manufacturing date. Just curious.

Thanks,
Jeremy
Top
← Back •

Sponsored by Versalab
By accessing this site, you agree to the site's terms of service. If you need help with the site, please contact us.