In search of Moriondo's espresso machine

Finding a needle in a haystack (part 1/3)
by Sebastien L. Delprat (aka pootoogoo) 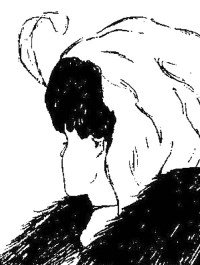 How old is that Lady?

Sometimes you look a thousand times at a picture and don't see the figure hidden within - even if you know it is there.
It is as if the biased way you first perceive something prevents you from seeing it.

As a matter of fact, once you manage to change the way your brain interprets the picture, it becomes the only thing you see.

This happened to me few years ago, as I was writing the story of the coffee machine created in 1884 by Angelo Moriondo.¹ 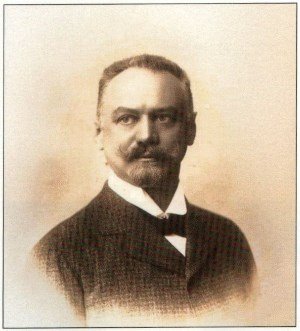 Today, Moriondo is considered as the father of the express machine (i.e. individually-brewed coffee served quickly, as its name suggests, working with steam pressure around ~1.5bar) and consequently the starting point of the history of espresso (single dose, fast-served coffee but extracted at 9bars with the famous "crema" on top of it).

Moriondo's name only surfaced in 1993, when Ian Bersten exhumed his invention from Italian patent archives in his famous book.³ His discovery diminished the credit assigned to Luigi Bezzera and Desiderio Pavoni who had been, up to then, commonly cited as the fathers of the espresso (mainly because of the picture of the 1906 Fiera di Milano [Milan Fair] which mentions the term for the first time). From this new perspective, they appeared to have been largely inspired by Moriondo, to say the least, although they achieve the spreading of the invention worldwide.⁴ 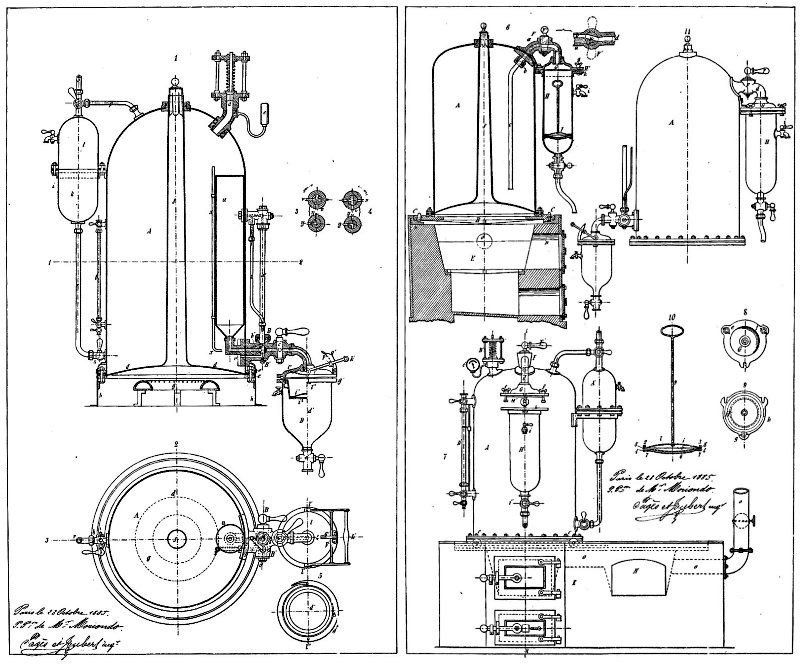 Four years ago (the centenary year of Moriondo's death), I tried to follow in Ian Bersten's footsteps.

I found bits of Moriondo's life, his famous family tree (the Moriondo and Gariglio chocolate factory), his "Gran caffè Ligure", and traces of his invention in journals and exhibition reviews... but still no picture of the machine. At that time, the only additional proof of the machine's existence was a patent drawing and an article from the Gazzetta Piemontese posted by his grandson Angelo on Wikipedia.⁵ 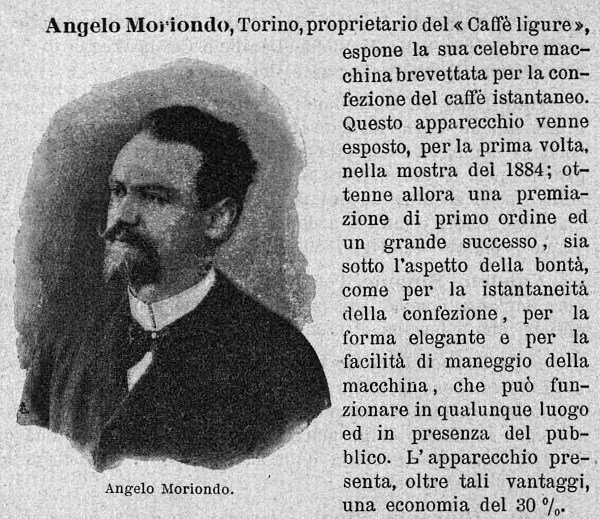 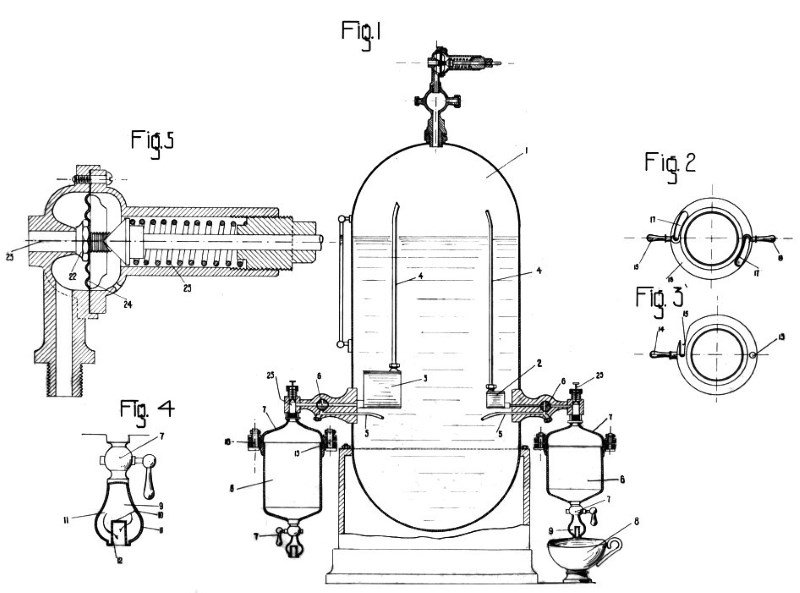 Drawings of the Angelo Moriondo 1911 "La Brasiliana" from Italian patent n. IT113332

I also discovered few other things: a picture of Moriondo from around the time of his invention, French patents, various references that show that the machine was built in different versions but in very limited number (for the Gran Caffè Ligure and the American Bar in Torino). More interestingly, I found another patent for an improved Moriondo machine dated 1911 and articles showing that Moriondo stayed in the coffee business (as a coffee roaster) up to his death in May 1914... but still no pictures of the machine. 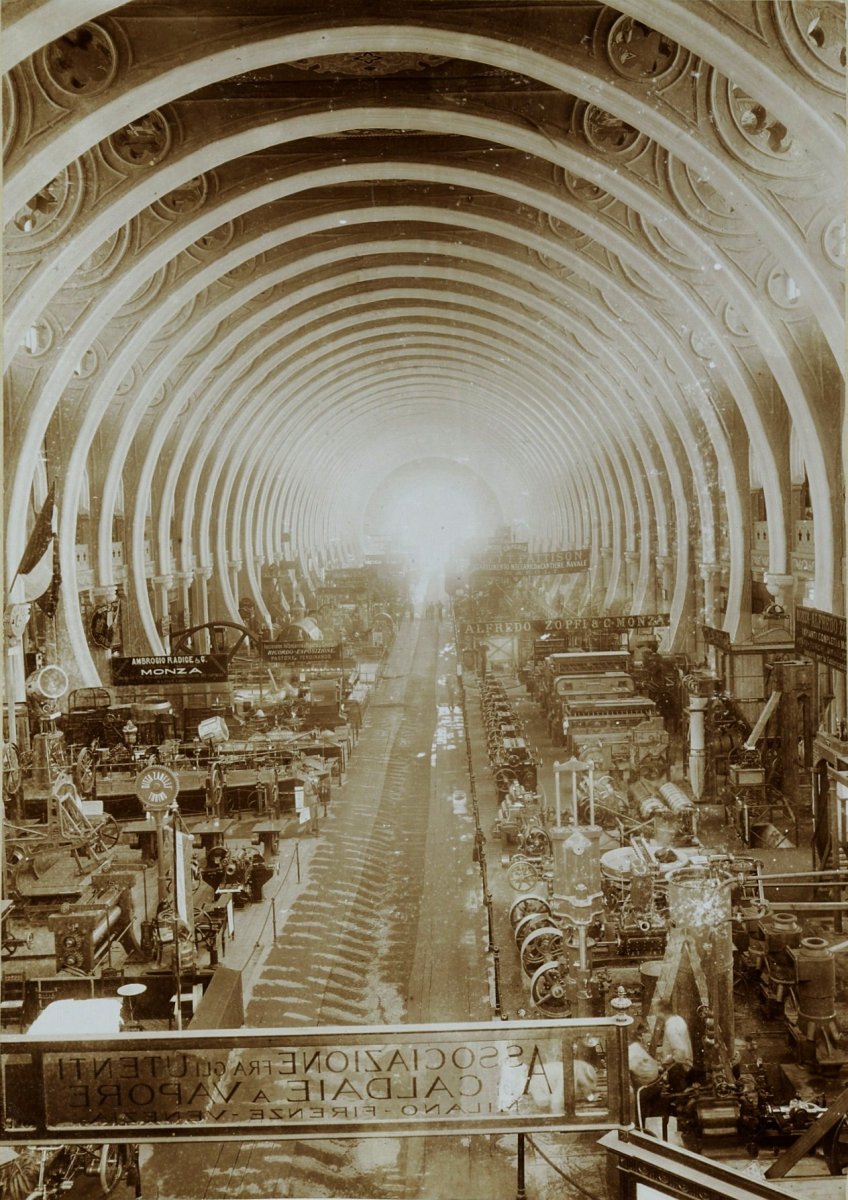 In fact, one model was standing in his Caffè (a song was even dedicated to it), but Moriondo also presented different machine versions at several exhibitions: the 1884 and 1898 Esposizione Generale Italiana di Torino, and the 1911 Esposizione Internazionale di Torino. I inspected very closely the rare pictures of these events to see if I could find it ... but in vain.

My journey ended up with a peculiar discovery: a Spanish patent with almost the same title,⁶ deposited by José Molinari in 1894, showing a hybrid between the two Moriondo machines but no mention to him. Though the document doesn't prove the machine existed, it shows a stunning design: an over-pressure valve, a manometer, a protected sight glass, a portafilter for single or multiple doses, a system to fill the machine with water while it is under pressure (as on Moriondo's patents) and, above all, a boiler covered with wood and circled with metal belts, giving it somewhat the appearance of a wine barrel. 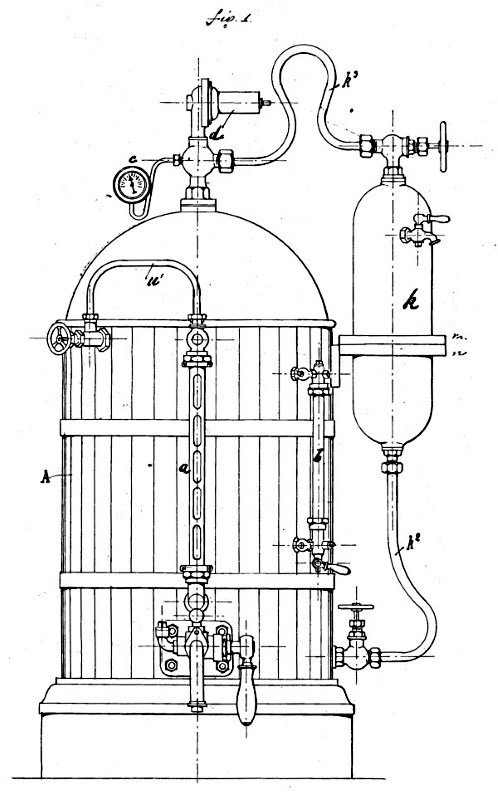 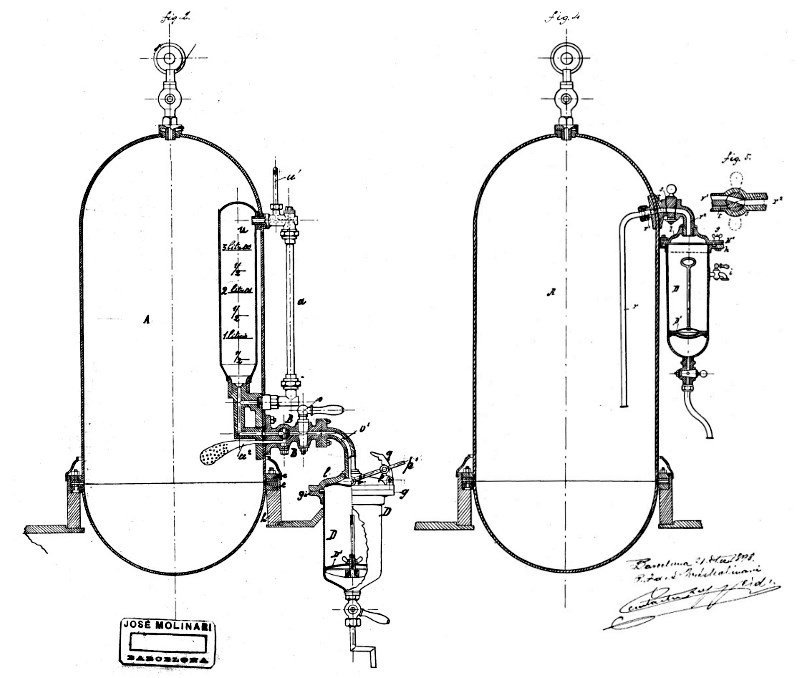 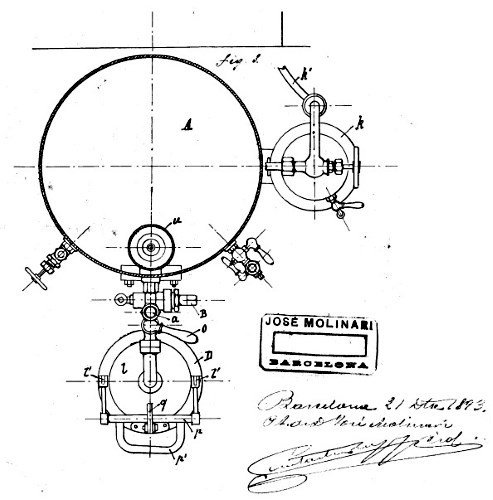 The similarity of the other patent drawings with the first Moriondo patent is remarkable, the figures even share almost the same lettering, proving that the Molinari instantaneous coffee machine was an evolution of the Moriondo machine itself. Except for the patents from 1884 and 1911 (neither of which mention a wood cover), there are no traces of other Moriondo patents. However, in 1898, Angelo Moriondo presented a (new?) instantaneous coffee machine at the Torino exhibition in the "Galleria del Lavoro".

Was Molinari, who bears the name of famous coffee roasters from Modena, a partner or were is intentions less honest? What's clear is that he tried to introduce the Moriondo Machine in Spain, more precisely in Barcelona, where the coffee business was very active at the time.

Acknowledgements:
I'd like to thank Thomas (aka bidowee), Gary Seeman (aka drgary) and last but not least, Ian Bersten for their useful comments, corrections and suggestions about the article.


(To be continued...)
https://cafeoblog.wordpress.com/
Top

Great research-----and that Galleria del Lavoro at the 1898 Torino Exposition is an astounding piece of architecture.
Top

More bits and pieces to flesh out the early history of espresso, great work!
Top

Thanks for sharing this. I love this stuff.
LMWDP #603
Top

Thanks for the comments, I hope you will enjoy even more the next two episodes.


OldNuc wrote:More bits and pieces to flesh out the early history of espresso, great work!

happycat wrote:Thanks for sharing this. I love this stuff.

Finding a needle in a haystack (part 2/3)
by Sebastien L. Delprat (aka pootoogoo) 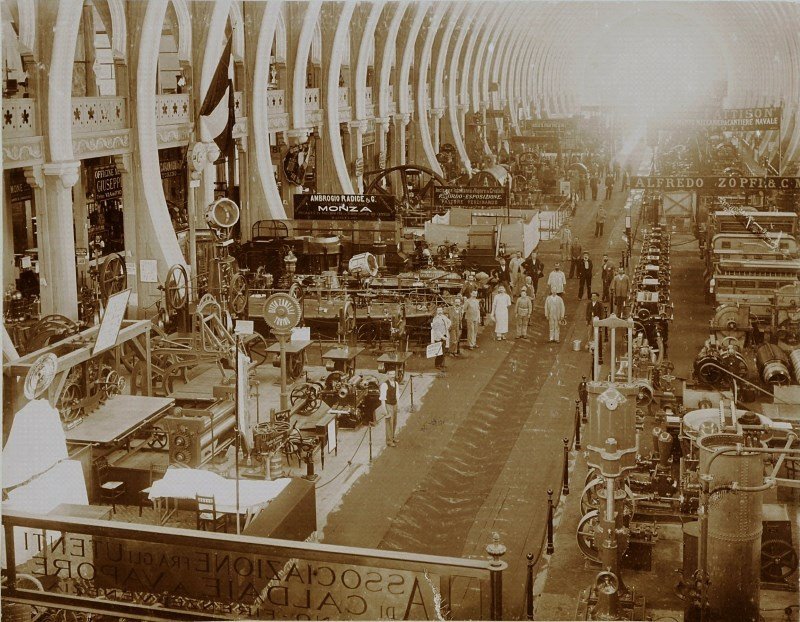 The answer came a few years later, from a document that I bought on an auction site. I usually rely on digital documents but this one, I had to get it for real. I still remember the feeling of opening the envelope with the Italian stamp on it and discovering a document on paper, more than 100 years old: an invoice that certainly bears the hand writing of Angelo Moriondo himself. The date is a bit difficult to read but seems to be September 13th, 1913... just a few months before Moriondo's death. This feeling was as strong as finding a rare lever machine and bringing it back home. 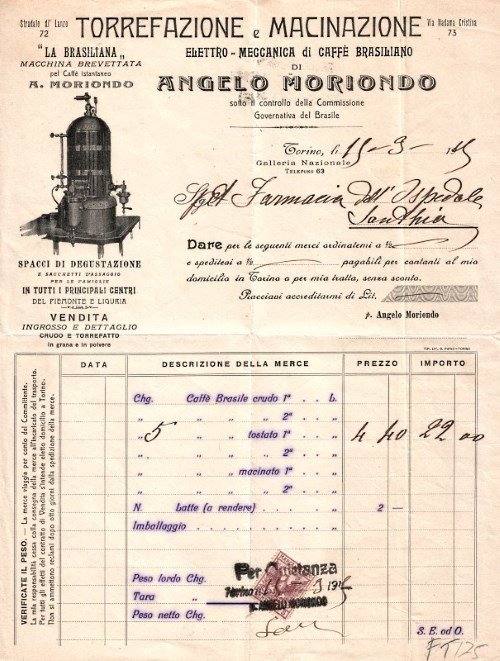 The invoice is for roasted Brazilian coffee, and contains three different shop addresses. It is mentioning a "degustation space" and selling of green or roasted coffee from Brazil, in bean or electrically ground. The most important part of this historical document is certainly the drawing of a Moriondo express machine called "La Brasiliana" (the name of the model patented in 1911), with the same wood design as the 1894 Spanish patent.

This precious document is really the missing link between Moriondo and Molinari, and served me as a key for future discoveries.

With this machine design in mind, I re-examined the pictures of official exhibitions and... in a tiny corner of one of them, something struck my eye. On the extreme left side of the picture (the one presented above), roughly half way up, I found this: 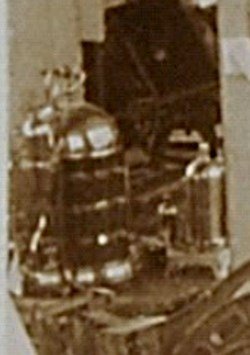 Could this blurry picture be the Moriondo stand exhibiting two coffee machines?

The "Galleria del lavoro", where this picture was taken, is exactly where his stand was in 1898, but... how to be sure?

The precise drawing of the José Molinari patent, allowed me to make a 3D model of the machine, and here is the result: 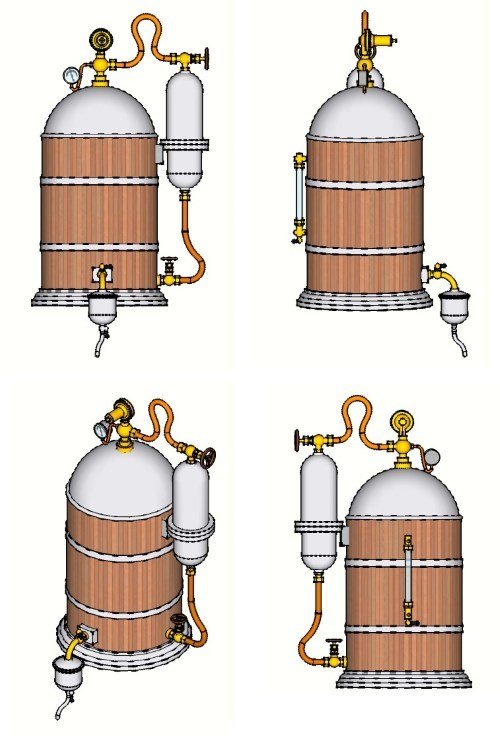 From there, I compared the model with the 1913 Moriondo invoice illustration : 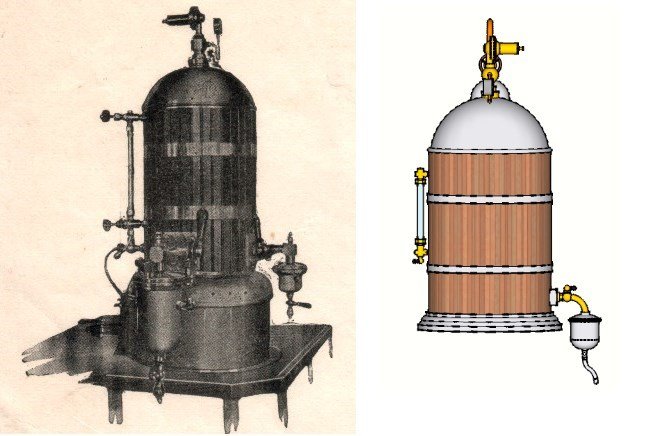 And, then, compared it with the 1898 fair photograph: 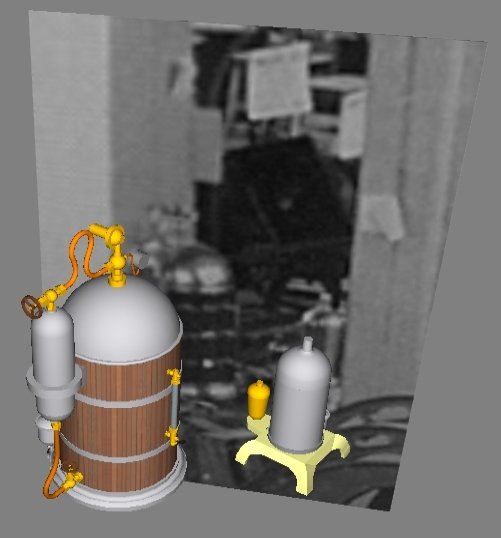 (The rest of the stand was created from other considerations, I'll talk about it in the last part)

The two machines match so well that I can say with certainty that this tiny part of the historical "Galleria del Lavoro" picture is the first and only photograph of the Moriondo machine.

Acknowledgement:
I'd like to thank Thomas (aka bidowee), Gary Seeman (aka drgary) and last but not the least, Ian Bersten for their useful comments, corrections and suggestions about the article.

(To be continued...)
https://cafeoblog.wordpress.com/
Top

Nice. I was going to suggest a 3d model based on the patents and here you did it.
LMWDP #603
Top

The Moriondo/Molinari thing has me wondering ... if I copy a patent from country A and file it in country B, what happens? What happened in the 1890s? Could there be lawsuit records about the conflict of all these patents or the Moriondo and Bezzera ones?
Jim Schulman
Top
← Back •
By accessing this site, you agree to the site's terms of service. If you need help with the site, please contact us.