The Impact of Frothing on HX Temperature Stability - Page 2


Ken Fox wrote: Perhaps I could thread a TC down the water intake siphon from which the water exits the HX, but aside from the fact that I can't figure out how to get the wire out there without making a leak through the seals, I'm concerned that the TC could become malpositioned and somehow fail to register boiler temperature changes and this could cause the boiler to overheat, resulting in blowing the pop valve, at an unpredictable time.

Well, here's another series I just did, this time with my 10 year old vibe pourover machine. This time I really mixed it up, to try to simulate a situation where you might have a bunch of people over and were making some straight shots and some milk drinks; since the frothing lasted 15 seconds, it would be enough for 2 drinks (on my machine, which froths like hell), so even though there were only 3 frothings, it would have covered 6 drinks if need be.

I had intervals of 5 minutes, after which there was a 50 ml flush, or 1.5 minutes (shotmaking pace of 1 drink per 2 minutes), mixed in, with 3 frothings of 15 seconds each. A total of 9 simulated shots were pulled over about half an hour. I began writing down the order of the shots and which were frothed and which weren't, but I lost track midway and decided to just omit that information as it doesn't really matter. The shot temp curves are all similar, with the familiar heat exchanger hump at the start. The part that might be attributable to the PID is the shot temperature stabilization for the last half of each shot.

Here's the results I got: 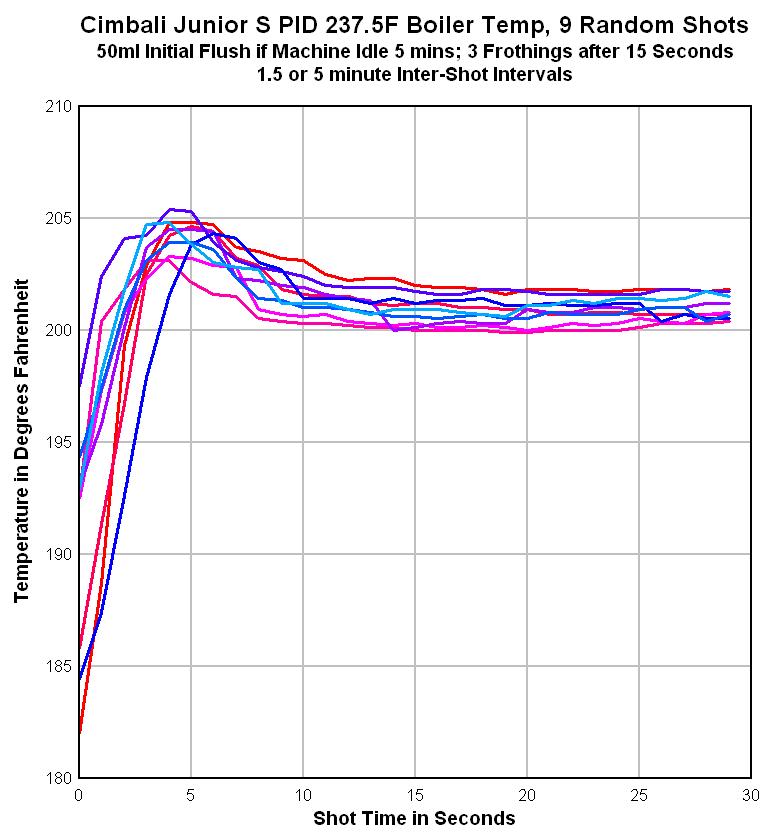 The qualification here is that I can't tell how much of these results are attributable to the basic design of the machine, and how much to the PID. The temperature variation appears to be confined within about 2 degrees F.

What this says to me is that in a normal, low volume home usage setting, at the speed that a good home barista normally works (slower than a pro in a busy cafe), that at least some home 110v heat exchanger machines can maintain a respectable shot to shot temperature variation in spite of how much frothing is being done.

Ken Fox wrote:In a business setting busy enough to do 10 milk drinks in succession, 110v machines are not generally used.


yes and no. there are plenty of busy settings where a 110v machine is required, and bumping up against the capacity of a machine is not limited to 110v machines. running a 220v machine flat out making capps/lattes can significantly deplete the steam supply, possibly sufficient to change the brew temperature.
Top

barry wrote:yes and no. there are plenty of busy settings where a 110v machine is required, and bumping up against the capacity of a machine is not limited to 110v machines. running a 220v machine flat out making capps/lattes can significantly deplete the steam supply, possibly sufficient to change the brew temperature.

Of course we are largely talking apples and oranges. You are speaking of a situation dealing with "the public" who thinks that espresso is a bitter black beverage that needs to be disguised in 20 oz. of milk so it will be drinkable. I won't serve a drink like that in my house no matter what; the biggest I'll go is maybe 6 oz. of milk with a double shot and I try to talk the person out of it. So if you are making more reasonably sized drinks where the milk isn't the overwhelming ingredient as one finds in many N. American cafes, then you would probably be a lot less likely to overwhelm a 220v. or even a 110v. heating element since the problem is going to be volume dependent.

Obviously, if you want to stay in business then you give the customer what they want, but if you come over to my house and demand a 20oz latte I'd just as soon you never came back so refusing to supply it makes it easier on the two of us

If you were making more reasonably sized drinks, say 4 oz. of milk in a milk drink, maximum (which I'm sure is more than you find in a cappa in Italy), do you think it would be possible to overwhelm a 220v. heating element?

I honestly don't know the answer to that in terms of temperature per say. What I have realized is that if I'm not "dead on time" with my flush/idle routine, I can taste differences in the cup, mostly with SO type coffees. A favorite coffee of mine is Terroir Northern and it's a love/hate deal because I get some amazing shots from it, but if I vary as little as 15 - 20 seconds on the intershot time, everything goes to hell.

I find the flush & go technique Chris talks about in his Bric' review much more accurate for nailing shot temps time after time +-<1f of target, ~198f to 206f on demand on my Bric' running 1.0bar boiler. This method of tuning the count down from flash pace to get 1f drops per count takes a bit of practice, then becomes pretty second nature. My count is a bit faster than 1sec per FWIW. Thanks to having use of a Thermofilter when I got my Bric' dialing in shot temps was a breeze. (a bit time consuming breeze, but a breeze) After initial HX cooling flush, doesn't matter if it takes 35sec or a couple minute to build the shot (or next shot in a series), the flush & go flash will just be a bit longer or shorter before beginning the count down.

I've also found starting steaming right after starting the shot pull not a problem with Bric'. However, this is using a slower GP2 tip, which suites my weak capabilities! (About 35sec for 3oz for cap. Yeah I know that's slow, nothing like commercial ~10sec speeds) If just doing back to back shots the recovery time is ~minimum 35sec after post shot group flush and PF wiggle in a long series to maintain shot temps. (tested out to 30 shot series multiple times). When also steaming recovery time is longer but nothing that holds back my meager skills! (I don't recall the exact test time results off the top of my head, seems like it was 50sec or something like that) I'd suspect the Vetrano recovery slightly slower because of it's lower powered heater. When I had the Bric' up around 1.3bar steaming was stronger, but the flush & go flash also much longer so I tuned for a compromise favoring straight shots.
Mike McGinness, Head Bean (Owner/Roast Master)
http://www.CompassCoffeeRoasting.com
Top

Not to put too fine a point on it, but what you say is true for that particular HX machine, not all. I made the mistake when first evaluating the Cimbali Junior of applying the flush-n-go technique I preferred for La Valentina. The results were disasterously bad. I contacted Ken and he was kind enough to set me straight (Jim Schulman also provided a number of Junior-specific insights). Some semi-commercial machines perform better with the "rebound technique" documented in HX Love (e.g., Andreja Premium), others the flush-n-go technique (e.g., Elektra A3). And others are have unique expectations (e.g., Cimbali Junior).
Dan Kehn
Top

I'd have expected a flush & go count speed to vary machine to machine, but are you saying it just doesn't work accurately at all with some like AJ? Interesting. Since I haven't had the opportunity to play with zillions of machines I guess I got lucky when I read about the technique and bought the same machine!
Mike McGinness, Head Bean (Owner/Roast Master)
http://www.CompassCoffeeRoasting.com
Top
← Back •
By accessing this site, you agree to the site's terms of service. If you need help with the site, please contact us .