How to remove the dispersion screen and gasket of an E61?

Am having a problem with the Isomac Rituale. The pf has been un winding itself while pulling a shot and wet grounds are going everywhere. Thought it was the pf and tonight though I would clean the screen and gasket while it was down. Turned the machine over and there is no screw in the screen which can be unscrewed to remove the screen and gasket. Turns out it appears that the gasket has shifted and no pf will lock until the gasket is rest into its correct position ? Looked on the top of the group head and there is no screw there. There is however an allen wrench slot at the back of the group head towards the body. Is this what is holding in the screen and gasket?

Question....how do I remove the screen and gasket in the group head on the Isomac Rituale?

If torquing the portafilter tighter doesn't seal, then the gasket is probably dry / worn out. Removing it without damage is possible, but it isn't easy. Let's begin with a short review: E61's are pretty much all the same -- the gasket is wedged in a groove and the gasket holds in the dispersion screen.

The article E61 Group Maintenance has lots of pictures and instructions on how to clean and replace the grouphead gasket / dispersion screen. It suggests using an awl / pick to grab at the gasket, but I've squeaked it out with no damage two different ways: If the gasket is shot, then there's no need to worry about nicking it. Follow the article's instructions and reinsert a new gasket / screen.

PS: There are two types of dispersion screens for the E61. The "ungroovy" ones (left) usually have a thin metal ring spot-welded around the perimeter of the screen and a "dot" welded to the center, whose purpose is still a mystery to me. I've gotten both kinds off without nicking the gasket, but the ungroovy ones are more challenging (and I scratch the sides of them more

PSS: Also see What is that ugly Allen screw for?
Dan Kehn
Top

While rebuilding my Faema, I removed the screens and gaskets a couple of times. I found that a paint can lid opener works wonderfully. You know, that funny short handled gizmo the paint store gives you for free when you purchase a gallon of paint. No damage to the gasket. I used it on the gasket, not the screen.
Dave Stephens
Top

I think it's time to replace the group gasket on my Expobar Office Control. Never having done this in the past and there being no instructions on how to do this in the supplied manual, I'm looking for help. Is this a simple case of pry out the old and press fit the new or is there more involved? Additionally, as I'm using a naked PF by Lino, is it best to use the original size of 8.5mm or the 8mm advised by Chris Coffee.
Top

Tazza d'oro wrote:Is this a simple case of pry out the old and press fit the new or is there more involved?

That's pretty much it. I merged your thread with this thread on the same topic to keep them in one place. EPNW's E61 Group Head Gasket Replacement Tutorial & E-61 Maintenance Tutorial includes step-by-step photos.


Additionally, as I'm using a naked PF by Lino, is it best to use the original size of 8.5mm or the 8mm advised by Chris Coffee.

I used Lino's portafilter with the stock gaskets without problem on the Brewtus and Lever, which I believe share the same grouphead as your Control (confirmations or corrections welcome).
Dan Kehn
Top

if i had to guess, the little nub in the middle of the dispersion screen is there to cover the screw/hole where the coffee comes from.

im going out on a limb, but im thinking that without it, the coffee wouldnt properly be spread over the entire surface of the screen. maybe the machines that use this style screen have a different type of screw in the head? if not.. wouldnt that mean switching it to a 'groovy' one would work fine?

PS- i had the same problem when i decided to look into my grouphead and screen. you really have to torque it, harder than you think. also, test with a backflush disk, it saves coffee and builds more pressure.

I wouldn't bother replacing the dispersion screen unless it's damaged.
Dan Kehn
Top

I use a combination of 1) loosening the gasket by releasing the pf just as the pressure starts to build to 4-5 bar while pulling a blank shot with the blind basket, and 2) Cannonfodder's paint-can tool trick. It takes less than 2 minutes, and is very easy to do, even with a hot machine.

I made the mistake recently of getting distracted after brewing a shot and leaving the pf with the spent puck in the machine for an hour or more. Even after a standard Cafiza backflush treatment, here's what my screen looked like: 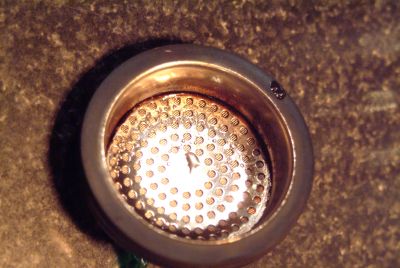 Moral of the story - it pays to remove the screen and gasket every now and then just to make sure things are as clean as they should be.

Mark
Top
← Back •
By accessing this site, you agree to the site's terms of service. If you need help with the site, please contact us.