How power hungry is your coffee hobby? - Page 2

Andy,
I'm not sure what "true power" or power factor corrected" mean, but I'll put up my numbers that are a bit out of line with yours.

My Kill-A-Watt shows a cumulative kilowatt-hour measurement. Today I measured consumption for a 24-hour period (including machine and grinder), and got 1.4 kWh - which means 1400 watt-hours total for the day. If I divide that by the 24-hour day it's drawing 58 watts on average at any given moment, but since it was really on for only 11 hours, it draws about 127 watts on average while it's switched on. I'm guessing you're calculating watts on average for the entire 24 hours, given you're way below my numbers and said the machine is only on a few hours during the week (did you mean a few hours a day?).

I have a single boiler, insulated.
Dana Leighton
LMWDP #269
Top

Interesting numbers... In line with mine, though reflective of a much greater per day on-time than in my setup.

My numbers were an attempt to gauge how much various items in my coffee hobby were costing me relative to other often-used items around the house. Because of this I did not track the total "on time", that is when the power switch was on and not when the boilers turn on, of my equipment. (Perhaps I should have, as that would allow us to compare relative machine performance...) I just measured the total power consumption (kWH) over a long period of time, ~2 months, to average out varying usage patterns and computed the equivalent power (W) over the total measurement period rather than just the actual "on time".

So because of that any differences between our numbers has to do with both machine differences as well as different usage (on time) patterns. In a sense my post was about how much of our total energy we end up consuming in our hobby based upon equipment characteristics and our usage patterns, particularly when measured against always-on equipment around the house, such as one's refrigerator.

I'm still surprised that my momentarily-on Brewtus takes nearly a third of the power than my always-on 5+ years old refrigerator, (no specific fault to the Brewtus, mind you, which I just love!), and even more so that my always-on hot water dispenser consumes more than half!

Regarding the on time, I was estimating the on time (per day) during the week as well as on weekends. I probably could have said that better. As to power-factor it's probably not too important with respect to coffee equipment (where most of the power consumption comes from running heating coils vs. pumps), but a measurement that's not power-factor corrected would be an "apparent power" measurement as opposed to a "real power" measurement, the latter of which is what we pay for to our utility.

Basically some measurement devices can be thrown off if the equipment being measured uses current to temporarily store energy (usually in a coil or capacitor) only to give the energy back. This back and forth increases the amount of instantaneous current drawn but actually does not do any useful work and hence is neither charged by the utility nor should be measured when auditing equipment. The "Kill-a-Watt" does measure true power (W or kW), but also measures apparent power via its "VA or kVA" measurement.
Top

For the benefit of those who haven't read a previous "leave it on, leave it off?" debate, a short primer:

My take on it from last time:

I can appreciate the convenience of always-on espresso machines, especially for commercial units that demand hours to stabilize. But I've still not heard any compelling evidence tying premature component failures to on/off cycling. Simply put: What components are more likely to fail if a machine is run four hours a day versus 24/7?

In past discussions, I've read the following disadvantages of on/off cycling: I've read the following advantages of on/off cycling: Looking at the list above, the one that sticks out for me is the pressurestat. They cost around $40-$60. If I remember correctly, that roughly equates to the added energy cost of approximately two years' 24/7 operation. It wouldn't surprise me if 24/7 operation would decrease some pressurestat's lifespan by that much (e.g., CEME, MATER).

The calculations for a cafe are a lot easier. If the cafe closes at 10pm and reopens around 6am, realistically they have little choice but to run 24/7. For those with machines that warm up in 30-60 minutes, it's an option. Is on/off cycling a more economical option? I don't know for certain, but my guess is yes, it is for most prosumer / semi-commercial units.

And Andy's insight in support of the above:


AndyS wrote:Turning the machine off overnight will always save electricity, no matter what size it is. People who say "it takes more electricity to warm it back up than you save by turning it off" are incorrect.

There are two caveats:
1. The amount of electricity saved may be quite low, as Mike says.
2. Some people claim that certain machine components (eg, gaskets) last longer when the machine is on 24/7. (Unfortunately, many of these people are probably just repeating anecdotal evidence that does not constitute real proof. One would think that the major machine manufacturers have a lot of good data on this, though.)

For more details, see one of the more thorough discussions of this frequently asked question below:
Etc. etc.
Dan Kehn
Top 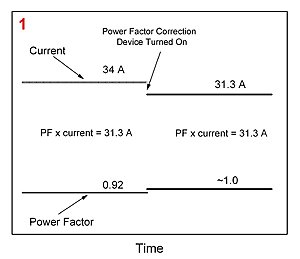 Power factor correction devices have no effect on a typical household electric bill because of the relationship shown here—activating the device reduces the current drawn from a power line but simultaneously increases the power factor. Electric bills are based on the product of the two, which remains the same

cannonfodder wrote:Thankfully I powered her back up Tuesday (got a new job).

That is great news about the new job! Congratulations!
Top

I still need to grab that electric bill. There are many factors that go into how much power a machine will consume. How big is the boiler, how many watts is the element, single boiler/double boiler, ambient air temp, machine use, etc... I have one of the big boxes, and Elektra A3 but I did insulate the boiler years ago. I had one full month cycle with the machine off and there was a marked drop in my power consumption, more than just a few dollars.
Dave Stephens
Top

I haven't a Kill-A-Watt device, I used a simple current meter (go the old way).

Has someone a better criteria to estimate bill?
Can someone forecast how much I can save, say in %, if I insulate boiler?

Interesting numbers, piamberti, something that I would not have guessed. Makes me also consider profiling my own turn-on costs...

However I noticed that you used:

for duty cycle rather than:

When the numbers you provided are corrected for that it moves your steady-state costs even lower, and hence your break-even point even further out...

Quite a surprising finding, and I find your calculations (other than the duty-cycle computation) otherwise correct. However nothing really replaces an actual on-the-machine run-time monitoring over many days of actual use. I'd be curious how your numbers would look when actually monitored using a "Kill-a-Watt" type of device...
Top

Can someone forecast how much I can save, say in %, if I insulate boiler?

you're correct. Thank you to point out my mistake.
I'll take a look at a watt meter, to confirm or amend my guess.

Pierluigi
Pierluigi
Top
← Back •
By accessing this site, you agree to the site's terms of service. If you need help with the site, please contact us.