Well, I've finally got around to arranging the first head-to-head blind testing session of pressure profiling vs. traditional profiling, which will be conducted tomorrow morning. I wanted to put out a basic hypothesis and a general method for testing it, and invite suggestions, particularly from those of you with experience in these kinds of tests. Please note right from the start that this is a pretty modest test that will likely only test a single general profile, and won't even have the benefit of PID-controlled profiling. I don't expect to get anything approaching a far-reaching conclusion about profiling, but I do want to confirm (or relinquish) my impressions thus far about the profile that I've focused on.

So, the test setup will be as follows:
Jon, Paul, and I will determine how we divide prepping and tasting in the morning, depending on how many extra tasters we have (there might be up to two).

For shot evaluation, shot preparers will record dose/shot volume, any unusual flow characteristics, any necessary adjustments we make to either dose or grind, etc. I want to be as thorough as possible with our notes here and publish them.

Tasters will get their own scoring sheets, though I don't intend to have them score shots unless they choose to voluntarily: tasters will be asked to characterize and differentiate the shots and guess which one comes from which machine, based on the hypothesis that we're making or any other pattern they observe in the shot pairs. The hope is that the tasters will be able to guess correctly at the end. We'll serve water and/or carbonated water as a palate cleanser/refresher for tasters to use in between samplings.

As for some other specifics, Jon and I are thinking that at this stage, the best mechanism for testing is to use the same grinder at the same grind setting for both machines, and dose them similarly (identically if possible). I anticipate that there will be a pattern where one has a smaller volume than the other (probably the profiled one will be a little shorter), and I am conflicted whether to compensate for this by updosing slightly or just by stirring the shots and equalizing them by drawing some off of the larger one (I'm hesitant to add water to the smaller one, as one thing I anticipate is that tasters will notice reduced body in profiled shots, and adding water will skew that significantly). Any suggestions how to deal with that would be appreciated, but I am pretty convinced at the least that using the exact same grind for each setup is key to doing an absolutely direct comparison of profiling.

For what it's worth, the profile I mentioned ('vaguely lever-like') will be starting the pump at about "50%" for preinfusion, raising the pressure as soon as the gauge stabilizes (and you can hear the chamber fill), but smoothly, to 8.5 bars, holding it for about 7 seconds, and then gradually dropping the pressure to 7 bars till the end of the shot.

My hypothesis for this profile is that tasters will consistently observe the shot (compared to the flat profile) is shifted away from bitter, either to sweeter, brighter, or both. I anticipate that the tradeoff will be reduced shot body. I am curious if tasters notice a consistent reduction or increase in shot complexity/nuance, and also curious of their overall impression (if profiling, assuming it's consistently different, improves the shot for them and why).

Again, your thoughts are welcome; thanks for reading... let me know if I missed any key details.

1. Ignore all suggestions from the H-B peanut gallery.

If you choose to ignore suggestion #1

2. Do as you said, keep grind and dose the same.
3. Pull comparison shots to identical mass. For example, if you're pulling shots that weigh 25g with the flat profile, also pull 25g shots with the "lever" profile. Do this using either the GS/3's flowmeter, or in manual mode pulling shots onto a scale.
4. Keep your expectations very modest, that's the secret to avoiding disappointment!
5. Make sure to maintain a thick skin when receiving feedback on your experiment.

If people can learn to distinguish the two kinds of shot reliably, then the taste differences they are using to make the distinction are inherently credible.
Jim Schulman
Top

Good stuff, I look forward to hearing how you get on.

I've popped the 0.6mm restrictor back in mine as I was having trouble slowing the pre-infusion enough for my liking. I probably need to lower the water pressure regulator but access to it is very difficult at the moment - I'm moving in a few weeks and then it will be easier! I'll eventually get around to getting a slightly larger one as Andy S and Bill C have suggested. I also think its a good idea to stick to the one grinder if its manageable to do so.

Hope you have fun!

Success! We had 4 tasters who all enjoyed a number of great shots of Toscano. The blend was an excellent choice for the test, and Jon and I both agreed it was pulling the best we'd ever had of the blend. All in all a fun time was had, and while we definitely had some hiccups in the beginning (which you will see in the raw data), we settled on something that worked well and got several rounds that we all felt good about.

I'll post the raw data as soon as I have time to transcribe and collate it from the individual notes and the master shot record we kept. Of course my narrative and detailed conclusions will accompany that. This may be a few days; sorry, but I am wiped out and there's another test we have to get to tomorrow for single dosing, then my anniversary, New Year travels... yep, that time of year.

In the mean time, here's some pictures from the setup of the testing. 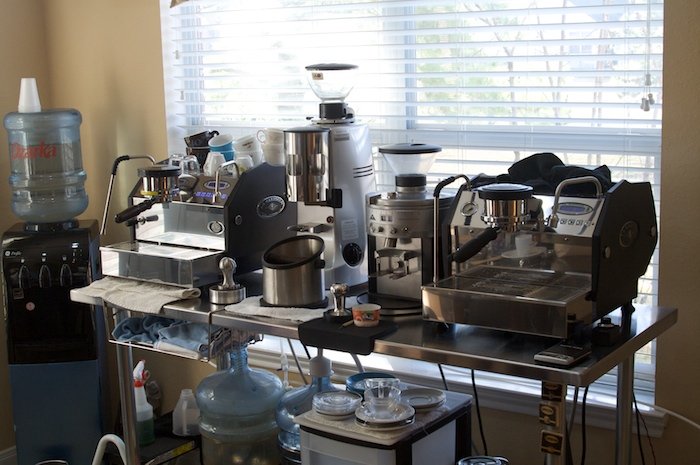 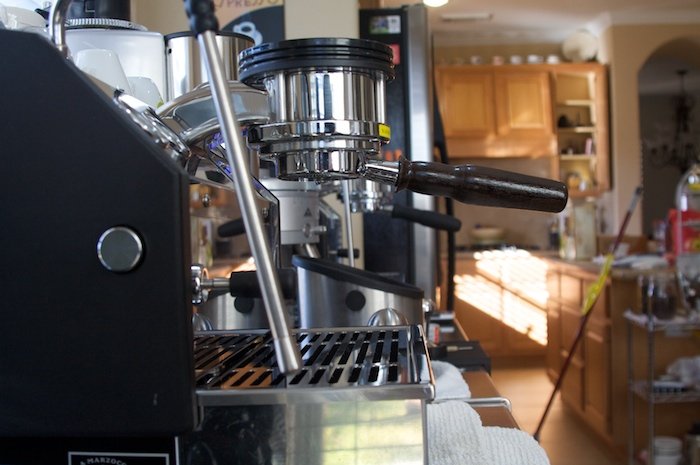 Closeup of Jon's. You can see Juanjo's handiwork on the custom wood portafilter. 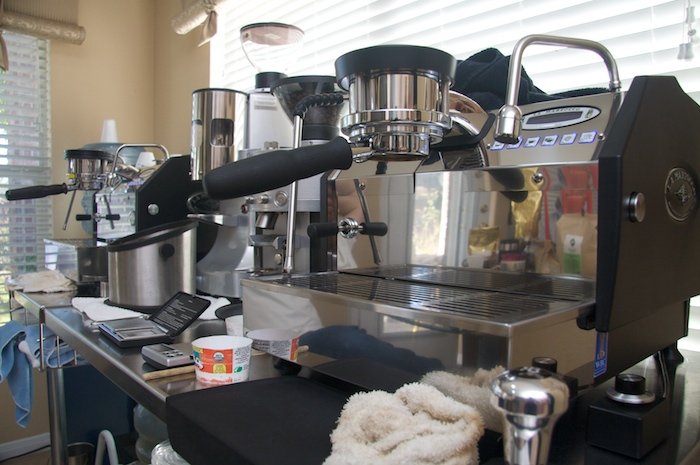 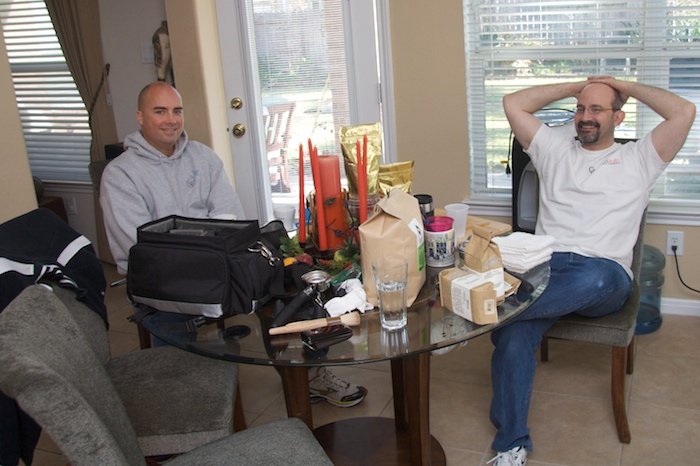 Paul & Jon chatting while we wait for my just-installed GS3 to heat up & stabilize.

What a mess we made! Man, my GS3 is still movable, but wow, am I ever glad to have confirmed, side by side, that there's no perceptible difference between the stock GS3 and my modded pump-GS3 when I run it 'flat.' Subsequent blind tests will definitely be done at my place. Even with no pump inside and drained boilers, that thing is no afterthought in my arms.
Nicholas Lundgaard
Top

Looks awesome... Let me guess Nicholas, yours is on the right??!!

EDIT - I can see your pump controller now. First thing that caught my eye was that familiar group-cap.

I look forward to hearing both of your thoughts, excellent stuff.
Top

Chris, yep that's mine on the right.
Mark, yep. We enforced exactly identical dose, and Jon ended up doing the shot prep since we saw some variation between the two of us that was mucking with the results. So, Jon prepped both baskets for the last few rounds; I defer to him as the better barista, particularly on equipment and technique he's used daily for a long time. Anyway, when you're enforcing dose like that you really have to redistribute after spooning off any excess (usually 0.2-0.3 grams on one shot) or you regret it when you watch the pour. WDT is what Jon uses, so it's what we used.

WOW! How do I get a cup of coffee at this place!

Billc wrote:WOW! How do I get a cup of coffee at this place!

It's my house, with Nicholas' machine added to my setup.
If you ever find yourself in Houston, please do look us up! It would be an honor sir

Jon Rosenthal
Houston, Texas
Top
← Back •
By accessing this site, you agree to the site's terms of service. If you need help with the site, please contact us.