First let me say, this is the most helpful forum I have ever been a part of. Really amazing. Thanks to each of you.

I have a quick question... so I am now (thanks to everyone's advice) using the hot water wand to pull some water through my machine so that the pump kicks in and fills the boiler completely before pulling shots or steaming. This is to avoid the problem I was having where the pump would kick on midway through a steaming session. This solution is working well.

However, I noticed that as soon as I turned the knob about 3 ounces of grey water poured out and into my (white) cup. Is this normal? I don't use the hot water wand, really ever... until now. Is it just residue in the wand from no use or something I should be concerned about?
Top

Do you flush your boiler once in a while?

The boiler on your HX is only used to generate steam and feed the hot water wand. If you have never flushed the boiler (i.e. emptied the boiler and forced the machine to replenish it) and never used the water wand it has some old water sitting there, getting slightly renewed by the loss of water through steaming only.

Some people use the hot water wand on a regular basis for americanos or tea. Some, like me, flush it out regularly to keep the water "fresh" and to control the overall hardness of the water in the boiler.

To do this, bring the machine up to pressure (somewhere around 1 bar on the boiler gauge), turn the machine off, take your reservoir out, put some espresso cups underneath the machine to tilt it so that the hot water tap side is lower that the steam wand side and open the water tap (you need a bowl or recipient or some sort under the tap of course). Most of the water in the boiler will come out. Close the tap.

Next, put the machine back level, make sure you have a full reservoir of water in and turn it on again. You need to be careful here because your boiler is almost empty and you do not want to burn your heater element. The pump should kick in and start to fill the boiler. If it does not, flip the machine off or you risk burning out the element.

I have not had problems so far but there is a way to do it in a "safer" manner: you can turn the machine on for 30 second intervals, waiting 5 minutes in between (from Chris Coffee website). This will eventually fill up the boiler and the element should not get hot enough to cause damage.

Some other machines have a nice feature i wish the rockets had. They have a three position power switch. One position is off, one position is pump/heater is on, and another only powers the pump. This last setting can be used to fill an empty boiler with no worries.

If you water is quite grey and/or has a funny smell or taste, you may have sucked up some milk through the steam wand (i.e. left milk on the wand, valve partially open and allowed the machine to cool...)
Damn this forum, I've had too m..muh...mah..mmmm..much caffeine!
Top

To underscore Marc's point, if you only steam, the boiler concentration of minerals will continually rise. Below is an example of what ugliness can result: 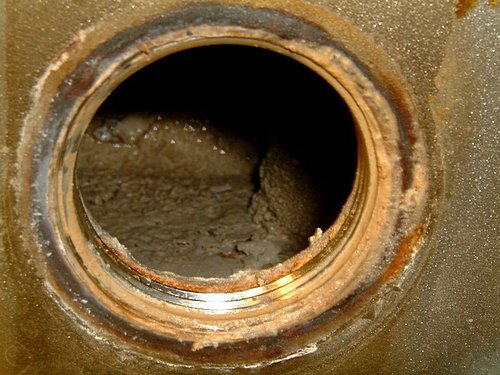 Unless you are using distilled / reverse osmosis water, the boiler must be descaled from time-to-time.
Dan Kehn
Top
← Back
By accessing this site, you agree to the site's terms of service. If you need help with the site, please contact us.