You and I don't have to worry about this. Our pressure gauges (your -900 and my -920) are in the right place for this kind of shot pulling right off the showroom floor.

Ironically it was Jake who pointed this out to me when we were discussing "Slaying" this machine.

Tonefish wrote:So you did not install the thermometry in the cam chamber as per the link? Curious then, where on the group face are you referring to?

The link shows the thermometer (Erics) in the group head. I installed a pressure gauge into the cam chamber for group pressure. I was just hoping to do it the other way around and use a thermocouple but temperature accuracy was better this way. Pressure was the same because water doesn't compress. It has all been working very well.
Michael
Top

While I'm still debating if it's worth bianka-fying my Mara or it's easier to sell her altogeter to get the Bianca instead.... my Mara had her first leak.
-around last weekend i've noticed that the table's surface under my machine was a tad too wet... wrote it of as me being clumsy while feeling her.
-Today though, the water level sensor was acting all out of wack - which forced me to take a waaay closer look under her and sure enough - she was dripping.
-upon disassembly it didn't take long to figure out the culprit: 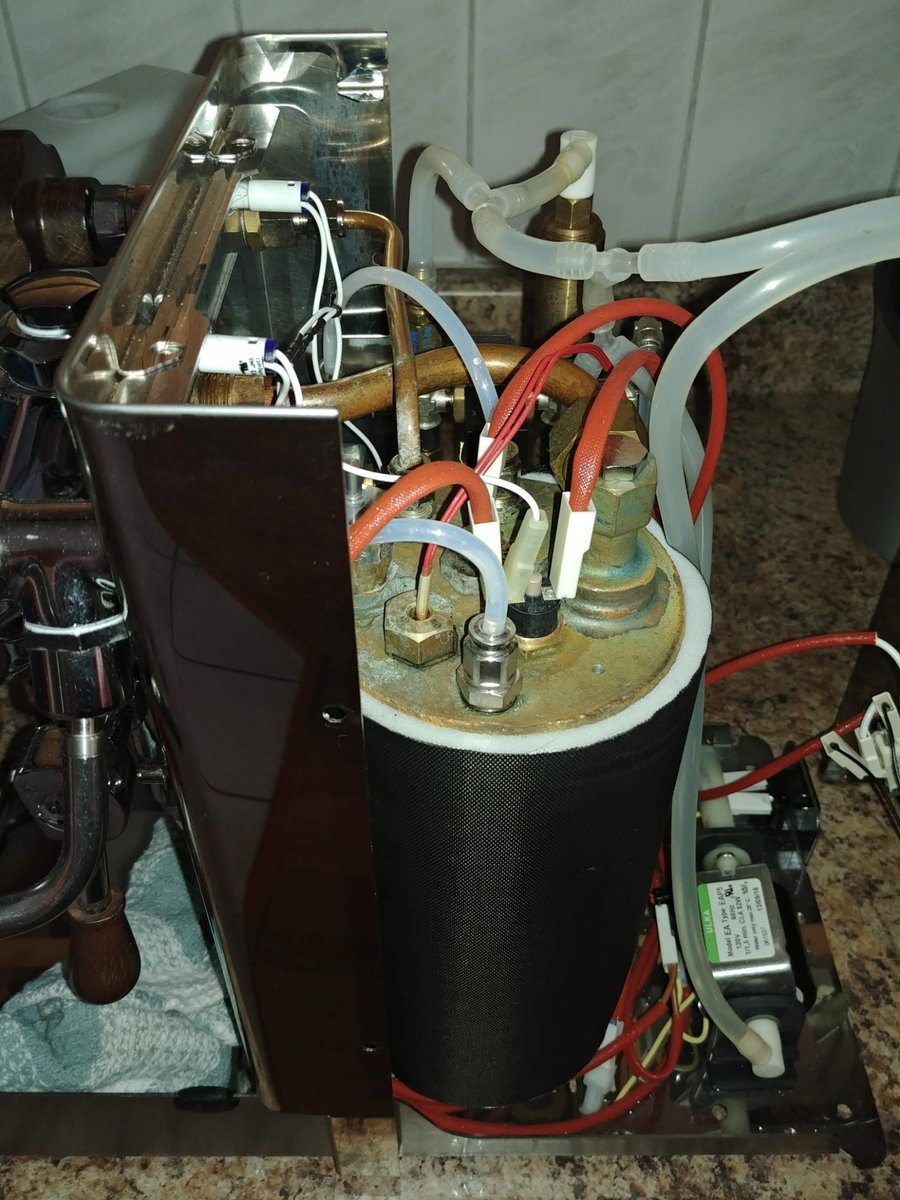 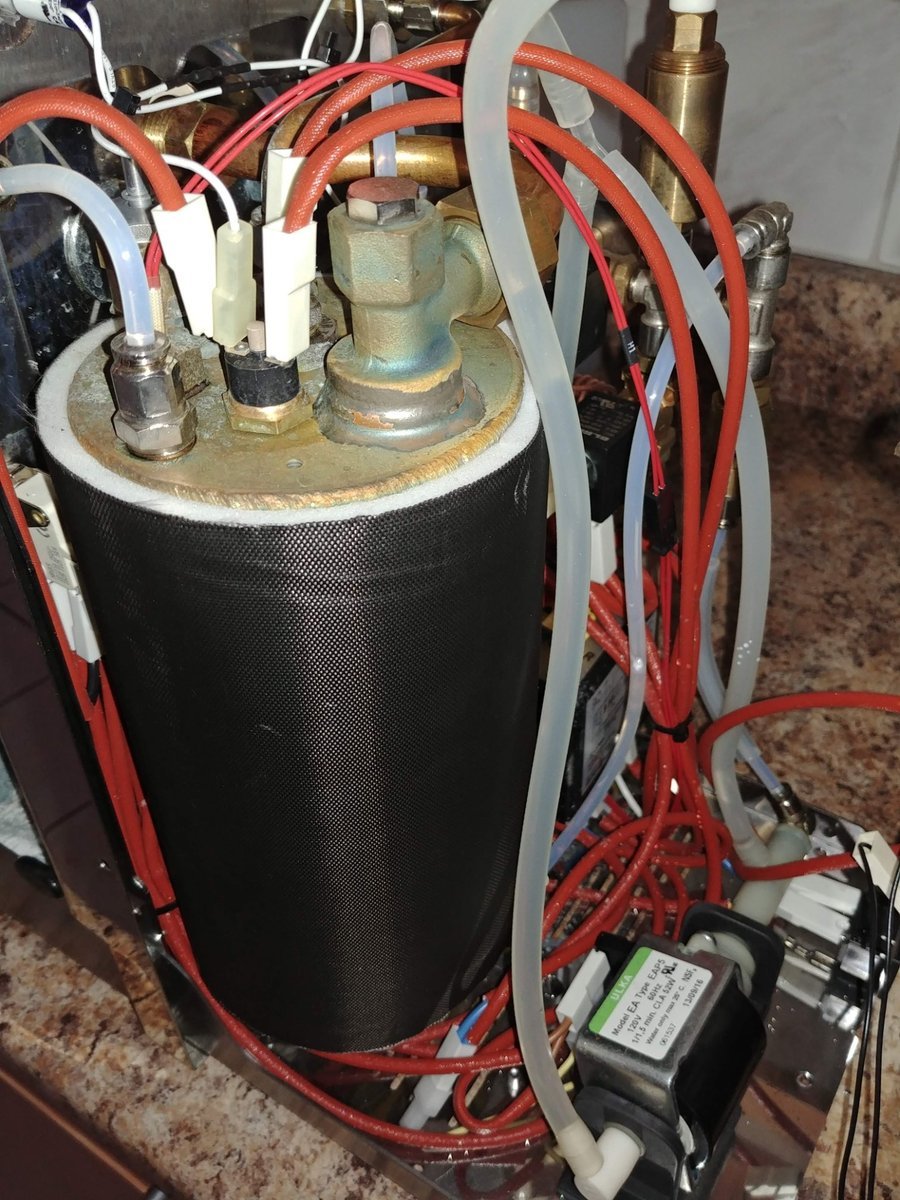 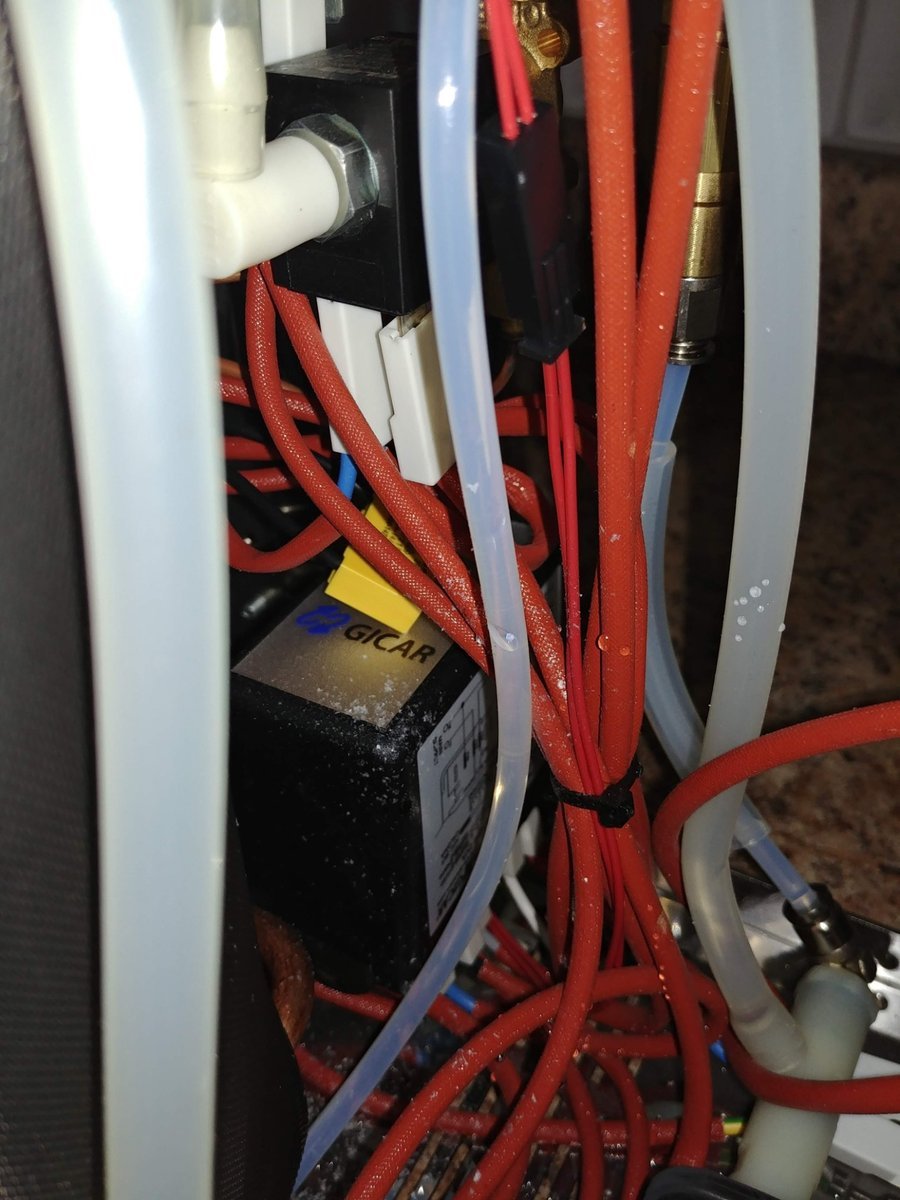 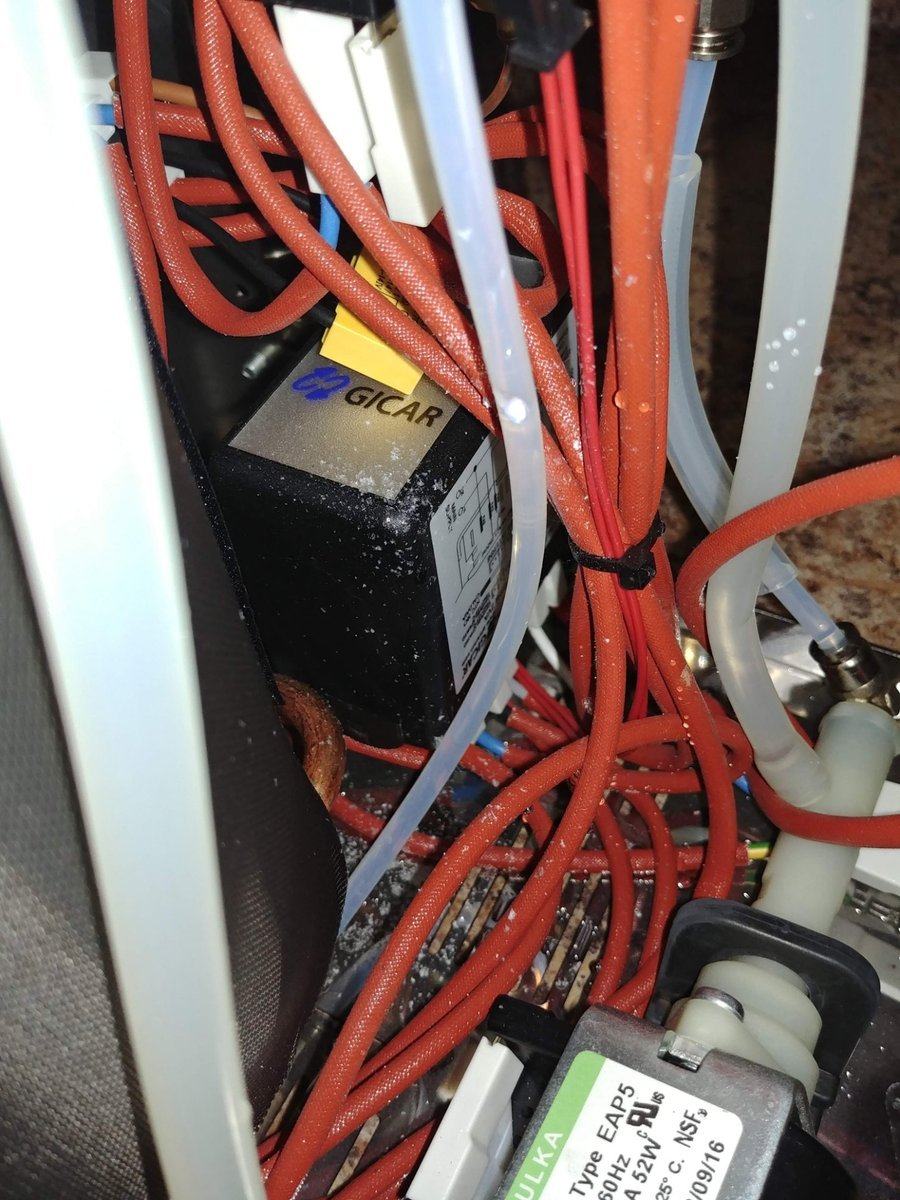 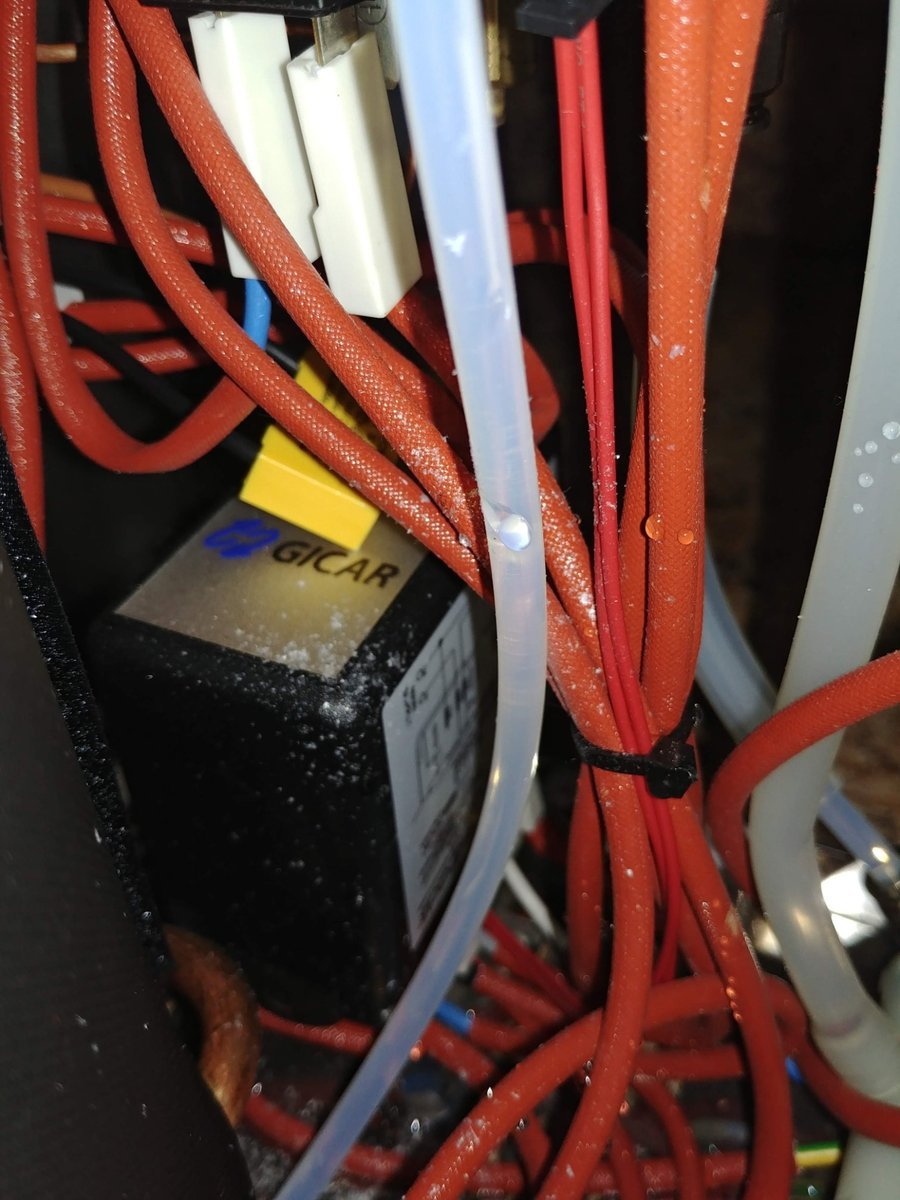 -the grupo water supply tube - which happens to vibrate along with the vibe pump - kinda worked itself through against some wire connectors. NB the white shavings laying around.
Seems kind odd that this tube isn't sleeved - while there is at least another one in the system, using the same material, but sleeved into a soft pu-tubing for protection. Imho - a definite shortcoming from Lelit.
-finding the replacement part became a challenge since none of Montreal's "true Italian" espresso machine's stores have their service departments working on Saturdays. Luckily - the last store which I visited pointed out that there's an official Lelit service center (and importer) just down the street - which I was totally unaware of and which happened to have their service/parts stuff working on a Saturday. So I've got the parts required along with a quote for a Bianca. Oh and i did get some larger diameter soft pu-tubing.
-overall it was an easy fix which was very frustrating in terms of finding the right parts... Turns out - not all Italian brands are using the exact same parts. Not the impression that i've got while fixing some previous findings from classifieds... as it turns out.
-While she was open - I had my first - and a fairly good - glance about her's insides. Looks solid enough, albeit - I wasn't too keen about how much water the vacuum valve spits around while settling in place.
-Our Lelit distributor's core business is with Jura machines... so it was kinda fun to watch the "typical" crowd who are shopping for this kind of "coffe-making-machines"... at least, Jura-s are using either ground or whole beans and not the pods.
-moral of the story: if you're keen about keeping your Mara as a daily driver - get your grupo hose inspected and have some spare on hand.

alexeyga wrote:Greeting coffee aficionados!
......
-upon disassembly it didn't take long to figure out the culprit:
......
-the grupo water supply tube - which happens to vibrate along with the vibe pump - kinda worked itself through against some wire connectors. NB the white shavings laying around.
Seems kind odd that this tube isn't sleeved - while there is at least another one in the system, using the same material, but sleeved into a soft pu-tubing for protection. Imho - a definite shortcoming from Lelit.

Glad you got fixed up! Never imagined a vibrating tube would be a culprit. Was the Lelit rep surprised?

Also, and interestingly enough, regarding the vacuum valve spitting water, one manufacturer boasts the design feature of doing so to provide steam to the cup warmer. Cheers!
LMWDP #581 .......... May your roasts, grinds, and pulls be the best!
Top

Just got a a PL62-T model a few weeks ago from 1st line. Im using it with a Lido E, and so far I have been very impressed with this machine. My shot quality has improved dramatically. The previous machine I had was an early 90s La Pavioni Pro, and I don't think I really knew what I was doing with it. The Mara has made trouble shooting a lot easier.

I am hoping to add some thermometry to the E61, I purchased Erics thermometer from 1st line, but it wouldn't fit in the E61 hole, and I ended up stripping the threads so bad it became unusable (this was entirely my fault). Does anyone know if the Vidastech thermometer (https://www.amazon.com/Vidastech-Group- ... B07G72C6YG) will fit the group for the Mara? Or do I just need to get access to a lathe.

Also if anyone has tips on steaming with the Mara they would be greatly appreciated. I usually steam ~100ml for a cap and moving up form the weak steam of the La Pavoni to the Mara has been a struggle.

maybe it's not actually Erics thermometer. Could have also been user error.
Top

That makes sense, my bad for falsely discounting Eric's thermometer. Did you buy your thermometer somewhere or make it?
Top
← Back •
By accessing this site, you agree to the site's terms of service. If you need help with the site, please contact us.