Need help with equipment usage or want to share your latest discovery?
← Back to Espresso Machines • 28 posts •

I'm a recent inductee into the world of HX coffee machines. One of the main reasons I made the leap from my single boiler Gaggia was the promise of abundant and instantaneous steam. Now that I've gotten what I wished for I've been working on producing microfoam. It looked easy enough, I read the milk frothing guide and milk texturing basics, it should be a piece of cake...

The OEM steam tip that comes with the Diadema Jnr (La Valentina) isn't bad at all, but perhaps more suited to larger volumes of milk than I commonly use. After doing a little online research I came to the conclusion that I needed the Gold Pro 2 Hole Steam Wand Tip (GP2). The tip arrived in the mail yesterday. It really does make a difference. I'm still new to HX steam power but steaming with the GP2 is like steaming in slow motion. The standard two hole tip, as previously mentioned, is a bit overwhelming with smaller volumes of milk. It has a kind of violence to its action, whereas the GP2 is smooth and you feel as though you can take your time stretching the milk and finding an optimum wand position.

The second time I used it I managed to produce my glossiest milk ever. MMM shiney

. It looked like 'white chrome' rather than beaten egg whites, and whilst my milk pouring skills are still in their embryonic stages, I did manage one of my best rosettas to date.

I had a little trouble fitting the tip to the wand. It didn't want to screw completely on, and was leaking some steam at the juncture of the tip and the wand. I bought some plumbers tape tonight and that seems to have done the trick.

At this stage (early) I'd think about putting the OEM tip back on if I wanted to steam more than about 250mls just to get a stronger whirlpool, but I haven't steamed enough milk yet to know for sure. The other variable has been the different milks I've been trying. Give me a week or so with the new tip and I'll have a better understanding of it's nuances.

I wouldn't have thought such an easy and inexpensive accessory could make such a difference to my coffee making experience. I'm glad I was wrong.
Top

Thanks Stephen for the quick review. Getting the right velocity and volume for a given serving size makes a big difference in the ease with which you produce a good result. And ever the experimenter, I've tried quite a few steam tips. Below is a sample from a photo I took awhile back:

Since this photo was taken, I also bought the one from espressoparts.com: 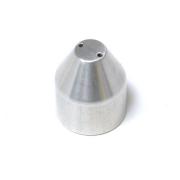 The Chris' two-hole steam tip (link) has been my longtime favorite for Valentina, with the EPNW two-hole a close second. While I don't advocate chasing after steam tips -- I advise getting your technique down with just about any reasonable steam tip -- I'll make an exception to that advice for the GP2. I like it just a little more than the C2HST.

I talked with Jim at 1st-line and complimented him on a nice improvement on a small but important part of the cappuccino making experience. Later I cajoled him into letting me pass a few of these wonders onto the HB readership. HB is about sharing the love.

Well, they arrived today. Anyone who wants one, send me a private message. I'll update this post when they're gone. In return, please post your impressions, whether they be positive or negative.

PS: This is a photo of the GP2 next to the stock tip for Valentina.

Updated: All GP2's are spoken for! Look for them in the next few days, and thanks for your feedback.
Dan Kehn
Top

Is the 'New Std' the tip that now comes OEM with the La Valentina?

If so, are they readily available?

This bit of tip info had slipped by me.
Top

Sorry, that's a photo from quite awhile ago; "new std" refers to the Isomac line. To the best of my knowledge, stock Valentinas come with the leftmost tip, i.e., "old std." You could probably acquire the knurled steam tip from a parts supplier for Isomac. If I recall correctly, it steams like the EPNW two-hole steam tip.
Dan Kehn
Top

A local roaster and general coffee supplies retailer had mentioned that Ala di Vittoria were shipping the Valentinas with smaller gauge holes due to consumer feedback. Not something I can confirm, but no reason not to believe it.
Top

Hey dan, What do you think of a 4 hole tip on La Valentina?

I'd kinda like to try out a steam tip that will put every bit of her steam at my fingertips, that would give me the fastest possible steaming time and the most difficult learning curve, either as something to take the time and learn or as something to compare to the GP2HST. Any idea where I could get something like that? you don't happen to have a spare one lying around, do you?
Top

I doubt you would be pleased with the performance of a four-hole steam tip for Valentina -- the pressure and steam velocity would likely plummet, resulting in lots of soap bubbles. The steaming performance section of the Cimbali Junior buyer's guide explains the conundrum:


The ease of frothing isn't related to a single physical metric like boiler size or heating element wattage. The balanced combination of steam volume, velocity, and the steam tip dispersion pattern tells more about how easily the machine froths and dictates the techniques that will work best. Very often new owners who are frustrated by their recently upgraded espresso machine actually suffer from continuing the habits they learned on their previous less powerful machine.

In any case, you've not even received your new Levetta, have you? The stock one works pretty well for a 20 ounce pitcher and the GP2 works great for small amounts. Give both a try. To make the tip easy to swap out for experimentation, use a small O-ring to get a good seal and only finger tighten.
Dan Kehn
Top

HB wrote:I doubt you would be pleased with the performance of a four-hole steam tip for Valentina -- the pressure and steam velocity would likely plummet, resulting in lots of soap bubbles. The steaming performance section of the Cimbali Junior buyer's guide explains the conundrum:
...
In any case, you've not even received your new Levetta, have you? The stock one works pretty well for a 20 ounce pitcher and the GP2 works great for small amounts. Give both a try. To make the tip easy to swap out for experimentation, use a small O-ring to get a good seal and only finger tighten.

I suppose a better question might be to ask, do you think that the power of the boiler is optimally used by the stock/GP2 tips? I was under the impression that a lot of these harness the steaming power to slow things down.

In any event, I certainly haven't had a chance to play around with the stock or gold pro tip; I just thought it might be interesting to test out a bigger tip and compare; I suppose I probably will have enough to work with just with the stock and gold pro.
Top

Yes, the stock tip and GP2 cover the capacity of Valentina's boiler well. For example, if you could put the four-hole tip of the Cimbali Junior on Valentina, the boiler pressure would fall like a stone. If you tried to compensate by choking down the steam valve, the velocity would be as anemic as blowing milk bubbles through a straw. Not enough pressure = no microfoam. It is hard to steam below 0.8 bar and approaching impossible at 0.6 bar.

PS: Now you got me wondering how bad it would really be. Fortunately Junior and Val aren't thread compatible...