Need help with equipment usage or want to share your latest discovery?
← Back to Espresso Machines • 43 posts •

If you obsess about shot temperatures, you will probably ultimately buy a Scace Device, and once you buy one of those you will need a datalogger to record the temperatures obtained. There are 3 serious choices I'm aware of for dataloggers; the Fluke 54 series, the Omega HH506RA, and Picotech TC-08. The Picotech costs the most, has 8 channels (overkill for most), has no screen for realtime viewing, and must be connected to a computer via USB port to view shot temperatures. The Fluke and the Omega function both as self-contained handhelds with LCD screens, and log the temps obtained in memory. The Fluke 54-II is very well constructed, operates intuitively, but costs twice as much as the Omega which is less well put together, somewhat harder to use, but comes with very basic software which allows downloading of the data obtained via either serial or USB (extra cost) ports. The fluke has such software available for purchase at the absurd price of around $150, making the Omega about 1/3rd the total cost of the Fluke if you want to download data directly without having to manually type it in.

Don't ask me why, but I currently own both the Fluke 54-II and the Omega HH506RA. Both are dual channel dataloggers, although only one channel is needed for use with the Scace. Given the huge price differential between these two units, I thought it would be useful to compare the two units in actual usage, with the Scace, to determine whether they were equivalent. The short answer is, they are.

The testbed was my modified Cimbali Junior D1 Rotary machine with PID and delay timer induced 6 second 3.5bar preinfusion. The actual data obtained is not important as we are comparing the performance of the dataloggers, not the espresso machine. I arbitrarily decided to use a boiler temperature of 230.5F, which I've previously found to produce shot temperatures within the range often recommended for espresso extraction. You will see in these curves that the consecutive shot series produces a declining temperature profile from shot to shot that stabilizes a couple of degrees lower than the every 10 minute (or longer) random walk-up shots. If the goal was to produce stable shot temperatures then one would want to extend the interval between shots slightly. Once again, however, the idea was to evaluate the dataloggers and not the espresso machine so we are looking at how similar the shot temperature curves are with the two dataloggers, not comparing the espresso machine's operation in two different scenarios.

First, here are consecutive shot series plots from the machine using both dataloggers: 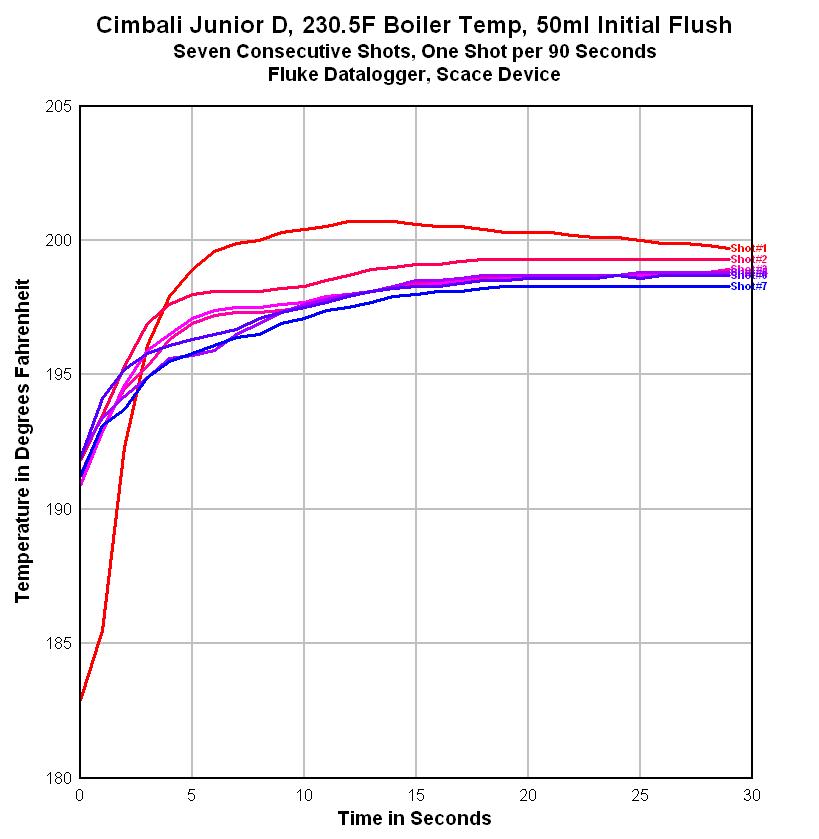 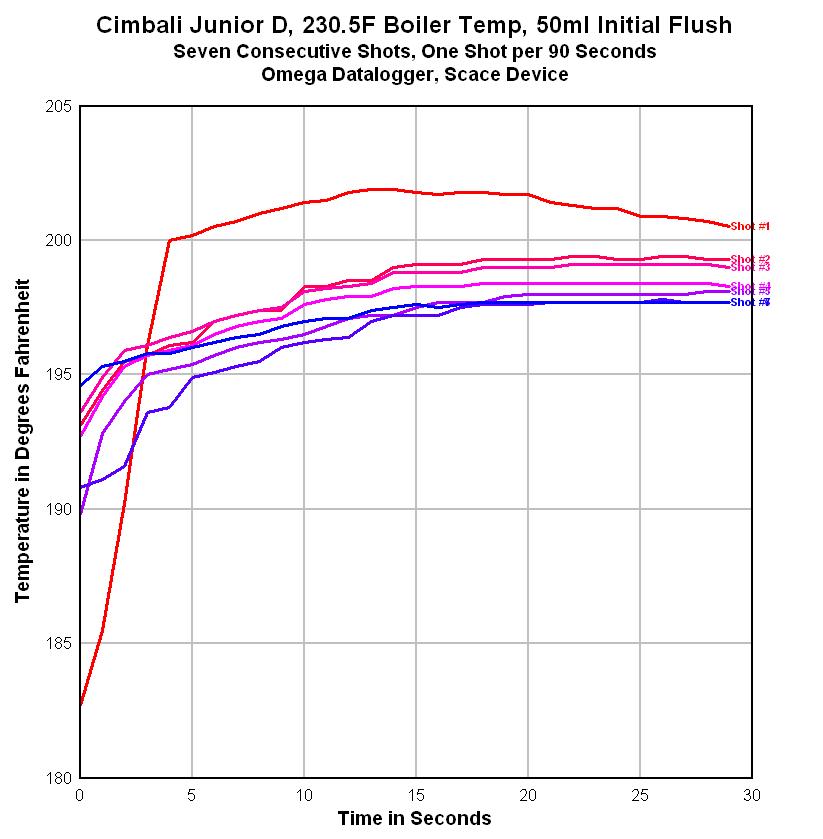 And here we have the walk-up shots series as captured by the two dataloggers: 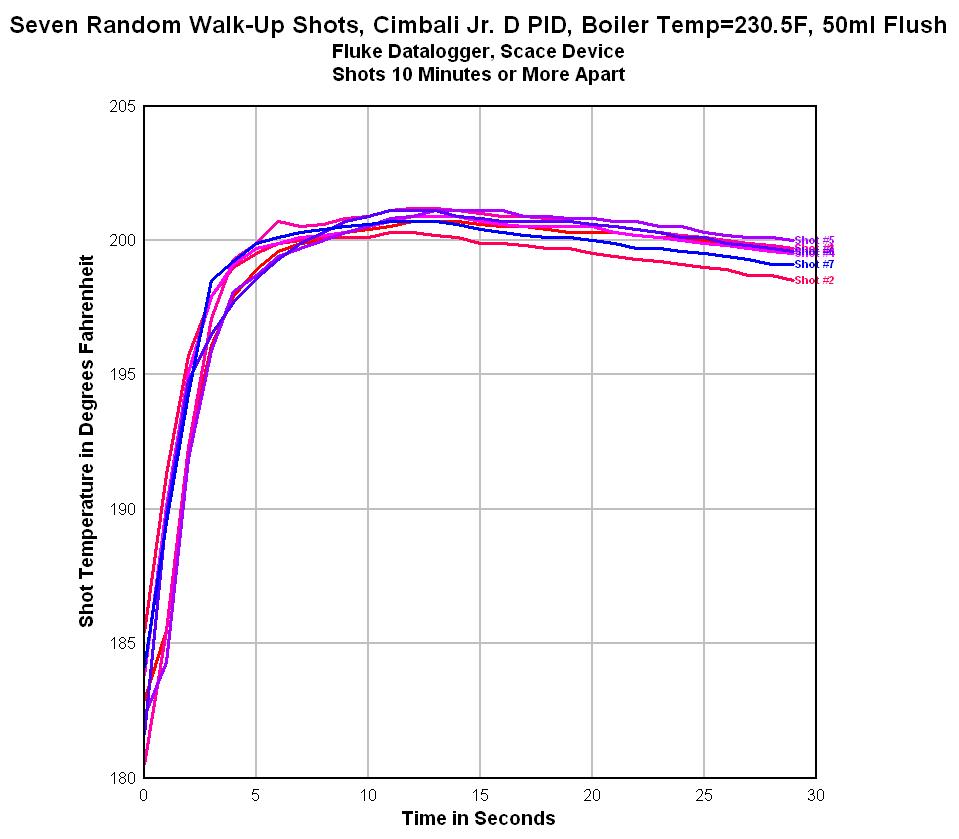 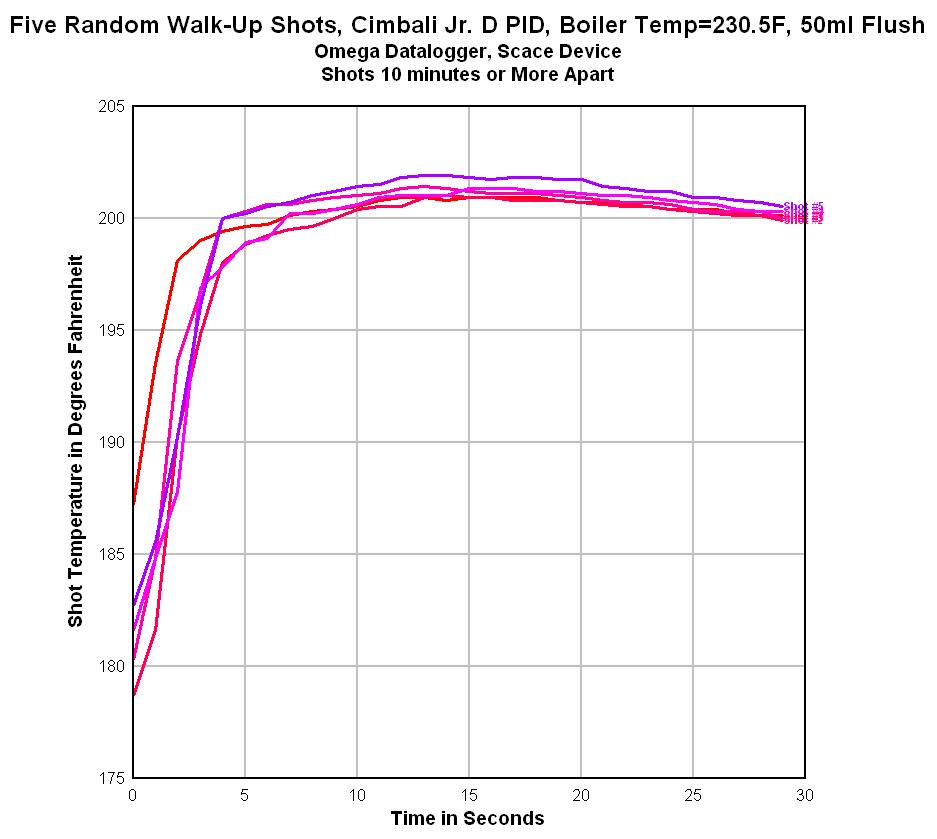 Having now used both dataloggers extensively, both with the Scace Device and with my roaster, the Fluke wins hands down for usability and ability to work with it as a handheld device, both while recording data and for review afterwards. As for ease of transfer of data for further use, e.g. plotting into a graph or entering into a spreadsheet or statistical analysis, stuff like that, the Omega wins by virtue of the ability to download the data without either paying $150 for some overpriced software or having to type the data in manually.

The best bang for the buck is clearly in the Omega; the most fun datalogger to use is the Fluke. Consult your bank account and make your choice

p.s. this is crossposted on alt.coffee; please respond in one thread or the other but not both
What, me worry?

Firstly, thanks for posting the comparison between these two fine temperature measuring instruments. The Omega HH506RA is made in China to (I would think) Omega specifications. Another noteworthy temperature instrument company, Extech, distributes a HH506RA look-a-like (or vice-versa):

The Extech model, IIRC, sells for about $15 more than the Omega but has one additional feature (that I can't recall now) and the instruction manual has, at least, been proofread. Software for the HH506RA, including the "instruction" manual is always available on the Omega FTP site:

Omega told me that the HH506RA "instruction" manual was in the product improvement pipeline as it well deserves. How I wish they would do the same for the POS data acquisition software! Have you tried using the Omega cable & software with the Fluke 54II or is the meter connection not compatible?

Looking at the Extech data sheet online, the model appears identical to the Omega, as does the POS software. The Extech data sheet doesn't appear to reference the USB connection option, which is what I have been using. Whether this is because they don't sell that cable or that it appears elsewhere, I don't know. It looks like the mfr. of this meter makes both the meter and the software.

The only thing I know about the Fluke 54II data transfer is that it occurs via infrared. I don't see any ports on the 54II for plugging in a cable; if they exist one needs to remove the plastic yellow protective boot, which I doubt since that would make the boot more or less useless. I think the data transfer with the fluke is with that old IR technology directly to a PC, which has largely been obsoleted by bluetooth. When I got the Fluke I did try to get a couple of my computers with that sort of IR to recognize the Fluke but they could not locate it. Since the Omega uses a proprietary cable for which there is no connection on the Fluke, I don't see anyway to use the Omega software with the Fluke.

I have had some problems with tennis elbow on my right arm (I don't play tennis) which dates from some work I was doing on my espresso machine and use of my computer, especially the mouse. Having to type in a whole bunch of numbers into a spreadsheet or graphing program makes this problem worse so being able to download the data is well worth it to me.

As I was bumbling my way around the Omega website looking for the HH506RA data logger, I stumbled across the NEW HH306 series. It is priced $40 higher than the 506, only does K type thermocouples but appears to have the ability to log 16,000 records versus 1024. It also talked to the tech support guys at Omega and they said the HH-306 software works and the 506 is "hit and miss". There is also a HH-309 which is 4 channel. Anyone have any experience with either of these devices?

Slightly off-topic question I hope someone can answer: Fluke makes 53-2 model, which is supposed to be the same as 54-2 but with a single input. Is there any reason to choose more expensive 54 over 53?
Top

It's handy if you want to compare different temperatures simultaneously. For example, from Monitoring Brew Temperature - E61 & Silvia:


HB wrote:The prior chart only showed thermofilter readings. Below is an example of the two location readings shown together. To demonstrate the attenuating effect of the group, the adapter reading was taken from the bottom of the well (nearer the HX exit), not turn "D" as Eric's instructions suggest.


Temperature within the valve chamber exit (blue) versus thermofilter (red)

But it's not a "must have" feature.
Dan Kehn
Top

Sponsored by Urnex - 100% dedicated focus on coffee and tea cleaning

I think it is false economy to get the 1 channel model.

You will be surprised what you come up with to monitor once you own the thing and the incremental cost of two channels is about $50 if memory serves. I've used 2 channels simultaneously for monitoring roasts in my roaster, and even when I'm only monitoring 1 thing at a time, if I end up inputting a lot of data that I only take off later, it is possible to input one cycle's worth of tests into the T1 channel, another's into the T2's channel, and still be able to tell which is which afterwards. Another example would be when I have done consecutive shot series at one boiler temperature as well as walk up shots, using the Scace Device. If I put the consecutive shots onto channel 1 and then the walk up shots into channel 2, I'm not obligated to take the data off of the device until it is convenient to do so, since I know which shots are which even after the fact.

Another data logger with software is the Extech 421590 http://www.extech.com/instrument/produc ... 21509.html, about $150US
Comes with Windoze software.

Another is BK 715 http://www.bkprecision.com/www/np_specs.asp?m=715
Software extra.

Not used either, but found while browsing.

If using a laptop, the number of data points is irrelevant, as one can log the data to the PC until the batteries give out.
Top

jimr wrote:As I was bumbling my way around the Omega website looking for the HH506RA data logger, I stumbled across the NEW HH306 series. It is priced $40 higher than the 506, only does K type thermocouples but appears to have the ability to log 16,000 records versus 1024. It also talked to the tech support guys at Omega and they said the HH-306 software works and the 506 is "hit and miss". There is also a HH-309 which is 4 channel. Anyone have any experience with either of these devices?

This is made by Centertek in Taiwan. An outfit called Omni Instruments sells the 2 and 4 channel models for less than Omega:
http://store.omniinstruments.net/omnidaq4t.htm

I have the four channel model, and it is very intuitive to use. The software is excellent for a freebie, but serious work will require porting the data from it to a spreadsheet or stats program. This is also easy.

It has two major drawbacks:
1. K type thermocouples only, e.g. will not work on a Scace unless you use a formula to convert the logged readings
2. It's very slow. While it will log 1 reading per second, it only updates every 2.5 seconds. I don't mind, since there will be no dramatic deviations from a straightline between two readings 2.5 seconds apart in an espresso shot. Moreover, I use it primarily for roast logging. However, some may find this a total pita.

I've decided to use only K-type TCs, since they cover all the temperatures that interest me, are waterproof, and come preassembled in every configuration possible. I don't need the added accuracy for my espresso machine, it's not nearly as stable as Ken's

As you see, using a fake scace consisting of a single basket with all but one holes blocked, the graphics aren't nearly as pretty as Ken's: 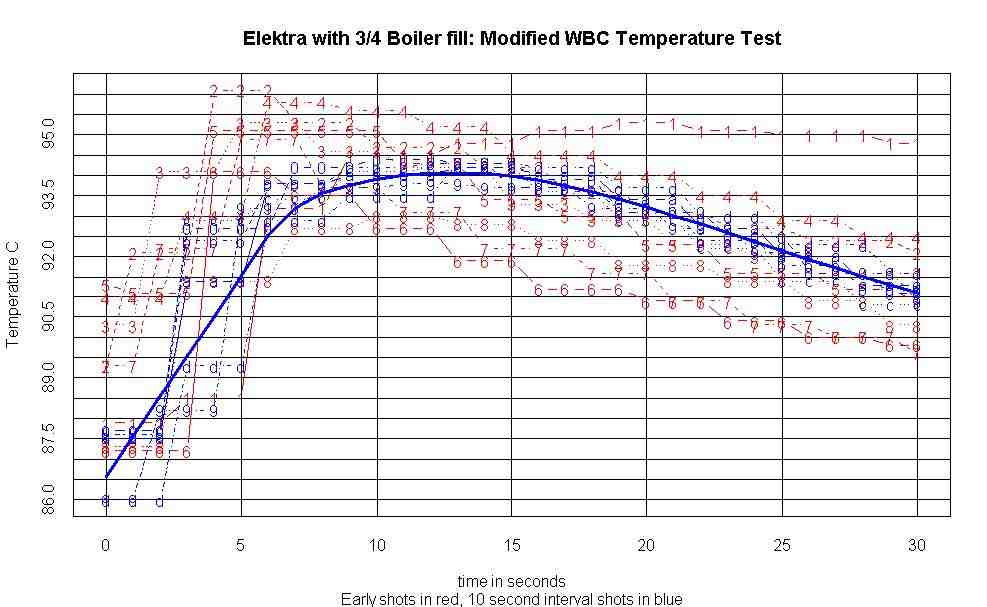