HB wrote:The best I found was straight from the owner's manual

I bet I spent 20 minutes doing an internet search for a diagram like that. Dan the man, what else can I say!

malachi wrote:
This is something of great interest to me.
I've noticed that a ton, in fact possibly the majority, of home E61 machines have equal diameter tubes. This seems to be a serious (perhaps even fatal) flaw.

It takes time and money to tune a system properly, and that tuning will change with configuration.

I agree that it is a flaw of home E61 designs and most likely many commercial designs also; but when a manufacturer is trying to stay in business on low production volumes as seen in this market, it doesn't surprise me that they just slap in tubing that is "close" and send it to market.

Analog system design is not a common skill found in the modern industrial base anymore, with increased reliance on digital controls to counter basic design deficiencies I wouldn't count on seeing any elegant system design practices anytime soon.

The whole concept of digital control is not a bad thing either...we all love our 1/32 DIN PID controllers and many times It can take a marginal system and make it world-class with little time invested.

malachi wrote:This is something of great interest to me.
I've noticed that a ton, in fact possibly the majority, of home E61 machines have equal diameter tubes.

Indeed, all the ones I've seen are equal diameter too, though the lengths vary considerably. Referring to the differing diameters, I was thinking of flow restrictors mentioned earlier. BTW, if you really want some good brain hurt on this subject, check out Greg Scace's Results from real time measurements of e-61group temperature and More tuning of thermosyphon groups. They go into a lot more detail.
Dan Kehn
Top

Dan, how is the e61 commercial restrictor different from a gicleur?
LMWDP #0000016 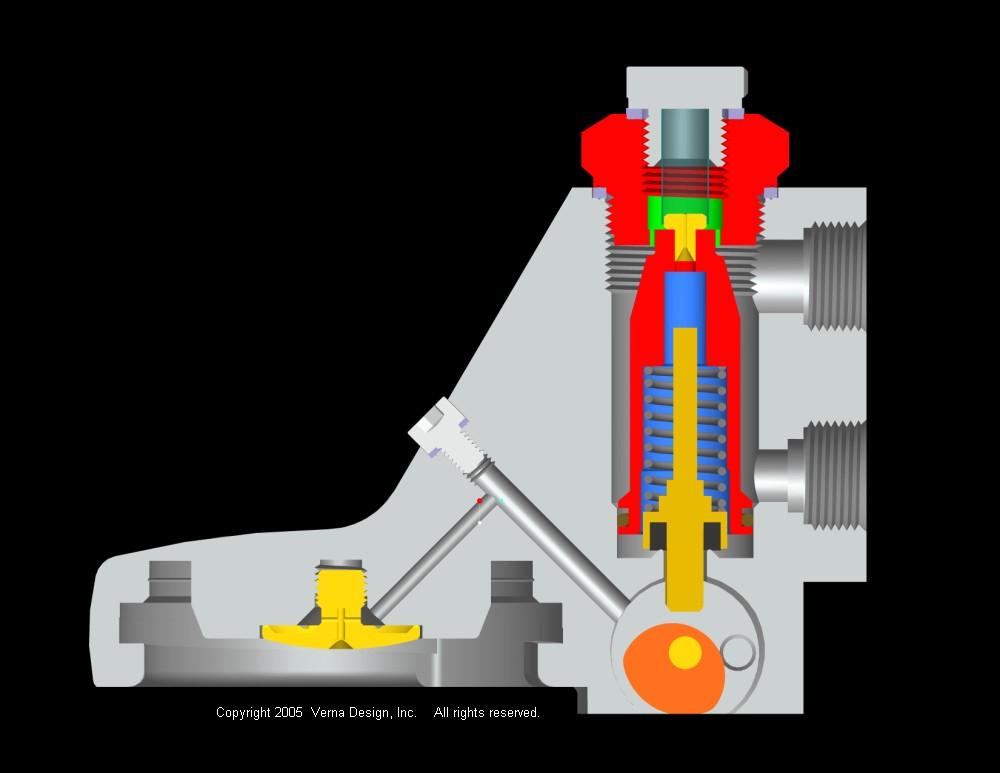 Courtesy of Verna Design (please do not copy)

As you can see, the gicleur gates the water's entry into the brew chamber (blue). Tweaking the size of its inlet allows for slower pressure ramp-up. The thermosyphon restrictor on the Legend has a completely different purpose: To control the speed with which water circulates. It is installed along the pathway of the "blue" (return) arrow shown earlier.

It's not rocket science once you have a clear diagram. Many thanks Lino.

- The E61 group is not a "saturated group."
- Having an E61 style group does not guarantee that your machine offers pre-infusion.
"Taste is the only morality." -- John Ruskin
Top

malachi wrote:The E61 does not "run hot". Many people take the phrase "cooling flush" to mean that the group is hotter than the target brew temp and must be cooled by running brew water through it. This is not the case. On HX machines, you do need to flush to cool your brew water - but what you are cooling is the heat exchanger, not the group head. The group, in fact, runs cool and the initial flush will actually serve to not only cool your brew water but also to heat your group.

Up until a month or so ago, I would have agreed with your statement. However, after installing a TC probe in my E61 group directly below the dispersion screw, I have actually found that the group does in fact run hot (at least on my machine). After the machine has been idle for some time (15 + minutes), my TC probe reads 225 F). Unlike some others that have installed their E61 probes in the easily accessible E61 bolt location, my probe is not affected by water inside the HX. It's location is not saturated with water unless the pump is engaged, so the TC probe is only be affected by the heat of the actual group itself.

See my post on CG that chronicled my science project. There are several pictures in that topic that show the actual location of the probe.

I do agree that the water in the HX is much higher than proper brew temps, but it would also appear that the group itself is overheated by this idle water as well.
Sean
Top
← Back •
By accessing this site, you agree to the site's terms of service. If you need help with the site, please contact us.