Need help with equipment usage or want to share your latest discovery?
← Back to Espresso Machines • 48 posts •

Paul Monaghan (HAL9000) sent me the image below of the Faema "no stop" group and an (imperfectly translated) excerpt that explains its function.


As already written, the delivery group is kept at the right temperature for the delivery of the coffee by means of a thermosiphon circulation. Inside of the group there are three valves:

The group is controlled by means of a little lever, which must be brought from the rest position to the working one (in the semiautomatic machine) or by means of a push button (3) in the case of the automatic one. In this moment, the delivery valve (72) will be closed and the infusion (73) as well as the drain (74) valves will be closed.

During the first 5-6", if the grinding is correct, no coffee is getting out from the spouts, in as much as the hot water is getting in touch with the ground coffee in the filter, but can't flow through because at the beginning the pressure isn't sufficient to win its resistance. The raise of the pressure on the ground coffee is delayed, because of the fact that there is a 0,7mm nozzle, which allows a flow of 10-14cm cubed/sec. of water with a pressure of 9Atm. and an infusion valve together with the infusion chamber below.

At the beginning, just after the group has been commanded, the spaces over the ground coffee are empty and this gives a delay in the pressure raise; as soon as these spaces are filled, the infusion valve opens automatically (roughly at 1,5 bar), giving thus a further delay, necessary for the filing of the infusion chamber, below the valve.

A good infusion can be obtained only with the right grinding of the coffee.

Once the infusion period has been finished (5-6"), begins the delivery of the coffee, which in the half-automatic will be finished by the manual return of the lever to the rest position and in the automatic by the automatic unhooking of the push button. At the end of the delivery, the opening of the infusion and of the drain valves, assures the release of the pressure from the filter holder, so that it can be unhooked without the peril that the dregs explode and hurt the operator.

Paul remarked that the above suggests that preinfusion can be amply explained as "the hot water ... getting in touch with the ground coffee." I like the last line about "exploding dregs" too. 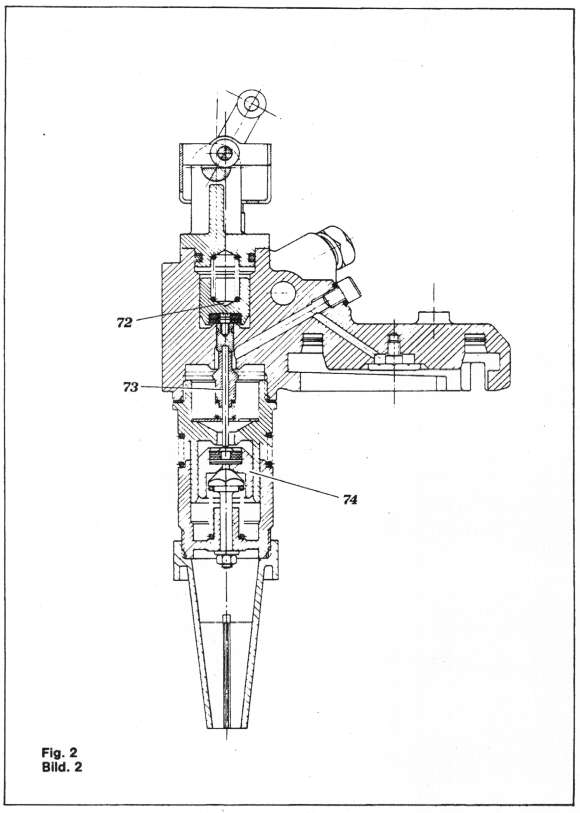 EDIT: Just found many discussions on this apparently famous screw. Sorry for the trouble!
Thanks for posting that Dan.

Looking at the diagram, the water path to the filter basket seems to end in two "tubes" - one leading upward at roughly 45 degrees from the horizontal, then the other leading back down at a similar angle into the filter housing.

At the end of the "upward" tube there is a small allen head plug. I can't think of any reason for this to be there except to plug a hole that exists as a manufacturing artifact. Does it serve any other purpose?

If not, has anyone used that hole to place a TC in the group? It looks like a good location to me, especially if you could snake the TC down into that other tube and fix it in the plug in such a way to handle brew pressure.

Where an improperly jetted E61 can heat soak after sitting, a LM can lose temperature as there is no effective way for the heat to move through the saturated group. It must conduct heat energy through the water and brass (or SS) in a static fashion by convection. You could make a case for 'ocean thermal gradients' I suppose, but it tends not to work so well in this model.

Older GS groups pulled the water through a jet (sort of) at the base of the boiler, and I understand that this was a better design. I am putting mine together after the first of the year and will take a look. Going to hot rod it, PID, SSR for the steam boiler, trick body, blah, blah blah.

Also, the PI on the E61 doesn't require line pressure to work, it uses the upper spring loaded chamber as a pressure regulator--line pressure may throw off the timing and extraction if not sufficient to open the PI regulating valve.

Also, many companies (not just cheap Spanish knockoffs, which aren't so cheap anymore) have returned to the e61 design. Machining costs are not significantly different between designs as the process is largely automated. The real cost is the material and the finish required. E61 groups are still more expensive than many other traditional groups, especially the manual design.

These include Wega, ECM, Brasilia, Iberital, Expobar, Faema (again), Futurmat, VBM, Pavoni (a few years ago) plus a cast of thousands of upper end home machines. These are current production machines using this group. It has more mass than a saturated group (LM) and, I believe, is more reliable. The people I know who have put these machines side by side, are universally surprised at how much better the E61 performs. At least on commercial products.

Is Oscar really not a thermosyphon machine? I own one and am under the impression it is, in part due to the two pipes from the group that seem to connect to the HX. What would be the purpose of the second pipe if not thermosyphon circulation?

mteahan wrote:Also, the PI on the E61 doesn't require line pressure to work, it uses the upper spring loaded chamber as a pressure regulator--line pressure may throw off the timing and extraction if not sufficient to open the PI regulating valve.

I was under the impression that preinfusion occurs under pump pressure rather than line pressure because the pump is running during PI, but that that pressure is not felt in full force at the puck because, first, the airspace over the coffee must be filled with water and, second, the preinfusion chamber must be filled with water. Only then is the full pump pressure applied everywhere in the brewpath, and the coffee flows from the puck because that has become the path of least resistance. All of which makes me think that pump pressure, not line pressure (and a puck ground and/or tamped to be able to withstand more pressure than the pre-infusion valve), is what is important in timing the opening of the pre-infusion valve.

If not, how could line pressure throw off the timing?

Thanks as always,
Paul
Top

Lets say the spring pressure for the PI chamber is set to 20 pounds and your line pressure, perhaps because of a limiting device, is set to 25 pound. The 5 pound differential may be enough to open the valve, but it would also preinfuse the puck and the chamber may be significantly delayed in filling, elongating the PI time cycle. Pump based PI systems (delays) are more predictable when no mechanical PI device is in place. A spring loaded PI chamber ala ECM or Gradisca, ramps up pressure as it extends, but may not extend quickly enough under low line pressure.

The PI systems on E61 heads are designed for full pressure operation, with the ramp and duration assisted by the flow rate set with the jet. PI systems on the old Marzocco GS were pump delay systems like the Synesso. Multiple heads could not be PI'd unless simultaneously done. Which was almost impossible.

The PI simply reduces the initial extraction pressure while the brew temp is elevated and allows for a seamless transition to full pressure once the thermo compensation effect kicks in.
Michael Teahan
analogue | coffee
Top

HB wrote:Lino spent hours measuring his E61 group to input it into his CAD program. Below is one example: 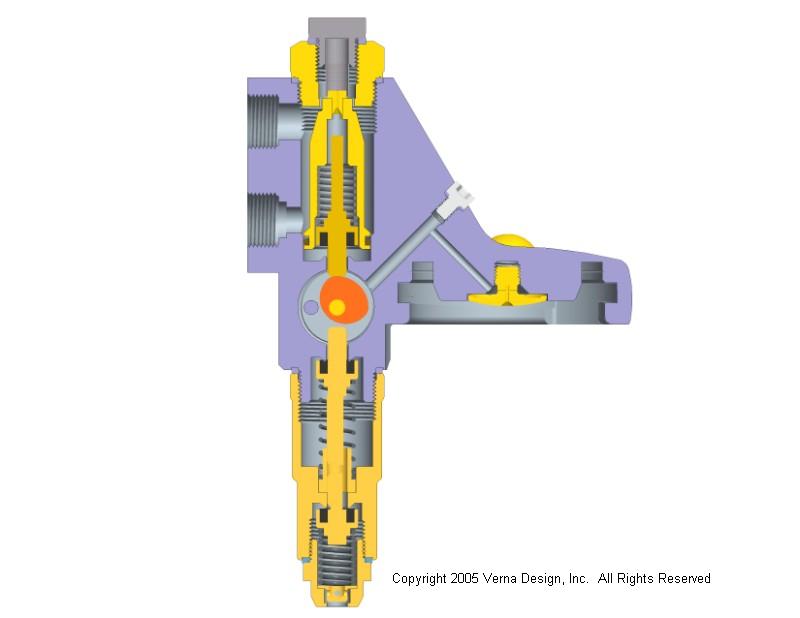 He and I are collaborating on an article to explain in layman's terms how this works. He's working on an animation too. Very cool Lino, thanks! For more pictures, see E61 Group Espresso Machine: Detailed Interior Schematics.

Some might already have noticed that the animation is gone. I posted the link by permission but the site the animation was running on is out of business and Frank (the owner of the animation) does not have a backup copy

If we manage to find someone who has a copy of the animation Frank agreed that (HB's approval provided) we can put it on Home-Barista. This also applies to the animation of the Solenoid (3-way) valve that was running on the same site.

Check the link - if you see an animation you have a cached copy. In this case please PM me.

Yes, you guessed, time for an upgrade..or is it?

I have been toying around my LaPavoniPro long into my second year now, upgraded the grinder a few times, some minor & MAJOR tweaking of the machine itself, i now roast my own beans, i built a HUGE roaster from a rotisserie style(with the rotating grill-stick inside) oven, i can easily roast 2 - 2,5 pounds of beans in one batch(havent tried bigger batches, oh yes, there is room), i adjust my grinder according to the humidity, learned to use the bathroom scale under the machine etc.


The coffee is now just so GOOD that i have been wondering why i should get a HX/E61 machine?(other than the fact that i just would WANT one..)

I get thicker crema, better mouthfeel, better overall tasting espresso than i have had basically anywhere(small coffeeshops with real baristas working E61 machines), i do not remember when was the last time i had that "Wow, this tastes excellent!" feeling(except my own home)


From what i heard the E61 machines are more reliable to return constant high-quality espresso without "much" effort, obviously i am willing to put alot of effort in learning the trade but would a E61 help me that much more? Would the coffee be THAT MUCH better? Is it really better than anything?

Yes, i have tried some E61 machines and was not that impressed but to make a real opinion i would have to buy one or lend one for a month or so to get see some results.
Top


j7on wrote:From what i heard the E61 machines are more reliable to return constant high-quality espresso without "much" effort, obviously i am willing to put alot of effort in learning the trade but would a E61 help me that much more? Would the coffee be THAT MUCH better? Is it really better than anything?

Steve is a long-time La Pavoni owner and has borrowed espresso machines I've reviewed from time-to-time, including an E61. He commented that they were easier, and the crema "so thick you could stand a spoon in it," but he wasn't the least bit tempted to change. I would be interested in hearing your thoughts after a month with any of the E61 espresso machines reviewed on this site.

In my opinion, the E61 isn't "better than anything," but it is popular and well priced.
Dan Kehn
Top
← Back • 48 posts •
Sponsored by La Marzocco · Home