HB wrote:Pointer to a recent related discussion in coffeed.com, including an exchange on the "Cannonfodder Device" (page 2).

Wow, I honestly never thought this would get more than a glance for curiosity. Let alone discussed on other forums or have it dubbed the "Cannonfodder device".

That other PF device looks good. If I was in the business, dropping $300 on that device to fine tune my commercial machine would be fine. However, your average Joe is not going to spend $300 on a temp basket (at least I cannot afford that

I have told everyone that has emailed me, and posted in a thread or two where it was mentioned, that this is a digital thermometer, not a thermocouple. As such, it should not be relied on as an accurate test device. It is intended to give you a way of achieving a repeatable temperature range on your average Joe's budget. My time is free and I prefer to spend it making something useful over sitting on the couch watching TV. Regardless of whether the display shows 201 but the water temp is actually 199, you still get a repeatable baseline to work from. Now if you wanted to do thermal testing for analysis, don't use this, get the Scace device, it has the accuracy needed and is of a much better and sounder design. Just pop it into any naked PF and away you go. One is for the average Joe, the other for professionals that truly need half degree accuracy to fine tune their equipment.

I've been waiting for you to make me one <g>.

I'd be so excited - one more aspect of making espresso that I've got control over - the mysterious 'WHAT is the brew temp in my machine?'

Seriously, I showed my SO, who is handy, has lots of tools and just redesigned and rebuilt our roof singlehandedly (as well as hand raised a kitten, he is a renaissance man) your instructions and he wasn't confident he could reproduce them without wasting a few probes during the cutting process. This is a man who solders things on a regular basis. The brazing bit had him unsure too.

Maybe I'll get him to try it this winter when he is bored and has no projects, but I'm telling you Dave... You could send your kid to college making these things and selling 'em. Or be in beans forever.
Or at least be known in all fancy home machine circles for all time as 'The Man Who Conquered E61 Temp."

Ann
who is positive her espresso would be world class if she just knew what temp she was making it at...
Top

I am actually working on getting a fitting that would eliminate the need to drill/braze a bolt. The problem is the male end is metric. If I lived in the UK I could probably get one relatively easy. But living here in the good old USA, no one in my town has them in metric. I had to special order the fitting and it has an eight week delivery window. ETA is around 8-30. If one of them fits, and that is a big if, they will be a breeze to make. Unfortunately, if one does fit, it will take another eight weeks to a bag full.

I will be able to make them with either a thermometer or a thermocouple. The later being much more accurate but a bit more expensive, especially if you do not have a meter to plug the TC into, the base model Fluke is about $180, but there are other options.

Don't think that I did not have a few 'oops' myself. The first bolt I drilled was a hare off center and breached the grooves on the bolt. The first thermometer was sacrificed to the electronic gods. When you release the blue smoke of mystery from an electronic device it is a bad sign.

I would encourage him to give it a try. Worst case, you waste a couple hours of you life and $20 in parts, that is unless you set the garage on fire with the acetylene torch.
Top

I made the same device following Dave's direction. I was fortunate enough to have access to a machineshop/machinist who drilled the hex bolt for me. I did the cutting w/ a dremel tool and it was actually quite easy. As for brazing, I took the easy way out and use JBWeld instead. JBWeld is quite easy to use and the temperature rating is well above the operation temp. Strength should not be an issue too. So far, no leak yet. I would encourage ppl of using it as alternative to brazing since it's much easier and achieve more or less the same result. This little device, despite its accuracy (or there lack of) and reading lag, has helped me in making GOOD espresso tremendously. It's one of the best thing I did to my machine.


annp wrote:I've been waiting for you to make me one <g>.

This is a man who solders things on a regular basis. The brazing bit had him unsure too.

I never thought about using JBWeld. The only concern I would have would be it leaching any chemicals into the water, but that is a good idea.

Keep in mind that there are many grades of thermometers out there, some are better than others. You want one with the quickest reaction time, and smallest percentage of error. It is not exact but like I said, it helps develop a baseline. Now with a TC, you would get very accurate and responsive results but at the cost of going from a $20 to $200 solution.
Top

I agree. It's nothing but a tool to establish a "meter" for me to fine tune the pull. Afterall, taste is the king.

As for JBWeld, I did research into that and it's foodsafe (info from both the manufactuer and end-users). Ppl use it on homebrewing broilers and such. I believe someone else on CG (AndyS.) also tried a similar device, but uses a actual thermocouple probe instead of the thermometer. He also uses JBWeld.
Top

I actually got the 'inspiration' from the forums here at HB. I had posted a question about the Allen screw on the brew head. I am sure there are other people out there that have tried the same thing. The one mentioned in the thread was solder welded in place. I had brazing rods and a torch already, so that is what I used.

If anyone else has photos or descriptions of what/how they created theirs, please speak up. The larger the knowledge base the better.
Top

Hi all, H-B Freshman here . . .
I'm not a Newbie to the "Product of the Bean," but I guess I'm sadistic because I always seem to find new ways to botch it. For espresso I had determined to be a Neverbe. That was then; I tried it myself and Wow!

If you can always obtain fittings of a certain thread standard, you could have a metal fabricator MIG-weld the threaded piece you have and retap it to match the thread on the fitting. He might have to weld, ream and tap it.

cannonfodder wrote:I am actually working on getting a fitting that would eliminate the need to drill/braze a bolt. The problem is the male end is metric. If I lived in the UK I could probably get one relatively easy.

Aug. 30th to get a metric bolt? I can probably source the metric bolts here on the west coast without any lengthy lead times. I don't have a E61 grouphead at hand though (Cimbali /Marzocco at home) to measure the part. If you care to post the bolt specs, I will check on it. As for JB weld, it is used to repair cylinder blocks, so 8 bar is not a problem. It is claimed to be foodsafe, although I would find braising to be a both quicker & easier approach.

It is not just a bolt, it is the entire outfit, bolt, compression fitting. Simply slide a 1/8"od rigid probe housing into it and tighten her up. Then anyone can make one using the probe of their choosing. Nothing mystical, just an omega lock fitting in metric.

I am just a computer guy trying to get a good cup-o-joe and help out any other struggling amateur and have some fun at the same time. 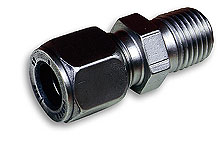