Greg, I assume you won't mind then if I post the pictures you sent me (rescaled)... 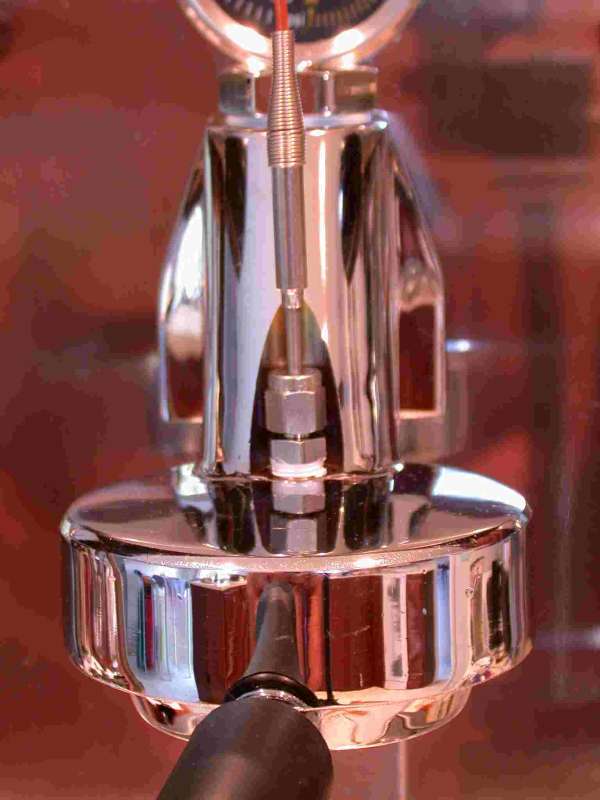 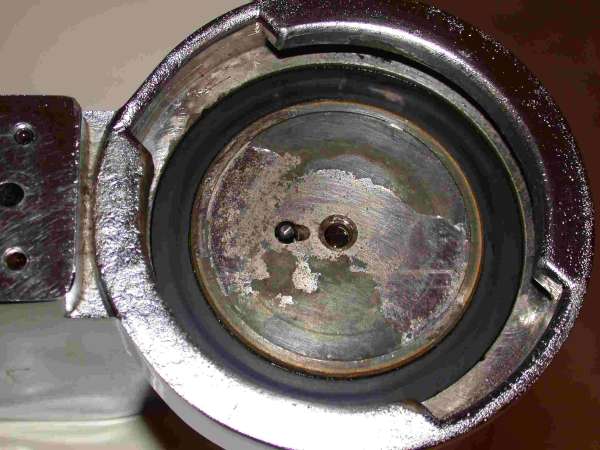 Did you measure the difference between this location and the E61 channel? Obviously the dispersion screen location is more accurate measure of brew temperature, but I am wondering if the channel is good enough for purposes of repeatability.
Dan Kehn
Top

HB wrote:Obviously the dispersion screen location is more accurate measure of brew temperature, but I am wondering if the channel is good enough for purposes of repeatability.

Dan - that is exactly my question. I am less worried about accuracy of actual brew temps as I am with (a) repeatability; and (b) a linear relationship between brew temp (using the mod pictured in your post) and the temp measured at the accessible bolt.

Ideally, I would love to have a probe right at the dispersion screen, but it looks like an infinitely more difficult task than this latest TC screw mod.
Sean
Top

Strugs wrote: Dan - that is exactly my question. I am less worried about accuracy of actual brew temps as I am with (a) repeatability; and (b) a linear relationship between brew temp (using the mod pictured in your post) and the temp measured at the accessible bolt.

Your problem there would be that repeatability will depend on your grouphead temperature as much as the water temperature entering it. When the T/C is in the E61 screw, all you really measure is water temp entering the group head. The group temp, which changes greatly depending on idle time and flush, is unknown to you. You are able to control only half of the equation, and I don't know how helpful that is. Putting it near the dispersion screen is the only way to get repeatability. That one, btw will not give you brew temp either, since flow rate in the puck affects it greatly. But it will give you repeatability with great accuracy.
Abe Carmeli
Top

Hmmm - I see your point, but wouldn't the TC in the E61 screw measure grouphead temp as well as water temp? After all, each one influences the other. Flushing hot water through the group heats the group, flushing cooler water cools it down. A hot group heats the water and a cool group should decrease the corresponding water as if passes through the group. I did some measurements of temps of the grouphead last night and saw a 10 degree (F) spike in the temp of the group (measured at the top of the "mushroom") when I flushed overheated water through the group after the machine had been sitting idle for 30 minutes.

Anyways, since I am far from an expert on thermodynamics, everything I have said may be 100% crapola...
Sean
Top

OK - thanks Abe, that clarifies your point for me.

So the question is: does this unknown variable make enough of a noticeable difference in being able to monitor temps that it is worthwhile drilling a gaping hole in the group? HMMMM - time will tell.

I do have a question about said gaping hole for Barry. It looks like you also removed part of the slanted surface above the group (where the infamous E61 screw resides) so that you could locate the gaping hole as flush as possible to the group housing. Is this the case, or is this a different group design?
Sean
Top

Actually those are Greg's pictures, not Barry's. I was considering a similar modification and he was kind enough to explain his setup in a note:

gscace wrote:The thermocouple is a type T probe that you can buy from Omega. It's an ungrounded 1/8 diameter, "Rugged Junction" probe, 1.5 inches in length, with regular Teflon leads. The probe has a metal oxide ceramic insulating core. Part number is TJ36-CPSS-18U-1.5. I got mine with stripped ends, although you could get it with a quick connector as well. Omega sells mounting fittings that look like a Swagelok connector. They're called Omegalok compression fittings. The right part number is SSLK-18-18. The connector is 1/8 NPT male on one end and compression fitting on the other. You slide the probe into the group to the depth that you want it to go, then tighten the compression nut. I used a Fuji PXR3 temp controller to read the thermocouple. The response time is fast enough to be meaningful. It seems that you have a datalogger already, so you could just as well use it.

As you thought, he milled and tapped the grouphead to place the probe.
Dan Kehn
Top

That's not your average E61 in that picture. What make is it?

Actually, may not even be a "real" E61 as it apears not to have a expansion chamber. Also, that's the first E61 group I've seen with a flat top and a rough lower casting..

Is there a way to 'snake' the TC further down the channel into the dispersion area (taking the 90' turn)? I don't know how much room is in the channel, but a small TC shouldn't impede flow too much??
Geoff
Top

Abe Carmeli wrote:So, you are facing an unknown: how would it be influenced by the grouphead, especially when grouphead temp varies considerably pending on idle time and flushes.

In theory, a properly tuned thermosyphon holds the grouphead temperature (average) pretty darn close to the target brew temperature. Many people seem to be under the impression that the grouphead temperature is all over the map depending on usage. I've not done anything like Bruce's isothermic modeling, but it seems to me that if you're doing your flushes correctly (i.e., clearing the HX of overheated water and then bringing the group back to temperature from its transitory spike), the grouphead will pretty much "take care of itself." Now if you (stupidly) did half-flushes and waited a little bit several times in succession, I would expect the average grouphead temperature to rise.

Of course, some measurements with the Cannonfodder and Scace Devices on the same machine using a dual logging thermometer would answer this question definitively. However, it is fun to speculate about the results in advance.
Dan Kehn
Top
← Back •
By accessing this site, you agree to the site's terms of service. If you need help with the site, please contact us.