Since moving into my new house I've noticed decreased steaming performance and recently a stuck pressurestat. The water here post filtration is 120ppm TDS so I figured we were good to go and never bothered to check actual hardness. I had descaled a couple of times at the machines previous residence and there was never more than a few bits of scale on the shroom.... THE HORROR!!! 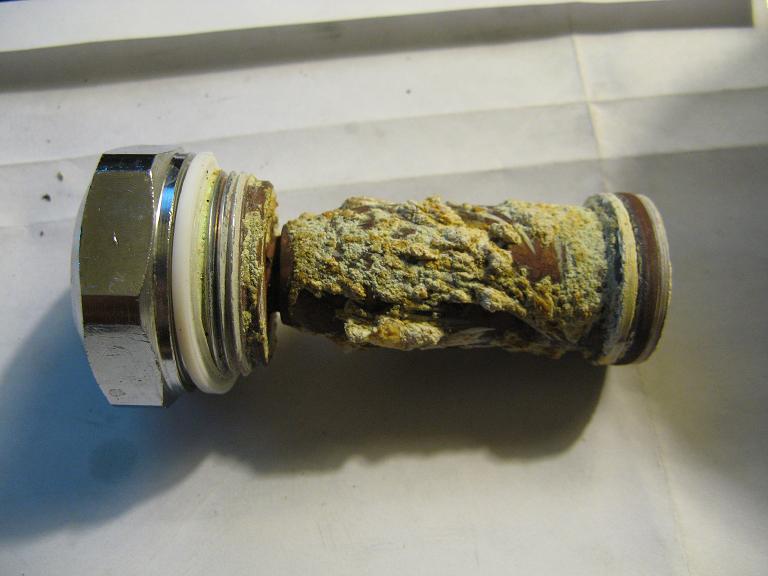 So it looks like I'm in for a total tear down.
Top

Thanks for sharing the photo, it dramatically shows why water treatment is necessary. Please let us know how the story ends with "after" photos.
Dan Kehn
Top

ok so this is not a comforting thing to look at.

it seems that my softener that i got from chris that was supposed to last a year, lasted about half of that. my machine has quietly been building up the scale, i think it has at least. i will be pulling out the mushroom to see the horror.

i will be changing the softener cartridge ASAP.

i think a descale is in order but im a bit afraid of it cuz chris said i shouldnt. i have descaled my pulser before but this one is a rotary pump that is plumbed in.

ahh.. geez everyone make sure your softener is still doing its job.

Chris has a table with the water softener that lists how many gallons of water it will soften vs. the hardness of the water input. If you are an OCD grouphead cleaner like me, I would imagine you can push water through the filter a LOT faster. I would expect to have to replace or recharge that softener more like every 6 months unless your water was relatively soft anyway.

The best advice I can think of with an ion exchanger softener is to check the hardness at least once a month. the Aquarium Pharmaceuticals GH test that you can get usually at a pet store will last you a long time, even if you are testing every month. I would come up with a routine that, on the first of each month (or something like that), before your machine goes on, run some cold water through the group, enough to flush out the water from inside the heat exchanger, and then fill up a test tube and check it. If it takes you more than 3 droplets to neutralize the water, it's time to replace your softener cartridge, or time to recharge it.

One thing that I have been wondering is, do you really need to replace Chris' ion exchange filter? seems like you could saturate some warm water with potassium salt and soak the cartridge in it. I can imagine that this wouldn't get the filter back to full steam, but I could see it lasting another few months. I am planning on trying it out and testing it when mine starts to wear out.
Nicholas Lundgaard
Top

well thanks. that is what i was doing but not frequently enough. oh well.

so now i am here with some new filters coming. i am curious to see the scale build up inside. i know that i can pull the mushroom out. but what can go wrong? i dont plan on pulling it out everyday but i still feel a bit apprehensive about pulling out at all. i may just do the de-scale and not even look in there. we all know what happen to the curious cat. i dont want to chip off a big piece of scale that screws up something down the line, when i take out the mushroom.

so i guess i have a few days to think about it.

thanks for your time.

Taking out the mushroom is a relatively safe exercise. Taking apart the lower half of the E-61 assembly is pretty simple if you have to clean it out, which is unlikely because its got good sized pathways. Removal of the shroom isn't any more likely to dislodge a chunk of scale than decaling itself plus it gives you an idea as to how much descaling you need to do. Initially I had planned on pulling the heating element to get a better look inside the boiler but the whole chassis was flexing pretty badly so I left it alone.

EDIT: Found my old post on CG from when I first popped the shroom out in '06. The post says I had descaled twice in the past 6 months, but I don't think thats what I really meant. Maybe I meant backflushed...Whatever I did, I certainly didn't use a descaler.

So this is three years buildup with no softening (pur pitcher only) on pittsburgh city water. Wherever my water is coming from now its apparently much harder since I've gotten 5x the scale in 1/6th the time. 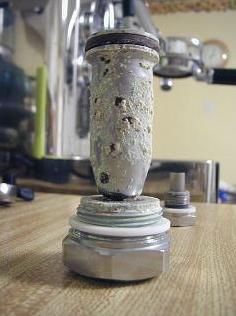 RegulatorJohnson wrote:i think a descale is in order but im a bit afraid of it cuz chris said i shouldnt. i have descaled my pulser before but this one is a rotary pump that is plumbed in.

And, for sure, in the case of the Vetrano, he is absolutely correct. The size of the pump's suction hose (tubing) on the Vetrano is 5x3 mm. That's 5 mm OD and 3 mm ID. If you try to "suck" descaling solution from some static tank/reservoir through that tubing, you will wreck the pump.

I thought I had a solution - see attached pic of descaling kit - but APPARENTLY my little pump is not strong enough to overcome the check valve that is screwed into the entrance to the hx. 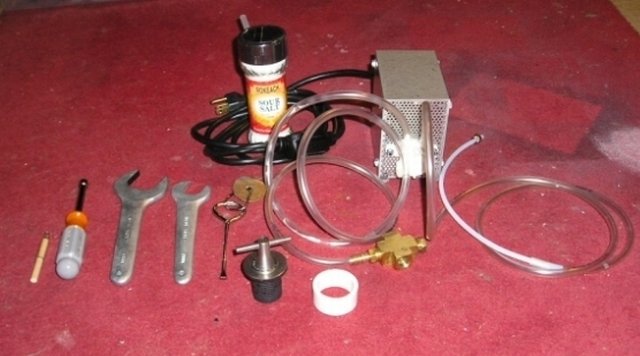 It's back to the drawing board as the intent is, of course, to make this kit as simple (and as totally complete)as possible for the typical user.
Skål,

I think at the very least I should check the shroom and see what I an dealing with as far as build up.

Thanks for your time.

RegulatorJohnson wrote:I think at the very least I should check the shroom and see what I an dealing with as far as build up.

Well, sure, that is easy.

That is true as far as I have heard WRT the Vetrano pump. Would a syphon setup be enough flow to avoid cavitation? Ex. stick a reservoir above the machine with a feed line running to it from the pump. It wouldnt have positive pressure but it wouldn't have to pull a 3 foot head either. I'm speculating though.

If that isn't an option you could always hook the vibe from the pulser up instead of the rotary. You would want the reservoir above the vibe pump in this case too. Not sure about the fittings required though.
Top
← Back •
By accessing this site, you agree to the site's terms of service. If you need help with the site, please contact us.